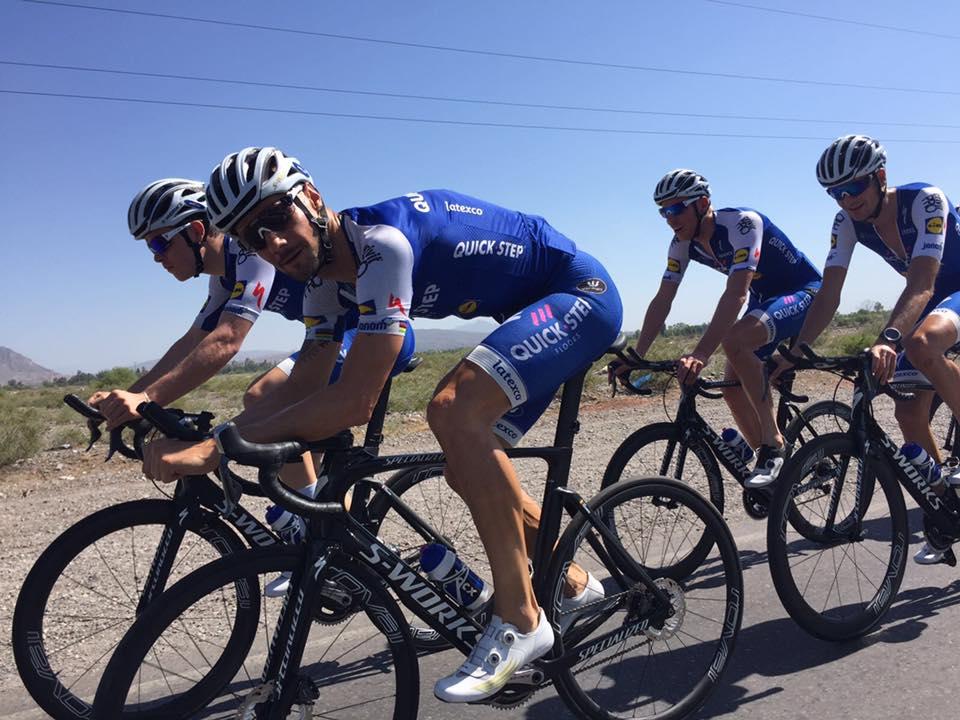 Lotto-Soudal’s Adam Hansen has weighed into the disc brakes debate by pointing the finger at US bike brand Specialized for trying to force the controversial technology on the peloton.

The Australian has been competing this week in the Abu Dhabi Tour and was the designated representative of the professional cyclists’ association the CPA on the race, which finishes today.

Two UCI WorldTour outfit currently have Specialized as bike sponsor – Bora-Hansgrohe, which has world champion Peter Sagan on its roster, and Quick Step Floors, whose line-up includes one of his predecessors in the rainbow jersey, Tom Boonen.

It was one of Boonen’s team mates, Marcel Kittel, who was in the news following the opening stage of the Abu Dhabi Tour, however, when Team Sky’s Owain Doull claimed that in a crash one kilometre from the line a disc brake rotor from the German sprinter’s bike had “sliced through” his shoe “like a knife.”

Overhead camera footage suggested there was no contact between Doull and Kittel’s bike, but the following day the Quick Step Floors rider switched to conventional brakes “out of respect” for his fellow professional cyclists.

The UCI reintroduced its trial of disc brakes this year after it was suspended following 2016's Paris-Roubaix, where Movistar rider Fran Ventoso blamed one for a deep cut to his leg sustained during a crash.

While disc brakes are now required to have rounded edges to reduce the risk of injury, the CPA has said that most of its members are opposed to the technology in its current form and want to see further protective features such as covers introduced.

Hansen, making it clear he was speaking in a personal capacity and not on behalf of the CPA, believes that there is pressure from manufacturers to get disc brakes into the peloton, singling out Specialized.

He told SBS: “I do believe – and this is just my opinion – that Specialized is pushing.

“Tom Boonen was against disc brakes last year, now he’s retiring this year and loves them.”

His own Lotto-Soudal team’s bike sponsor Ridley now produces disc-braked versions of its Noah SL and Fenix SL models, but Hansen said: “We’ve got bikes where we can have disc brakes, none of us want to use them.

“The other teams, they all have the option to use them but no-one is. I don’t want to be picking on sponsors or anything, but this is Specialized riders that are using them.”

The 35-year-old, who at the Vuelta last September completed a record 16th consecutive Grand Tour, revealed that the CPA was also concerned about the legal implications of disc brakes, with the riders’ union discussing the question of where liability would lie in the event of a an incident.

He said: “If you look at it as the riders are saying we’re against it, the UCI allows it … what happens if a rider did have a fatal injury from it? Who is liable for that damage? It can’t be Kittel that’s for sure.

“But if the UCI deemed it safe and it turns out it wasn’t safe in some sense, to me it seems the UCI is liable for it.

“From the industry side, I do think the bike manufacturers are pushing for it,” Hansen continued.

“They have brought it out. I know the fans they want to ride what the pros are riding, we’re not riding disc brakes and all the top line bikes [are] now with disc brakes, so in that sense I do know the manufacturers do want the riders to use disc brakes.”

He added: “It’s not that we don’t want disc brakes, or improvement in bike manufacturing, it’s just put a cover on them and then were all happy.”

> Video: Road disc brakes; what will they cut? road.cc takes an unscientific approach