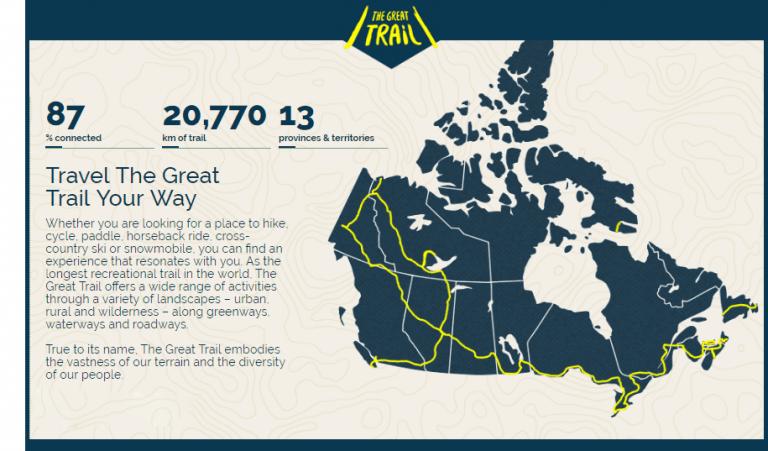 24,000km cross-Canada cycle route almost complete - but is it as good as it looks?

Canadians will be able to traverse the entire country on two wheels by 2017, say organisers
by Sarah Barth

Canada could be linked from end to end with a 24,000 kilometre network of multi-use trails suitable for biking by the end of 2017.

The project, the Trans Canada Trail – The Great Trail – has been more than 25 years in the making, and connects a current total of 20,770km of car-free routes, standing at 87 per cent complete.

An interactive map of the trail shows which sections are completed, and which still require further negotiations to open.

Pioneers of the project said: “Our dream of a cross-country Trail is rapidly becoming a reality.

“Our bold goal, nearly 25 years in the making, is being achieved with the help of our partners, donors and all levels of government.

“Once connected, The Great Trail will consist of nearly 24,000 kilometres of multi-use trails, linking Canada and Canadians.

“Moving beyond 2017, Trans Canada Trail’s mission will be to continue to enhance and improve the Trail by garnering support and continuing to nurture valuable relationships with Trail enthusiasts and partners across the country.”

It’s now the world’s single longest network of recreational trails, having begun construction in 1992 and is scheduled to be completed by 2017, just in time for Canada’s 150th anniversary.

But some users say that there are still lots of concerns to be ironed out - hardly surprising in a project of this scale.

Richard Roussey, from British Columbia, said: “On the face of it, it seems like a dream come true.
“The reality not so much. To date it is a hodge podge of local trails, some paved, most not paved. Some limited to bikes and pedestrians.

“Some are 'Oops, you have to use the highway for 35 kilometers because...canyon'

“One section that I know of close by was arbitrarily designated part of the trail, but is actually prohibited to bicycles!”

Jim Hatherly added: “The TCT is a sad version of a noble vision. I have experienced, in Manitoba, much of what you described - erratic, broken up, unpredictable, shredded in places and almost impossible to find in others.”

And Lynda Kavanagh said: “We cycled some of this a few years ago and the shale was so thick it was like riding uphill.

“I've cycled about 35,000km in Europe and what is being offered here is not a bike trail, great for hikers but not for biking other than for a recreational ride.”