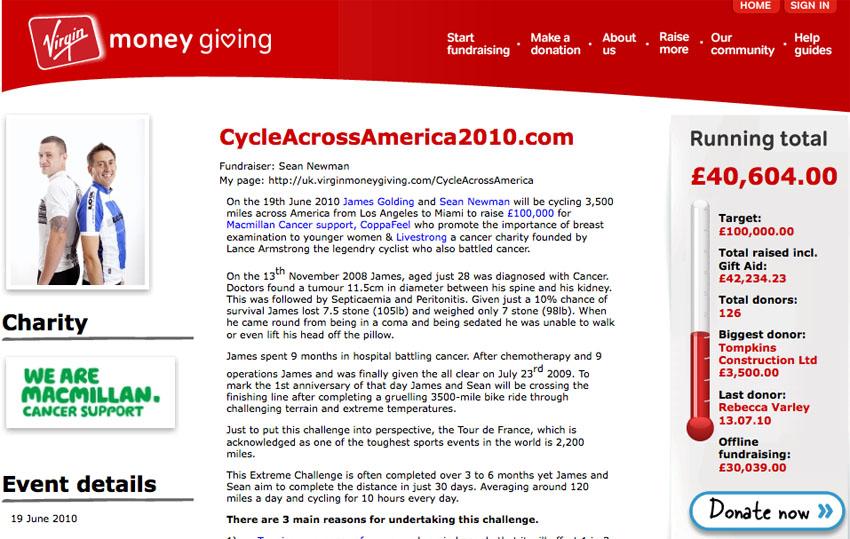 Another charity cycle ride ended in disaster at the weekend when a truck hit two Rugby men cycling across America.

Sean Newman, 43, broke his back, legs and pelvis in the crash. His companion, 29 year-old James Golding, suffered suspected broken ribs and cuts.

According to the Coventry Telegraph, the two men were hit from behind on the Interstate 90 near New Orleans last Saturday.

James Golding overcame cancer a year ago and he and his friend were riding to raise £100,000 for three cancer charities to help others with the disease.

James told the Coventry Telegraph, ““We were travelling down the I90, about 45 miles west of New Orleans, when a truck hit Sean from behind at 70mph launching him into me. After sliding down the road we both came to a standstill on the verge.”

The pair were two thirds of the way through a 3,500-mile coast to coast ride that they were hoping to complete in a month. They are raising money for Macmillan Cancer Relief, CoppaFeel and Livestrong.

In November 2008 doctors found a grapefruit-sized tumour between James Golding’s spine and his kidney. He was given just a ten per cent chance of survival and lost more than half his body weight during treatment but after nine months in hospital he was given the all clear.

James told the Telegraph, “I am now begging everyone we know and everyone you know to help us raise our target of £100,000. After our accident we are both very lucky, Sean more so, to be here. What will really boost Sean’s spirits and recovery is seeing the balance of money going up.”