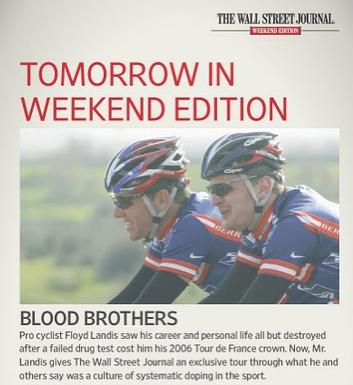 As Lance Armstrong prepares to get his campaign to win an unprecedented eighth Tour de France under way in Rotterdam this evening, the Wall Street Journal has published fresh allegations of drug use against the Team RadioShack rider by former US Postal Service team-mate Floyd Landis.

The fresh allegations have been flatly rejected this morning by Armstrong, who says Landis, who belatedly admitted drug use folowing a protracted legal battle to try and clear his name after being stripped of his 2006 Tour de France title for doping, is “a person with zero credibility.”

Besides detailing the alleged use of testosterone patches and the blood boosting agent EPO among members of the former US Postal Service team, the article, headlined Blood Brothers, timed to gain maximum exposure by coinciding with the start of the world’s biggest annual sporting event, also recounts details of parties attended by Armstrong and other riders supposedly involving cocaine and lapdancers.

The report, which you can read in full here, goes on to claim that some riders, including Landis, had to make do with sub-standard frames after those supplied by Trek were reportedly sold to help raise cash, with Landis saying that Team Manager Johan Bruyneel had told him that the money raised was used to finance the team’s doping programme.

According to The Wall Street Journal, Robert Burns, Trek's General Counsel, told it that the company knew that bikes intended for team use had been sold, but added that the company had no knowledge of how the funds raised were applied. "Occasionally, you'd see a bike on the Internet somewhere where it would surprise us," he explained.

"We didn't want to see that stuff getting sold on the market. It should be going to a better use than that," he continued. Mr Burns would not tell the newspaper whether or not Trek had been approached by investigators.

The central focus of the article is, of course, on claims that doping was common practice within the US Postal Service team, and it highlights one alleged instance during the 2004 Tour de France when Landis, together with Armstrong, Luis Rubiera, now with Team RadioShack, and George Hincapie, who rides in Rotterdam this evening in the colours of BMC Racing, were given blood transfusions in a darkened hotel room during one of the rest days.

Landis claims that his drugs use was encouraged and facilitated by Team Manager Johan Bruyneel – who now heads up Team RadioShack – as well as Armstrong, and included the use of testosterone patches, which handed to him personally by the Texan, and EPO, with the treatment initially administered by the Italian sports physician Dr Michele Ferrari.

The newspaper said that it had contacted Armstrong, Bruyneel and others ahead of publication of its article, but they had so far declined to comment, although Armstrong has subsequently issued a statement via Bruyneel to the Associated Press in which he once again roundly rejects Landis’s claims.

Landis, said Armstrong, is "a carton of sour milk: once you take the first sip, you don't have to drink the rest to know it has all gone bad."

The statement continued: "Today's Wall Street Journal article is full of false accusations and more of the same old news from Floyd Landis, a person with zero credibility and an established pattern of recanting tomorrow what he swears to today."

It added: "For years, sensational stories based on the allegations of ax-grinders — have surfaced on the eve of the Tour for publicity reasons, and this article is simply no different."

Armstrong, clearly tired of the continued speculation surrounding what may or may not have happened behind closed doors in his US Postal Service days concluded by saying: "Lastly, I have too much work to do during this, my final Tour, and then after my retirement in my continued fight against cancer, to add any attention to this predictable pre-Tour sensationalism."

What may give the Texan cyclist cause for unease should Landis be telling the truth is perhaps the most intriguing revelation in The Wall Street’s Journal Report; the newspaper claims to have spoken to three other former US Postal Service riders who have told it that doping went on in the team at the time it was led by Armstrong.

There’s no hint as to the identity of those riders, and the newspaper does point out that other former team members have said that they never saw any such activity.

However, US investigators including Jeff Novitzky of the Food & Drug Administration, the man who exposed previous doping scandals involving such high-profile names as Olympic athlete Marion Jones and baseball stars Barry Bonds and Roger Clemens, will doubtless be eager to talk to them, if they haven’t already done so.

The presence of independent witnesses who may be prepared to come forward to confirm his allegations won’t be welcomed by Armstrong or the other individuals named by Landis.

Should the latter be required to testify at any hearing, cross-examination would in part focus on inconsistencies in his story, and whether someone whose account of events had changed over time, including his past denial of his own drug use, could be trusted as telling the truth now; introduce other witnesses with no such history, however, and the allegations become harder to rebut.