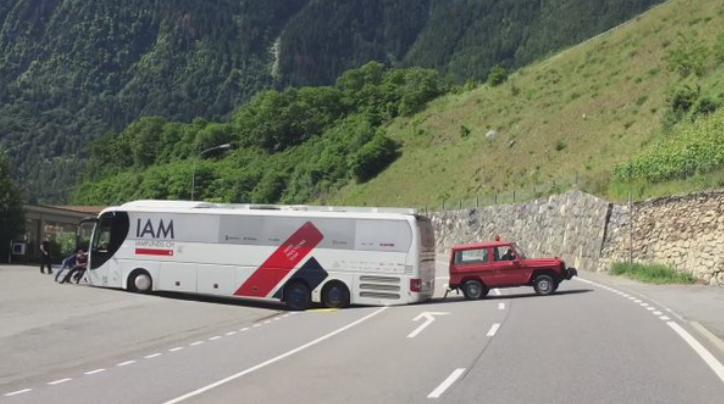 "Hang on a minute lads - I've got a great idea"...
by Simon_MacMichael

If there’s any WorldTour team whose bus driver might be expected to know the roads in Switzerland better than anyone else, it’s IAM Cycling – they are, after all, based in the country.

So you can imagine the driver’s embarrassment yesterday when the vehicle got very firmly stuck on its way to the start of yesterday’s Stage 4 of the Tour de Suisse.

Sports director Rik Verbrugghe tweeted a picture of the vehicle, wondering whether he and the team's riders would make it to the stage start – happily, they did.

Do we arrived on Time today @tds pic.twitter.com/Ojs3Vy89tr

The team also posted a video to Twitter that showed a recovery vehicle trying to tow the bus away, with a few members of staff trying (unsuccessfully in this instance) to give the front of the vehicle the old heave-ho to get it moving.

We did that this morning.

Inevitably, a number of comments alluded to the time the Orica-GreenEdge bus infamously got stuck under the finish line gantry on the opening stage of the 2013 Tour de France in Corsica, with some wondering whether the Australian team’s driver at the time is now with IAM Cycling.

Vittel, you owe me an absolute fortune! #marketing #pr pic.twitter.com/cLYmxJZQu7

There was another tight squeeze for the Orica-GreenEdge bus at last month’s Giro d’Italia, as this picture shows.

Of course, it's not the first time we've seen a bus stuck in the Alps ...