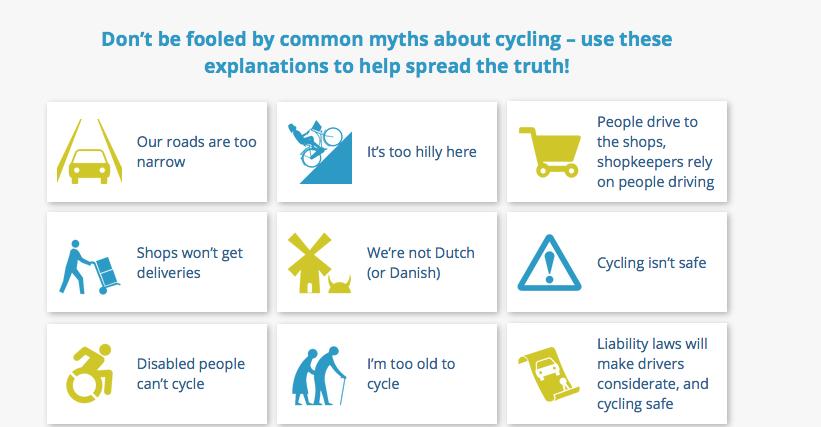 The campaign group The Cycling Embassy Of Great Britain has launched a new website aiming to be a ‘one stop shop’ to support campaigners for active travel and better towns and cities across the country.

Cycling Fallacies lists many of the arguments commonly given for not providing high quality, safe space for cycling, and debunks each one in plain and simple language - with links for further reading, and supporting images.

Chair of the Cycling Embassy Mark Treasure said: “We get regular enquiries about all sorts of well-known myths, misinterpretations and misunderstandings - not paying road tax, not being Dutch, and so on. We looked at the ‘Your Logical Fallacy Is’ site and really liked it, so thought a cycling equivalent would be a great idea.

“We hope the clear explanations of why such claims are mistaken will make this new website a great resource for people who come up against the same arguments time after time. We also hope it will enable people to engage in positive debates about cycling as a mode of transport for the future.”

New Cycling Chair Katja Leyendecker said “This tool will really free up our time for the important stuff! It's so vital for campaigners to keep a good focus, be able to deal with distractions quickly and accurately, and debunk time-wasting spurious claims effectively. The Cycling Fallacies website will enable us to spend more of our volunteering time on positively campaigning for change."

Common cycling fallacies include the complaint: “Our roads are too narrow to build cycle lanes on.”

It is true that some roads may be too narrow to accommodate cycling infrastructure, alongside other uses like parking and multiple lanes for motor traffic.

However, it may well be the case that cycling infrastructure is a more beneficial and productive use of road space than parking bays on both sides of the road, or multiple lanes of motor traffic. A road can be made one-way for motor traffic, for instance, or one of two rows of parking on both sides of a road could be changed.

In short, in practical terms, there isn't any road - narrow or wide - that can't be made safe and attractive for cycling.

Another is that: “Cycling facilities cost a lot of money and are a poor return on investment”.

The site says however:

Good cycling infrastructure does cost money, but it is incorrect to say it is a large amount in the scope of overall transport spending, or that it is a poor return on investment. Cycling infrastructure has been shown to pay back to society more than it costs - a 2014 Department for Transport report cited returns of between 2:1 and 35:1.

Other countries demonstrate returns of 10 times or higher, and Transport for London reports ratios of 20:1 for cycling investment. Whilst many of the UK figures are for 'general' investment in cycling (i.e. training, etc.) the higher cost of cycling infrastructure is still justified because of the additional numbers drawn to cycling by the provision of safe places to cycle. The Netherlands spends €500m per year on cycling infrastructure, which generates €31bn in health benefits alone - a 60:1 return on investment.

The site is also calling for suggestions for additional fallacies, links to add to existing fallacies, or corrections. Click here to get in touch.