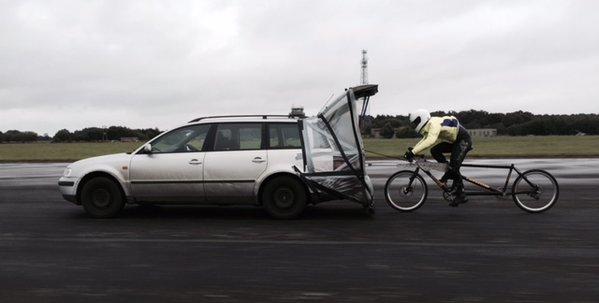 A team from Essex has broken Guy Martin’s British and Commonwealth cycle speed record, raising money for the British Heart Foundation in the process. Working to a tight budget with homemade equipment, Operation Pacemaker had guaranteed they would set a record of some description – if not for speed then for “the longest face plant.”

The new record of 114.19mph was set at Elvington runway in Yorkshire last week. The team comprised Neil Campbell, who rode the bike, and Dave Le Grys, whose motor-paced British record of 110mph stood for 27 years until it was broken by Martin.

Campbell lost his mother in 2012 due to a previously undiagnosed heart condition, while Le Grys underwent open heart surgery last June after learning that he had a leaky heart valve which under stress was pumping more blood into his lungs than his legs. Le Grys has since returned to bike racing. You can find their Just Giving page here.

Guy Martin set the previous record of 112mph on the Pendine Sands as part of his TV series Guy Martin on Speed. He did what the Operation Pacemaker team described as a ‘proper job,’ calling on all manner of experts, including a top truck racing team.

In contrast, Operation Pacemaker relied on a 20-year-old converted tandem found in a garage, with functional additions such as a walking stick, scrap car parts, scrap metal, knicker elastic, exhaust mounting rubbers from a 1989 Ford Escort and an ex-RAF parachute. The pacing vehicle was a 1998 Diesel VW Passat.

This was Campbell’s view of it.

After a failed attempt late last year, those involved concluded that the car wasn’t quick enough. As such, the successful attempt saw the very same pace car being paced by a pace car of its own.