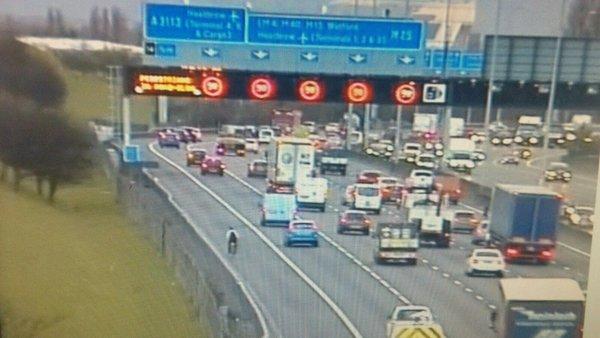 Police in Surrey have fined a cyclist they found cycling on the M25 as he headed for London Heathrow Airport along the hard shoulder of the busy motorway. The man had earlier been told to get off the motorway by Highways England officials.

A video of the rider, a man aged in his 30s from Feltham, was posted to YouTube by Surrey Police, who said:

It was reported that the man was initially traveling along the hard shoulder of the anti-clockwise carriageway between junctions 11 and 13. He was escorted off the motorway by Highways England officers and given guidance for an appropriate route.

A short time later the cyclist re-appeared on the slip road of the clockwise carriageway of the M25 traveling in a clockwise direction between junction 13 and 14 before continuing his journey on the spur road to Terminal 5 of Heathrow Airport. He was stopped by officers from Highways England and an officer from Surrey Police Roads Policing Unit was called to assist.

PC Tom Richardson of Surrey Police said: "As well as cycling along an extremely busy motorway during the rush hour traffic the cyclist would have also crossed motorway slip roads so it is extremely fortunate that there was not a more serious outcome to his trip.

"The act of cycling on the motorway hard shoulder is clearly reckless and dangerous and the man not only put his own life at risk but other road users too.

"A cyclist coming towards you on your morning commute on the M25 would be completely unexpected and could cause alarm - another example as to why motorists should remain alert and vigilant at all times."

"If we get reports of people cycling on motorway we will intervene and further action may be taken."

Martin Crosswell, Highways England Operations Manager added: "Safety is Highways England’s number one priority so it is important that all road users follow the Highway Code and listen to the advice given out to them by our team of Traffic Officers.

"The actions of this man were irresponsible and could have caused a serious incident."

Earlier today, Surrey Police’s road policing unit had tweeted a picture of the cyclist that by 3pm had received around 100 retweets and likes on the social network.

A cyclist has just received an on the spot fine after being caught cycling on the M25 trying to get to Heathrow. pic.twitter.com/OVxLjE8F6y

Bicycles, along with some other types of vehicles, as well as pedestrians and horse riders, are banned from motorways under Rule 253 of the Highway Code:

Police said on Twitter that while cyclists aren’t the only people they find using motorways who shouldn’t be there, tweets about people on bikes there do seem to get more attention.

“We regularly find cyclists, pedestrians and vehicles that are restricted from use on a motorway. Like other offences we tweet them,” they said.

“Whilst the cyclist did put his self at danger and knew this, we Tweet daily about other road users putting their self, and others in danger.

“The other road users don't always seem to get the same amount of RTs, likes or comments. All road users need to drive/ride/walk safe,” they added.

A number of cyclists have been caught riding on the M25 in recent years, including a 74-year-old woman who in August 2014 was fined by Surrey Police for apparently using the motorway as a short cut.

A fortnight earlier, members of the Sri Lankan team training for the Commonwealth Games in Glasgow were spotted by 2012 triathlon world champion and Olympic bronze medallist Jonathan Brownlee riding on the hard shoulder of the M74.