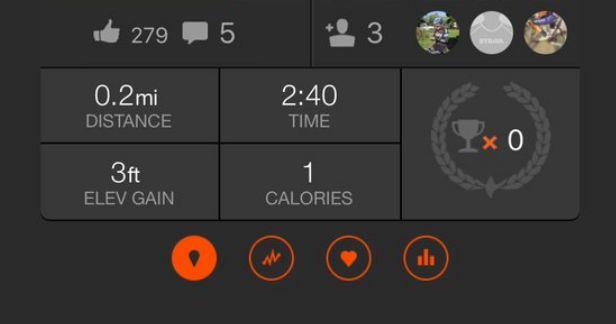 Are YOU a Strava Wanker?

Are you a Strava Wanker? Well, if you’re given to over-sharing on the popular running and riding cycling app and website, post improbable achievements or are simply careless in switching settings between different activities, you may attract that accolade thanks to the @stravawankers Twitter feed.

Dedicated to unearthing “terrible attempts at Strava’ing,” the feed now has getting on for 2,700 followers, guaranteeing those appearing on it 15 minutes – or more likely, in these short attention span times, 15 seconds – of internet fame.

While much of the focus is on running, even former world champion cyclists aren’t immune from scrutiny – witness this recent 'effort' from Team Sky’s Michal Kwiatkowski which got kudos from more than 600 fellow Strava users.

Who are these 630 people?! They all need a serious talking to! The Strava rule is anything under a mile = no Kudos! pic.twitter.com/xuIkUKNHvR

Then there’s Belgian pro Oliver Naesen, who rides for IAM Cycling, and replied to @stravawankers to explain why something weird had popped up on his Strava page.

It’s not just pro cyclists either who are under scrutiny, and while it’s good to log all your rides to keep track of your cumulative totals for the year, for example – although in some cases, you may get a bit of kickback.

Mind you, if that’s Dominic himself in the avatar, meaning it's his account and not, say, his dad's, he probably does deserve some kudos for the ride.

At the opposite extreme, while most Garmin owners probably logged a car ride or train trip when they first got it just for the hell of it and to see some big numbers appear on the display, posting a flight to Strava (after missing the announcement to switch of electronic devices, presumably) and calling it a bike ride is a bit off.

Movistar pro rider Alex Dowsett –British time trial champion and former UCI Hour Record holder – has also made it onto Strava Wankers, although he doesn’t seem to mind what others think.

@stravawankers I do what I want

He chipped in again after another more recent activity – this time on a bike – was flagged up on the Twitter feed.

Other non-cycling or running related activities from less heralded names include this skate round the ice rink at London’s Somerset House.

A fair few posts on the Twitter feed highlight the problems caused when Strava (or its users) get confused between running and cycling, leading to loss of CRs – Course Records, the equivalent of a KOM or QOM when no pedal power was involved.

This particular one made us chuckle due to the name of the new CR holder, shared with the 1988 Olympic 100 metres champion who was stripped of his gold medal after failing a drugs test.

So a guy called Ben Johnson stole my Strava "sprint" CR. No drugs needed for this one, as he was on a bike! #cheat pic.twitter.com/SPzZxNCyB0

The @stravawankers feed is of course tongue in cheek – and from some of the posts to it, appearing there can be a kind of badge of honour to some users – but in many cases it highlights the addictive nature of Strava, as you’ll find from plenty of the activities you’ll see there when scrolling through it.