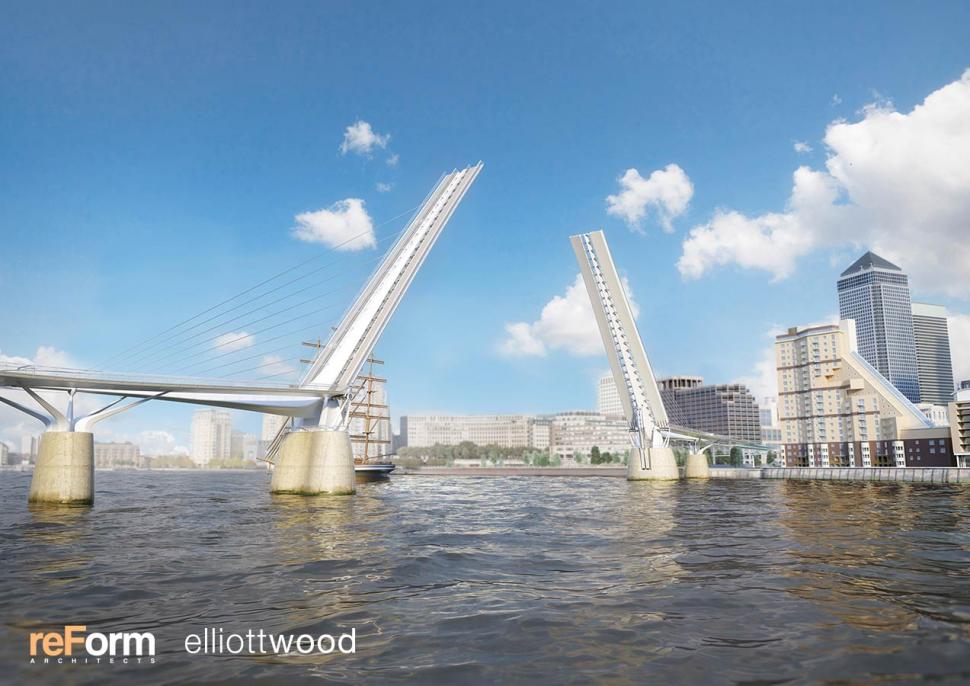 New bridge between Rotherhithe and Canary Wharf would see over 10,000 cycle journeys a day according to Sustrans

Sustrans says that a new bike bridge over the Thames between Rotherhithe and Canary Wharf would take major pressure off London’s public transport network. A feasibility study published by the charity shows that a new bridge would see 10,200 cycle journeys and 3,000 walking journeys a day: the equivalent of 15 full Tube trains or 160 buses full of passengers.

Writing on the Sustrans website, Sustrans London deputy director Matt Winfield says that a third of London’s growth to 2030 is set to happen in the east, beyond Tower Bridge. This includes a doubling in the number of jobs on the Isle of Dogs and over 4,000 new homes around Canada Water station – just a few hundred metres apart, but currently demanding huge detours for pedestrians and cyclists.

“All of these new homes, jobs and services will need better connectivity. To make this trip today is a choice between a fume filled tunnel, a packed tube train or a pricey ferry. There is a gap here between the commute these Londoners need and the commute they are forced to make.”

There are 34 bridges across the Thames, but only one is east of Tower Bridge. According to Winfield:

“A beautifully designed bridge will make cycling and walking a quick, clean and healthy alternative to a busy tube train.

“If we make it a pleasant, quick option then people will take it. The bridge could effectively empty 15 Tube trains or 160 buses. We need London’s Mayoral candidates to pledge to bridge the gap, starting with a design competition to find an exciting and attractive design."

In November, a ground-breaking design owing much to Tower Bridge was unveiled and was reported to be Sustrans’ preferred option.

“A new cycling bridge would ease the pressure on transport and make cycling an attractive option for thousands of people in a growing east and south east London. With bicycles now outnumbering cars on most crossings the bridge would also serve as a spectacular statement from the new mayor that cycling is a core part of the capital’s transport strategy.”

You can sign up to support the bridge on the Sustrans website, while the charity is also encouraging people to tweet about the project using the hashtag #bridgethegapLDN.

Transport for London has been working with Sustrans on this first phase of the project and says it has plans for a design competition later this year. It is also looking to explore ways in which public and private sector funding could be raised.