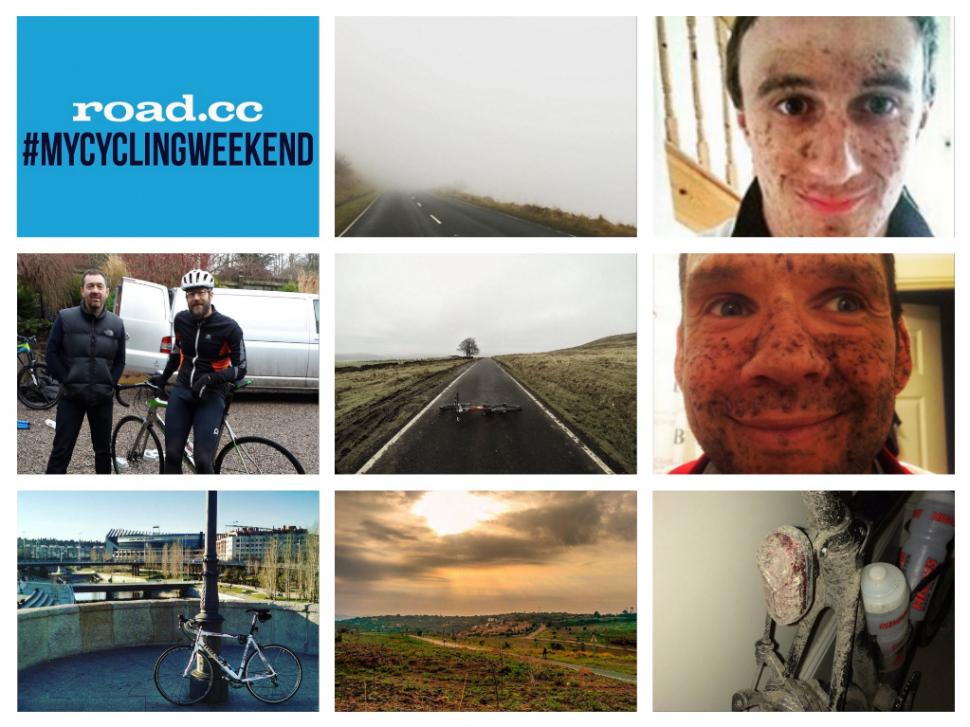 Team road.cc had a busy weekend + you battled through mud, picturesque countryside, and a little bit of snow
by Elliot Johnston

Here at road.cc we had a busy old weekend. We had a Team road.cc rideout taking place down in Swindon, a Boardman Bikes announcement event in Wales, and our own personal weekend rides to embark upon.

Fortunately, we weren't battling through the elements in what turned out to be a reasonably mild, if muddy, #mycyclingweekend for most of us.

We'll start in Swindon where Team road.cc took to Hargroves Cycles' headquarters for a day of cycle themed fun. Keep an eye out for a write up which, by all accounts, will report a resounding success.

You can join in next time by signing up for Team road.cc for the small fee of £14.95 per year.

Our two main men Tony and Dave, took road.cc to Wales this weekend and went riding on some Welsh hills with Mr. Boardman and his brand new selection of bikes.

You can read more about how they spent their time below, but if you're more interested in seeing a photo of Dave and Chris Boardman, as well as a great shot of the Welsh countryside, scroll a little further down.

Climbing . Up to Painscastle in the rain #mycyclingweekend

Seeing the light on the Gospel Pass (Can you spot Dave? ) #mycyclingweekend

They weren't the only road.cc members out riding this weekend. I took a spin around Madrid in 17°C sunshine and caught this great shot of Atletico Madrid's stadium, the Vincente Calderón, from a beautiful old bridge over Madrid Rio park.

Meanwhile, back in the UK, you lot were ploughing through mud, it appears. Sorry about that.

The sticky conditions didn't stop you all having a great time though. Just look at the faces on Ross and Dayle from their #mycyclingweekend Instagram posts. Those aren't guys who are sick of the mud.

110km done today with some guys way way faster than me A3-A1 ranked racers, literally the highest rank you can get in domestic racing in Ireland. Hung on the back for a while but did my stint on the front as well.
Played a little chase the breakaway, 4 very strong riders got a twenty second start before the rest of us chased them down, people dropped off one by one, as did I but only about 10 seconds before we caught the breakaway.
Very happy to have lasted so long in the chase, just before I was dropped and the rest of the lads caught the break a few seconds later it was me and an A1 and two A2s left. A good weekend spin all in all. #mycyclingweekend #cycling #cyclinglife #cyclingpics #cyclingphotos #bikephoto #bikepic #outsideisfree #fromwhereiride #fit #fitness #fitstagram #fitspiration #fitnessmotivation #fitnessaddict #fitnessaddict #fitfreak #fitfam #irishfitfam #irishfitness #dedication #consistency #trainmeaneatclean #trainhard #strava #stravacycling #stravaproveit #stravaphoto

Of course, your bikes didn't escape the conditions either. Patrick Toland and Duncan Alexander must've had some cleaning to do, while Jez Ash - of road.cc bike reviewing fame - took to the Jack and Grace Cotton memorial Audax in Bristol this weekend which left his bike filthy. Mr. Ash likes it filthy though, or so it seems...

#mycyclingweekend 75 miles in spray and mud.... bad news for those sitting on pic.twitter.com/wAyc4xskut

Of course, it's easy for us to look down when the roads are wet and muddy. Fortunately though, plenty of you looked up and caught pictures of some absolutely stunning scenery.

Have a flick through these and tell us you don't want to get out on your bike right now:

Seriously though, this part of the world is incredibly underrated. One of the best days I've had on a bike in a long time. Definitely this year anyway.

The thing I love about cycling in the Borders is the expansive views of the beautifully rugged landscape. #randovibes

We warned you last week not to take weather forecast advice from a cycling journalist. We hope you all used that advice when we predicted no snow on Friday. Especially if you're over on the east coast of America right now.

It turns out Japan had a bit of snow at the weekend. Instagram user iandagnall got to enjoy that one. We hope you're fully thawed now, Ian.

Remember, you can still get involved in this weekend's #mycyclingweekend. Simply post your photo in the comments section below, or fire it our way by popping the #mycyclingweekend hashtag into the caption or description for your photo on Instagram, Twitter, or Facebook.