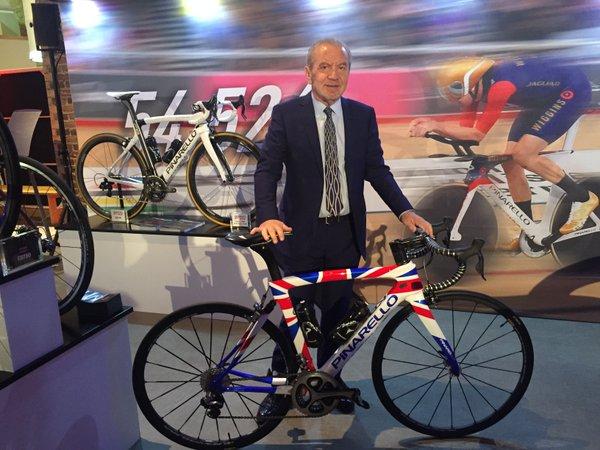 Alan Sugar with his custom Pinarello (image via Twitter).jpg

“I have a very simple principle when I’m on my bike. Any car in front of me, any car on the left or on the right is going to kill me”
by Alex Bowden

Lord Sugar has said that 99 per cent of London road traffic incidents involving cyclists could have been avoided if the victims had shown more ‘situational awareness’. The comments came as part of an interview with LBC in which he reiterated complaints about the traffic disruption caused by Cycle Superhighway construction works.

Earlier this week, Sugar – a keen cyclist who recently picked up a new custom Pinarello – suggested that Mayor of London Boris Johnson needed ‘a whack’ after he found himself sitting in traffic caused by Cycle Superhighway construction work on Lower Thames Street.

Speaking on LBC, Sugar challenged Boris to join him in his car for a morning commute to see for himself what the journey was like.

“I don’t know who drafted the construction of this thing in Lower Thames Street, but they need a good slapping,” said Sugar. “I think Boris himself needs to come to my house one Monday morning and we’ll drive in, okay, and he’ll be pulling his blond hair out by the time we get anywhere near Westminster.”

When it was put to Sugar that the Cycle Superhighway would help save the lives of fellow cyclists, Sugar said this was not the way to achieve that.

“The way to stop that is what I call ‘situation awareness’ and I say this with the greatest respect to the cyclists and to those that have been injured, and that is that you cannot cycle in the centre of London without being aware of the dangers.

“I have a very simple principle when I’m on my bike. Any car in front of me, any car on the left or on the right is going to kill me. It’s as simple as that. Any truck that is parked by traffic lights, I will not go down the inside lane of it. I will stay behind it and be patient because it’s going to kill me.

“And as long as you have that philosophy when you’re riding your bike in central London, I think that 99 per cent of the accidents that occurred would have been avoided.”

Almost as if Sugar the driver and Sugar the cyclist were different people, he then appeared to laud dedicated cycle paths when asked whether cyclists should be ordered to use them.

“I cycle a lot in France, for example, and I have to say that a dedicated cycle path is fantastic. There’s no question of it. It keeps you away from the traffic and you should use it,” he said. “I can’t understand the logic of anyone not using it.”