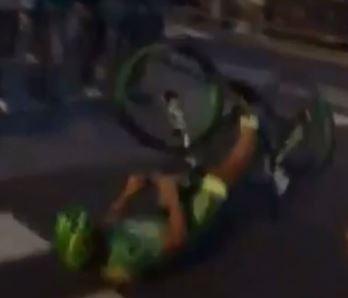 Video: Peter Sagan pulls a wheelie - and lands on his backside

Peter Sagan came back down to earth with a bump after clinching the points jersey at the Tour de France for a fourth year in a row – the Tinkoff-Saxo rider uncharacteristically landing on his backside after pulling a wheelie at a post-Tour criterium in Belgium.

The Slovak rider may not have won a stage in the Tour, but he outsprinted yellow jersey winner Chris Froome of Team Sky (yes, you read that correctly) to win yesterday evening’s criterium in Aalst, the 80th edition of the event.

One of the best bike handlers in the peloton, Sagan’s attempt at a wheelie for once went wrong, as this video shows.

The criterium circuit following the Tour sees some the stars of cycling’s biggest race mix it with top local riders amid what is typically a festive atmosphere.

The races of course are pre-scripted – Sagan getting away in a two-man break to contest the sprint is one thing, but Froome getting away from an eight-man group that also contained Etixx-Quick Step’s Iljo Keisse and LottoNL-Jumbo’s Sep Vanmarcke quite another – so the victor’s post-race comments have a certain tongue-in-cheek element to them.

“I’ve finally got my win,” said Sagan, reports Het Nieuwsblad, which also has a photo gallery of yesterday’s race.

“Maybe for me the Tour de France ended one day too early? I hope the ice has been broken and that this win is the start of a run,” he added.

Froome, who had returned home to Monaco on Sunday evening then flew to Belgium yesterday in a private jet with Sky team mate Nico Roche, said: “Finishing second to Peter Sagan is no disgrace,” adding, “It was an incredibly nice party here in Aalst.”

Referring to the atmosphere generated by the crowd, he said: “I feel the fatigue in my legs, but when you see all this here, that gives you wings anyway."