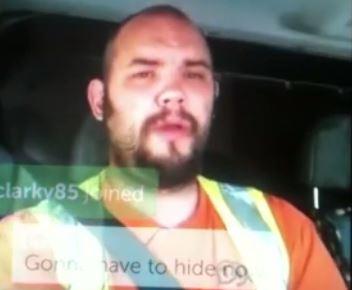 A free app from Twitter that allows users to livestream video is being used by drivers to interact with followers while at the wheel, including in the UK, as the footage below shows.

The practice has led a US lawyer to warn that footage could be used in court against a motorist as evidence in the event of a collision caused by the driver being distracted.

The Periscope app, which is available for both iOS and Android devices, enables people to broadcast a live video stream to followers on the network, who can interact with them by posting messages which appear on the user’s device in real time, making it fully interactive.

UK Periscope users who use the app while at the wheel include a driver from delivery firm TNT, who broadcasts his thoughts on a range of issues to his followers.

On Tuesday, during an 18-minute broadcast on the social network, he was asked by one person watching whether he was using it while driving.

He assures his audience that he is able to concentrate on the road while using the app, and also gives his views on cycle safety, although as the following excerpts from the video we captured before it expired on Periscope show, he does not appear fully focused on the road.

We alerted TNT to the usage of the app by an employee while driving one of its vans, and a spokesman for the company told road.cc: “TNT takes the issue of road safety very seriously and have strict policies in place regarding driver behaviour and the use of mobile devices.

“Thank you for bringing this incident to our attention and we will be investigating further."

Periscope is used by media organisations including the BBC, and Sky journalist Kay Burley used it to broadcast behind-the-scenes footage from the party leaders’ debates before last month’s general election.

Less serious uses, according to this article from the Guardian, include people sharing livestreams of the content of their fridges or their pets, with cats and pugs proving most popular.

But it’s users who stream video of themselves driving that is attracting concern, with a blog post from California law firm Appel & Co earlier this month highlighting the dangers.

“Our initial research reveals that too many people are using this app while driving,” says the post’s author, Thomas G Appel.

“Just a simple search on twitter for “driving periscope” demonstrates the huge number of users who are using this new app while behind the wheel.

“Many users who use the app while driving are without any passengers and often respond to written comments, indicating that the driver may just be looking for company or someone to talk to while driving. While this might seem like a cool idea at first, it is actually a very unsafe practice.

“The truth is that drivers who use the Periscope app are constantly distracted. They fiddle with their cell phone to initiate the live stream, adjust the stream, chat with viewers and pinpoint the perfect filming position.”

Appel notes that many of the app’s features “encourage the videographer to interact with his audience,” and says “while Periscope has the potential to revolutionise the manner in which people communicate through social media and video journalism, it should never be used by someone who is behind the wheel.”

He adds: “It won’t be long before a Periscope live feed will provide us with live footage of an automobile accident as it occurs in real time. It remains to be seen whether the video captured from these accidents could be used in personal injury lawsuit against a careless driver.

Since use of smartphones became widespread, road safety campaigners have highlighted the danger of motorists texting while at the wheel or surfing social media sites, with research indicating that it is more dangerous than driving while under the influence of drink or drugs.

Even those devices that are legally allowed to be used – hands-free mobile phones – need to be used in such a way that the driver is not distracted, otherwise they may face a charge of careless driving.