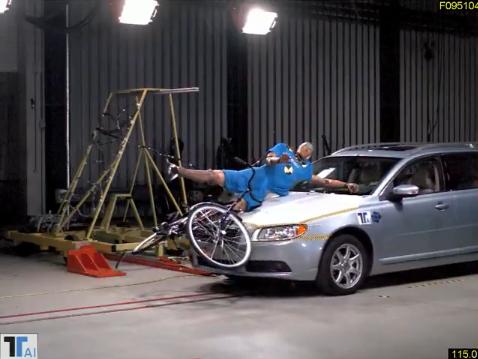 Cyclist-specific airbag system to be trialled in Amsterdam

One of the world’s leading automotive safety companies is to trial an airbag system to help protect cyclists in Amsterdam this autumn, which could lead to the device entering production with leading car manufacturers as early as 2015.

The trial, which will last a year, will assess the effect of the prototype system’s sensors in urban traffic, and will not see the airbag used in a real-life scenario, although ultimately it is hoped that it can prevent hundreds of cyclists across Europe from being killed or seriously injured each year.

Assuming it goes into production, the airbag would be mounted on the outside of cars and other motorised vehicles, with sensors deployed to identify when a cyclist is present and anticipate a collision. At that point, the airbag would be deployed, providing a cushion for the cyclist’s head to reduce impact and, by extension, the number and severity of injuries and deaths.

The system has been designed by Autoliv, a Swedish-American company quoted on both the Stockholm and New York stock exchanges that has annual turnover of $6.5 billion and which counts all of the world’s leading motor manufacturers among its customers. It has been partnered in the research and development of the system by Dutch safety research consultancy TNO Automotive, the Netherlands’ Ministry of Transport, Public Works and Water Management, and the Fietresbond, the Dutch cyclists’ union and an insurance company, Achmea.

According to an article in the March edition of Fietersbond’s magazine, Vogelvrije Fietser, which road.cc obtained thanks to Marc, owner of the blog Amsterdamize.com, who also made us aware of the trial in the first place, the system could be implemented for as little as €200 per vehicle.

Thijs van de Broek of TNO Automotive told the magazine that a transport organisation such as a parcel delivery firm that relies heavily on motorised vehicles in an urban environment is now being sought to help trial the system. “The intention is to ﬁt the system in cars that drive a lot of miles in the inner city,” he said, adding that the trial will focus on developing the system’s sensors to ensure that it is triggered when necessary, and not by accident.

“People must have faith in the system in order for the technology to be accepted,” explained van de Broek. “The airbag should never be activated without reason, but neither should it fail when it must be activated,” he continued, adding that depending on consumer and industry response, the system was expected to be made available in 2015.

Theo Zeegers, who is overseeing the Fietsersbond’s involvement in the initiative, described that as “an amazing result,” adding “we’ve come much further than we’d ever hoped for.” Zeegers called for the airbag system to be made compulsory in all new vehicles, saying: “Just compare it to the compulsory introduction of the catalytic converter.”

The Fietersbond is calling for the airbag to be made compulsory throughout Europe, and says that this would save “hundreds of road casualties a year.” However, it says that in order for research to be completed, some €2.7 million is needed. The Dutch Ministry of Transport, Public Works and Water Management has already pledged half that money, while the balance is expected to come from other national governments within the EU and from manufacturers such as Autoliv.

TNO Automotive believes that with European countries continuing to promote greener forms of transportation as a means of reducing car dependency, the case for the introduction of airbags designed to protect cyclists and pedestrians who are struck by motor vehicles is becoming more pressing. “‘The airbag is also highly effective in collisions with pedestrians, and more and more people start cycling in large European cities such as Paris, London and Berlin,” he stated. “This makes such an airbag system increasingly vital.”

The company has made footage of its tests using crash test dummies available on YouTube. The results of impact, even at relatively low speeds, are chilling. “I noticed that visitors were truly shocked during the crash tests,” said van de Broek, adding that “these crash tests are the last vital step in establishing the speciﬁcations for the detection system and airbag.”

TNO studies on an existing airbag system designed by Autoliv that is intended to protect pedestrians showed that it provided limited protection for cyclists, so the development of a dedicated system has been warmly welcomed by the Fietsersbond. “In collisions with passenger cars in which the cyclists dies, it is nearly always the head injuries that are fatal,” explained Zeegers. “That’s why we’ve been busy for years trying to ﬁnd out how we can make cars safer for cyclists.”

Its work in that area has included commissioning TNO Automotive to carry out a study four years ago that found that while side airbags could protect cyclists in the event of a collision, they needed to be placed correctly on the vehicle, and not necessarily where they would be located if protecting pedestrians were the primary concern, because unlike pedestrians, whose heads often hit the bonnet or lower part of the windscreen, cyclist head impact is higher up.

As to the effectiveness of the airbag, Vogelvrije Fietser cited Head Injury Criterion (HIC) data obtained as part of the testing process, under which values should stay below 1,000 or, for elderly people, 600. Research from TNO Automotive in 2008 found that in a 30kph impact, a cyclist would suffer an HIC of 3,700, making serious injury or death highly likely. With an airbag deployed, however, that dropped dramatically to 590, with the magazine claiming that “ all a cyclist will suffer from in that case is a headache and dizziness.”