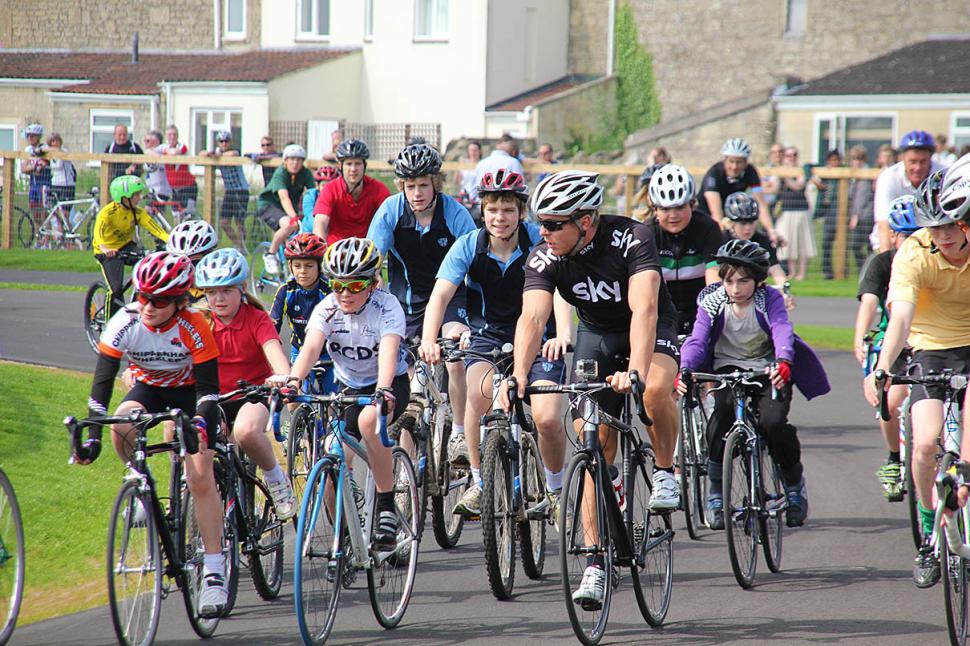 Hoy and Evans back British Cycling's Go-Ride programme with 1,500 bikes

Sir Chris Hoy and Evans Cycles have teamed up with British Cycling to supply 1,500 bicycles to help youngsters get into the sport through the Go-Ride programme.

The initiative, which has been going for more than a decade now, gives young people their first taste of competitive cycling and coaching, with 30,000 involved last year alone.

Hoy, whose range of bikes is sold exclusively through Evans, said: “Inspiring young people across the country to start cycling and realise how great it can be is something I really believe in.

“That’s why Evans Cycles and I jumped at the chance to provide HOY bikes for British Cycling’s Go-Ride programme over the next four years, and hopefully we can help find the world champions of tomorrow.”

Delivered by British Cycling and supported by Sport England, Sky, the Bicycle Association and Lazer helmets, the scheme is also the first step on the Great Britain Cycling Team Performance Pathway.

The governing body says six in 10 of the Team GB riders aiming for Olympic gold at Rio next year came through the Go-Ride programme, and it hopes the new partnership will help unearth more talent for the future.

John Mills. British Cycling’s director of coaching, education and development, said: “We’re thrilled to be partnering with Evans Cycles as the provider of the bikes we use to deliver Go-Ride.

“The fact that the bikes bear the name of one of the most phenomenal athletes Britain has ever seen is sure to inspire thousands of young people to get into the sport.

“We are confident that we can provide over two million opportunities for young people nationwide to get into cycling by 2020 and this partnership will help us to be more ambitious than ever in uncovering the next generation of talent.”

Besides more than 300 Go-Ride clubs across the country, many of them at schools, there os also a dedicated Go-Ride Racing calendar of entry-level events.

James Backhouse, marketing director at Evans Cycles, said: “Riding your bike is one of the greatest things in the world, and by partnering with British Cycling we can help youngsters across the country discover that for themselves.

“We’re enormously proud to be part of the Go-Ride programme and are flattered that British Cycling gave us the opportunity.”

Meanwhile Hoy has also provided some tips for parents to encourage their children to take to two wheels.

1. Take your time choosing the bike

Heavy bikes can put children off cycling and will have them struggling up any little ramps or hills on the way. Lots of kids’ bikes on the high street weigh an absolute ton, but Evans Cycles pride themselves on selling quality children’s bikes (like the HOY ones, naturally) which can endure the same kind of thrashing as an adult’s bike.

2. Learn to stop before you start

It’s sensible to teach your kids the basics of braking before they start going fast. This will keep them safe during their first parent-free runs and give them confidence and the feeling of control.

For the very youngest budding cyclists, a great alternative to stabilisers is ‘runner’ bikes. Try one to help your toddler get to grips with the basics of balance and being in the cycling position for the first time.

Not all kids want kids’ helmets - sometimes they want to be ‘big kids’ - but once children are old enough to understand, try talking to them about the reasons for wearing a helmet as well as leading by example yourself. And it goes without saying that choosing a great-looking lid that fits well makes all the difference.

Head for somewhere away from busy roads and lots of people where your little ones can have the space to develop their bike handling skills. Wheelies, track-stands and jumps are all things you can work up to…