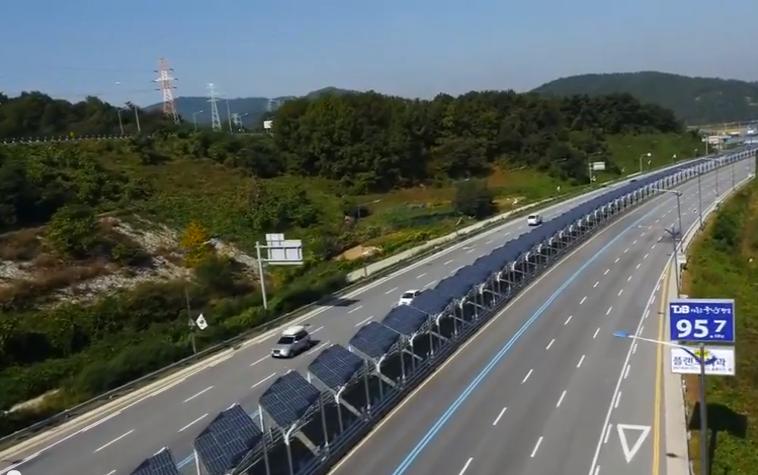 An innovative cycle lane in South Korea has a solar powered roof, providing shelter from sun and rain for cyclists while generatng electricity.

The 20 mile path between Daejeon and Sejong runs down the middle of a six lane motorway, but it isn’t clear how much cyclists are protected from the noise, pollution and turbulence by the pavilion.

We recently covered a new solar powered cycle lane in the Netherlands. Called SolaRoad, the project in the town of Krommenie, around 10 kilometres to the northwest of Amsterdam, is backed by the Province of North Holland, construction firm Ooms Avenhorn Group, research group TNO and technology business Imtech, and essentially sees the standard road surface replaced by solar panels.

The cycle path being used to pilot the scheme has between 1.5 and 2.5 metres of concrete base, with a tough glass surface, underneath which will be a 1 centimetre layer of crystalline silicon solar cells.

The website adds that the group developing the concept believe that the cycle path should generate 50 kWh per square meter annually. ICT systems will allow electricity to be distributed during peak sunshine hours as well as at night and during cloudy conditions.

It is hoped that eventually the concept could be rolled out across the 137,000km road network in the Netherlands, providing power for everything from traffic signals and street lights to nearby homes.