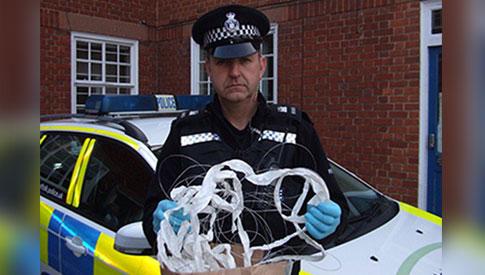 Police in Suffolk have warned cyclists and pedestrians to be on their guard after wire was found stretched across a cycle path at head height.

The wire was found by a member of the public at Mead Drive, Kesgrave, just to the east of Ipswich, on the evening of Sunday 15 March at around 8.30pm, say police, and two other pieces of wire were subsequently found.

PC Simon Mortimer of the Kesgrave and District Safer Neighbourhood Team said: “This is an extremely dangerous and irresponsible thing to do, stretching wire across the paths at head height could cause serious injury to cyclists and pedestrians.

"We are appealing for anyone who has information about this mindless act to contact us to prevent further incidents and someone being injured.”

Anyone with information is asked to contact the Kesgrave and District Safer Neighbourhood Team on 101 quoting reference WO/15/472, or the charity Crimestoppers, anonymously, on 0800 555 111.

Sadly, wire being strung across a cycle path is a relatively common occurrence, and we have reported on a number of such incidents in the past.

In 2011 a cyclist on the Bristol & Bath Railway Path was left unconscious and had his bike stolen when he crashed due to a clothes line being strung across the route, the busiest off-road cycle path in Britain.

In late 2013, a cyclist in Edinburgh was left “bleeding and dazed” when he came off his bike due to a clothes line placed across the city’s Roseburn path at head height.

A second cyclist narrowly avoided been brought down by a similar trap nearby, which was placed lower, with her boyfriend saying that the perpetrators had carried out “the equivalent of attempted murder.”