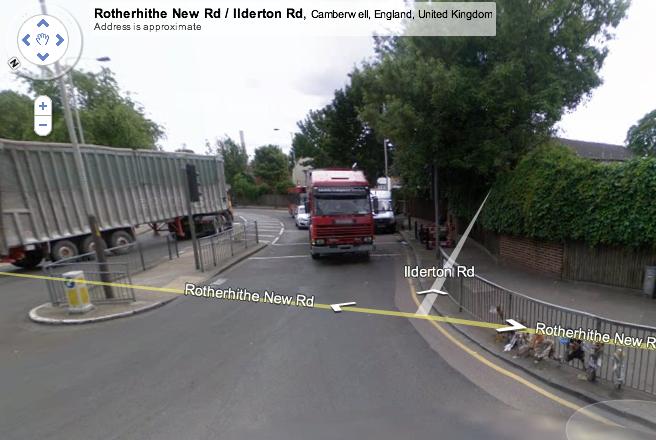 The victim, 33-year-old mother Nga Diep from Brockley, had been cycling to work at Guy’s and St Thomas’s Hospital Trust when a skip lorry forced her into the railings, at the junction of Rotherhithe New Road and Ilderton Road. She was then run over by the lorry’s rear wheels.

A coroner’s inquest in October 2008 returned a verdict of accidental death.

Following the fatality, Southwark Cyclists launched a campaign calling on Southwark Council, run jointly by the Conservative and Liberal Democrat parties, to remove the railings.

Barry Mason, Chairman of Southwark Cyclists, told the South London Press that Mrs Diep “got squashed against the railings and got killed there,” adding, “I attended the inquest and we have been saying ever since the crash that these railings were unsafe and dangerous.

“People are cycling past these railings every day,” he continued. "We are seriously concerned. This was a terrible accident where this woman got killed on the railings. It’s been two years and the council is supposed to do something about it.”

Southwark Council has now launched a public consultation, open until 22 February, regarding proposed changes to the junction that will include removal of the railings and the addition of pavement cycle paths and a pedestrian crossing.

According to the South London Press, in the consultation document, the council acknowledges that “there have been a number of serious accidents at the junction involving pedestrians and cyclists.”

Given that statement attributed to it, we’ve asked Southwark Council to clarify exactly why it has taken almost two years since Mrs Diep’s death to consider removing the railings, and we’ll bring you their response as soon as we have it.

Liberal Democrat MP Simon Hughes, who represents North Southwark and Bermondsey, told the newspaper: “I hope the council is positive and speedy in doing something at this junction to remove this danger to cyclists.

“There is always a danger at junctions that left-turning vehicles can injure cyclists,” he continued. “The railings should be moved to make sure cyclists can leave the road in emergencies,” added Mr Hughes.

A number of cyclists, mostly female, have been killed in London in recent years in accidents that involve them being forced into railings by lorries, typically when the latter are turning left, leading to a number of councils across the capital removing railings.