Sugoi is a Canadian company, owned by Cannondale, with a highly regarded reputation for producing winter clothing that performs well when the temperature plummets along with good fit and sizes, and pretty good prices. They’ve been expanding their presence across the UK in recent years, and now boast 55 dealers, meaning it’s easier than ever to get your hands on the clothing.

Sugoi popped along to the road.cc office earlier this week to give us a first look at the latest autumn and winter clothing, and a sneak peek at a new jacket coming next spring. We’ve picked just a few highlights, starting with the most talked about jacket of the season, to share with you.

The Zap jacket costs £100, is available in black, red or yellow (and pink for women) and uses a unique a nifty fabric with thousands of embedded glass beads dotted all the entire jacket. By normal daylight the jacket just looks, well like any normal black, red or yellow jacket. But shine a light on it at night and the whole jacket reflects back the light. We first told you about it earlier this year but this is the first time we've had the chance to have a proper close look at it. Above is the Zap jacket shot with a camera flash. Okay, so the concrete wall doesn’t provide a great contrast to demonstrate the jacket, but you can clearly see the impact the flash is having on the jacket compared to the same jacket in black at the top of the article.

You can see a better demonstration in this short video. Sugoi claim it’s a lighter weight reflective treatment than any other reflective print approach, and in the hands it certainly does seem to be the case. We’ve got one in for test to see how it stacks up out on the road and in real-world conditions. It’s taken a while to get one in because they keep selling out, it’s been that popular.

As well as being reflective, it's claimed to be waterproof, using Sugoi's own HydroShield fabric along with a waterproof main zipper and taped seams throughout. There's a rear zipped pocket and drop tail. The Zap jacket is available for men and women, with the later available in a choice of black or the pink colour pictured.

The Versa (£100) is a jacket that has been in the Sugoi range for many years, but whereas before it used to be a multi-sport top designed for running and cycling, they now offer a cycling-specific version. That means they’ve been able to tailor the shape and fit better for cyclists, and have added features such as the drop-down tail. 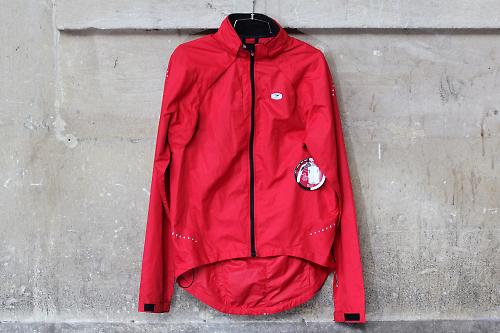 The Versa’s party trick is removable sleeves, so it can convert from a jacket into a gilet. That provides you with essentially two cycling tops for the price of one, and offers you loads of versatility to adjust to conditions either before a ride, or during a ride. The sleeves are actually attached together by a strip of fabric that loops around the back of the shoulders, and this assembly is attached to the main body of the jacket using just magnets. 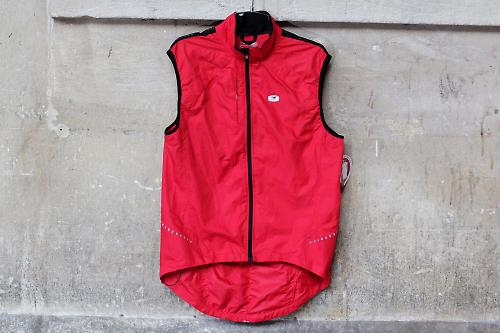 There are similar jackets that also have removable sleeves, but most use zips and by using magnets, Sugoi claim it’s much quicker and easier to remove and reattach the sleeves. The demonstration certainly appears convincing, the sleeves falling off easily and rolling up small enough to go into one of the Versa’s rear pockets, and the sleeves go back on in a cinch, with the magnets helping to align the sleeves in the correct position.

It's available in three colours, red, yellow and blue.

The Helium RS Jacket is brand new, again it might be a recognisable name for anyone familiar with the Sugoi range over the years, but it has been massively updated. It’s not actually available until next March, so don’t go rushing to the shops hoping to buy it just yet, but when spring does roll around this looks like the ideal sort of jacket for the changeable conditions typical of that season. It’s designed to be a packable jacket, made from a super light fabric, with a reported weight of just 100g. The fabric is water resistant, good enough to keep a short shower at bay, yet with ample breathability we would imagine to avoid overheating. Most similarly lightweight jackets can fold up small enough to go into a jersey pocket when not needed, which is fine if you have a spare pocket, but what if your jersey or jacket pockets are all full? 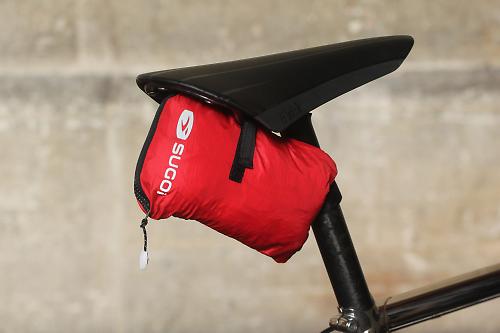 Sugoi’s simple answer is to add several Velcro straps so the jacket, once folded up into its own pocket, can be attached to the rails of a saddle in much the same fashion as a saddlebag. That’s a pretty neat idea we reckon. There’s a strip of the Zap reflective material down the side so you get a nice boost of visibility. Of course, not much use if you already have a saddlebag on your bike, but many cyclists don’t use them and for those people, this Versa jacket could be ideal. 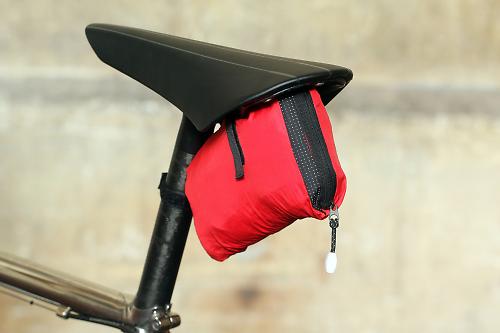 And the price? Well it’s going to be £50 when it’s available next year. We’re looking forward to testing it when it is out in the shops.

We’ve got some of the latest Sugoi winter clothing in for test so watch the homepage for those reviews over the following weeks. For now head over to www.sugoi.com if you want to see any more of their latest products.