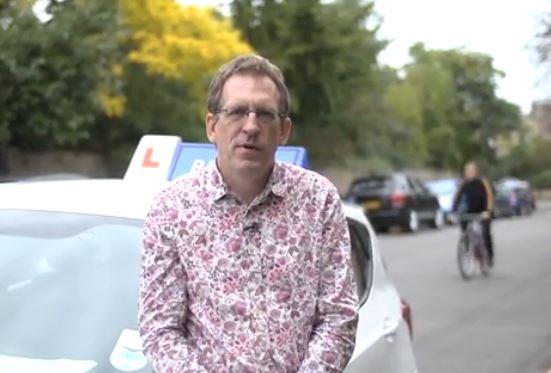 Film aims to help instructors understand cyclists' behaviour - so they can pass knowledge onto learner drivers...
by Simon_MacMichael

Driving instructors are the target audience of a new video that highlights cyclists’ road positioning and behaviour while riding that other road users need to be aware of. The intention that the knowledge will be passed onto learner drivers to help them understand the roads are for all, not just motorists.

Featuring Blaine Walsh, founder of the online video site driving-instructor.tv and Michael Frearson, director of the Association of Bikeability Schemes, among other things the video explains what the primary position is, and why many bike riders choose to take it.

Frearson says “it is vitally important” that driving instructors “understand what cyclists are doing and communicate that to their trainees.”

“Why do they cycle down the middle of the lane, what is that all about? And if we know that, we can pass that onto our pupils, and our pupils understand it. That’s really powerful and important.”

Frearson emphasises that when someone on a bike is “riding in the middle of the lane,” he or she is not “getting in the way” of a motorist.

Rather, the cyclist is a road user who reached that section of road first, and therefore have “priority” – a word that Walsh says is preferred to the term “right of way,” and he explains why that phrase is misleading and gives an incorrect sense of superiority to some drivers.

The video, which has been produced for the Bicycle Association, was filmed in Cambridge and once available on drivinginstructor.tv will have a potential audience of 20,000 driving instructors who in turn tutor 300,000-plus learner drivers.