You’ll know Vittoria from the world of tyres, but the big news from them at The Cycle Show was that they’re now offering a range of wheels to fit those tyres to.

Vittoria have background in distributing wheels: they were Mavic’s distributor in Italy for 18 years. They know the ins and outs of of wheel and tyre compatibility from tyre manufacture side, and from their time running neutral service in races up to and including the Giro d’italia they also understand the needs of pro riders. So they consider themselves to be well placed for this first foray into the wheel market.

The road range comprises 8 wheels, at price points all the way from £199 to £1,499. All the wheels are to Vittoria’s own design, and they handle the quality control using their own engineers; the full carbon wheels are manufactured in Italy and the rest of range are made in Taiwan.

All the wheels use Japanese EZO bearings and Sapim spokes to Vittoria’s own specifications, and all the wheels come with a pair of wheel bags. You also get a Vittoria wheel tool which has tyre levers, a bladed spoke holder, spoke keys, nipple drivers (stop it) and allen keys, all of which should make any wheel fettling fairly simple. 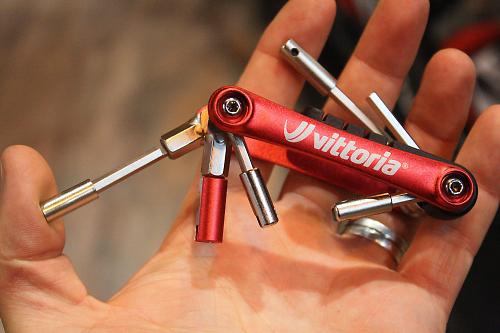 The wheels all have an asymetric rear rim to get a better spoke angle on the drive side, and they’re laced 2:1 in favour of the drive side to even out the spoke tensions.

One of the main points Vittoria were keen to press was not the wheels themselves, but the support structures they’re putting in place for cutomers once they’ve bought a pair. Each set of wheels will come with an individual QR code that tracks the wheel. It’ll allow the wheels’ owner to register on a site where they’ll be able to register the wheels, validate their warranty, get service and maintenance information and even pass the wheels on to someone else if they sell them. 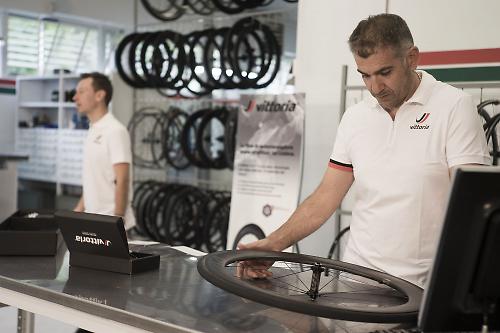 On top of that, Vittoria are setting up ten service centres across the world to deal with warranty and service issues. All of them will be equipped the same way, with testing equipment and standard tools. They’ll all be linked in to a global system set up to handle spares, open queries, and return products.

Anyway, let’s have a look at the range. 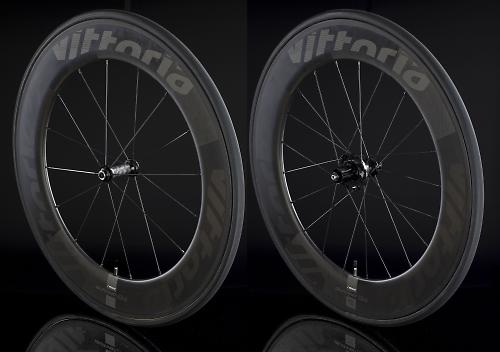 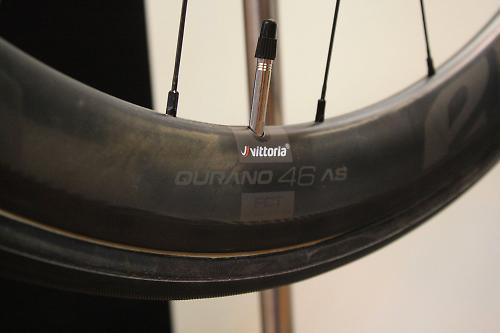 The main technological point with the Qurano rim is that Vittoria are using graphene in the carbon mix. Graphene is a honeycomb carbon structure that’s a single atom thick. it’s incredibly strong for its weight, but it’s included in the Qurano wheel not for its strength but for its ability to efficiently dissipate the heat generated by braking through the whole rim structure. Heat build-up leading to delamination and deformation of the carbon is still a major cause of failure in carbon rims. Vittoria told us that in testing they never managed to get the rim temperature above 140°C, well below what would be needed to affect the integrity of the wheel. 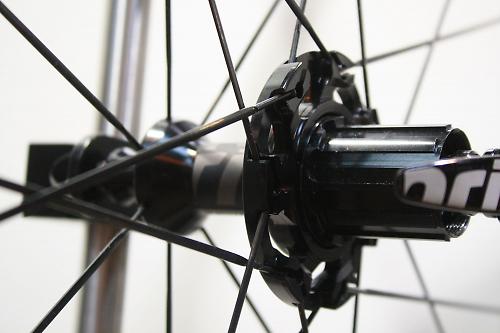 The Qurano – and all wheels in the range down to the Elusion – use a freehub design that Vittoria call the SwitchIT. it’s basically a tool-free swappable freehub; you can just pull the freehub off the wheel and fit another one. Spare bodies will be available individually, and you can remove the freehub body with a cassette still fitted. That means you could keep two cassettes for flat or climby rides and easily swap between them, or have a campagnolo and Shimano/SRAM body, or a 10-speed and an 11-speed, if you were swapping your posh wheels between different bikes. 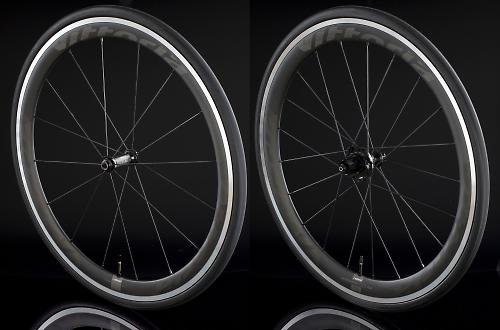 The Fraxion (£899) is a carbon/aluminium deep section. The carbon is structural: the alloy rim extrusion extends about 4mm under the carbon and the two are bonded together, so there’s no alloy under the carbon where it forms the section of the rim and the spokes are bedded in the carbon itself. The alloy braking surface is much more efficient at dissipating heat than carbon, with the maximum temperature Vittoria have recorded at the rim being 120°C. The resin used is good to over 160°C, so there should be no problems with delamination. 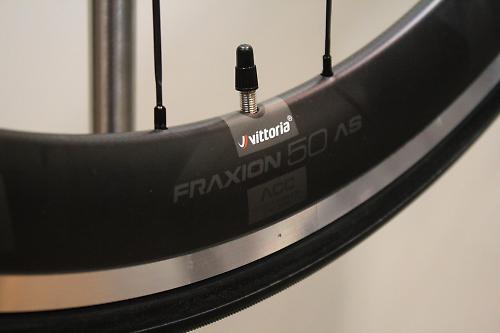 Like the shallowest Qurano, the Fraxion uses a shallower front rim. The rear is a 50mm section and the front is 5mm shallower. Stated weight for the pair is 1,698g. 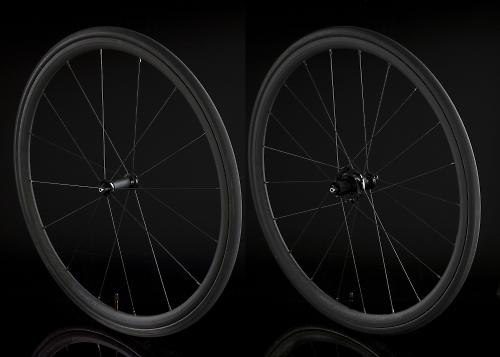 Next wheel down is the Elusion Nero (£649) which is a shallower section alloy rim (26mm front, 28mm rear) that’s fully coated with a hard ceramic finish for extra durability in same manner as Mavic’s Exalith wheels. You need specific ceramic pads for the best performance, and you get a set with the wheels. The wheelset weighs in at a claimed 1,576g. 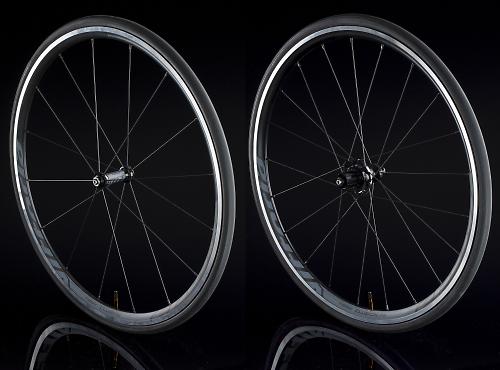 The Elusion is also available without the ceramic coating for less £399 which weighs a bit more (1,591g) as it uses brass nipples instead of alloy ones. 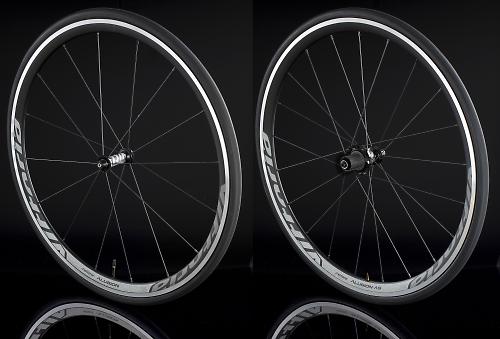 The Alusion (£299) looks like a good training and all-purpose wheel. At 1,790g it’s not over heavy and it uses a 32mm section alloy rim that shoulf be nice and strong. 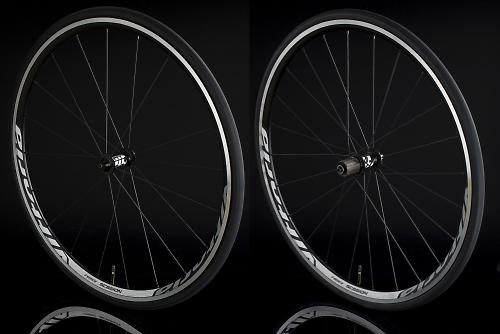 Better value still is the £199 Session, the bottom of the range wheel. It’s lighter (1,763g) because is uses a shallower section 26mm rim but you’re still getting what looks like a very well-built wheel and even the very bottom wheel in the range has wheel bags included as standard, and you get the individual QR for registration and warranty purposes.

It’s a full range from racing to training and there’s some good-looking wheels in there at decent prices. We’ll be getting some in for test soon.