A cyclist has urged Surrey County Council to take steps to repair a road defect that has caused a number of riders to come off their bikes in recent weeks, with a number of them being taken away by ambulance, and says action needs to be taken “before someone gets killed.” A council official yesterday said it would get someone to look at the location “immediately.”

Road.cc reader Richard Lewisohn told us that “an innocuous looking bump in the Tarmac by the village green” in the B2126 Horsham Road at Holmbury St Mary in the Surrey Hills “has taken out countless cyclists.”

He said that during the past month, at least four incidents have been attended by ambulances, and his mother-in-law, who lives in the village, has seen nine riders go over their handlebars.

He told us that last Saturday alone, “in the morning and again in the afternoon, two sets of paramedics, police and ambulance had to attend for two assumed broken collarbones.”

Richard contacted Surrey County Council to urge them to repair the defect, and has also been in touch with the local newspaper, but by Saturday had heard nothing back.

Surrey Police gave him the number of the Highways Agency, although since they are only responsible for motorways and major trunk roads, the road in question is outside their remit. 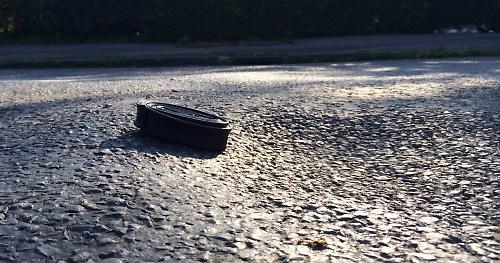 The seemingly innocent bump that's a trap for the unwary

Yesterday, he succeeded in speaking to a member of staff at Surrey County Council. He told us: “The guy I spoke to seemed genuinely concerned and said they’d send someone down ‘immediately’.”

He has also been in touch with two local cycling clubs, Dorking CC and SWRC, to alert them to the danger but acknowledges that their members account for “a tiny fraction of the cyclists who use the road,” hence wanting to get the message spread further.

The defect is on the village green side of the road, and was the location of a feed station during last year’s inaugural Prudential RideLondon-Surrey 100, although Richard notes that “thankfully RideLondon’s route is from the opposite direction.”

With the event due to return next month, he added: “I’m also assuming Surrey County Council might have sorted it out by August, preferably before someone gets killed.”

Yesterday, we reported how the council has pledged to make temporary repairs to a dropped kerb in Guildford to allow the town’s annual bike races to go ahead after concerns were raised that they might have to be cancelled on safety grounds.

Recreational cycling in the county has boomed in recent years, partly due to it hosting much of the route of the 2012 Olympic road races and more recently as a result of the launch of the Prudential RideLondon legacy events.