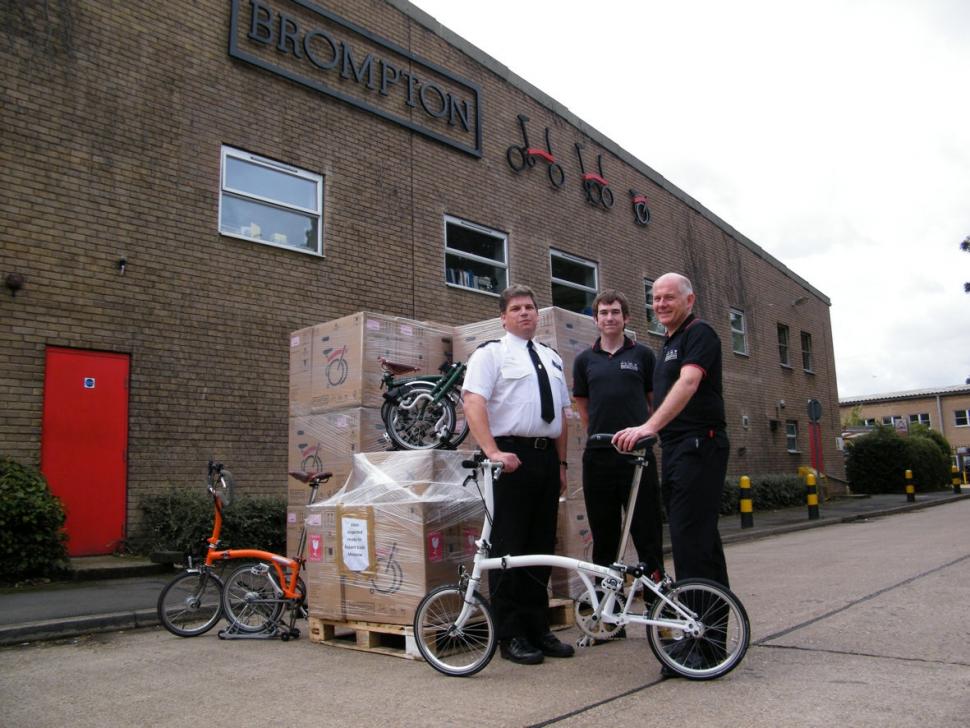 Three men have been fined £10,000 each and given suspended prison sentences for their part in the theft of 46 Brompton bicycles worth a total of around £58,000.

Gary Lewy, aged 46,. from Much Hadham in Hertfordshire and Thomas and Dean Cunningham, both from Epping, Essex, respectively aged 66 and 43, were each given 18 month prison sentences suspended for two years and ordered to pay £550 compensation and perform 100 hours of community service.

The folding bikes, which have a high resale value making them tempting targets for thieves, were being sent by Brompton to Russia in August last year, but only made it as far as Leyton in east London. It is unclear at which point in the supply chain they were stolen.

The Metropolitan Police's Cycle Task Force searched premises in Leyton in September, recovering two of the bicycles from the consignment, with their investigation leading officers to a pawnbrokers on Leyton High Road, where they discovered five more bikes, plus records showing that four others had been sold.

The shop was owned by Lewy, who was convicted of handling stolen goods and attempted handling stolen goods. While officers were there, Thomas Cunningham arrived with a van that contained 35 boxed Brompton bikes. Police searched his home and seized £5,900 under the Proceeds of Crime Act.

Chief Superintendent Sultan Taylor of the Metropolitan Police's Safer Transport Command, commented: "These bicycles were going to be sold in Lewy's London pawnbrokers, with unsuspecting buyers purchasing in good faith.

"I am particularly pleased that we have prevented anybody buying stolen property and that the offenders have been brought to justice."

Steve Burton, Transport for London's Director of Enforcement and On-Street Operations, added: “This is a great result for our Cycle Task Force.

"Tackling cycle theft is an important step for us at TfL in achieving the Mayor’s ambition to get more people cycling and we alongside our policing partners are committed to improving cycle security in the capital and bringing prolific cycle thieves to justice.

"Criminals may think that this is a low risk crime, but sentences like this send a clear message that it is not – if you chose to steal bikes, you could end up in jail."