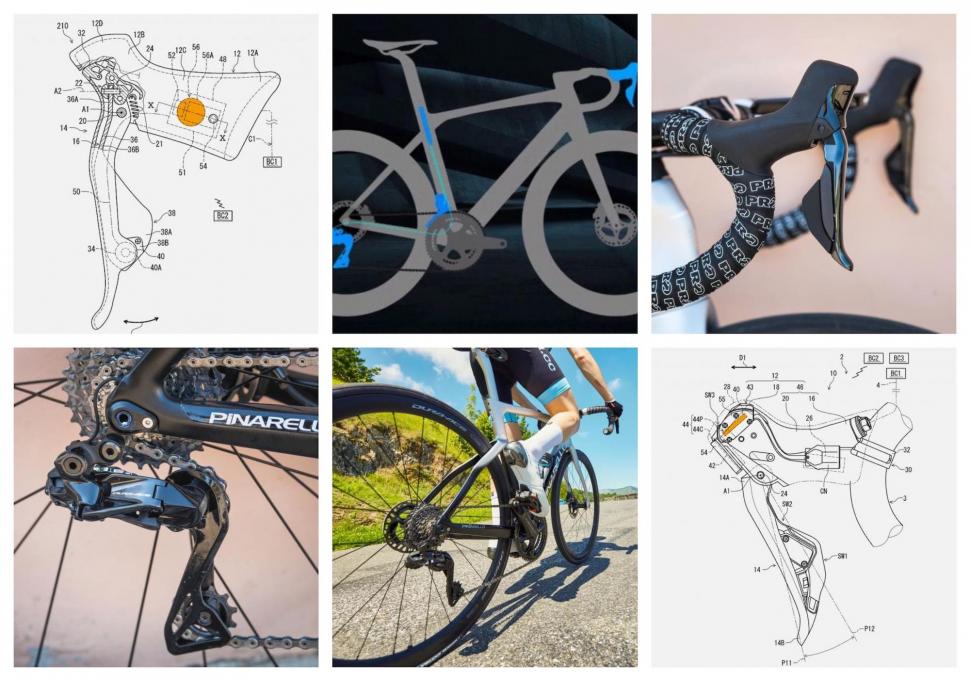 What do recently published patents tell us about the future direction for cycling tech innovation?

Published patent applications can tell us a lot about the directions cycling technologies may be heading, and here we're going to see how those filed by Shimano in the lead up to the launch of the Dura-Ace 9200 groupset in August 2021 gave us an early indication of what was possibly on the way.

This article was written by Joshua Parsi (Associate), Nick Tyrie (Technical Assistant), and Joseph Duffy (Technical Assistant) at Reddie & Grose LLP, a firm of patent, trademark and design attorneys with offices in London, Cambridge, Munich and The Hague. Get more info www.reddie.co.uk

Ever since the pandemic erupted in 2020, bicycle sales have surged. In the UK alone, bicycle sales were up 63% year-on-year and cycling increased by as much as 200% during the first lockdown.

The events of the last 18 months certainly have not squeezed the brakes on cycling tech innovation either. In 2021, Shimano celebrated their 100 year anniversary and with it released the latest offering of their top-spec, road-specific groupset, Dura-Ace 9200.

This version of Dura-Ace arrived with some notable changes. The newest developments include 12 sprockets for riders to work with on the cassette, significantly reduced shifting times and refinements for disc-brake systems. The most significant development, however, came in the form of semi-wireless gear shifting.

Being valuable technology that likely saw vast research and development (R&D) investment, Shimano would have been keen to protect as many new inventions in Dura-Ace 9200 as possible by using patents. 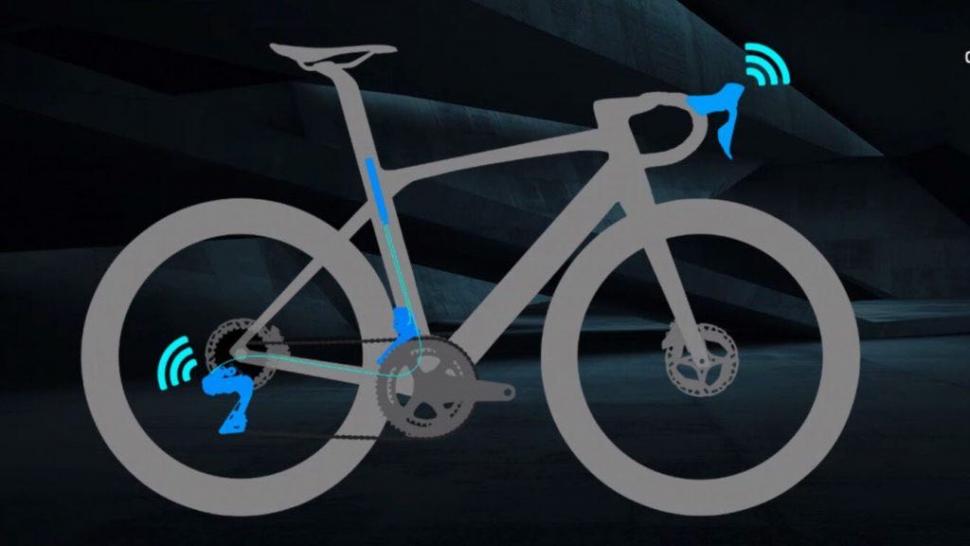 The disc brake version of Shimano's latest Dura-Ace groupset is semi-wireless; there are no wires linking the shifters with the derailleurs or their battery

These patent applications that were filed by Shimano were, or will be, made available to the public 18 months after filing. We are therefore able to use this product launch as a case study for what published patent applications tell us as to the directions cycling technologies may be heading.

Of course, far from every patent application leads to a product being developed fully and eventually released. Shimano files dozens every year in an effort to protect their R&D. For example, they filed a patent application for a 14-speed drivetrain way back in 1996 and was granted that patent in 1999, and there are many more examples of designs that have never come to market.

Some of the first clues that Shimano were seriously heading in the wireless direction emerged in October 2017, with the publication of US patent application US 2017/0305490 A1.

The application disclosed a wireless communication unit at one of the base members (the shifter hood) and the brake operating member (the brake/shifter lever). These two alternatives are shown below, with the coin cell that powers such units highlighted in orange. 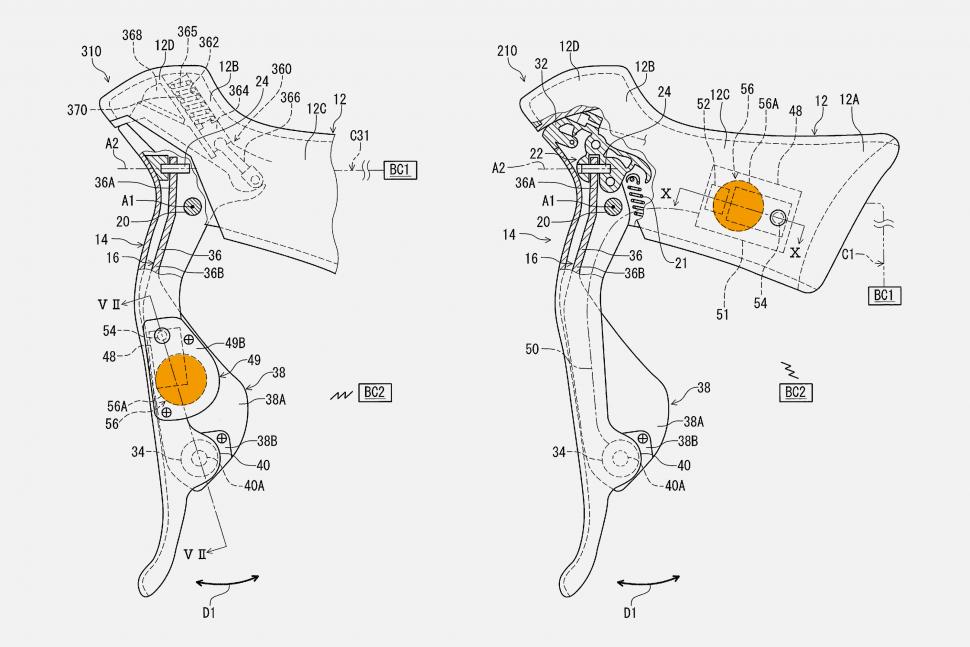 Shifter schematics from US 2017/0305490 A1 show two different locations for a wireless communication unit in both hydraulic-brake (left) and cable-brake (right) shifters, the coin cell for each highlighted in orange

With the wireless shifting technology clearly being at an early developmental stage, it was crucial that Shimano protected their ideas at the broadest and most conceptual level. Embodiments disclosed the technology for both hydraulic and cable methods of braking, for road bicycles (as shown above) and time-trial bicycles (below), and for a wide range of locations of the wireless communication unit. 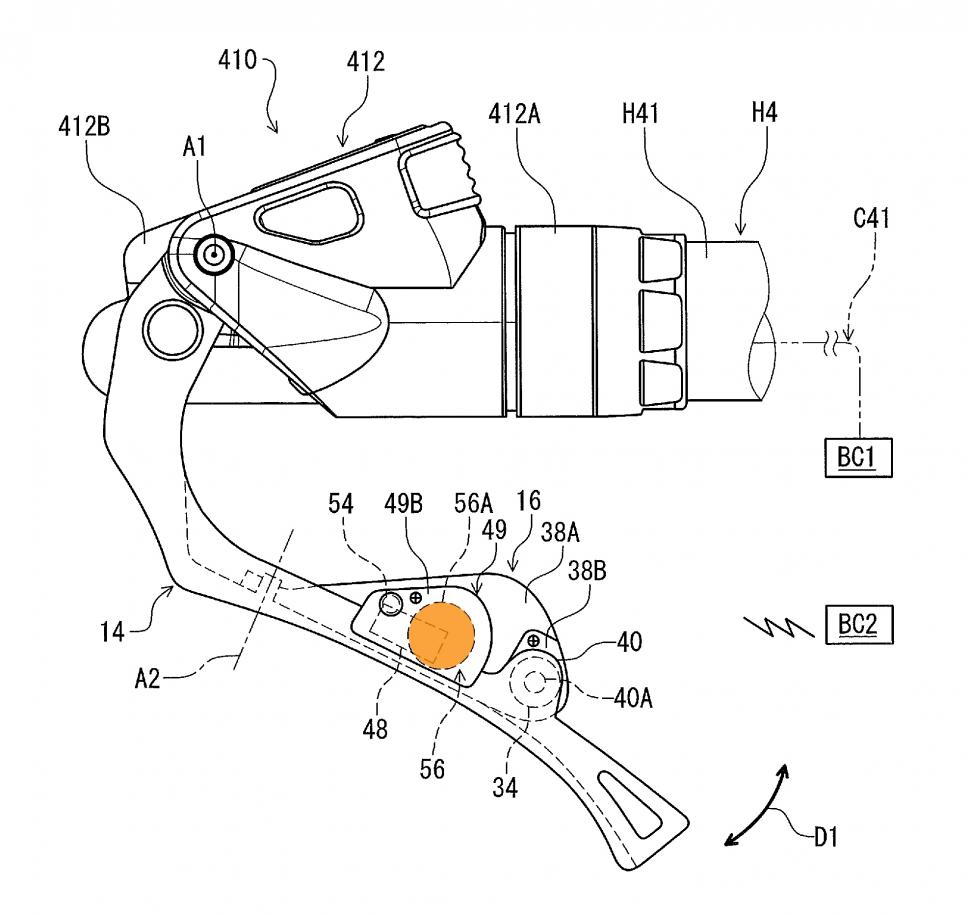 Another schematic from US 2017/0305490 A1 shows the location for a wireless communication unit on a TT shifter, the coin cell highlighted in orange

This style of application was likely due to Shimano wanting to remain flexible to any developments in the market by competitors, as well as to cover all possible embodiments of a product that was very much in its infancy. In fact, neither of the two locations of the coin cell as shown above would go on to make it into Dura-Ace 9200.

Increasingly major clues as to the eventual direction that Shimano were taking were made public in March 2021. Another US patent application, US 2021/0061413 A1, disclosed what would eventually go on to be the so-called semi-wireless system that Dura-Ace 9200 employs. 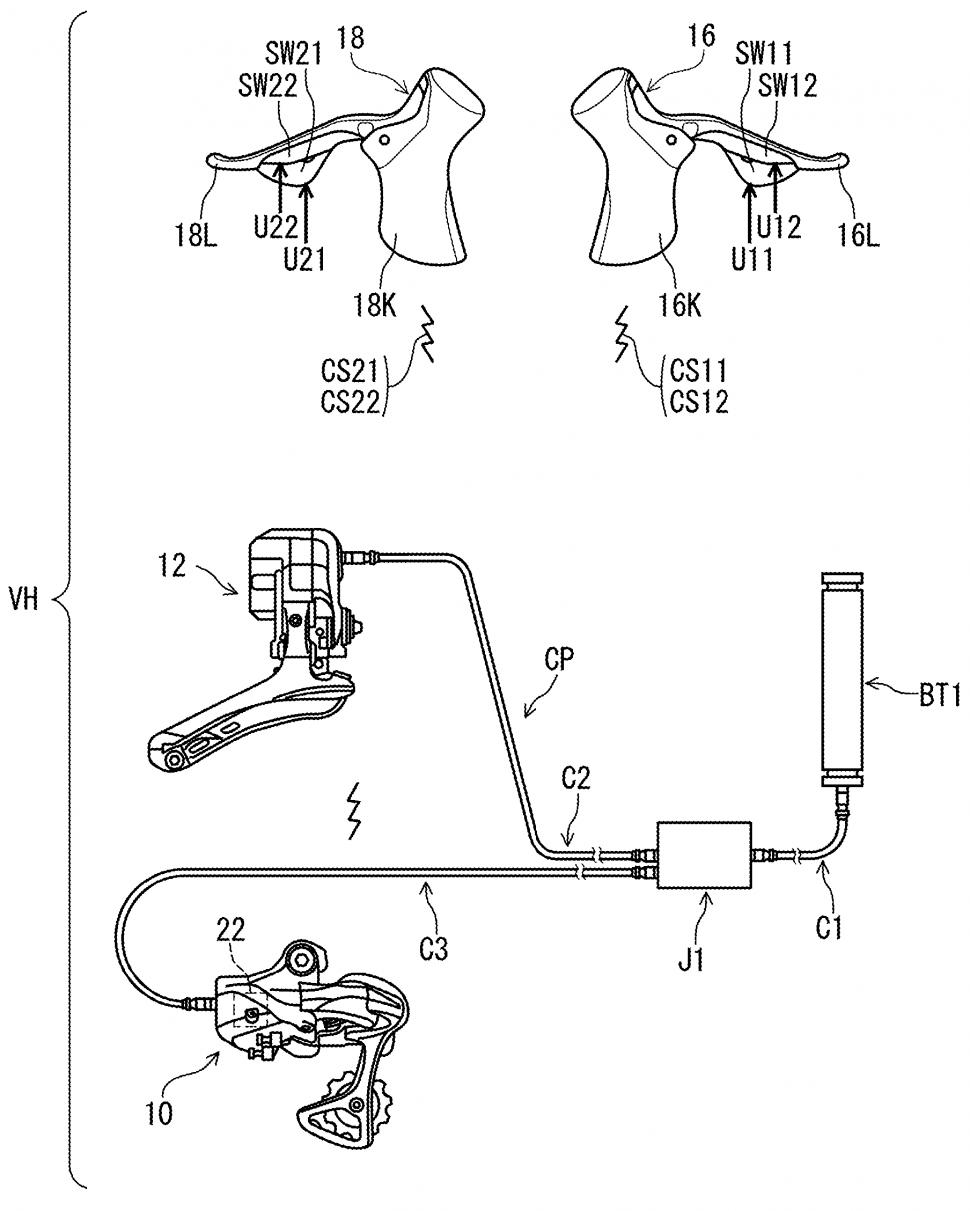 In the new semi-wireless design, shifting signals are to be sent wirelessly between shifters and the derailleurs, though with the rear and front derailleur wired together and powered by a single battery located in the bicycle frame.

Shimano’s Dura-Ace groupset has had electronic shifting options since 2009 (when Dura-Ace 7970 was launched), but always with wires between shifters and derailleurs. In the disc brake version of the released product, shifting signals for both the front and rear derailleurs are sent wirelessly to the rear derailleur (shifts are still wired on the rim brake version).

However, a broad drafting approach appeared to cover embodiments in which shifting signals are sent to the front and rear derailleurs separately. This patent application told us Shimano had at least an interest in a wireless groupset. It was however still too early to be certain of an upcoming product containing the technology.

Wireless shifting isn't new in the world of cycling, of course. US-based company SRAM released fully wireless eTap shifting back in 2015. In eTap systems, both front and rear derailleurs use individually mounted batteries, and each communicates wirelessly with the shifters.

With SRAM’s wireless system already on the market, Shimano will have needed to navigate around SRAM’s existing patent portfolio to be able to launch and patent their own product.

The patterns in which patents are filed and subsequently published can also provide a valuable window into the technological output of innovating firms. For example, the publication of three US applications from Shimano – US 2021/0139102 A1, US 2021/0139105 A1 and US 2021/0144453 A1, all in May 2021 – provided the strongest suggestion that a product launch was on the horizon.

All three disclosed a refined location for the power supply (coin cell) and circuitry: at the end of the shifter furthest from the handlebars. The image below highlights this location of the power supply, again in orange.

Filed back in 2019, these correlate to the exact location of the shifter batteries in Dura-Ace 9200. The relatively narrower and more focused disclosure, coupled with the flurry of applications aiming to protect very similar features, was an indication that Shimano were firmly set on a location for the power supply and circuitry, and a product launch was in the pipeline. 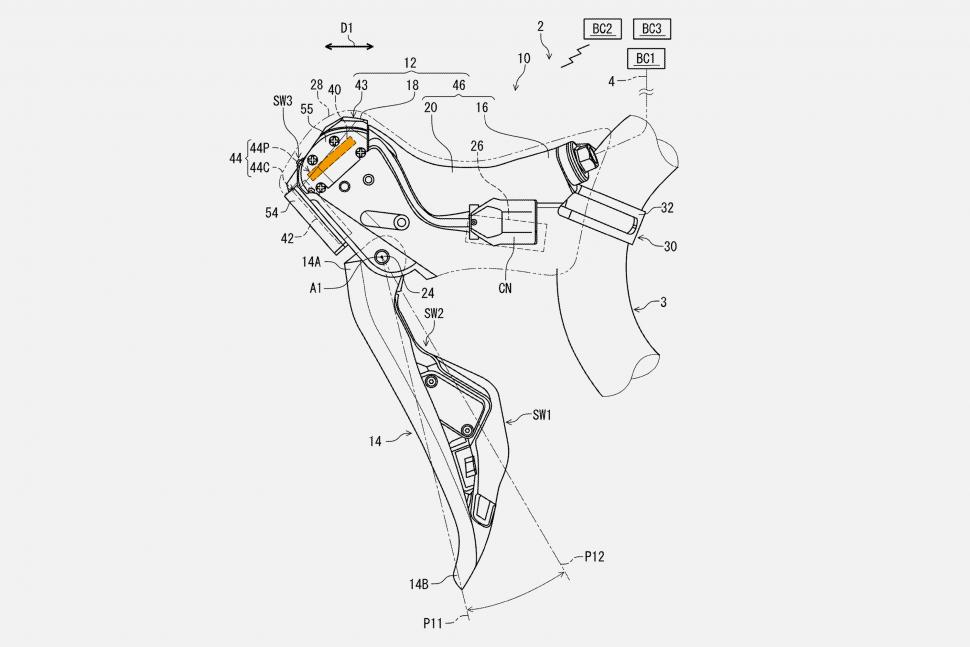 Whilst these published applications can provide great insight, the 18-month delay after a patent application is filed until publication means that the public is usually first introduced to the exact features of a product on release day. It will be a while until we see any additional patent applications that could have been filed in the run-up to the Dura-Ace 9200 launch in August 2021. 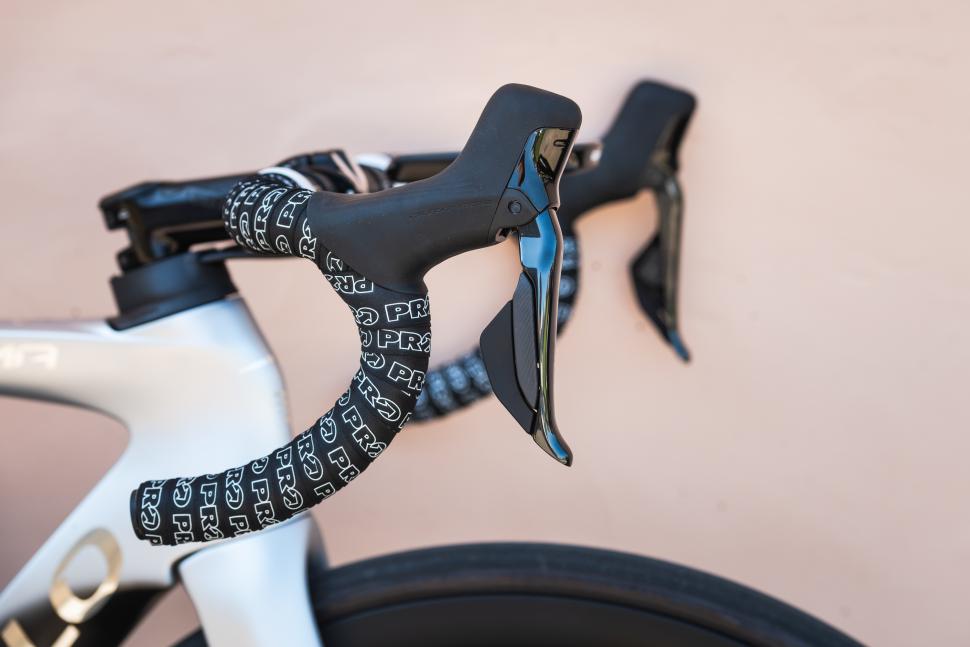 The cycling world is clearly growing rapidly in many directions, be it professional racing or casual commuting, and patents provide some insight into what cycling innovators believe those directions may be.

In what was already a competitive market, intellectual property (IP) rights, such as patents, are proving increasingly crucial to companies wanting to gain a foothold and establish their position in the market. The content in, and patterns of, the publications of these IP rights can give major hints into what technologies bike brands have up their sleeves. 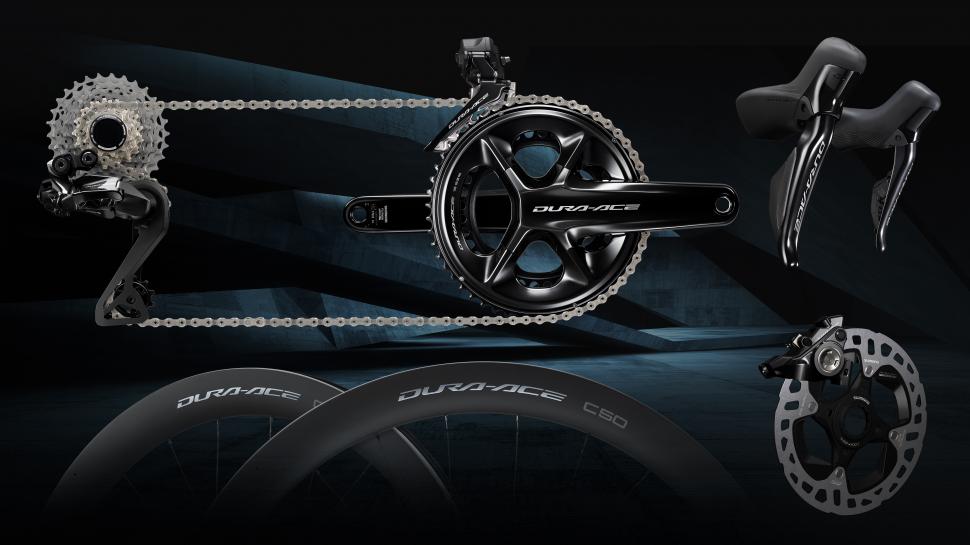 These clues can range from an early developmental stage right through to a product launch, but with the delay in publication allowing for brands to keep some features secret until the big day.