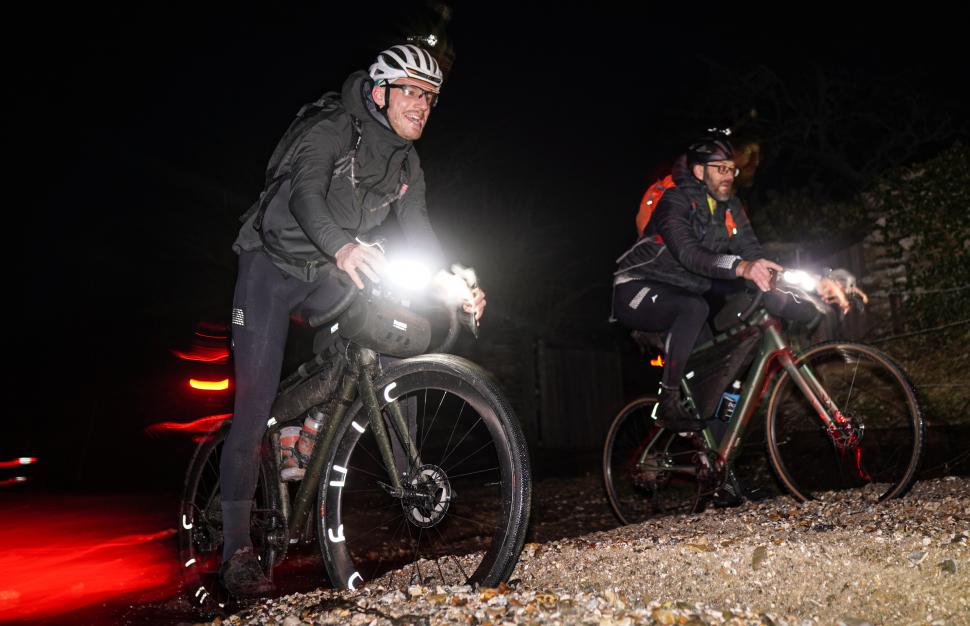 Come June, you’ll see lots of people setting out on a lovely sunrise to sunset ride on the longest day of the year. We’ll talk about it on the site. There are lots of organised ones you can join. The weather will be warm (relatively speaking), the daylight hours extensive. It’s a fun day out. A long one, but a fun one.

There are two solstices though. And it got us thinking: what if we did the sunset to sunrise’s ugly sister ride? Through 16 hours of darkness, in the depths of winter? That would be a challenge, right? Interestingly, we didn’t find any organised ones that we could join. So with the help of Tom from The Woods Cyclery in Lyndhurst, we made our own: A twisty-turny 200km of roads and trails around the New Forest. In and out and round and round and up and down basically all of it.

The route looks like madness, but there is method in there, somewhere. For a start, we’re doing it in the dark, so it’s not like we’ll really notice that it’s all over the place. And it packs a lot of riding in, but never really gets that far from the start/finish point, so if things really go south during the night then at least there’s a realistic option to bail, rather than a point to point or a big loop where you’re committed once you set off. The New Forest is perfect all-nighter terrain: there’s lots of gravel trails, and it’s interesting, but it’s not super technical or super hilly. In short, we surmised: doable. 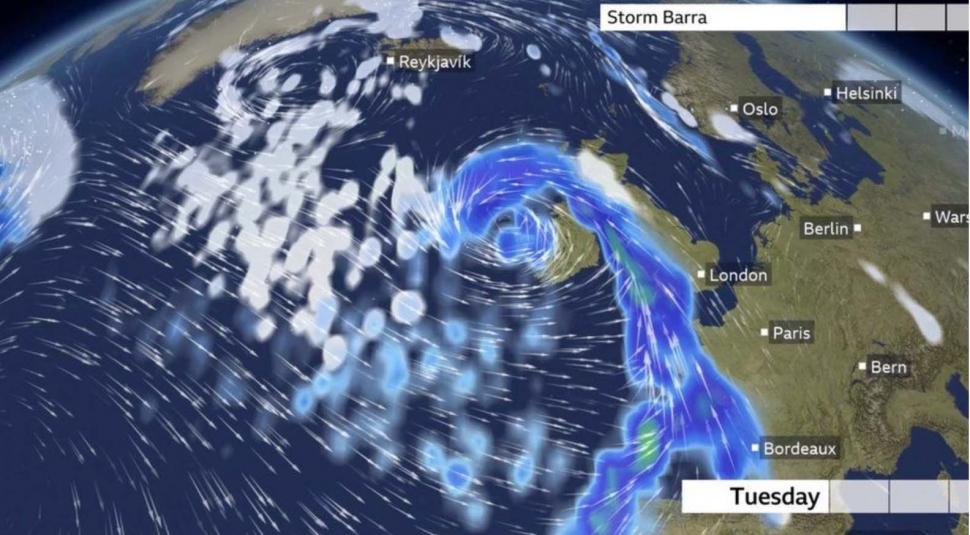 The sun sets at four, and at half past two we were huddled in the shop looking through the window at the hardest rain I think I’ve ever seen in the UK: the kind of rain where cars just stop in the road, and wait. Had Storm Barra dragged its heels over the West country and shown up a few hours later, this whole story would be a very different one, and probably quite a lot briefer. As it was, the weather gods smiled upon us, damply. By the time we rolled out into the dusk it was a clear, post-storm sunset that engulfed us. 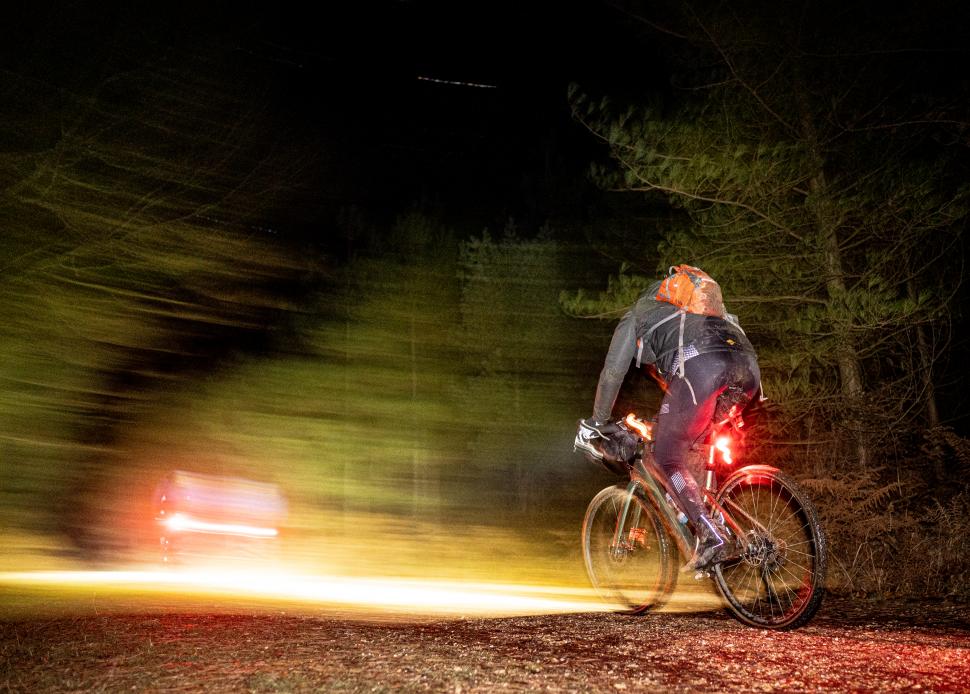 Riding off road at night in the middle of winter is a new experience for me. At dusk the world closes in around you, but unlike a summer night ride it feels like it flicks the switch rather than dimming the lights. Then it’s just you, and as much as your light beam can pick out. For ages. It’s properly dark by 5pm, so it almost immediately feels like the middle of the night, which is a bit disconcerting when you’re only an hour in, with 15 to go. On we went, following the GPS route with no real idea where we were: it’s not an area either of us know. There was the bit with the nice easy, wide, gravel trails. There was the bit where we popped out on the beach to see the lights of the ships in the Solent, and the Isle of Wight twinkling beyond. There was the bit where it all got a bit rocky and narrow and I had a couple of goes at plugging a hole in my tyre sidewall. There was the nice disused railway line bit, and then the bit where the disused railway line disappeared into a flood that stretched well beyond the range of our lights, even on full beam. And then there was the bit where Brad fell off, and smashed his bars, and smashed his hand. 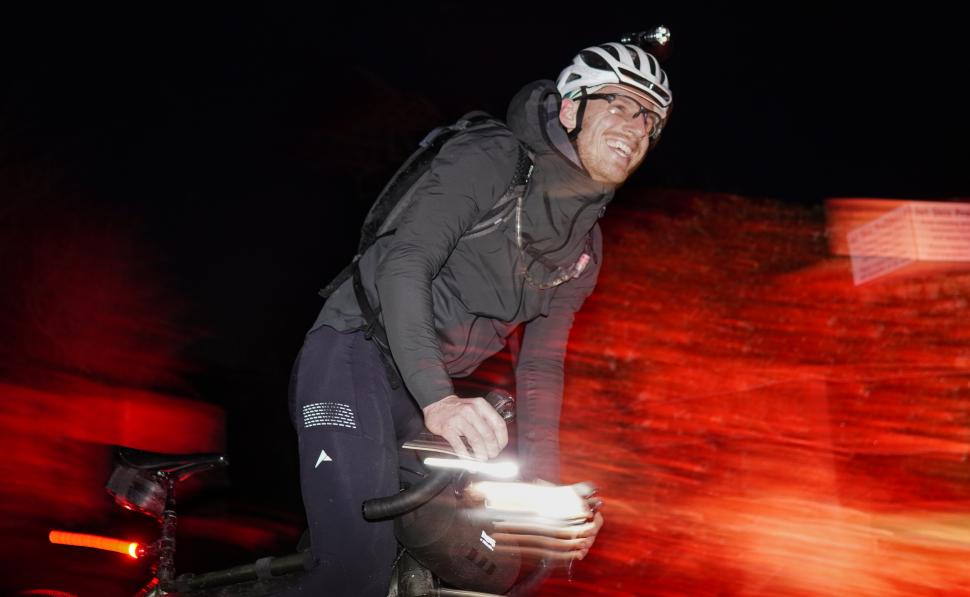 Now, it’s my opinion that riding through the night in winter is hard enough, with a fully functional bike, and all your limbs intact. So it’s entirely fair to say that had it been me, this would probably have been curtains for our adventure. But Brad’s made of strong stuff, and he wasn’t going to let the fact that one of his bar drops was hanging loose stop him, nor the fact that he couldn’t really hold onto the bit that was left thanks to a big gash in his palm. So, on we soldiered, as deer panicked before us and jumped hedges to escape, while the equine inhabitants of the New Forest did precisely the opposite, especially on slippery descents where it was hard to stop. 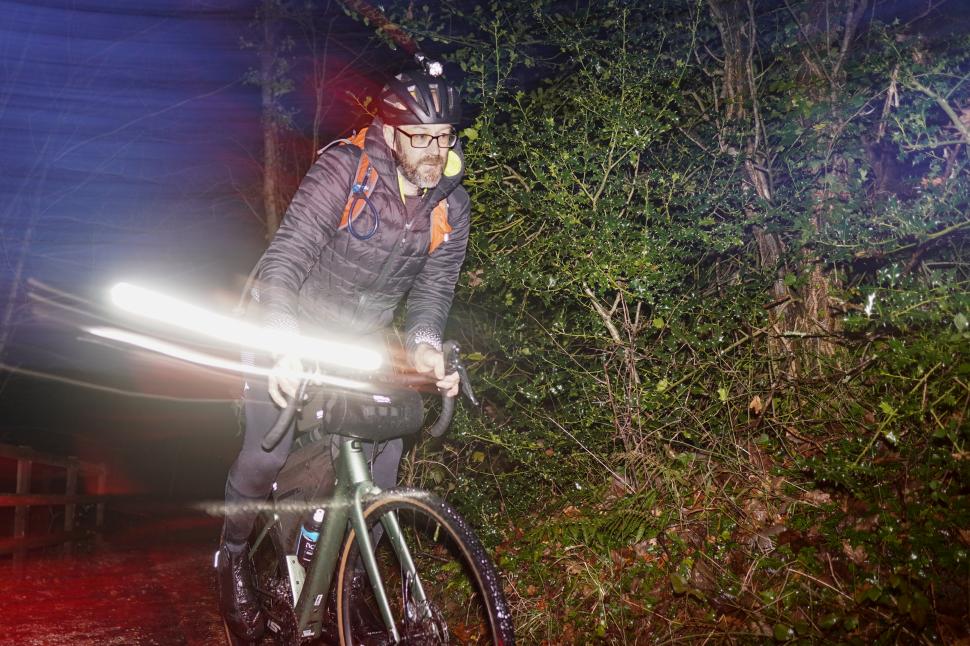 I’ve done my fair share of long rides, and I’ve come to learn that for me there’s a fine line. On the one side, my body is okay and I can plod on indefinitely at no great pace. And on the other I’m falling apart and being sick in a hedge as my stomach decides it’s all a bit much. I’ve got better at spotting the signs that I’m close to overstepping the mark, and a rest always brings relief, but there’s no great joy in stopping on a night ride: nothing’s open, it’s cold and dark, and all your body wants to do is turn in for the night. At some point my whole view of the world narrows to a simple binary: places I could sleep. Places I couldn’t. Luckily, in the former camp the New Forest has plenty of picnic benches you can slump on for half an hour and try to pull yourself together. Well, it has at least two: one outside a pub somewhere, and one in a children’s play park somewhere. Sorry I can’t be more specific. Parts of this ride were dark in more ways than one. 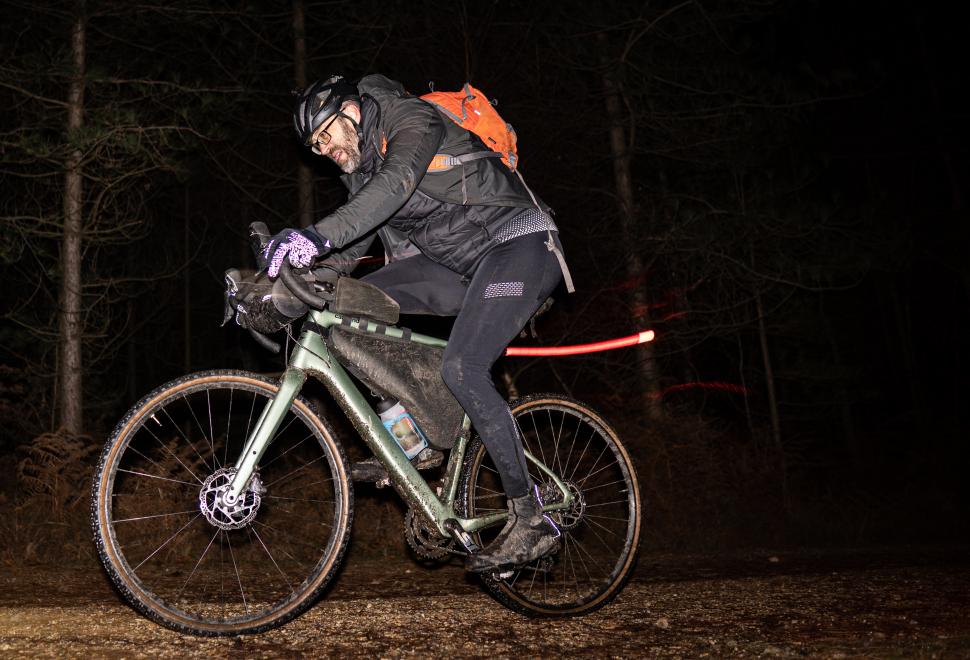 But the kilometres ticked away. On the road, and on the gravel, and dodging the gorse across the moorland, and occasionally through a dense jungle of rhododendrons, and surprisingly rarely along a traditional UK winter bridleway where the only option was to get off and push. And as dawn drew near, I was finally able to unleash the “any idiot” coping strategy that’s served me so well on rides like this before. Any idiot can ride 40km. Any idiot can keep going for an hour and a half. Any idiot can get back to Lyndhurst from here. And, like we always knew it would, dawn came. And, like the dark falling, it feels much more abrupt in the winter. But there’s something magical about riding into the dawn, that I will never, ever tire of. After hours where your entire existence has been condensed around you, pressing in, suddenly the views expand and the world resolves itself. There’s nothing quite like it. And by good planning, or dumb luck, or a mix of both, we’d made this moment coincide with the final run back to the bike shop. It wasn’t open, though.

Planning your own adventure

Our route worked out pretty much ideal, so many thanks to Tom at The Woods Cyclery in Lyndhurst for working it out. Our advice would be to go easy on yourself in winter when you’re riding at night. The New Forest is less technical and better when it’s wet than the other options we looked at. Had we attempted the Dorset 330 or the Ridgeway after the storm that came through, it probably would have ended badly, or at least prematurely. It almost did anyway. 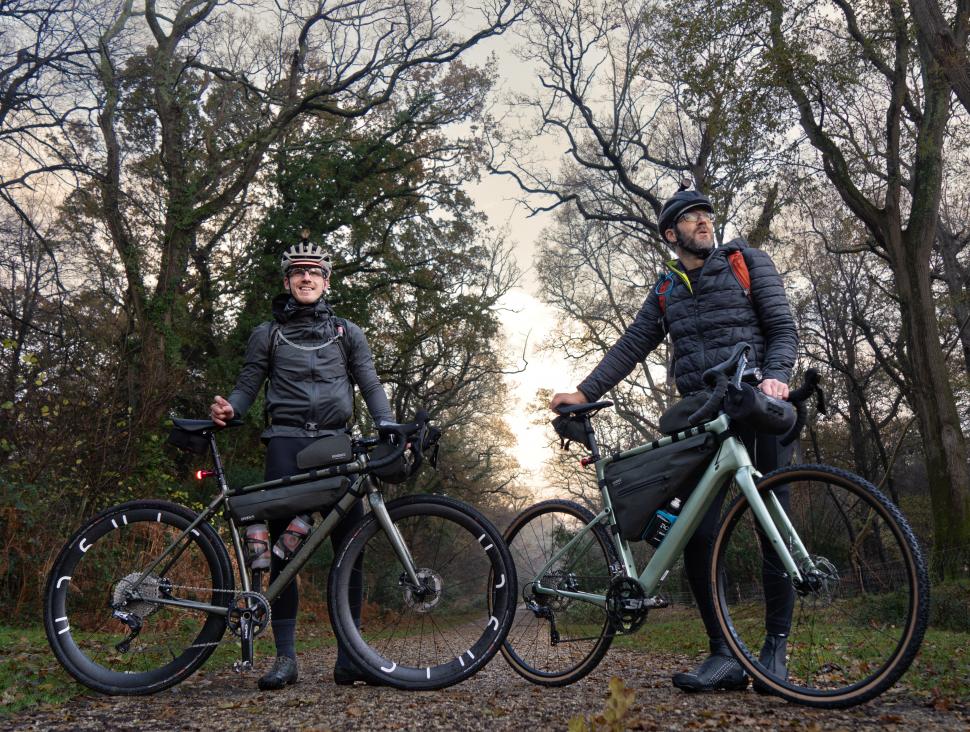 We both rode Cannondale Topstones, which were great for covering distance over a mix of terrain. The carbon frame has a frame design that allows for about 30mm of rear travel from the carbon layup in the rear stays, which is welcome on rough surfaces. Brad added a USE Vybe suspension seatpost to his alloy Topstone for a similar effect, and we both used Brooks Cambium saddles. 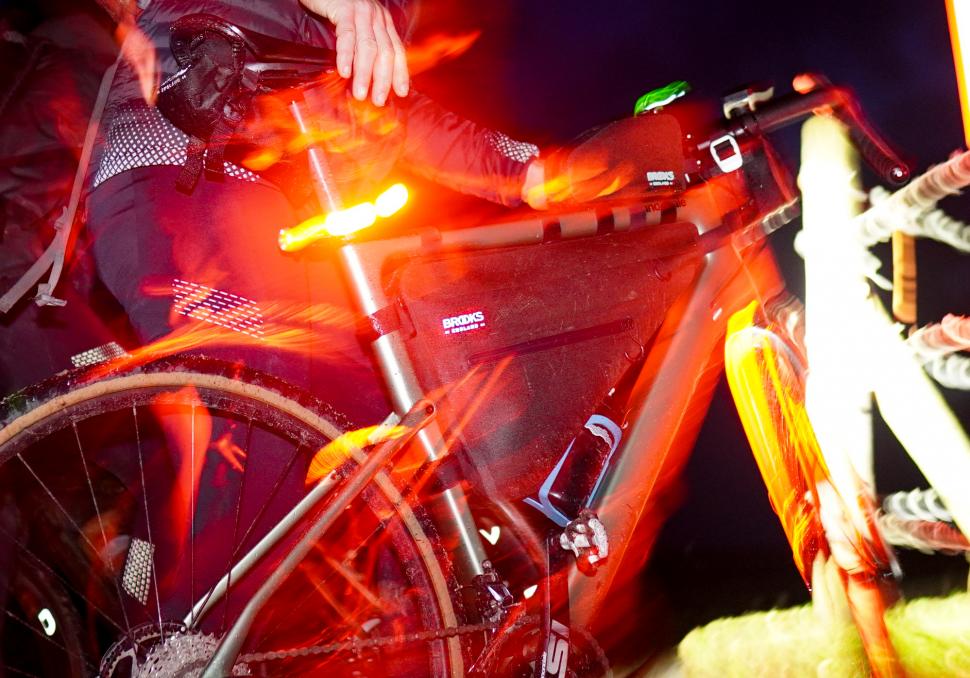 Exposure’s Toro Mk12 lights did most of the illumination, with a Support Cell in the top tube bag to double the run time: they easily lasted all night and have a great beam for off road riding. We used Diablo Mk12 lights on our helmets, and TraceR rear lights for being seen on the road sections. 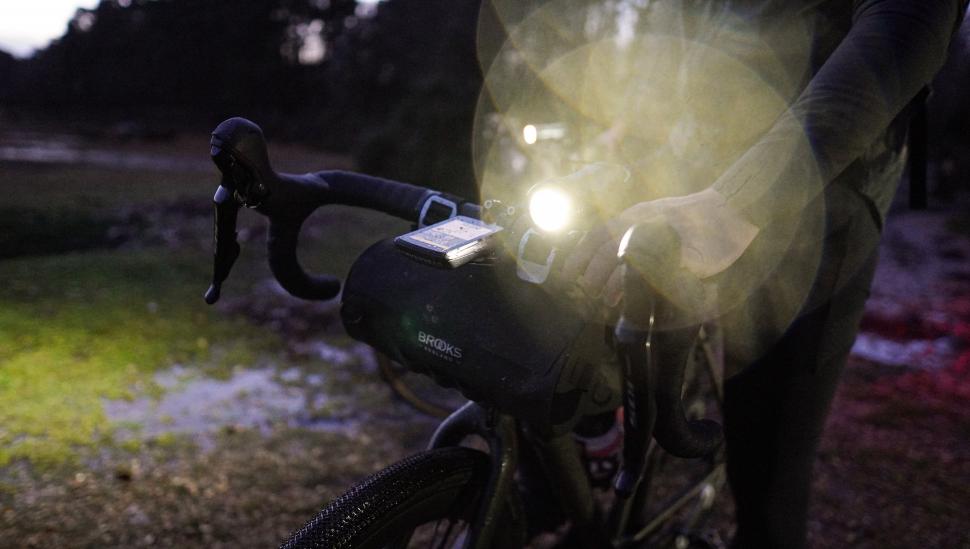 We followed the route on Hammerhead Karoo 2 GPS head units, which made a great job of navigating a route we didn’t know and re-routing us a few times around floods and deep, fast-flowing fords. 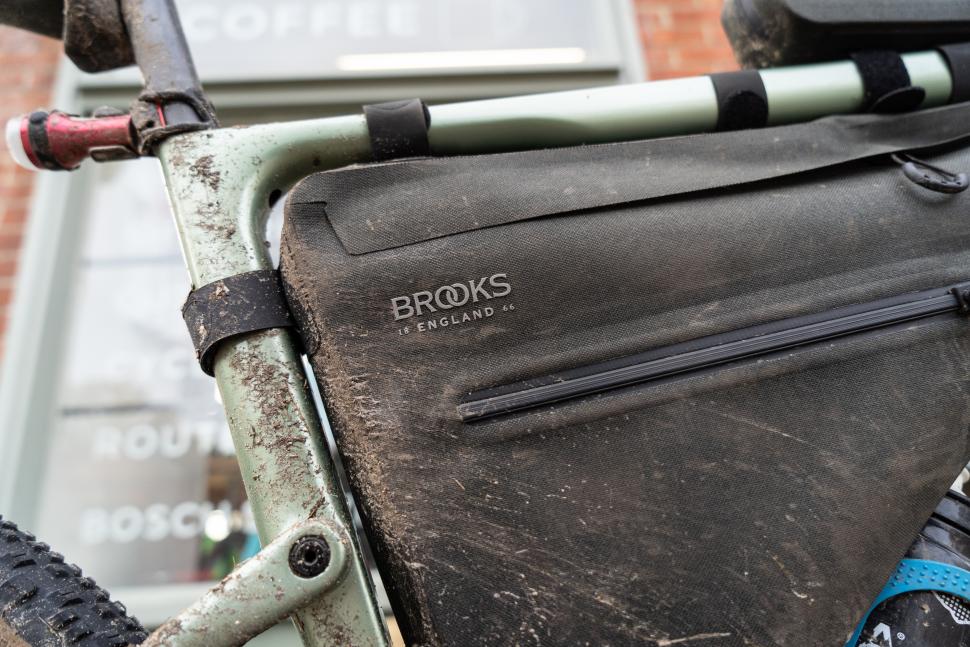 We used a selection of bags from the Brooks Scape range, including frame bags, bar bags and seatpacks. Most of them were full up with food! 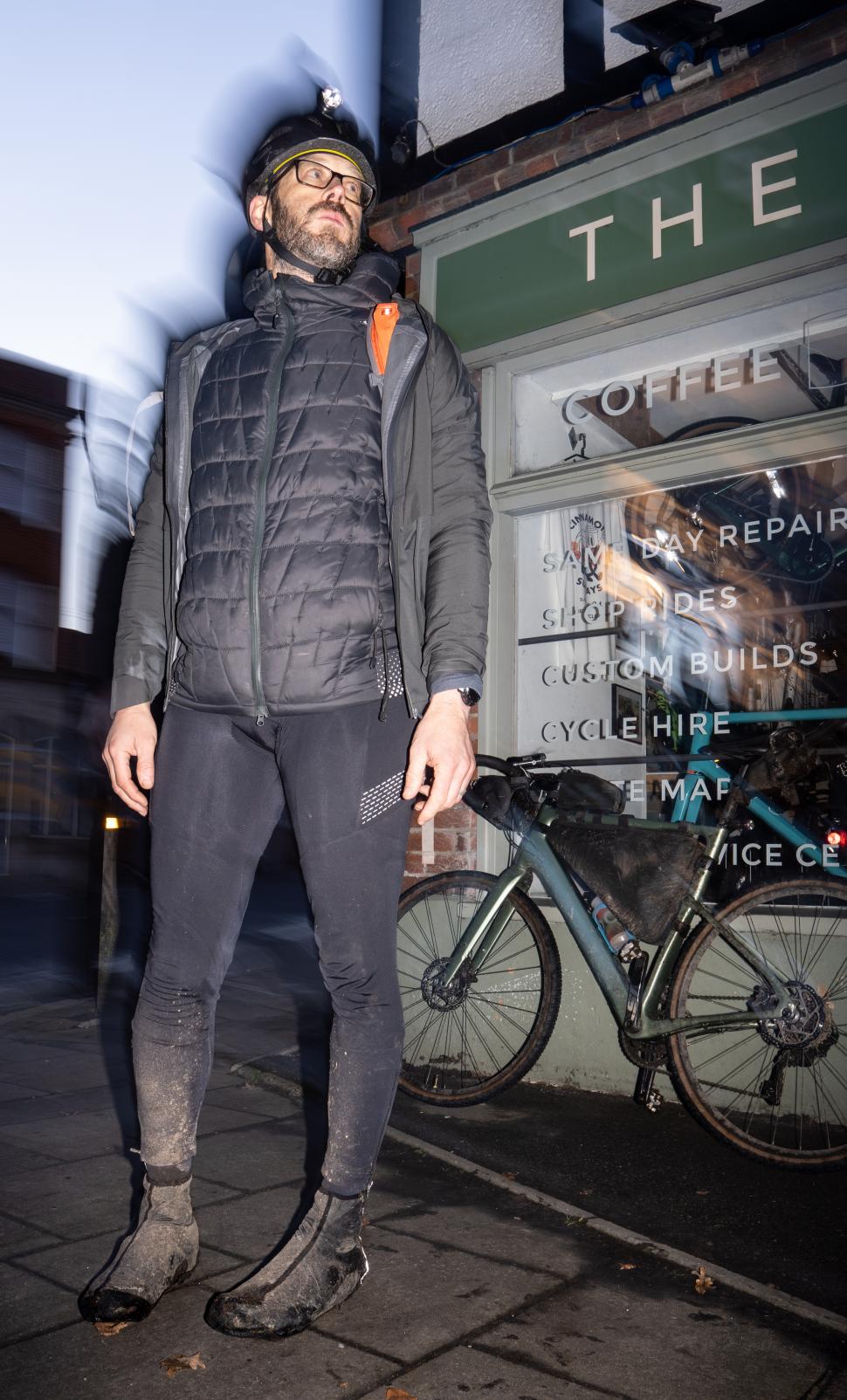 We were wearing clothing from Altura’s Autumn and Winter range. The Twister insulated jacket is perfect for slower riding in cold conditions where you need to keep your body temperature up, and we were grateful for the Polartec gloves, especially on stops.