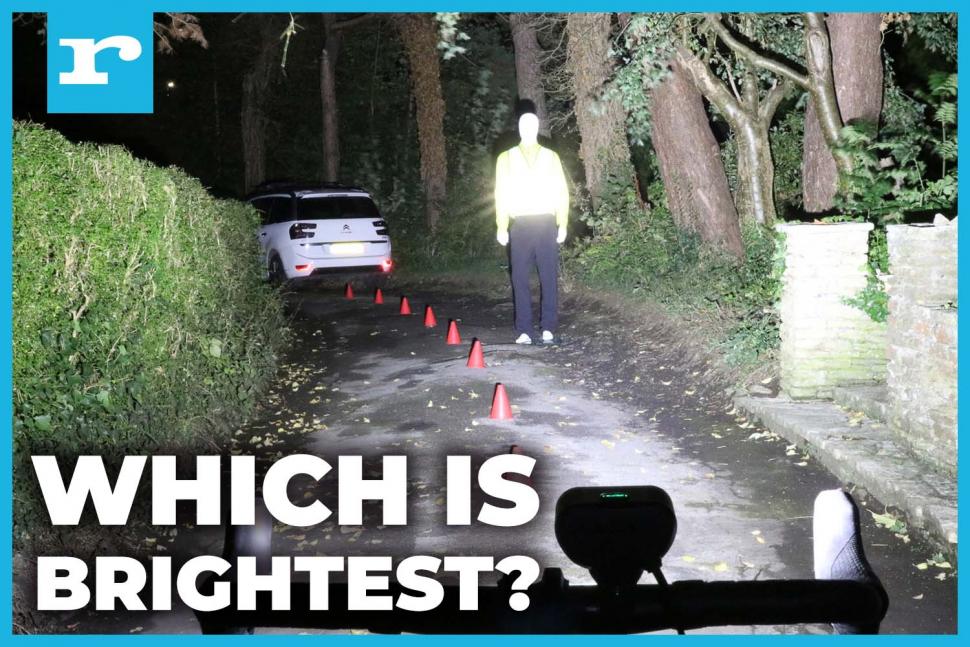 The clocks have gone back, so it's only right that we've beam tested a whopping 47 of the latest cycling lights in our annual bumper beam test. Compare and 'contrast' their output to see which is best for your riding
by Jack Sexty

It’s that time of year again in the UK... the clocks have gone back, it's dark before teatime and here at road.cc, we’ve flipped the switch on the 2022 version of our front light beam comparison engine to help you choose from the best bike lights (or more specifically the best front bike lights) for your riding.

Our beam test comparison data contains beam shots and data for 47 lights this year, and also includes historical data going back to 2015. That's quite a lot of lights, so you can directly compare hundreds of lights with one another. After it, we'll take a brief look at the various options in lighting technology and recommend some of our favourite lights...

This year's lights – what have we learned?

As with last year, the trend seems to be towards brighter and brighter lights, although there are not many brand new models for 2022/23.

That being said, there's more variation going on in terms of beam shape. There are some SvTZO-compliant lights in there with German-style cut-off beams, but other manufacturers, especially Ravemen and Moon, are using refractive lenses to shape the beam so less of it's going into the sky. The Ravemen lens, which uses two perpendicular sets of refractive elements to spread and lower the beam, is especially effective.

We're still not seeing many light manufacturers who do make SvTZO-compliant lights – Cateye and Lezyne, to name two – offer them in the UK, which is a shame as many people always comment asking for more choice in that part of the market. The choice is there: just not for us in the UK, it seems.

As was the case last year, more lights seem to be moving towards USB-C charging, especially for the brighter lights. It offers shorter charge times, and a double-sided design so you're not trying to jam it in the wrong way up. The contacts are a bit more widely spaced than Micro-USB too, which could be a benefit in the wet where it's possible to short out the port even if it's waterproof.

How we collect beam data

We've collected lots of beam data so you can compare and contrast the different lights. Light manufacturers use a number of different metrics to describe light output. We've used lux here, but measured at a number of points across the width of the beam. That gives an indication of the brightness of the beam at the centre, the amount of peripheral light and the throw of the beam. We think that's the most useful measurement to compare directly. Specifically, we measured the lux value of the beam at two metres distance, in 10cm increments from the centre of the beam to 1m from the centre, giving eleven readings.

We've also included data on the shape of the beam, by taking a picture of each beam with the camera in the same position. Wider beams should appear wider, and if a beam isn't round you should be able to see what's going on with the shape.

To get a good idea of what each beam looks like, we set up a bike on a rig so that we could photograph the beams of all the different lights in a comparable way. Each of the beam shots was taken using the same settings on the camera: 28mm (effective 45mm), shooting for 1s at f29 on ISO6400, if you fancy doing some of your own. They're as directly comparable as they can be. If one looks brighter than another, that's because it was. Manny the high-vis-wearing mannequin is at 10m (the cones are 2m apart) and the car is 20m away.

Although we use the same piece of road every year, it's very hard to make the beam shots directly comparable to other years. If the road was particularly wet in one year, for example, that means less reflected light from the surface compared to a drier year, making the lights appear darker. So the only directly comparable shots are the ones taken in the same year.

First, light beams follow an inverse square law regarding the strength of the light at increasing distance, because they're illuminating a two-dimensional plane. So at twice the distance, the light beam is spread over four times the area. Consequently, a light that is measured as twice as bright at its centre won't let you see twice as far. The logarithmic scale produces a more realistic visual comparison because of this.

Bear in mind that having a very bright beam isn’t the whole story when it comes to deciding how good a bike light actually is. There are loads of other factors to take in to consideration when it comes to finding the best light for the cycling you do, such as runtime, durability, ease of recharging; weather sealing; how good the clamping mechanism is etc, etc. It is a start, though.

Any of these lights we haven't already reviewed in full will be getting sent off to road.cc reviewers very soon. Our road.cc light beam comparison engine is pinned to the top of our features section, and will be living on the road.cc homepage throughout the winter. It's also linked in both our best bike lights and best front bike lights buyer's guides.