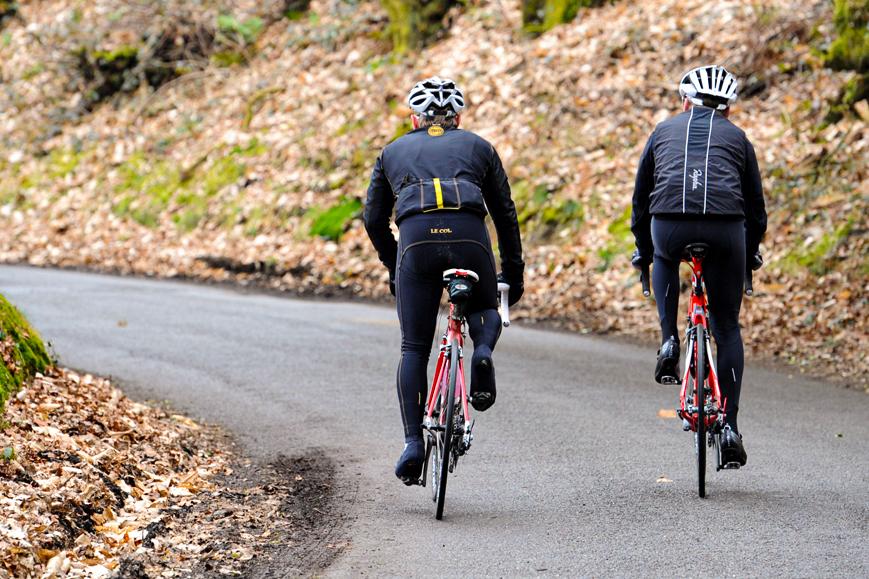 Dr James Noake, consultant in sport and exercise medicine, explains how to spot when saddle pain is more than just soreness, and what to do about it
by Matt Lamy

The relationship between body and saddle is fundamental to successful cycling, but sometimes things go awry and the result can be more than just a saddle sore. Dr James Noake – consultant in sport and exercise medicine at Pure Sports Medicine - explains why cyclists need to know about ischial bursitis, and what they can do to combat it.

road.cc: So what is ischial bursitis?

Dr Noake: It’s par for the course that keen cyclists will get skin redness and soreness. Sometimes there may even be skin breakdown in the backside region, the sitting bone area and the perineum, which is the delicate area between the back passage and the genitals. That’s common, and it usually settles quickly with relative rest. Ischial bursitis, however, is something more significant.

A bursa is a thin, membrane-lined sac. They are all over our body, in areas where there may be potential friction or compression externally. Some of them are there permanently.

Are you sitting uncomfortably?

However, if the thin lining of the bursa becomes inflamed, then it produces fluid and it becomes a fluid-filled sac – that’s when you can see and feel the bursa, and that’s when it becomes painful.

The ischium is the sitting bone part of the pelvis and the bit that rests on the saddle. Although it’s quite unusual in cyclists, if you spend enough time in the saddle then a sac – a bursa – can form just underneath that ischial bone.

That’s called an adventitious bursitis – it’s not already there, but the body develops it to help deal with the friction. That sac becomes inflamed with repeated compression from the saddle.

If a cyclist doesn’t back off the time they spend in the saddle, then that sac becomes more and more inflamed. It produces more fluid and swells... that’s when you get a painful, firm lump (of variable size) under the sitting bone. That makes it almost impossible to sit on a saddle and find a comfortable position.

How can you tell the difference between bursitis and, say, a typical but significant saddle sore?

Initially bursitis and normal saddle sores may appear fairly similar, with quite localised pain when the skin is pressed and local redness. Typically, skin irritation should settle pretty quickly over a day or so.

With a bursitis, that would take longer to settle, and you’re more likely to feel a firm lump in that area, which is the fluid-filled sac – you wouldn’t get that with a saddle sore. It’ll take much longer for that to settle down, as the body tries to reabsorb the fluid naturally as the inflammation settles.

Pain in the a... fterwards

Cyclists often don’t notice bursitis when their adrenaline is pumping and they’re in the saddle – it’s often only when they get home or sit in the car, or they’re at work the next day, that they first notice the pain. Especially when they're sitting on hard surfaces, where it exaggerates the compression between the sac and the ischial bone.

If a cyclist carries on riding and pushes through the pain for too long, then the bursitis becomes much harder to manage, because the lining or wall of the bursa becomes thickened and scarred. Then the fluid becomes walled off and you end up with quite a stubborn, longstanding, painful sac of fluid. 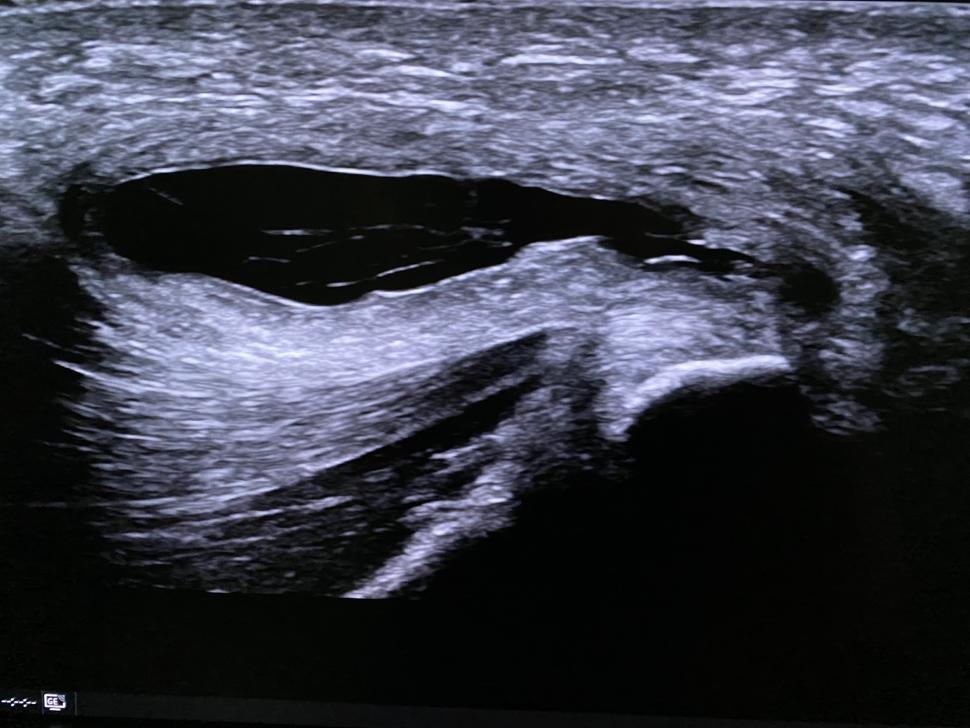 Above: This is an ultrasound scan of an ischial bursitis. The black bubble is the fluid in the inflamed bursal sac while the bright area bottom right is the ischial tuberosity – the sitting bone – to which the hamstrings attach.

Is there anything cyclists can do to prevent it, or stop it worsening if it does occur? I suppose stop cycling is one answer...?!

Yes, but that’s the one thing nobody is going to do! It’s hard to pull anybody back in any sport.

The problem is, it's initially hard to differentiate between bursitis and a normal saddle sore, so after you’ve decided you’re going to push on and keep cycling – if you’re unlucky – you might be developing this bursitis. Then it snowballs quite quickly and becomes a tricky condition to get on top of. So it is hard to decide the right course of action at an early stage.

Staying in touch with our souls

For the cyclist, in the early stages it would be worth feeling around the area to see if there is an actual, palpable lump that seems different from normal saddle soreness and irritable skin.

If you suspect a bursitis is present, then ideally you do have to spend some time out of the saddle. Look at your clothing choice and make sure you’re wearing decent, padded cycling shorts.

If it’s early stages, simple anti-inflammatories such as ibuprofen or naproxen can settle that inflammation and pain to a certain degree, but ideally that really needs to be in conjunction with backing off time in the saddle.

Look at saddle fit, too. Saddles are a very personal thing and a lot of people don’t like changing their set-up, but that might be something that needs to be considered, as well as the design and material.

The problem is, even if you change to a more padded saddle, often that doesn’t help because it just redistributes the pressure to different areas and causes more pain. So having a softer or more cushioned saddle isn’t necessarily the solution.

Having a proper bike fit and a saddle pressure analysis can be key to analyse how the pressures are aligned across the saddle. A few companies offer that service, and looking at the results is really helpful.

Just a subtle adjustment in saddle position or height will shift the weight slightly, to take that compression force off the ischium and bursa.

If there’s a problem with your bike setup and position – or if there's any subtle imbalance in strength around the gluteals, hamstring, quadriceps, etc – it can lead to a shift in position, resulting in increased pressure on one side.

That can actually be a factor in developing a bursitis.

An assessment with an experienced bike physiotherapist – somebody who really understands the biomechanics of cycling – can help to correct that. 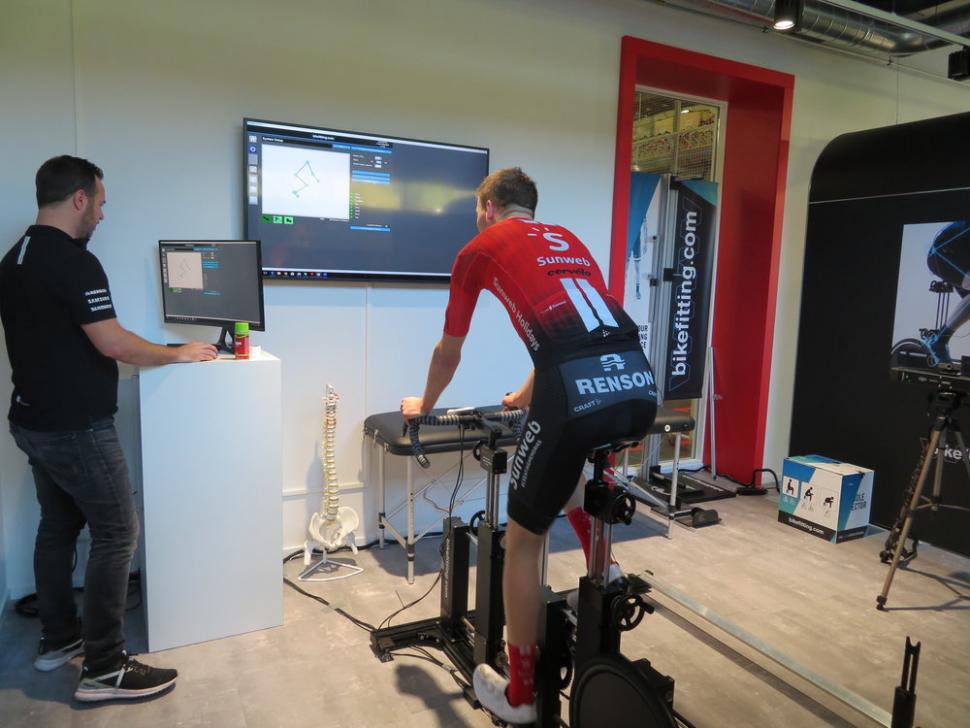 If somebody really has to keep cycling, it might be better to go to a more upright mountain bike set-up, where you might be out of the saddle more frequently, rather than an aggressive road bike.

What are the treatment options for a stubborn ischium bursitis?

Getting an accurate diagnosis first is important. Sports doctors are in a particularly good position to do that, or GPs can refer cyclists to a radiologist to do an ultrasound scan and get a diagnosis that way. Ultrasound is a good way to look directly at the ischium bone and the tissues underneath the skin, and a bursitis is an obvious thing to visualise on a scan.

If a cyclist has a competition or is committed to an event, or if it’s a stubborn recurring problem that doesn’t respond to non-invasive treatment, then an injection and aspiration – fluid removal – can be considered.

> Put down your bike and move slowly towards the door

I had an elite cyclist patient recently who had been experiencing pain over a number of months, and had a very large, painful bursitis. The ultrasound revealed a big swollen sac of fluid and we elected to remove that fluid.

Using a machine and strict sterile procedure, we guided a small needle in and drained it.

Cyclists need to be aware that it can be a risky procedure, due to the potential for infection given the area of the body. It requires a skilled technique and it’s quite an uncomfortable experience for the patient. But it can help to take that fluid out and relieve the pressure, basically decompressing it to make sitting more comfortable.

Nothing good ever oozes

The problem is that it can reoccur because the inflammation of the sac lining is still ongoing, oozing fluid, and it can reaccumulate. That means you may have to go through the procedure a couple of times, and again we have to be careful about how many times you pass a needle into an area due to infection risk.

In very stubborn cases you can take the fluid out and put a small dose of cortisone (an anti-inflammatory) into the sac.

That reduces the inflammation of the sac, but again there's risk associated, because cortisone can cause skin and soft tissue to break down and become vulnerable. That makes a delicate area more prone to pressure damage, which would be a disaster for a cyclist longterm. 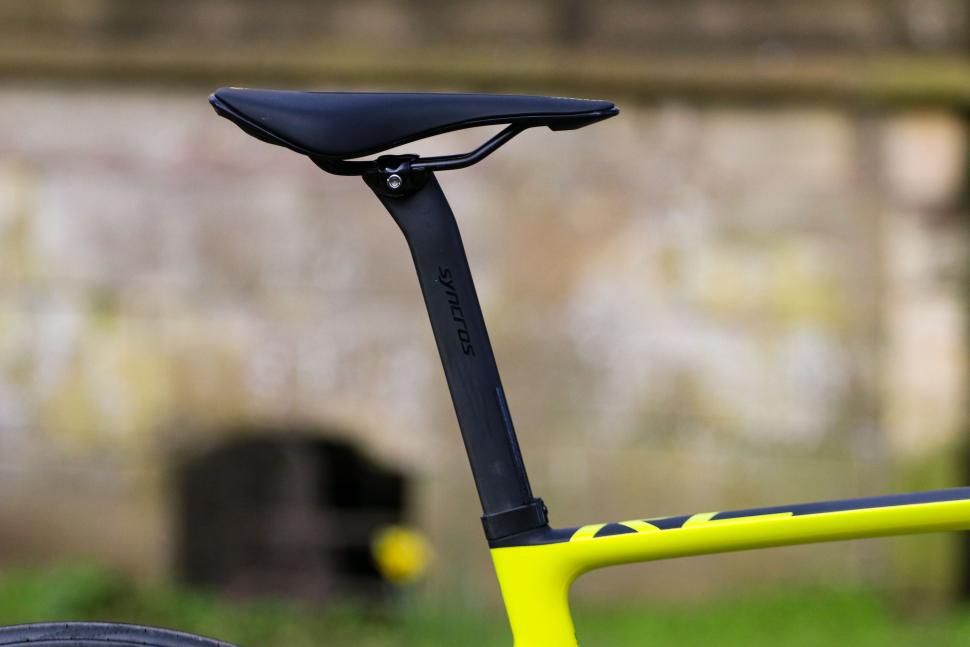 So it’s best to follow non-invasive methods to get it under control early, and look at preventative methods – bike set-up, saddle fit, clothing and so on –over the longer term, before deciding on a more risky, needle-based intervention.

Other than pain, does ischial bursitis cause any other problems?

Yes, and the most obvious effect is on performance. If you’re shifting your weight around on the saddle because you can’t find a comfortable position, then the pelvis and spine is not in a position to create maximal power from side to side.

Cyclists with problems like ischial bursitis often find they don’t have symmetrical power output, and will see their times drop off. That’s often a bigger frustration than the pain.

Taking everything into account, are road cyclists are more prone to ischial bursitis than mountain bikers?

Yes, definitely – it’s far less heard of with mountain bikers. That said, if a mountain biker had a big, crashing impact onto the saddle, the direct force against the ischium bone could cause a traumatic bursitis.

Most commonly, bursitis in cyclists is caused by constant pressure and friction over time. However, a direct blow – which can cause a traumatic bursitis that bleeds into the bursa – can cause just as much pain. So all cyclists are at risk, but I suspect you're more likely to get it if you're in a sustained position, as road cyclists are.

So, if a cyclist finds a lump down there, where should they go? GP first?

That is probably the safest answer, because bursitis isn’t the only thing that can cause lumps in that area, so you’d want a doctor to make sure that there’s nothing else causing the pain. You can get ingrowing hairs – and dark haired, more hirsute cyclists are more likely to get little infected cysts or sinuses around the buttock and back passage area. So it’s worth seeing your GP to make sure those things are ruled out first.

If it’s then a stubborn ischial bursitis and things aren’t getting better with self-directed management, the most logical step would be to see a sports medicine doctor who understands the condition and has the tools to undertake a diagnostic ultrasound in clinic. Once the sports doctor diagnoses it, then you can start treating the problem and eventually be back in the saddle – and hopefully pain free.

> How to get back on the bike if you've been ill