Was this Eritrean colour scheme the loudest in the World Champs Road Race?
by Jamie Williams

Girmay had a quiet World Champs Road Race today by his own lofty standards but his bike was anything but...check out this custom-painted Cube Litening C:68X in the colours of Eritrea. After a second place at the under 23 World Championship Road race in 2021 and a strong season including dominating the opening week of the Giro D'italia, Girmay went into the 267km Wollongong as a race favourite. Unfortunately for Girmay, things didn't go quite to plan and the Eritrean rider was unable to make the front selection, that doesn't stop us ogling at his bike for the occasion though! 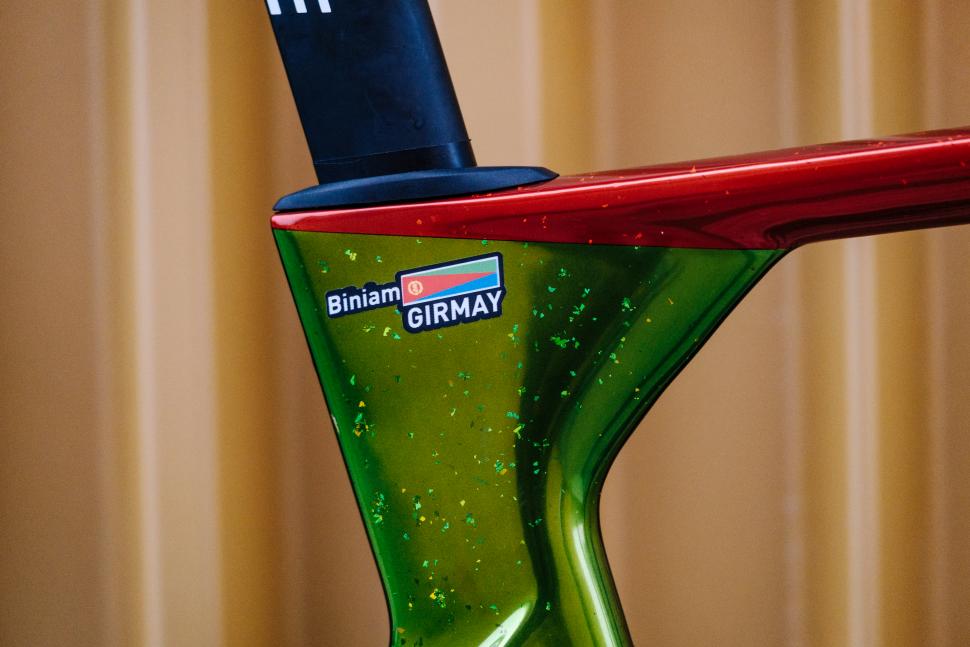 The colours of course are inspired by the Eritrean flag, as you can see from the rider nametag that adorns the Cube Litening C:68X Intermarché–Wanty–Gobert Matériaux team bike. This is the brand's outright aero offering rather than the recently released lighter 'Air' version we saw used at the Vuelta a Espana. The course was by no means flat though with a total of 3,945m of elevation. As a rider for a Shimano-sponsored team, Girmay chooses to use the latest 12-speed R9200 groupset despite the cranks suggesting otherwise. That is the older style R9100 power meter crankset with 54/42T chainrings. Attached to them is a set of Look Keo Blade Carbon Ceramic pedals to keep all that power in check. 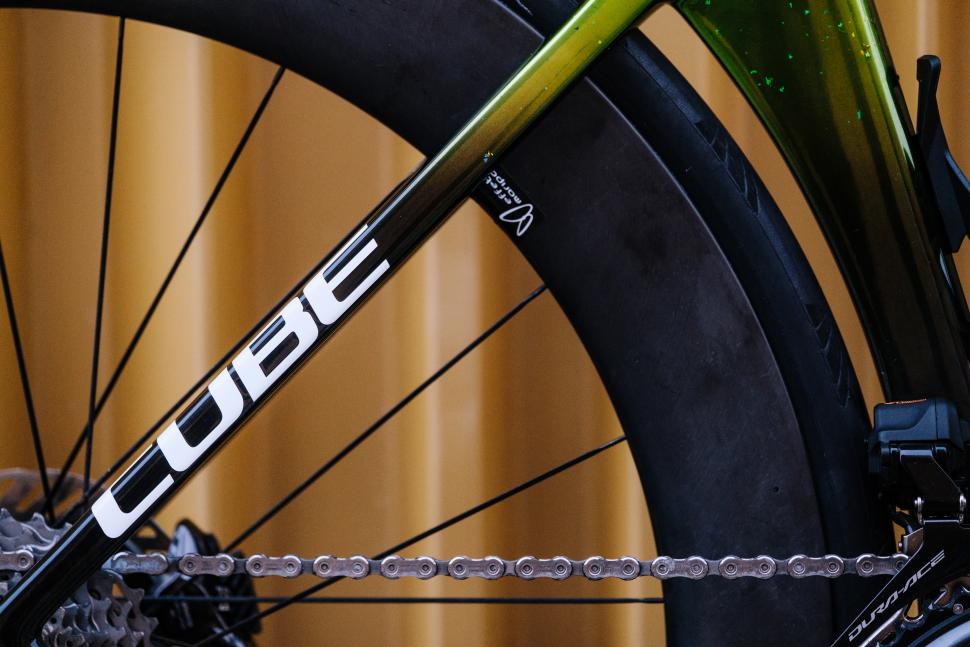 If you look very very closely at the chain you will notice that it is not only waxed but a Shimano M8100 Ultegra version. Now, this photo was taken a few days before the event so it could well have been swapped out for a 'race day' chain but it just goes to show that even the pros aren't always using the top-tier equipment. 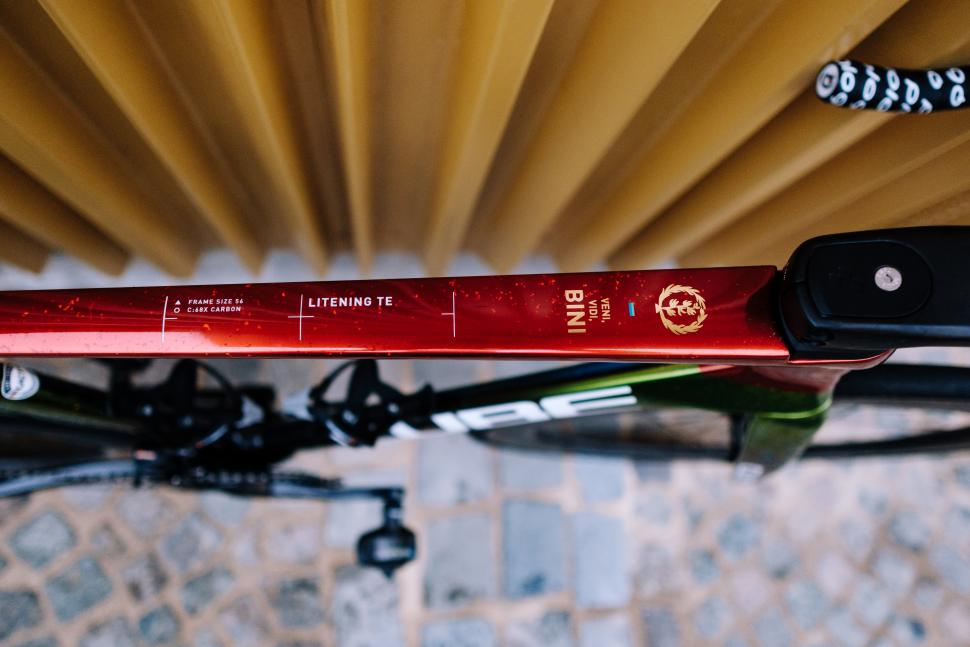 Biniam Girmay is 1.84m tall and uses a 56cm frame, also painted onto the top tube is the frame name as well as "Veni, Vidi, Bini" - a take on the famous Julius Caeser quote Veni, Vidi, Vici - I came, I saw, I conquered. Newmen make a large range of carbon wheels in different depths, Girmay opted for the 65mm deep R.65 Streem presumably in the hope that the race would come down to a fast finish. Mounted to the wheels is a set of Continental GP5000S TR tyres set up tubeless. 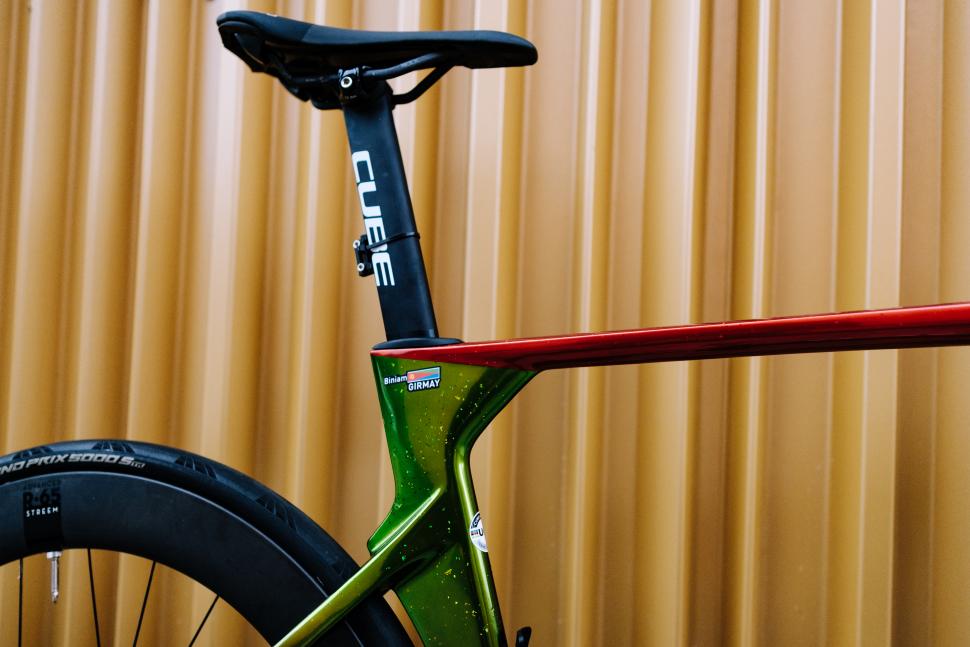 To fit the race-number mount to the seat post the trusty zip tie method has been chosen. Girmay uses a Prologo saddle and bar tape, Elite Custom Race Plus bottle cages and a CeramicSpeed oversized pulley wheel system. 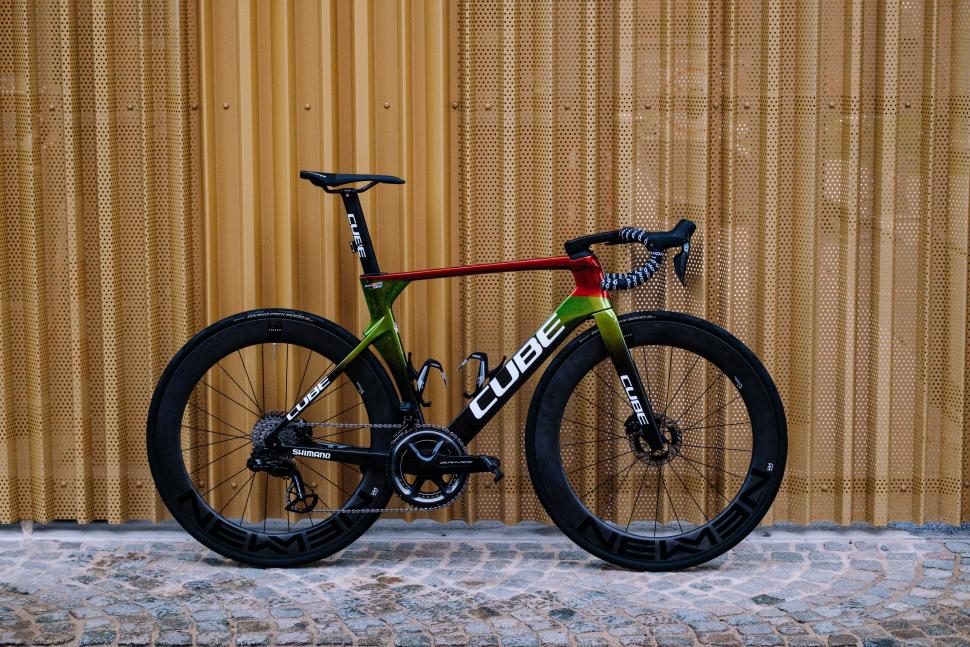 What do you make of Girmay's custom paint scheme? Let us know in the comments section below...