Get out of trouble with 9 more brilliant roadside bodges

We asked you to tell us about your best roadside maintenance bike fixes and you impressed us so much with your ingenuity that we decided to do it again.

We’ve all been there. You’re out on a ride, pedalling along and minding your own business – and then something happens. Something unexpected. Something mechanical, possibly involving an unpleasant noise.

Sure, you’re carrying a pump and a spare inner tube, and you have a multitool squirrelled away, but you can’t carry a complete toolkit and full range of replacement parts in your pocket, can you?

Faced with a situation like this, you’ll often have two choices: get on the phone and ask for someone to come out and save you, or get resourceful. This article is a salute to those who’ve used their ingenuity and initiative to keep riding.

Split tyres are common and road.cc readers have come up with some inventive solutions to get around the problem. Many people said that empty energy gel sachets make brilliant tyre repair patches.

“Just place between the inner tube and the hole in your tyre and Bob’s your uncle,” said Steve Reynolds.

Other readers have used a Primula cheese spread tube (Ken Scott-Clegg), a piece of toothpaste tube (Colin Smith), a silicon mobile phone cover (Paul Worden), a discarded drinks can Andy Horton), and even a sock (Neil Sweetcheeks Marsh), while Eamonn Duffy recommends carrying a laminated playing card in your saddlebag for just such an eventuality.

Riyadh Khamis said, “Tony Gibb fixed my split tyre with a Benson and Hedges fag box and a Monster Munch crisps packet which we found on the side of the road.” 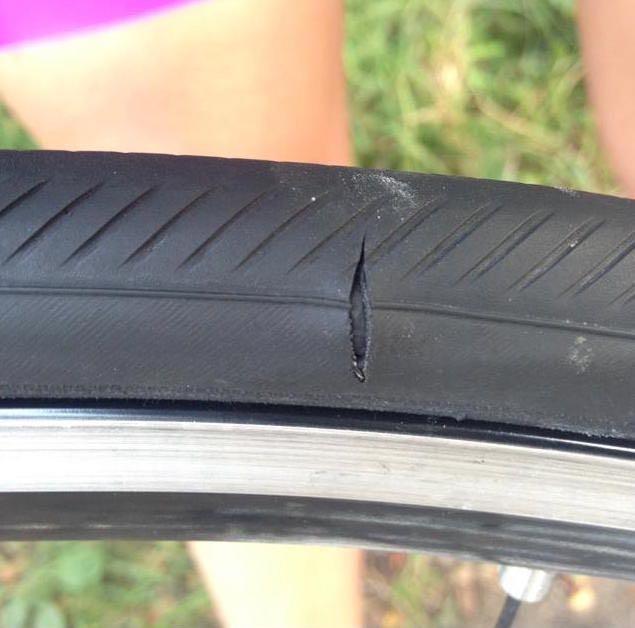 Francesca Rust didn’t go so avant-garde with her choice of material.

“I repaired a fairly decent split in tyre by tearing a bit off the ruined tube with teeth and positioned in place inside the tyre before putting new tube in,” she says. “Got me home 15 miles.”

The most common fix that road.cc readers mentioned for a split tyre was money. It’s international too. Gina Smith has used a US dollar bill, and Steve Large reckons that plastic Australian banknotes are perfect for the job.

“It's a little known fact that the British Pound note has a number on it designating how many psi it is rated for,” said Tim White. “It’s a way of controlling inflation.”

Tim is getting yellow carded for that dreadful joke. (Actually, we secretly quite liked it).

“When I finally gave in and bought a new tyre, I had enough money in the tyre to pay for it,” said Kurt Johnson. Another yellow card!

It turns out that punctures aren’t a problem for road.cc readers. Kia Hogan says that she repaired a puncture with an Elastoplast.

“Worked a treat for 10 miles until I got home,” she said. “Also used a teaspoon as a tyre lever during the same eventful ride.”

And how come she happened to have a teaspoon about her person while cycling, but no tyre levers?

“My father reckons he could fix a puncture with a postage stamp!” said Paul Phillips.

We'd like to see a photo of that one, Paul.

Kia Hogan (above) isn’t alone in using a plaster for a quick fix.

“I used a Very Hungry Caterpillar plaster to cover up a spoke hole in the rim that the rim strip kept sliding away from, causing repeating punctures,” said Scott Church.

Paul Woolgar says that he used a dried-up leaf when he had a similar problem. Inventive, huh?

Dave Moulding says that when his mate’s last tube popped, they found the hole, ripped the inner tube in two at that point, and tied the ends together in a knot. Then they re-inflated the tube and used one of Dave’s mitts fill the gap that was left. The repair got him home.

Carl Millington did something similar in this year’s Cheshire Cat Sportive.

“I rode 10 miles to the next feed station,” said Carl. “Done the job. A bit scary going downhill in the wet.”

Yeah, we imagine it was! Gareth Hunt used two cable ties to isolate a hole in his inner tube.

“I pumped up the tyre to a get-me-home pressure [and] to avoid the obvious flat spot where the puncture was I stuffed ferns and grass into the tyre so it stayed in shape,” said Gareth. “It lasted all the way home!”

Everyone has heard of stuffing foliage into a tyre, but not too many people have actually done it. Craig Jermajesty Osborne (below) has. 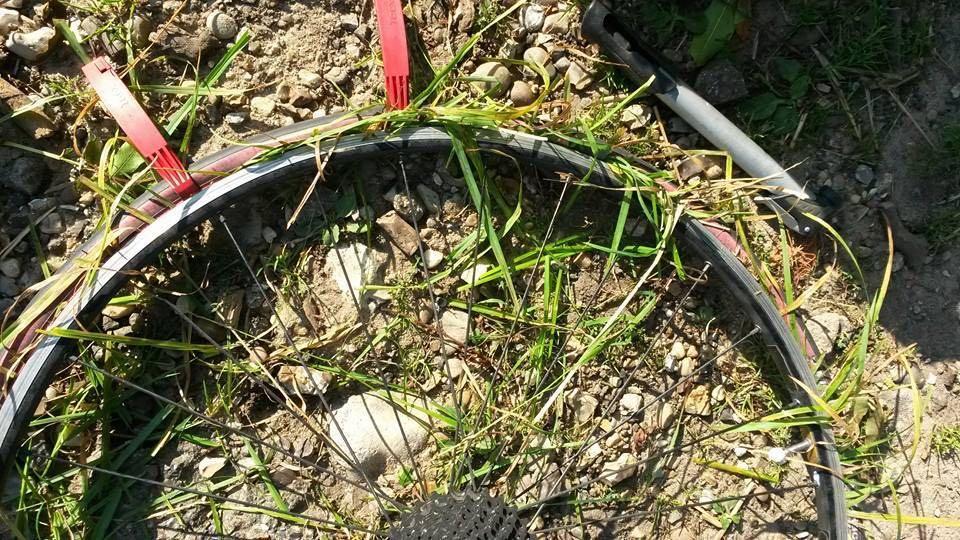 “I didn't pack a spare inner tube so did this,” he said. “It was a pain to get on to the rim but got me home without damaging the wheel even if it looked a bit like what Worzel Gummidge would ride on.”

Nothing wrong with that, Craig!

“I once had a puncture on front tyre and decided to wheelie all the way home,” he said.

Excellent idea, Luke. How did you get on?

“It lasted about 10 meters! Then walked.”

If your chain snaps and you don’t have a chain tool with you, don’t despair. 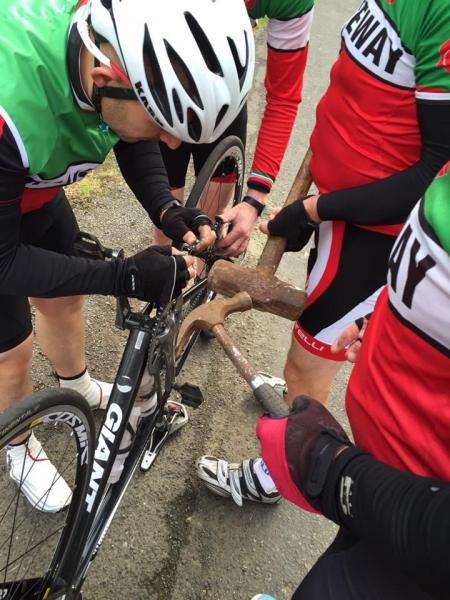 Gareth Peden says that this (above) is the best chain repair he’s ever seen. Love it! What’s the worst? And where did they find those hammers? 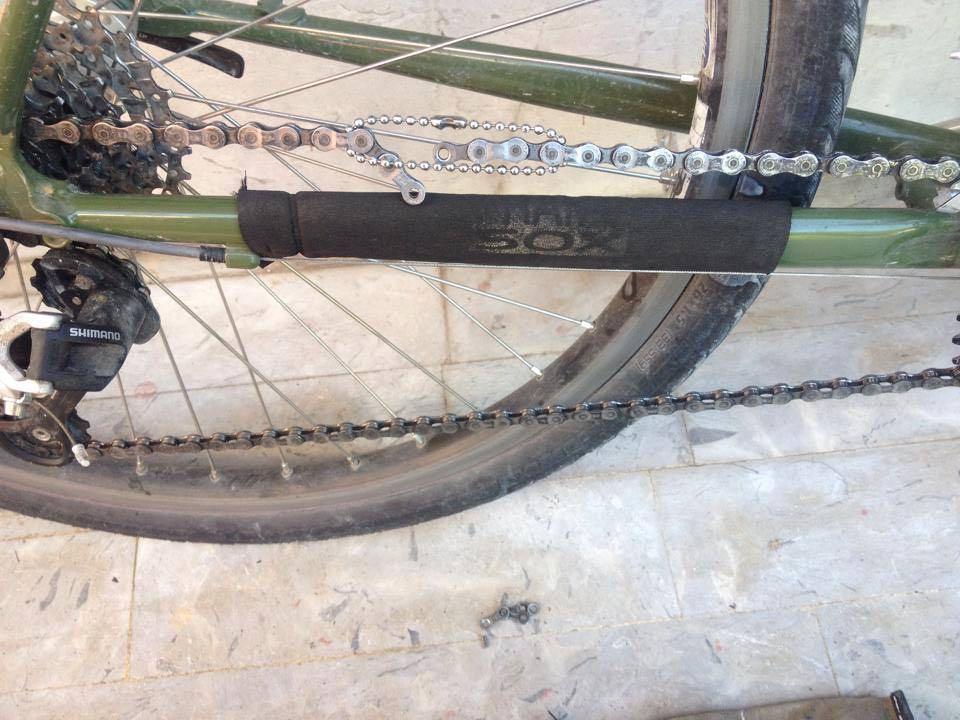 It looks like Jonathan Hopkins (above) used a similar level of ingenuity when riding from London to Croatia.

“My chain snapped and I found that half of my chain tool was missing from my bag and I couldn't get the twisted broken link off,” said Dominic Cox. “A plumber was visiting a house near where I was (middle of nowhere) and he had a tap and dye set in his van which worked as a chain tool.”

A bit of left field thinking there, but not as left field as Bert Graef’s solution.

“Chain snapped. After walking a few yards, I said the hell with this, lowered the seat and used the bike as a two legged scooter to get home.”

If there are any limits to the inventiveness of road.cc readers, we’ve not found them. Oliver Meads took a snapped pannier in his stride when just 10 miles into a 180-mile, three-day ride across France. Did our man panic? Nope.

“Ten minutes and €10 euros later it's fixed and withstands the ride,” he said.

What apparatus did he use to accomplish the repair? Four spoons, two shelf brackets and a few cable ties. Inspired! Cable ties featured in a lot of the repairs you told us about.

“My brother’s wheels rim split on the Way of the Roses,” said Andy Thompson. “Nothing a few cable ties and gaffer tape would not fix!”

It looks as good as new, Andy. 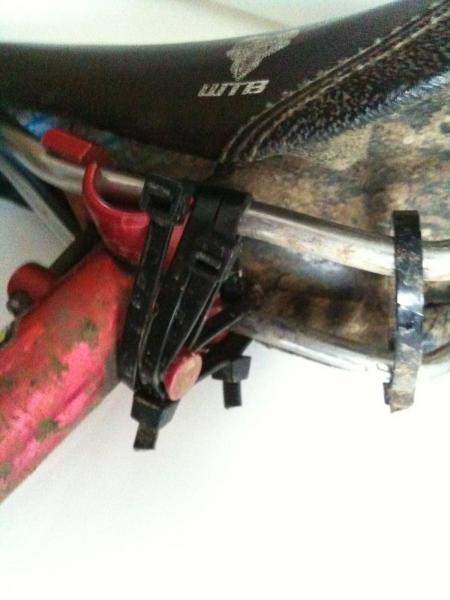 “How about the cable tied seat mount fix?” asks Lee Attwood. “It was good for 25 miles home and the next ride."

The next ride?!? You were pretty pleased with it, then! 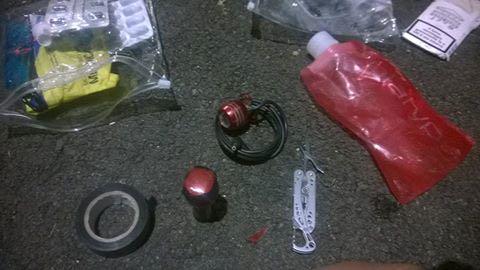 “I took my spare front light, a clear red water bottle, some electrical tape, scissor multi-tool and, with the A-team theme in my head, made a makeshift rear light,” he said. “It lasted through until Croatia where I bought a real light.”

Croatia again. Did you see Jonathan Hopkins (see above) there?

“My bike disintegrated on a recent ride,” said Olly Jolley. “I whittled a new frame out of a wayward piece of silver birch and now they call me the silver surfer.” “Four of my five chainring bolts fell out mysteriously 25 miles from home and I could not pedal anymore, so I removed the plastic bridles from my Garmin's speed/cadence sensor and used them to keep the chainrings in place,” said Varón Dandy.

That is mysterious alright. Looks like you did a fine job though. 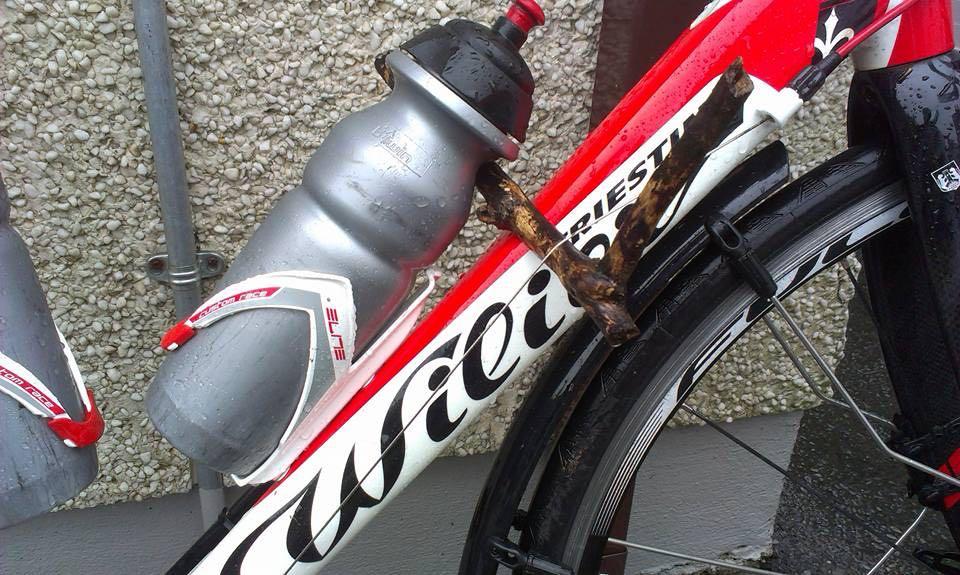 “I pulled this shifter out (above) of the hedge,” he said. “It worked a treat.”

Ouch! Hope the paintwork survived it.

If you have anymore roadside fixes, tell us all about them below.