Specialized has made its Diverge gravel bike a full suspension machine. We sent Liam to Germany to ride it and report back
by Liam Cahill

Specialized put itself in a bit of an awkward position last year with the launch of its new Crux. Its cyclocross/gravel bike featured the same tyre clearance as the Diverge, was lighter and faster too. So it was only a matter of time until its proper gravel bike, the Diverge, got an update. And it’s quite a big one.

Yep, Specialized has gone full gravel with this bike, adding suspension to the rear end with the aim of suspending you, the rider, from the bumpy stuff. The new system is called Future Shock Rear and it provides 30mm of tuneable, hydraulically damped travel. The shock is adjustable on the fly and there is further adjustability thanks to a replaceable frame post. Two posts ship with each bike size and these can also be rotated by 90º to switch between and stiffer and softer orientation. 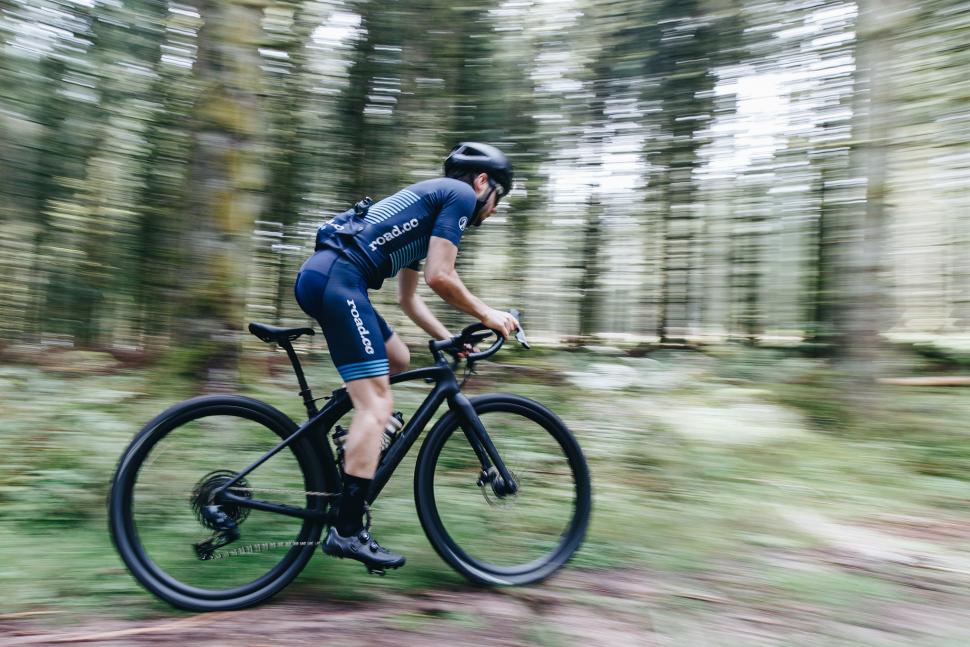 There’s a lot going go at the back end, but I’ll start with my initial impressions of what this thing is actually like to ride.

Taking the bike out, I started with a little over 10km of road riding to get to the gravel. Here, the bike feels completely unremarkable which might come across as a negative, but I promise that it isn’t. Despite Germany’s roads being delightfully smooth for the most part, there were still plenty of cracks, drains and manhole covers to aim for. With the Future Shock Rear set to the softest setting, these bumps were tamed, though not completely ironed out. It was also easy to see the system doing its thing. Watch a rider next to you hit a bump and the seat tube, seat post and saddle all appear to be removing themselves from the front of the bike.

> Full Circle - are MTBs the next gravel upgrade?

This sensation is tangible on the bike too. Shove your weight through the bars while you’re sat in the saddle and the top tube feels as though it is lengthening. Of course, I spent many minutes entertaining myself by trying to break the bike in two, but once over the initial novelty, the system settles down into simply providing comfort.

I will point out now, however, that you’re not changing the saddle height when you hit a bump. It’s more the reach that extends. Anyway, we were soon onto the gravel and the first climb highlighted an area where this system is both good and not so good.

Climbing on gravel is not so dissimilar to a road climb. You’re fighting your way up a hill and having to pedal quite hard. A gravel climb, however, can also mean picking a line through rocks and riding over some of those rocks. 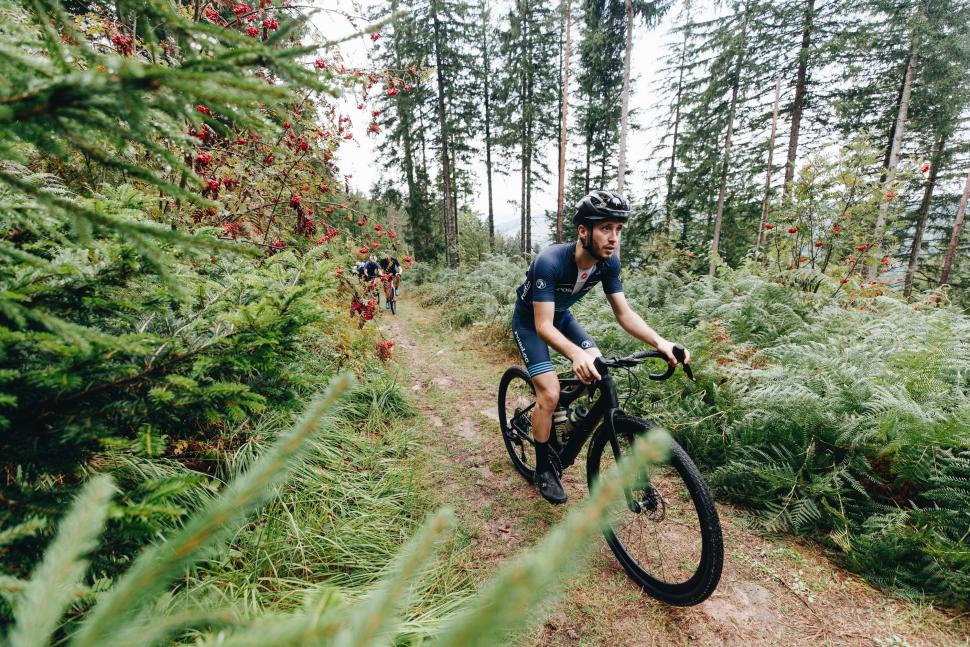 The good part of this system is that the bike remains very calm underneath you. I didn’t feel as though I was being bounced from rock to rock

But as the climb got steeper, I found something that I’m not so keen on. If you’re having to mash the pedals to keep yourself moving forward while also manhandling the bike to get it up and over larger rocks, the movement of the saddle really isn’t helpful. This is where I would flick the small lever on the shock to stiffen up the system and get my saddle fixed in place. 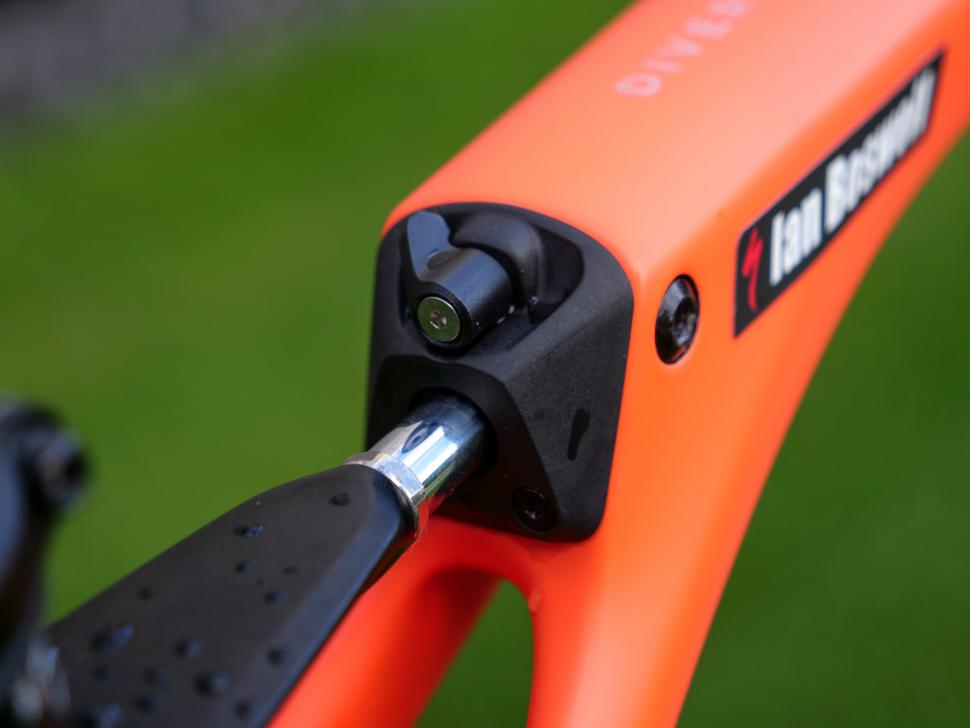 There is an issue with that, however. The lever needs to be bigger. Fumbling around for it with anything other than warm, dry hands is difficult at best and it’s location is in a place where you don’t want to be looking. Ok, the system looks tidy, but for usability, I’d have preferred a larger lever.

> All of the tech details are right here [LINK]

Future Shock 2.0 is still at the front end and it still works really well. You just get a bit of comfort for your hands and, despite being an out of the saddle climber, I didn’t find it to be too squishy when heading uphill.

If you do, there is an easy-to-use dial on the top cap so that you can lock it out or set it to a middle ground. Descending with this setup suggests that the Diverge is going to be one of the calmest gravel bikes on the market. Some might think it is a bit dull and others are likely going to love the control. All I’ll say is that I have been flying down gravel trails for two days and I’ve had a blast doing so. 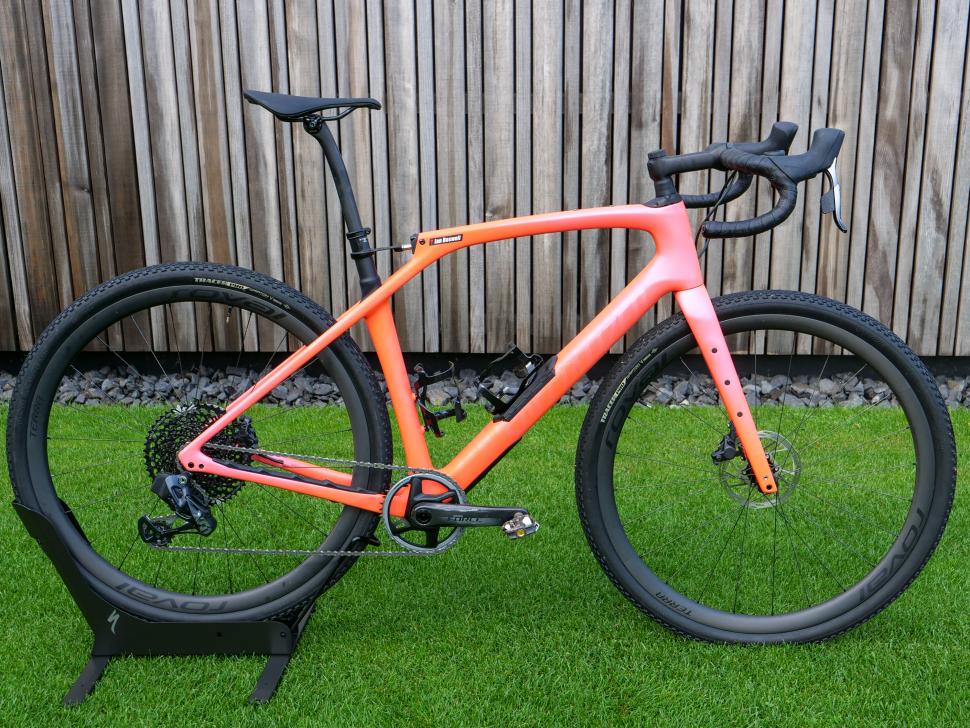 Ok, enough about bouncy things, the rest of the bike wants some attention. The geometry is pretty much identical to the old bike with the only notable change being an extra 5mm BB drop.

The new frameset, with the new Future Shock Rear does lead to a 400g increase in frameset weight. I was on the Rival ETAP AXS model, the heaviest in the range, and the bike did feel a bit sluggish on the steeper climbs, with extra muscling required to pop the bike over larger rocks on technical climbs. It might also lose out a little in tighter corners, but I’ll leave that to off.road.cc to test properly. 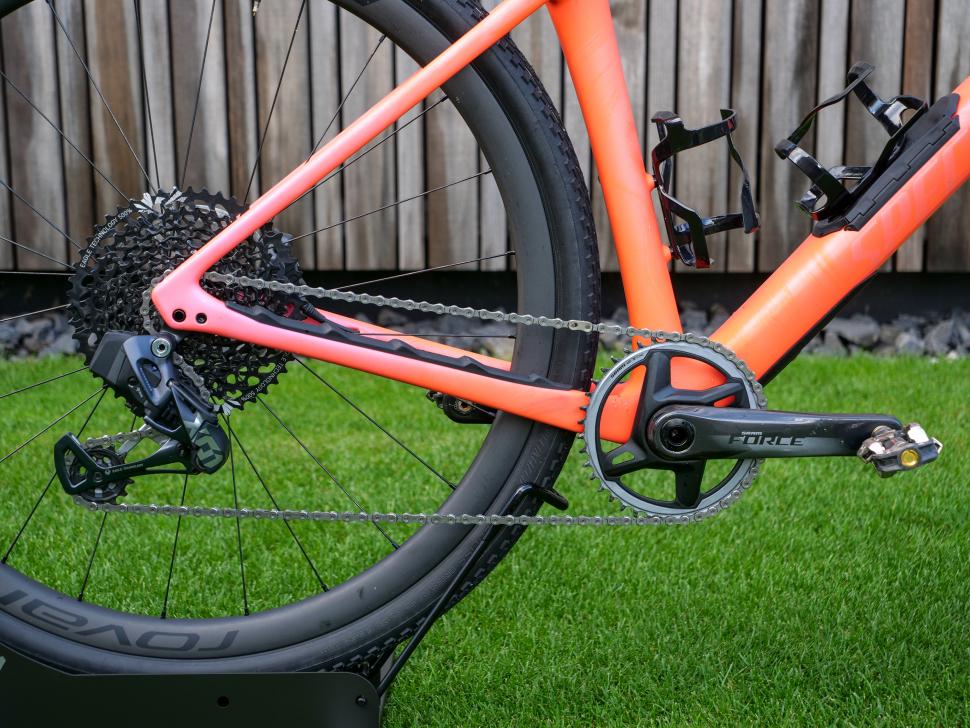 The groupset was set up with some big gears from SRAM’s XPLR bike range and as a result, there was a spinny gear for pretty much every situation. The bike came with 160mm front and rear and braking was good, though, for me, I’d have a 140mm rotor on the rear as I was prone to a little lockup here and there.

Things we still need to look at. 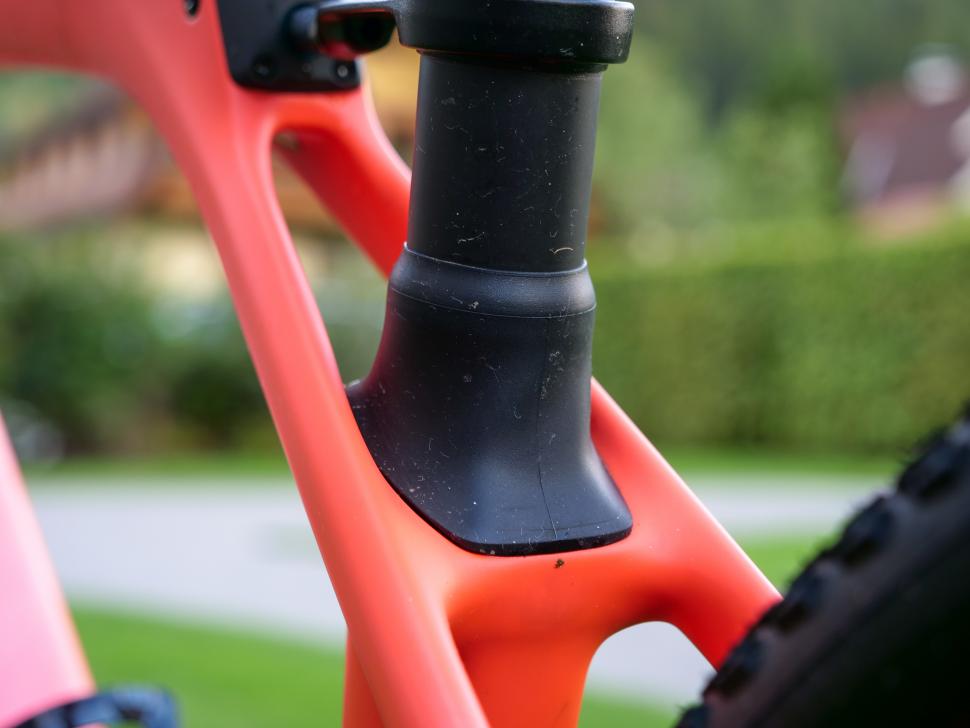 The replaceable post is something that I wasn’t able to have a play around with so once it is back in the office, we’ll break out the Allen keys and see how easy it is to both turn the post but also to swap the post out for a different one. We’ll also check to see if you can actually notice a difference between posts.

Another thing to test is the rebound adjustment. Speaking with the bike’s designer, Chris d’Aluisio, it transpired that while Specialized has worked this adjustment into the system so that people can make changes, you’re unlikely to be able to really notice much of a difference, so we'll be testing out that claim. 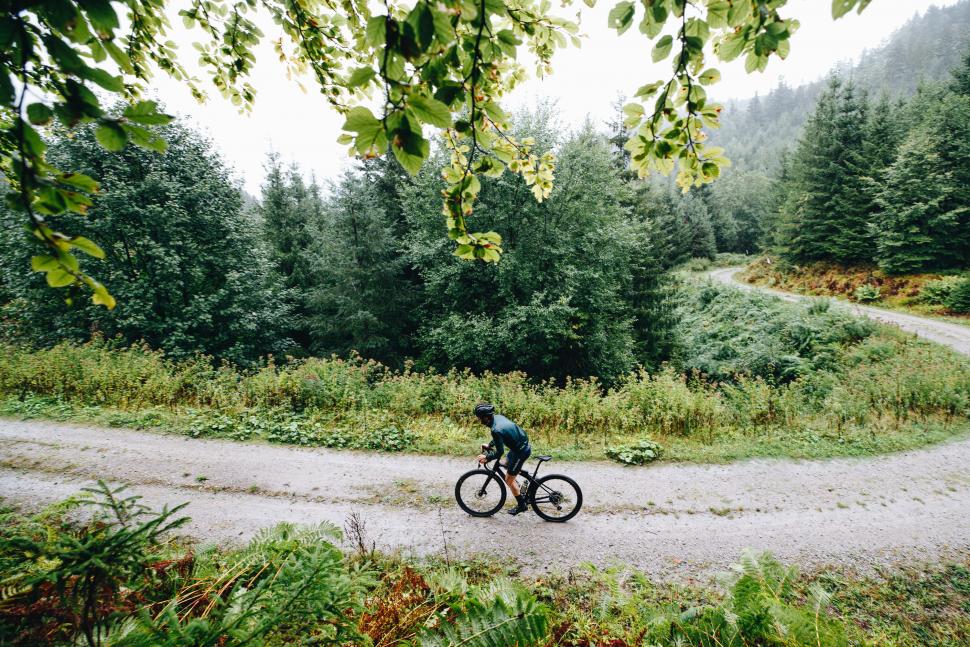 So what’s the verdict? Well, the bike is heavier than the old model, but the Crux does lightweight gravel now, so that isn’t the focus. It is whether this new bike is more capable, or more comfortable than the old model. I would say that the rear end, which is pretty much all that the new bike boils down to, is, over certain terrain, a genuine comfort improvement. What we rode in Germany was a little bit limited in variety, so I think it’s only fair that we get the bike back to Suvi and Aaron on off.road.cc so that they can put it through its paces on the stuff that they know.

Personally, however, I think that this is going to be a marmite bike. You’ll either think that the rear end is super comfortable, or you’ll think that it moves around too much. Me? I liked the comfort gain. It helps a little bit with pedalling over rough ground and descending is really nice on this bike because it is so calm. Steep climbs saw me closing off the shock, but that is a small thing. If you want comfort from a gravel bike, then you could do a lot worse than the Diverge STR.