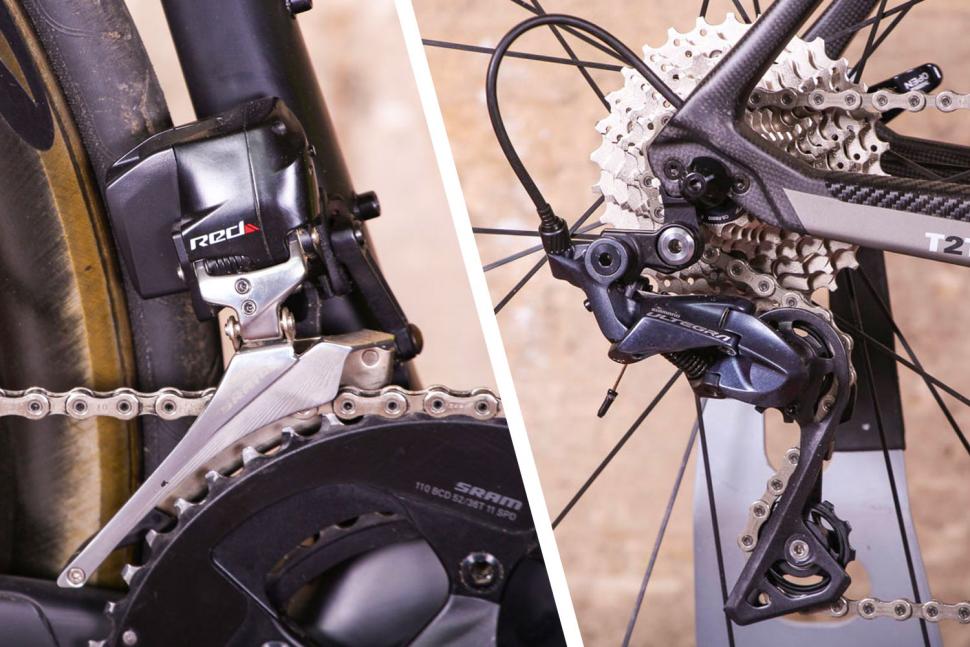 Bike gears: find out why bikes have so many, and the surprising way they're measured

I still feel that variable gears are only for people over forty-five. Isn't it better to triumph by the strength of your muscles than by the artifice of a derailleur? We are getting soft... As for me, give me a fixed gear!

Your gears do a simple but vital job, varying the speed the rear wheel turns for a given pedalling speed. But how do you choose the right gearing for you? And how many gears do you really need?

One way or another the clever, delicate mechanism of bike gears has always been a source of controversy. Henri Desgrange, editor of Le Velo, the sports newspaper that organised the first Tour de France was not a fan, as the quote above shows. Every time component makers add another sprocket, cycling forums erupt with complaints about increasing complexity and forced obsolescence. Off-road, though, mountain bike gear systems have been driven toward simplicity, with a movement in recent years toward fewer total gears not more. 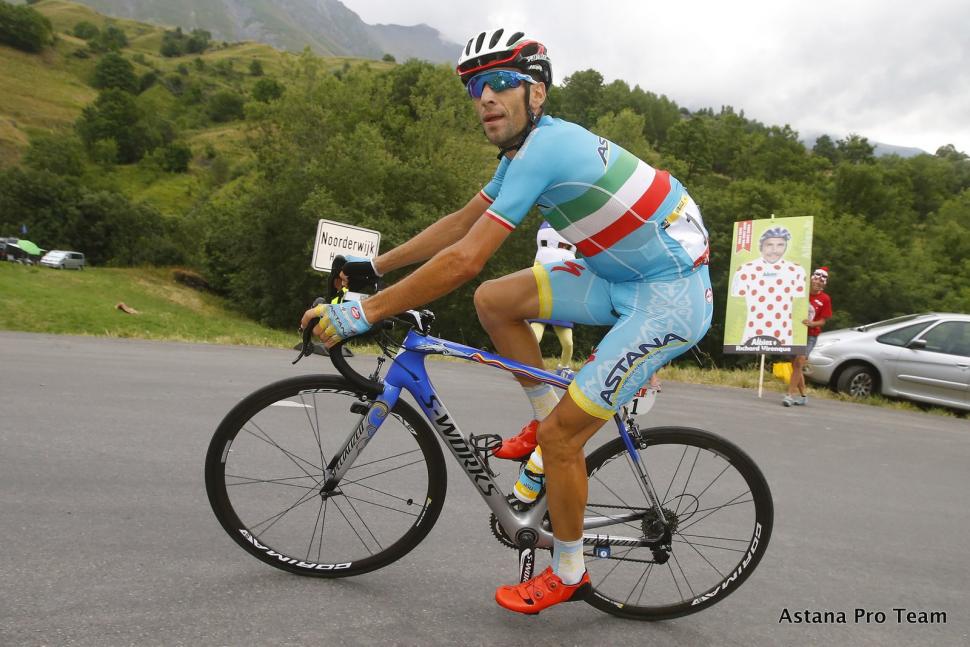 But why do we need gears anyway? What’s wrong with conquering hills “by the strength of your muscles” Desgrange-style?

The answer comes from evolutionary biology. Early humans were 'persistence hunters' pursuing their prey till it was exhausted. We didn’t have a jaguar’s ambush ability or the sprint of a cheetah, so we relied on the endurance that today lets us run marathons and ride centuries.

That means we evolved to produce a steady effort for a long time, at a fairly narrow range of power. Gears allow us to take that narrow power band and turn it into a wide range of speeds suitable for everything from grinding climbs to whooping descents.

Mechanically, the principal is simple. If one sprocket drives another via a chain, the speed of the driven sprocket comes from the ratio of the sizes. A 48-tooth large sprocket driving a 12-tooth small one gives a 4:1 gear ratio. 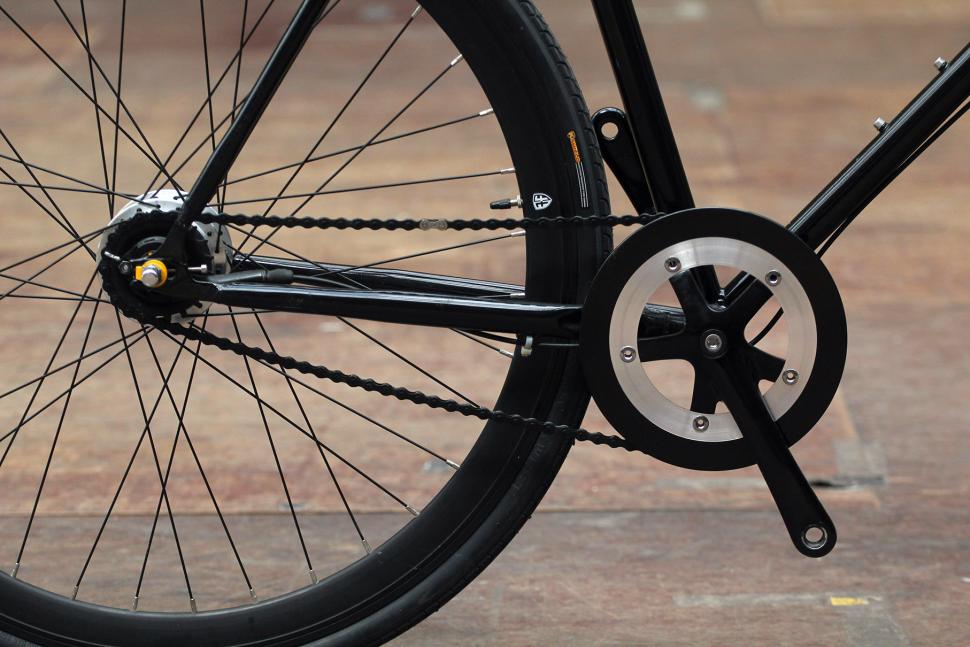 Working out the ratios of all your gears would tell you which were bigger and smaller, which is easier than trying to remember whether 53/16 is bigger 39/12. But you do end up with a load of very similar-looking decimal fractions.

There are two ways of turning that ugly set of decimals into friendlier numbers. On the Continent, gears are expressed in metres of ‘development’, the distance travelled for one turn of the pedals. Here’s that gear set for a standard 700C wheel with a 25mm tyre. It yields numbers that at least have a real-world meaning, but that are still messy decimals. 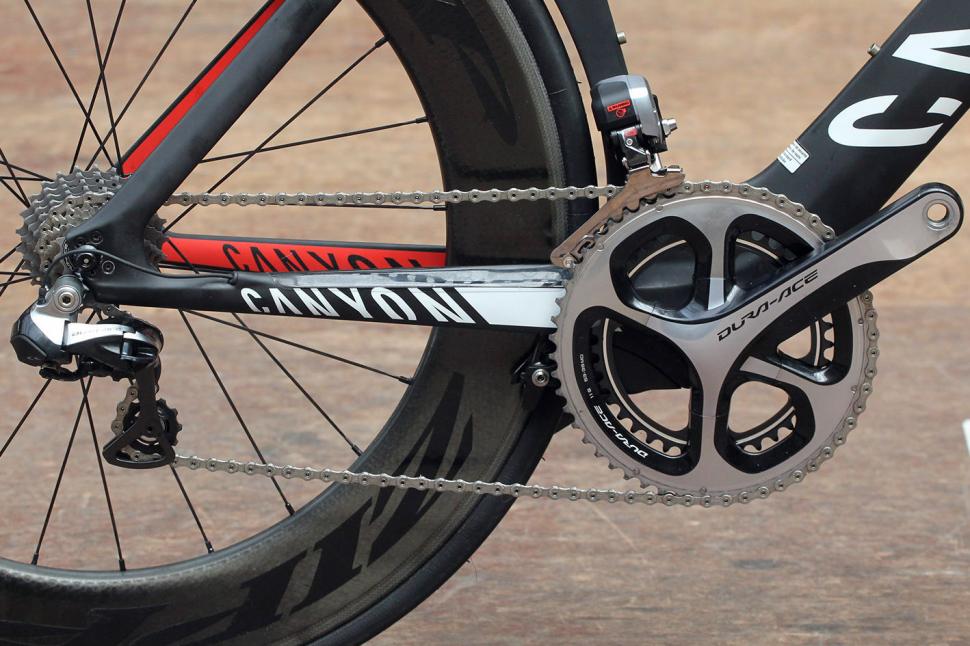 The alternative, still used by gear nerds in the English-speaking world, is ‘gear inches’. Here’s our race gearing chart again, in inches.

Wormelow Tump (noun): Any seventeen-year-old who doesn't know about anything at all in the world other than bicycle gears.

— The Meaning of Liff by Douglas Adams and John Lloyd

You’re probably wondering where these numbers come from. The answer requires a bit of cycling history. 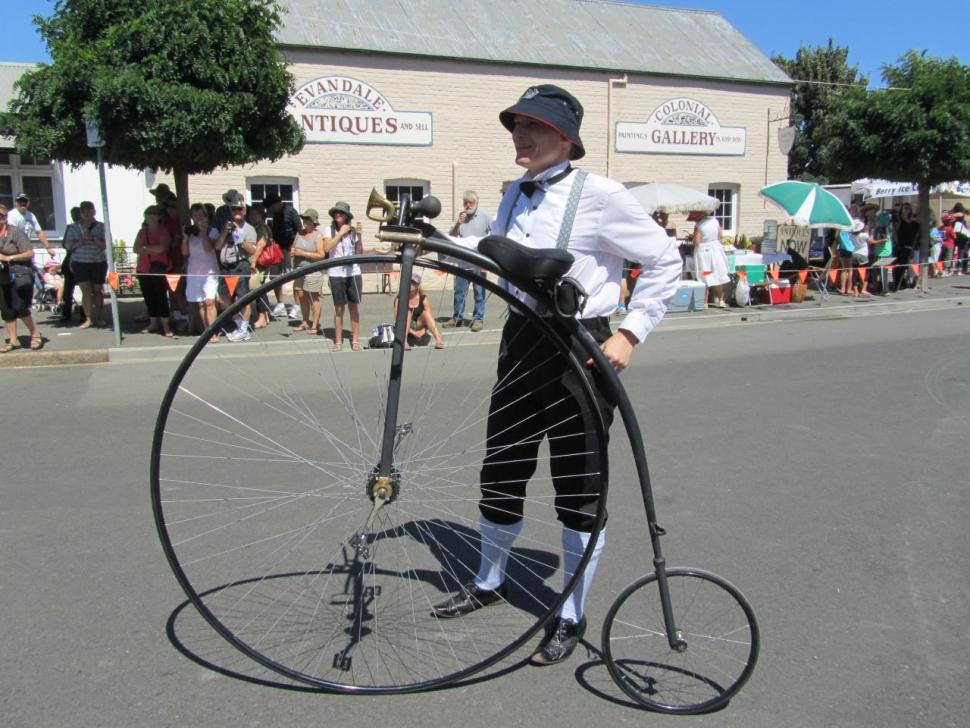 Before bikes had equal-sized wheels and chain drives, the world of cycling was ruled by high-wheelers, the bikes often referred to as ‘penny-farthings’. Because the pedals drove the wheel directly, the gear of a high-wheeler was determined by its size.

The larger a wheel you had, the faster you could go, so riders used the largest wheel that allowed them to reach the pedals. This being Victorian England they expressed the wheel diameter in inches.

To calculate a gear in inches you multiply the raw gear ratio by the wheel diameter. That gives you the size of a high-wheeler with the same gear. Accuracy to a single inch is all that’s needed so they’re rounded.

In keeping with tradition, the nominal wheel diameter used for road bike gear inches calculations is 27in.

Gear inches give you nice, easy-to-handle numbers and I’ve a soft spot for their quaint Englishness, so that’s what we’ll use through the rest of this article.

If you want to take gear nerdiness a step further, check out this article by the late, great bicycle sage Sheldon Brown, which proposes a system for expressing gears that takes into account crank length too.

To give you some idea of what typical numbers in gear inches translate to in the real world, at a cadence of 90 rpm, the lowest gear, 42-inch, gear on our race bike will see you doing 11mph. In a 66-inch gear, you’ll be cruising along at just under 18mph, and in the top, 130-inch gear you’ll still be able to keep up with the pedals at 35mph.

The difference between the highest and lowest gears is referred to as the gear range. As you can see from our example, racing cyclists use gear set-ups with an emphasis on high gears and a relatively narrow range.

That also means the steps between gears are close. Racers like that because they can pick exactly the right gear that lets them pedal at the cadence at which they’re most comfortable and efficient, and they’re fit enough that the lack of lower gears isn’t an issue until the road gets insanely steep.

For less serious riders, gear range is probably more important. How low a gear do you need? How high?

Let’s take a look at the gear ranges you get with some typical gear set-ups.

The lower gear range you get from a compact chainset is why they have become so popular in the last decade.

Throw in a slightly wider range at back at things look like this:

With its WiFli transmissions, SRAM has taken this to its logical conclusion, combining a compact chainset with a very wide range cassette.

It’s relatively rare to find anything but a double chainset on an off-the-peg road bike, but bike makers still offer triples on touring bikes, hybrids and a few road bikes. Taking ideas from mountain bikes, some makers of cyclocross bikes and gravel road/adventure bikes are using single chainrings. 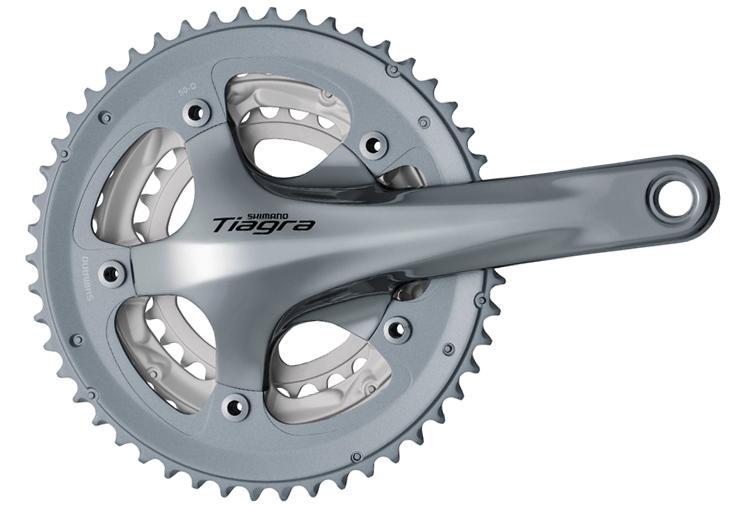 The advantage of a triple is that, done right, it can provide a very wide gear range with small gaps between ratios. The disadvantage is that even with the best indexed gears it can be a struggle to have the shift to the middle ring and down to the inner ring work perfectly.

Here’s a typical road bike triple set-up, as you’d get with a Tiagra triple chainset and 10-speed cassette.

Compare that with WiFli gearing or even a standard compact and fairly wide cassette and one thing is obvious: you don’t get a much lower bottom gear for the extra complexity.

However, use the right components and you can go much lower. Here’s the gearing on a Dawes Super Galaxy tourer, which uses a Deore XT chainset intended for European 'trekking' bikes:

If you’re carrying a heavy load or riding in very hilly terrain — or both — that 21-inch gear low gear will let you winch up just about anything.

It's not usual for gear freaks to custom-blend set ups that go lower still. My tandem has an 18in low gear, provided by a 20-tooth chainring and a 30-tooth sprocket.

One ring to rule them all

Single chainrings have become popular among mountain bikers for their simplicity. You can’t fluff a shift if there’s no shifting at the chainring. Racers like not having to think about front shifting, while for recreational riders who have adopted height-adjustable seatposts it declutters the handlebar.

Chainrings for double and triple cranksets are designed to make it easy for the chain to come off, so it can move to the next ring. That makes them unsuitable for use as a single rings. Chainrings with different teeth shapes, known as thick/thin rings, help solve this problem, combined with a rear derailleur that includes a clutch to stop the lower run of chain going slack. 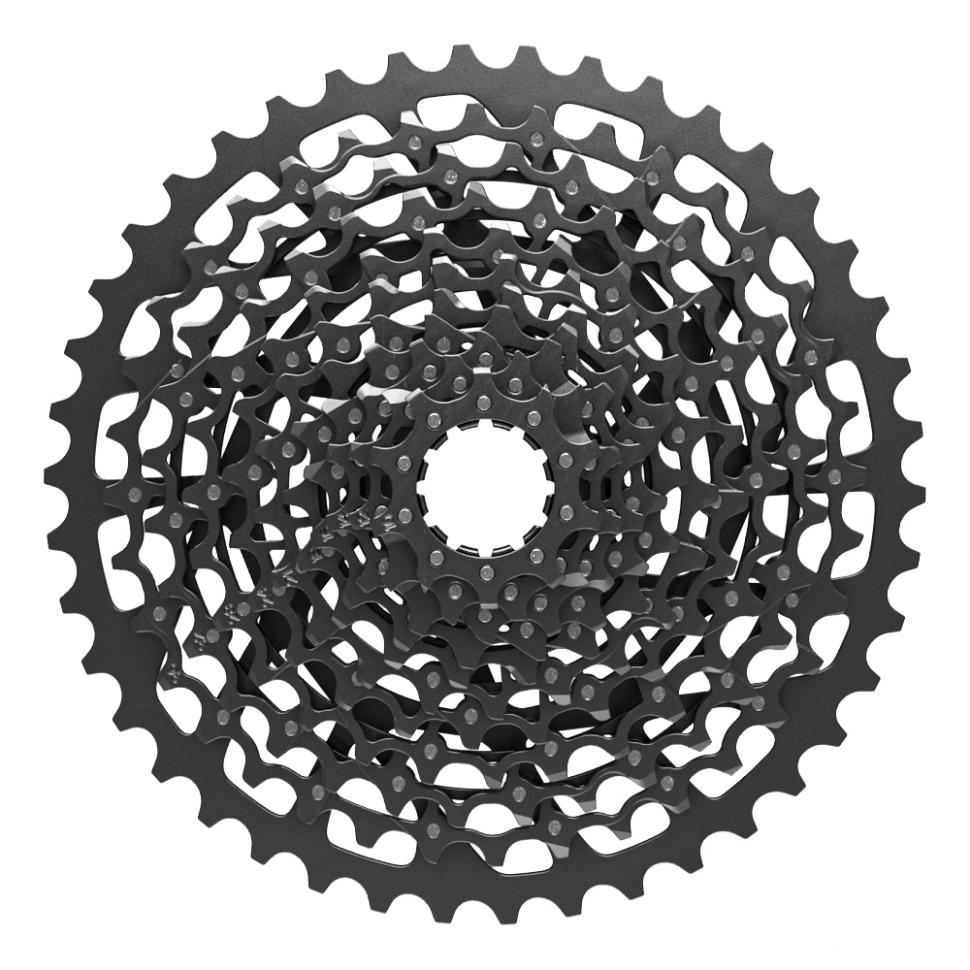 To get a wide spread of gears, single ring systems use 10 or 11 sprockets ranging in size from tiny to huge, as you can see in the above pic. Here’s a SRAM 1X spread:

The price for simplicity is that compared to other ways of getting a wide gear range there are some big gaps in there. The middle sprockets do give you a useful selection of ratios for general riding though.

If you want to play further with gear ratios and their effect on speed and cadence, there’s a great tool at gear-calculator.com

And if you've made it all the way down here, you deserve this kind of tripel: 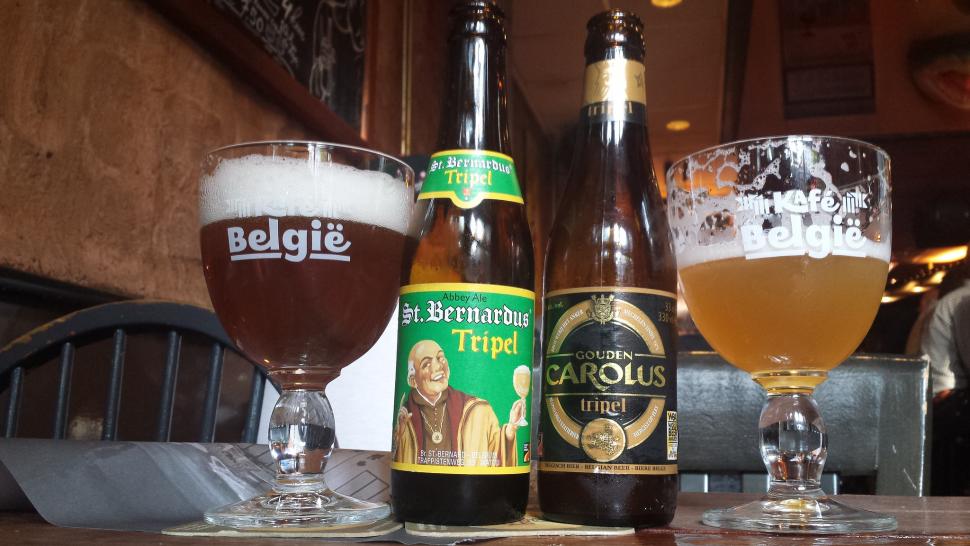