In the first of a series of three guides Dan Heaton, Fantasy Cycling admin and top-20 player, looks at the tactics for reading a race and how it affects who should be in your Fantasy team

Hello! And welcome to this guide in which I, an average* fantasy cycling player, try and help you to get the most out of the game by imparting some of my accrued knowledge and a few useful tips.

I’ll go through some of the basics and highlight the most important things to consider when picking your team. If you have any questions pop them in the comments at the bottom of the article and I’ll try and answer them as best I can.

Unsurprisingly the key to performing well in the game is picking the right riders at the right time. To do this though there are a number of key things to consider. In this, part one, I'll go over what to look for on each stage and the basics of picking riders. In part two we'll look at the points awarded on each stage and how to pick your team to make the most of each stage. And in the third part, we'll look at transfer strategies and how to plan your changes. So, let's begin.

The biggest factor in who will win a race or a particular stage is the stage profile. In essence, what’s the terrain like? Will it suit a sprinter like Mark Cavendish or a climber like Alberto Contador? Reading a stage is never an exact science but over time you get a feel for how a race will finish. That being said, even the most inexperienced fantasy player can look at a stage at take a good guess at how the day will play out. For example:

This is the first stage of the 2013 Tour de France. It looks bumpy but if you take a closer look the day never goes above a height of 147m above sea level. In the grand scheme of things, when compared to the mountains later in the race which top out at 2000m above sea level, this stage doesn’t feature anything that will trouble anyone. Even Marcel Kittel.

On a flat stage like this it’s very difficult for riders to get away in a break and stay away all day so it’s likely that the main body of riders, the peloton, will finish together. When that happens it’s the sprinters who’ll contest the stage win. Riders like Mark Cavendish and Andre Greipel, who are fast finishers on flat stages, will be up near the front and racing hard to take the stage win.

On the other hand though we have stages that look like this:

This is stage 8 of the Tour de France which features two large climbs at the end of the day. These climbs are categorised based on their difficulty: how long the climb is, how steep it is and how technical it is (whether the climb is straight or twisty and whether it’s a proper road or a dirt track etc.) all factor into the climb's rating. The lowest rating, as seen in stage 1, is Category 4. These are minor bumps and won't affect the stage. Category 3 and Category 2 climbs are longer, steeper and harder but not so hard as to trouble the true climbers. A Category 2 climb in the middle of a stage may cause enough problems for sprinters, though, that they can’t make the stage finish with the main bunch.

Category 1 and HC (Hors Cátegorie - above classification) climbs are the hardest climbs featured in the race. These are brutally long and steep climbs to high mountain passes. Stages featuring Category 1 and HC climbs will almost always favour pure climbers like Pierre Rolland or Alberto Contador and some of the hardest may also put good climbers like Cadel Evans or Thomas Voeckler into difficulty.

As you can see, the Col de Pailhéres reaches 2001m above sea level and will likely cause big splits in the race with only the strongest climbers left at the summit. This is then followed by the easier Category 1 Ax 3 Domaines, but a summit finish is where the GC riders will be looking to make time on their rivals. Stage 8 is certainly the type of stage where riders in contention for the overall crown will stay close to the front and fight for the stage win.

No matter what terrain, though, a race will usually take a standard format. This will involve a small group, usually 3-10 riders, getting into a breakaway where they race ahead of the main group and try and stay out in front for as long as they can. On flat stages the teams of the sprinters will let them go then work to reel them in close to the finish so that their designated sprinter can compete for the stage win. On mountainous stages things are less predictable but some teams will work to the same plan and try to bring the breakaway back to the group so that their rider can attack for the stage victory. The break is important, because as we'll see in part two it's not just rolling over the line first that gets you points...

As well as normal road stages, many races all include time trials. The 2013 Tour de France actually includes three: 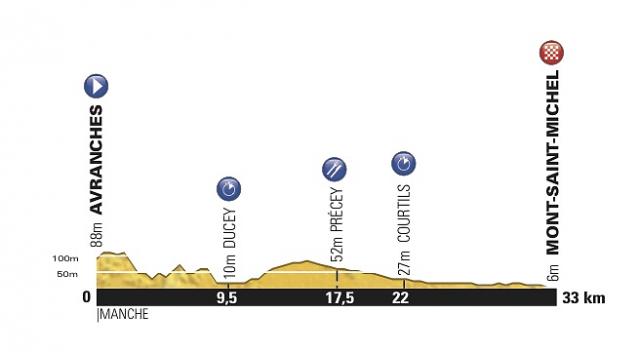 Time trials require a particular skill set and it’s hard to pin down one type of rider who has this. Some of the strongest climbers can time trial while others are hopeless. Some sprinters can time trial while others are unable to sustain a good pace for long enough. Riders like Tony Martin and Fabian Cancellara are true specialists and often take the stage win but the places behind them can feature all manner of riders.

Like other stages profile and stage length count for a lot and the result of a relatively flat stage like stage 11, above, will be very different from a mountainous or very technical time trial. On a tight and twisty mountainous time trial strong climbers often perform better and this is something to consider when picking your team. Likewise a prologue, a short time trial often under 5km in length, suits sprinters and riders who can sustain a high pace for short distances much more than a long 35km time trial would.

Team time trials (TTT) are different again as it's less about any one rider and more about how well drilled a team is. A team who have trained hard and perfected riding in formation could well take a TTT stage despite not having any of the strongest individual time trial riders.

If you've checked out the stage profile and just can't work out who's going to feature then there are other options.  The first is to hit the internet and search for race and stage previews.  Many cycling websites will preview a race and the riders taking part; some specialist sites will even go as far as to preview each stage individually.  The latter in particular will give some of the most useful information such as whether the race is going through a rider's home town or whether a stage profile is misleading.  Take what you read with a pinch of salt though: most sites will plump for the most obvious choices without really doing any research or repeat the 'wisdom' of other sites rather than doing any work themselves.  The best sites will give considered details of the stage and analyse the main riders' chances.

The second option is to hit the gambling websites.  Bookies are not fools and if someone is a red-hot favourite for a stage they'll let you know.  Bookmakers websites will also give you a good idea of what type of rider is favoured. If the top favourites are all sprinters you can be fairly sure the stage will come down to a sprint finish; if they're climbers then expect an exciting day in the mountains.  Like many of the previews the odds will often just show the obvious picks but if nothing else they'll give you a feel for what type of stage it's expected to be.

Once you’ve read the stage profile and had a good guess at what types of riders will feature at the end of the stage you can try and pick them. Riders in the game are split up into different types. These are:

General Classification (GC) - riders who score well across different types of terrain whether it is in the high mountains or on a time trial. Only the best riders over the last 12 months get this rating. GC riders are likely to be strong in the mountains, strong during time trials and feature heavily on a number of stages. A rider like Chris Froome epitomises these features.

Climbers (KM / King of the Mountains) – riders who score well in the high mountains, these are generally strong climbers who should feature on the toughest stages. While strong in the high mountains KM riders can struggle during time trials and may not feature on multiple stages preferring to target stage wins over a high overall finish.

Sprinters (PC / Points Classification) – riders suited to the flat stages and fast finishes. The riders to pick on stages you think will come down to a sprint finish.

All-rounders (AR) – the riders who can do almost anything and may feature on any day. Riders like Peter Sagan fall into this category but so do former general classification contenders like Cadel Evans and breakaway specialists or strong classics riders like Sylvain Chavanel. A mixed bag of riders and a catch all for those who aren’t true specialists or who can score on different terrain.

Domestiques (DS) – Support riders or those who don’t score as heavily as the main contenders. Domestiques can feature on any given day but don’t often win stages. Most Domestiques are lesser known riders working for their more illustrious team-mates but many are talented racers in their own right, capable of winning stages. Domestiques also cover those riders who were once great but haven’t scored highly in the last couple of years. Andy Schleck, Jerome Coppel and John Gadret have all featured in the top 10 of major races in the past but have dropped in value thanks to poor recent results, at under 10 credits they’re possible bargain picks for the mountains but unreliable and risky.

Thanks to the budget restrictions in place in the game you can’t load your team with just super stars so the difference between a good day and a bad one can often rest on your cheaper picks. Domestique picks are the most unpredictable and often hardest to get right but can score heavily on the right days. Domestiques also tend to make up the members of each day's breakaway.

In part two tomorrow I'll go over how to use this information to pick a team and how to manage your team to get the most out of your picks.