Museeuw – 2010 bikes and some flax stats

Their fans say nothing beats flax. Why? We look at the science… and some new bikes
by Neil Hassan_Frameforum.org

One of the more welcome distractions for bike journalists during the second rest day of the 2007 Tour De France was a press conference by none other than the Lion of Flanders himself, Johann Museeuw.

But the Leeuw wasn't here just to add his support for protégé Tom Boonen's bid for the points competition or speculate whether or not Rasmussen could hold the yellow jersey all the way to Paris.

No, Museeuw was here to introduce a new range of race bikes bearing his name to the Worlds' press. Product launches are 10-a-penny during the Tour, and unfortunately, another big story was breaking on the other side of town; the sending home of race leader Rasmussen by his Rabobank team. Those lucky journos who took the time to attend the Museeuw meeting went away with an unexpected surprise; the scoop on a genuine bike- tech first.

Johann wasn't showing off any old bike either, something sourced in the Far-East and dressed up in go-faster stripes. The Museeuw range was altogether different; here was a bike from a new material, which had been in development for three years before its launch and promised to deliver something other than just marketing spin. What the Tour media circus got was a new word with which to conjure when writing tech reports on the latest in frame materials and technology; flax.

Flax fibre itself is nothing new; it has been around for a long, long time, traditionally found in products as diverse as fine, hand-woven lace and in the rigging of great sailing ships. Flax grows in abundance in the west of Belgium and the north of Ireland. In fact, flax flowers are depicted in the flag of the Northern Irish Assembly and is a feature in coins and banknotes produced by the Province. Flax shares many characteristics with the people of both Flanders and Northern Ireland; hardy stock who flourish despite the harsh climate and even harsher environment.

So it's not surprising Museeuw, the toughest in a long line of tough Flandrian champions, recognised in flax a rugged ability to stand up to whatever the elements could throw at it, and at the same time, capable of producing something of great beauty and finesse - like Museeuw's epic win in the 2000 Paris-Roubaix, a masterclass on how to win a bike race in style . 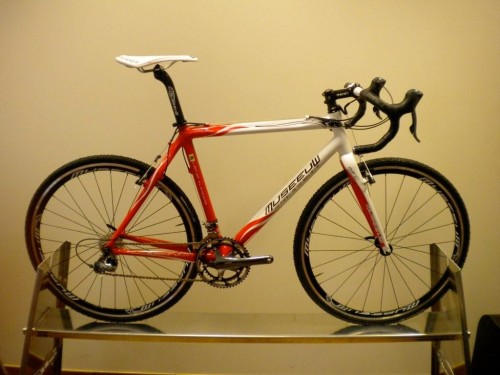 Three years on from that eventful July day in Loudenville and Museeuw is preparing to unveil his 2010 range of carbon/flax models to the media and trade at Eurobike. This year Museeuw will be unveiling a whole new range with the flagship MF-One (se the chrome/red model) which is 80% flax content - as high as they can go currently topping it off.

Even more excitingly A 100% flax model is in the works and there should hopefully be a prototype at Eurobike. The rest of the range is rounded out with the 'MC' line; six models with varying flax content to hit a number of price points. For this, they add flax stays,  forks or down tubes, depending on the model and price band. They hope to make the flax technology to more accessible to more riders and have added cyclocross and track models. So, what makes bikes made with fllax so special? 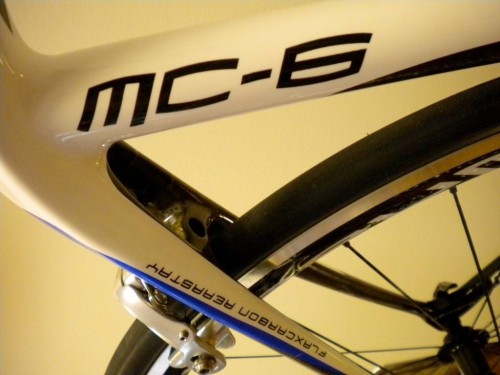 Much has been said and written about the properties of flax and whether or not it merits a place on top of the list of exotic materials. But ask anyone who's ever ridden one and they'll all agree; this is a material with properties like no other.

Flax ticks all the boxes in terms of rigidity and low weight, but far from trading off stability, strength and comfort in favour of pandering to the misinformed, it adds a whole new dimension to what is possible when given the right materials to work with.

The Museeuw approach has been to determine how far you can 'ride-tune' a frame through the strategic application of the chosen material. This comes through a thorough study and understanding of how those materials will perform once constructed into a frame. But the most important factor recognised by Museeuw, is that without the expertise to harness and manipulate the potential of the material, the favourable characteristics are lost and inevitably, yet another run-of-the-mill frame is produced.

That's why Museeuw sought out the best when building the team behind his bikes. In much the same way he'd hand-pick riders to support his bid for a World Championship or Classics win, Museeuw has brought together the finest brains in composite technology as well as a team of framebuilders led by legendary Italian framebuilder Roberto Billato, in charge of Museeuw product design one with impeccable credentials backed up by an almost unparalleled list of winners on his client list. 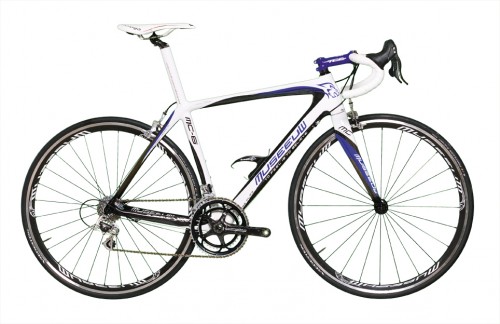 Up until now, the Museeuw philosophy has been to let their product do the talking -  in much the same way Johann let his legs do the talking in the Classics.

However, in order to answer the critics who would dismiss the Museeuw range as just another collection of overpriced bikes trading on an ex-racer's past glories, they've commissioned a series of independently-produced reports explaining exactly what it is about the Museeuw flax composite that produces such unique qualities and where the advantage lies when compared to 'ordinary' carbon frames. The findings will be released in full at a press conference held during the trade and press days of Eurobike, but we have has been given and advance 'sneak peek' of the results and can give a brief outline of what all the numbers mean.

Carbon fibre, (like steel or alu or titanium), has common characteristics regardless of the source of the material. In the case of carbon, this is because at microscopic level, the individual strands making up the material all perform in the same way to whatever stresses, strains or vibration you subject them to. It's the vibration that determines that all- important 'feel'. The rider will feel, (to a greater or lesser extent), whatever vibration is transmitted up through the wheels and out along the frame and fork. It's how much the frame transmits of whatever is going on under the tyres determining how much a rider feels in their shorts and through the handlebar tape.

Carbon weaves consist of woven strands, and in turn, those strands consist of microscopic filaments. Contrary to popular belief, Its only when you get down to filament level the damping occurs. As good as carbon fibre is at being light and strong, it can only dissipate shock in specific frequencies. So some – but not all – of the shock is absorbed. Adding more carbon might appear to be a logical solution for tuning-out vibration, but this usually leads to a frame with the dreaded 'wooden ride' characteristics. Chucking more carbon in the pot is not the answer.

Which leaves the rest of the vibration to be handled by the rider. Absorbing shock is a major energy burner and as a result, the more shocks on the rider, the faster the rider is pushed towards the point of discomfort, followed by the onset of fatigue. 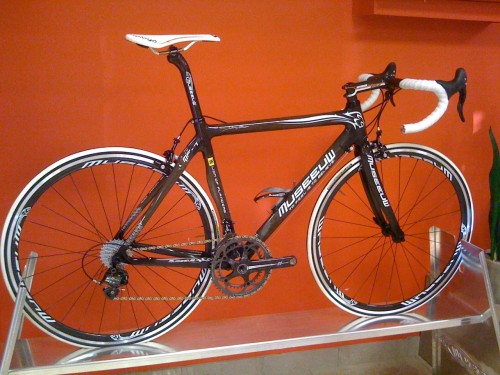 That said, each and every rider has his or her threshold of pain determining how hard and how long they can ride or race. All riders are subjected to shocks just the same; no one is immune from vibration.

However, ask anyone who's ridden a Museeuw how it 'felt' and they'll all tell you the outstanding characteristic was the smoothness of the ride.

It's right down at the microscopic level the secret of this smoothness lies. Whereas carbon filaments are equal in their ability at handling only a specific range of frequencies, flax filaments all react differently, each filament coping with a different range of frequencies and as a result, damping a far greater range of vibration than carbon - or any other material - can.

The greater the flax content, the more buttery the ride. Not only that, the high-flax content composite, thanks to its superior absorption, will demonstrate far greater road-holding qualities. Here's one scenario; a stiff-wheeled, carbon-framed bike ridden full-tilt over cobbles is likely to act like a bucking bronco, whereas a Museeuw, kitted out with the same wheels and components - but with its flax composite frame – will glide effortlessly and with far greater control, over the bump and grind of Belgian Pavé. That in turn, leads to less physical demands on the rider and increases their ability to stay with the pace.

But without proof, all this is just marketing spin. 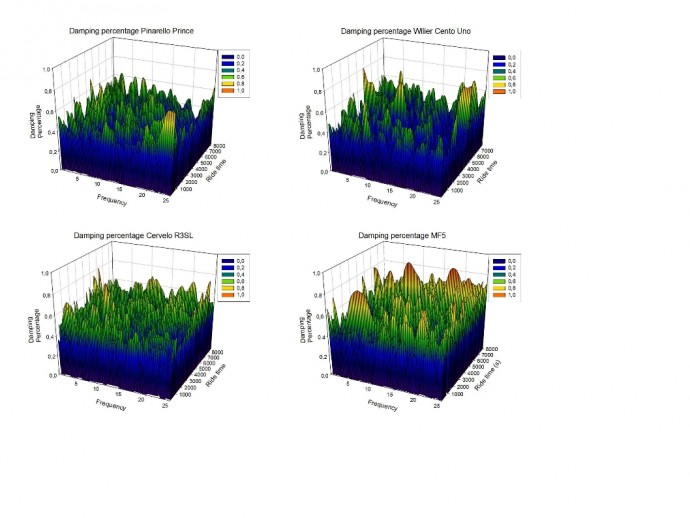 So over the last year, Museeuw, in association with IPA Composites (who make the composite for Museeuw Bikes) and the Engineering faculty of the University of Ghent have been putting a Museeuw MF-5 to the test and analysing data . And not just on a Museeuw bike, but also bikes built around frames used at the highest level and which would undoubtedly feature in the top ten of any 'dream bike' list.

The bikes in question were the Pinarello Prince, (bike of the 2008 UCI World Cup winner), the Cervélo R3SL (Tour de France-winning bike) and the Wilier Cento Uno (World Champ winner).

Stiff competition whatever way you look at it.

Each bike was fitted with five accelerometers at all the key points of the bike that determine ride quality. From these sensors, the collected data was then analysed to produce a map of how each bike performed in terms of damping performance. When the four are stacked up together, its clear from the graphs how well the Museeuw flax-based frame stood up against the competition.

In short, the subjective claims of the many happy Museeuw owners (and those fortunate to have ridden one in tests) are now backed-up with an objective set of results confirming what they've known all along; the Museeuw does offer the smoothest of rides and they are undoubtedly one of the finest performance composite frame available today.