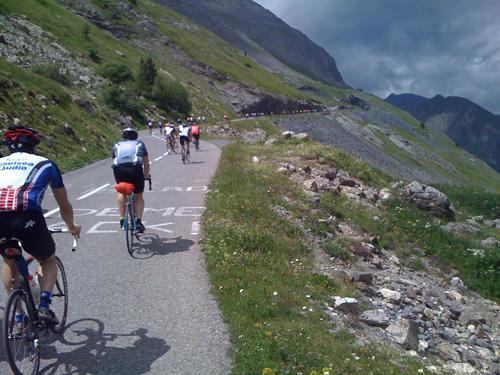 John McFaul takes on the might of the Galibier and the Alpe...
by McFaul

The Saturday of the Marmotte was possibly the most emotional day I’ve ever had on a bicycle. Packed with legendary climbing, the Marmotte is tough. Tougher than anything else I’ve done. I was a bit below par on the day due to illness, but that's by the by: this is a serious bit of riding on roads which are the stuff of dreams, and there was fellowship, pain and tears along the way.

Dave, Chris and Mike arrived in the Doblo late Tuesday evening and in went the bikes. Dave, wizard that he is, managed to get the best part of a bike shop in that car. Bags in, bikes in and boys in… off we went to Newhaven to catch the 9.30pm to Dieppe. Then it was a straight run down to Alpe D’Huez and Dave’s flat on hairpin 16 - Joop Zoetelmek. It's a wonderful place with an equally wonderful bar downstairs. I’m not sure Phillipe, the owner, makes too much of a profit as the delicious food is so damn cheap it's ridiculous… and he tends to forget to charge for the drinks, as we found out each evening. Lovely guy.

The day of the ride dawned bright and from Bourg we flew down the valley to the start of the Glandon and the climbing began. We all bunched up at the top with the new timing system and then the true reality of the course dawned as we descended in earnest for the first time… one or two riders being treated at the side of the road and at least one other looking in serious trouble laid on a tight hairpin, bike in pieces. This perhaps is what it takes for us to be a little more vigilant on the way down these monsters. Its a different thing descending in the Alps.

The highlight of the entire day was climbing the Galibier. At 8000 ft it is in every way a monster. All these roads are special, for the riders who have ridden them make them so… but I clearly remember certain TDF stages on Galibier and it's a beast I had always dreamt of climbing. It's twice the climb of Alp D’Huez and a real pig on a bad day, but what it takes from you in pain and suffering it gives back at its peak with the most awe inspiring views and utterly life affirming smugness as you crest the top. Magic! As I climbed I had a major thunder storm brewing at my back - as if this scene couldn’t get any more menacing. The last 3 - 4km are pretty much straight up. The word struggle didn’t do my effort justice.

I had given half my food to a friend who was meeting us half way down Galibier at the top of the Lauteret but there was some confusion and the van wasn’t there. It was the same for the whole group but I think I was relying too heavily on that stop: I’d eaten everything by then and already had the knock as I crested Galibier. Not great with a huge descent into the valley and Bourg then back up the 21 hairpins on the Alpe…

I latched on to a good (and big) group speeding down the valley and we all worked well, passing a very fit looking Mario Cipollini coming the other way! The few lumps before Bourg didn’t seem to bother any of us even though there wasn’t a thing left in my tank. Feeling freshish I (stupidly) decided not to eat at the last feed in Bourg so I continued on the grind up to hairpin 21. That last climb was an emotional and painful reminder of my own fight between paternal responsibilities, time spent training, health and natural athletic ability: the latter was the only thing that got me up that mountain. I don’t know what went on towards the top but the last 3km had me out of the saddle leaving all the group I’d been with and I have to admit that within the last kilometer I shed one or two tears. Whether they were of joy or pain I do not know but I’d never been to that place before. When I crossed the line I needed a good 10 minutes to sort myself out.

What a fantastic day! I WILL be there next year in better shape. Hopefully it’ll take me to that place again… wherever it is… whatever it is.