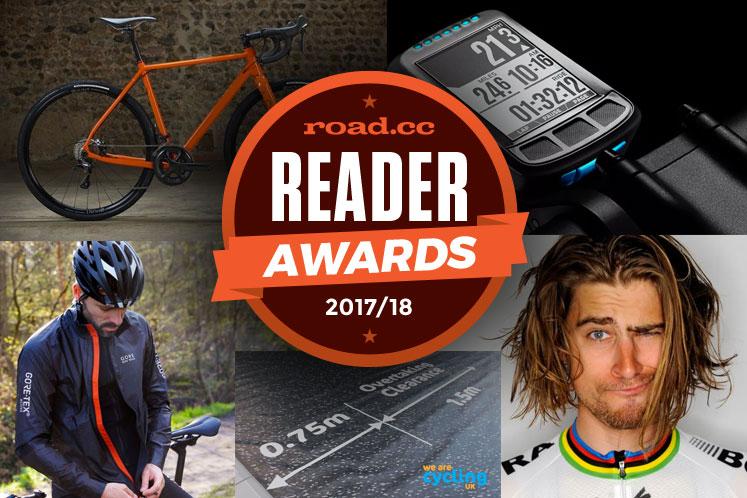 Who came out on top in our annual poll of the stuff you like best? Now is the moment of truth
by dave atkinson

So the votes have been cast and the dust has settled. And we have some winners for the road.cc Reader Awards for 2017-2018! And who won? Well, the pic above is a bit of a clue. But let's run through all the winners. Starting with... 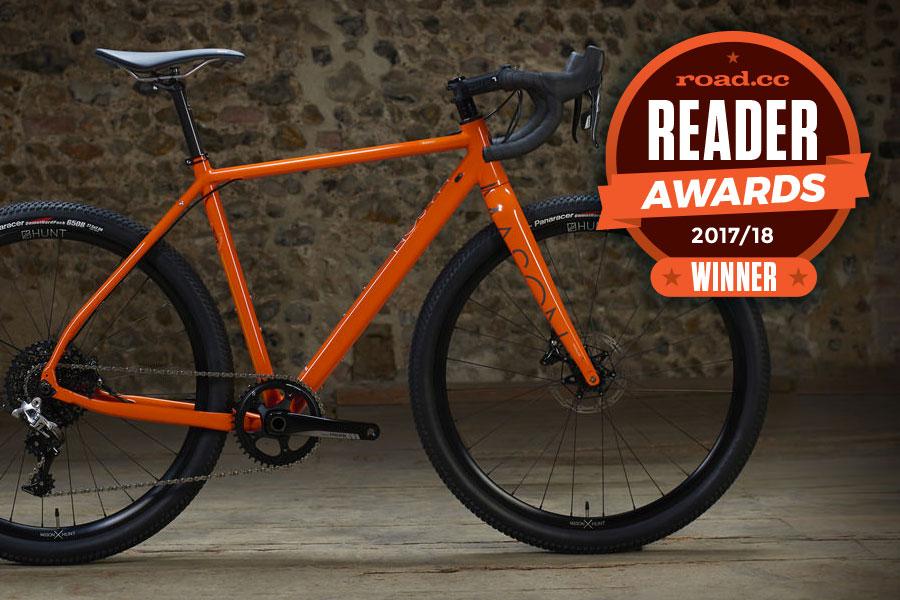 Bike of the year: Mason Bokeh

This was a fiercely contested category, but most of the fighting was between three bikes. You like your metal all purpose bikes, don't you? The Fairlight Strael got plenty of love, as did the Kinesis Tripster AT, but the winner – by a fair margin in the end – was the Mason Bokeh. 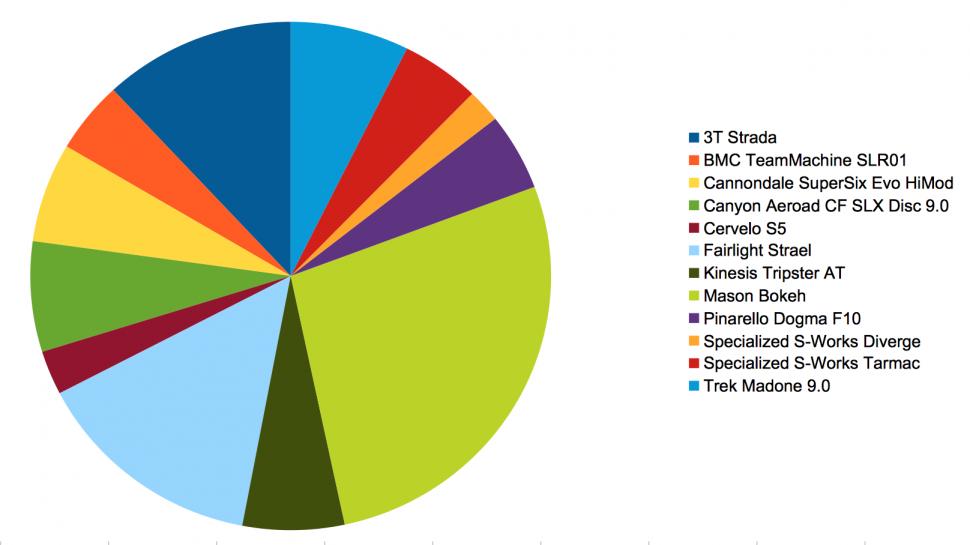 Votes for those three bikes made for the best part of half the overall, with our Bike of the Year the 3T Strada also putting in a strong showing

"The new Mason Bokeh is a highly capable adventure bike with a feature-packed aluminium frame, splendid aesthetics, and handling that ensures it's as at home on the road as it is on the trail": that was Dave Arthur's verdict when he tested the Bokeh back at the end of 2016. And it seems you lot agree. Hats off to Dom and his team for making a super UK-conditions bike that can do a bit of everything. 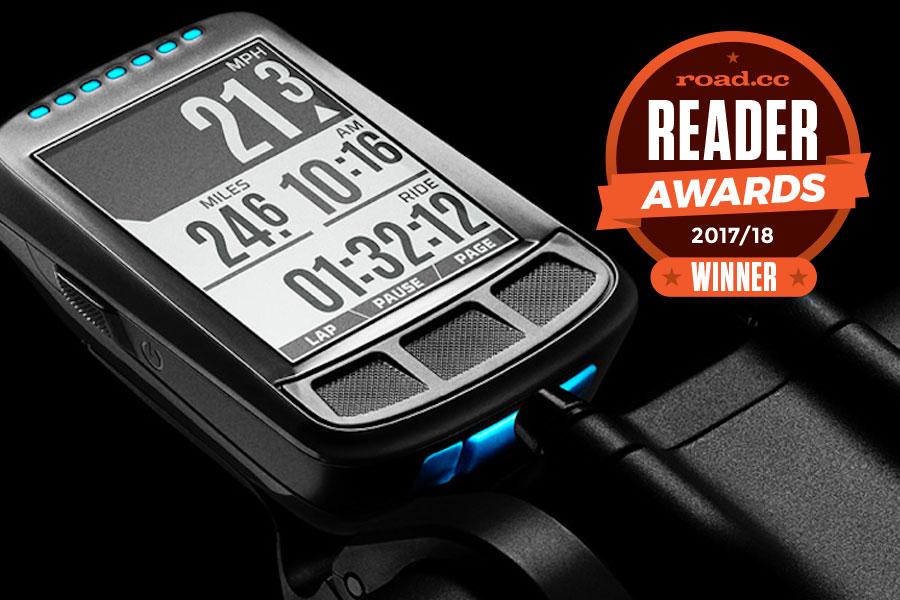 The ELEMNT BOLT is the computer that made Wahoo a real force in the GPS market. We loved it: "The Wahoo Elemnt Bolt is a compact and aero GPS bike computer that offers a vast amount of useable information, navigational capability and an excellent battery life at a reasonable price", Mat said in his review last May. 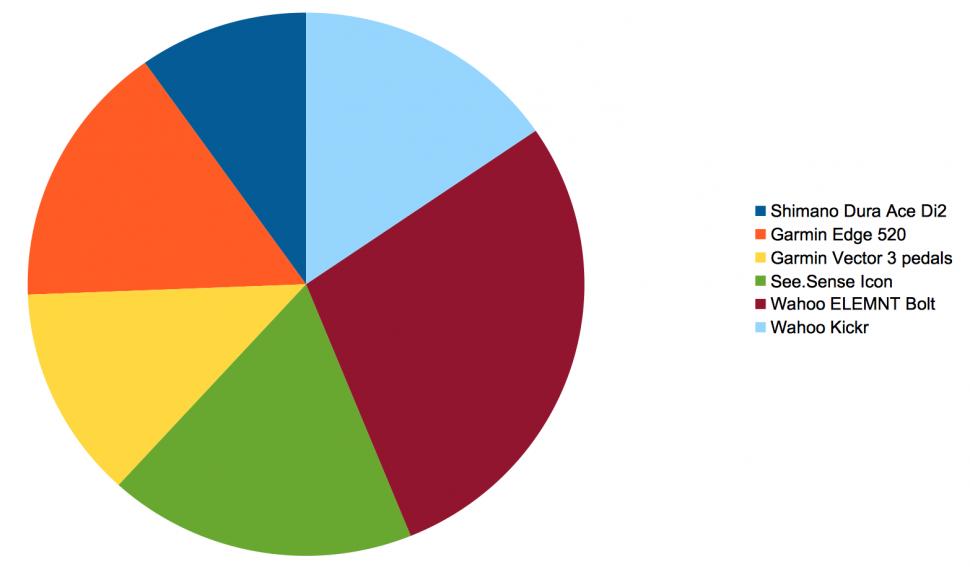 It may have been touted for its aero credentials, but the real plus points of the ELEMNT BOLT are the ease of use, the integration and the battery life. It's probably for those reasons, rather than the extra second you gained in your local evening ten, that have put this computer at the top of the list. Last year's winner, the See.Sense Icon rear light, came in second place, with the Garmin Edge 520 third. 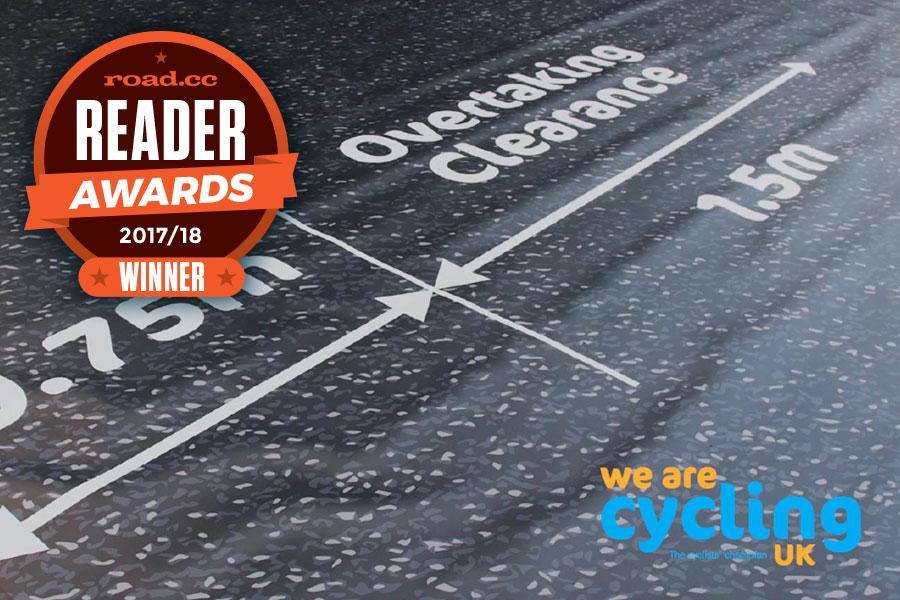 One thing we can all agree on is that whatever type of riding we do, we'd like to get to the other end of our ride without being taken out. Sadly, our Near Miss of the Day series shows that the reality is that it can be dangerous out there on the roads. Cycling UK's Kickstarter campaign successfully funded the mat, which had been developed by West Midlands Police to great effect, so that it could be rolled out to forces across the UK. 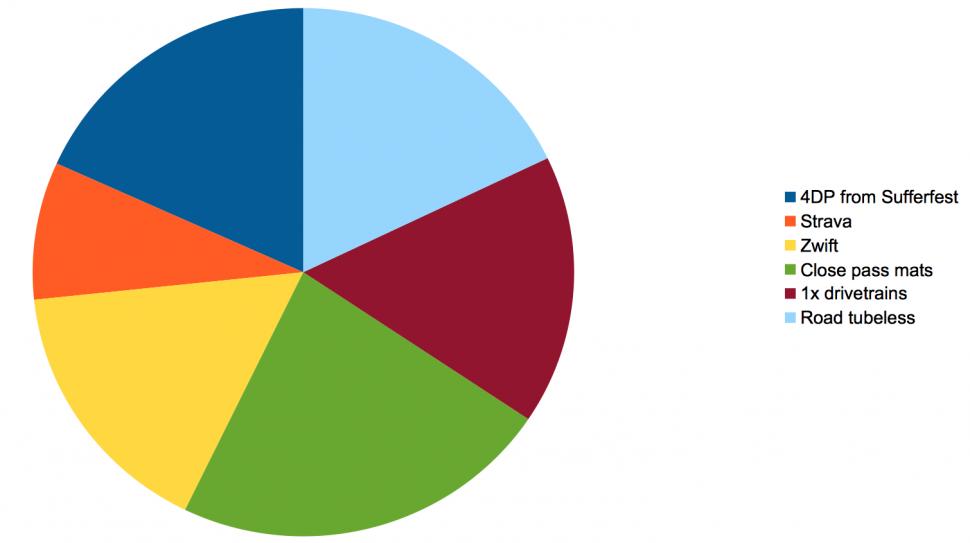 The other nominees to make the top three were more performance-oriented. 4DP (Four Dimensional Power) from The SufferFest came in second place, an updated way of looking at your power signature over and above FTP. Road tubeless finished third, just one vote behind. 1x Drivetrains, Strava and Zwift were all well represented too. 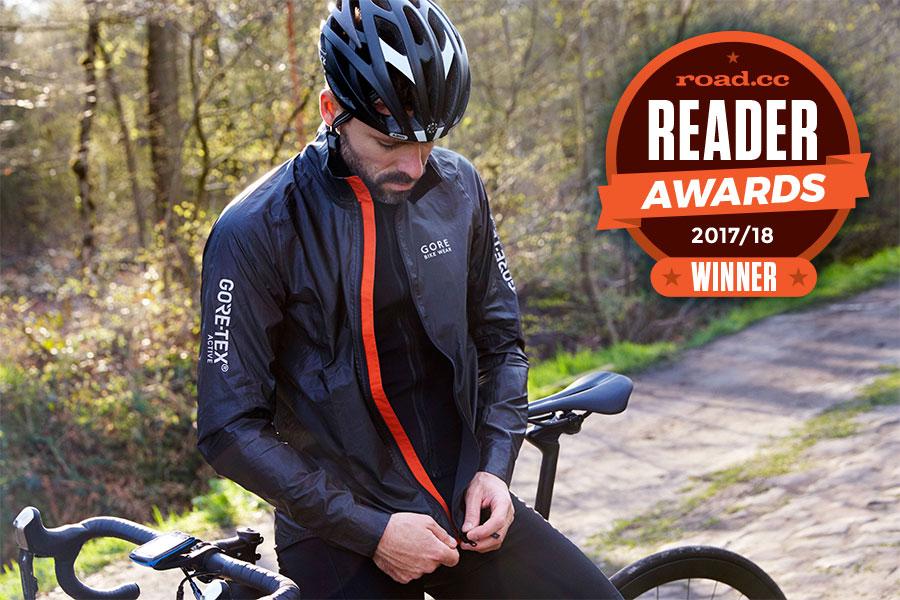 Have you had a go on a Gore Active Shakedry jacket yet? The fabric is a revelation: impossibly thin and light, completely waterproof and really breathable to boot. Dave Arthur's verdict was that the Gore One Active jacket was "far and away the best lightweight waterproof jacket I've ever tested", and so maybe it's not a surprise to learn that you're big fans too. 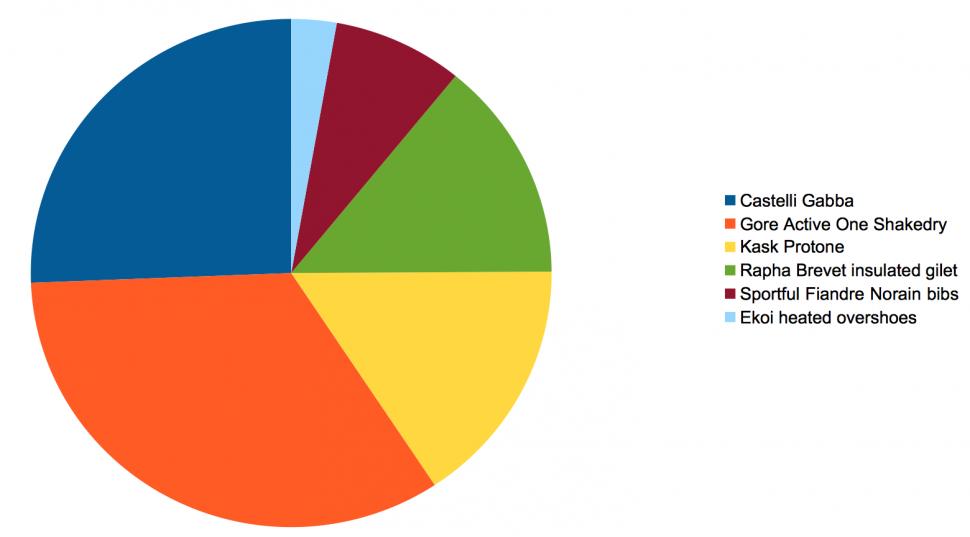 Last year's winner, the Castelli Gabba, is still up there in your affections. That came second, with the Kask Protone rolling in third. It's telling that most of the kit here is for foul weather: we do like kit that works well in the rain here in the UK, and for good reason! 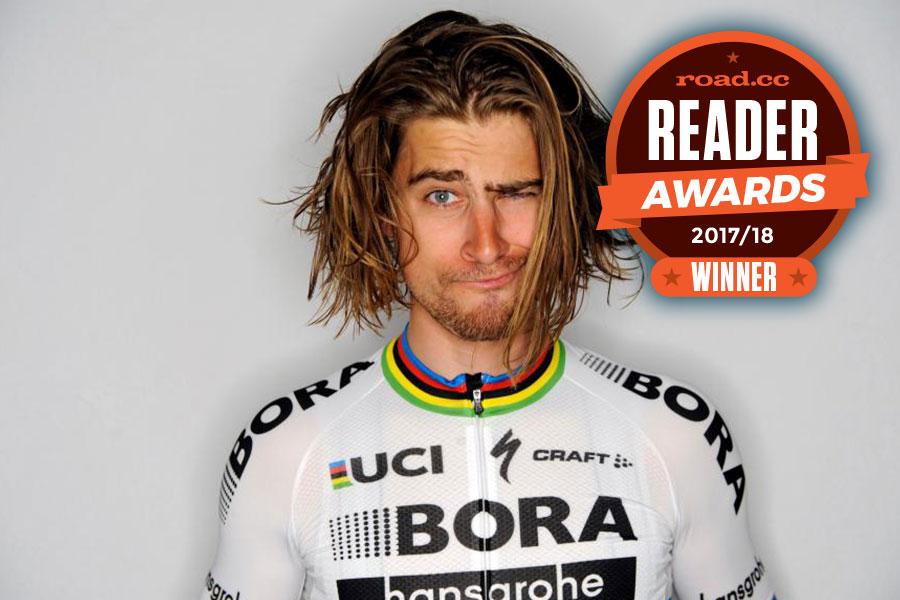 Last year Sagan had to share the top spot of the podium with Chris Boardman, but this year the three-time UCI World Champion found the extra legs to nose in front at the last, after a hard-fought race. There's a lot of love out there for the big Slovak, and also for Chris, who's become the default voice of reason for everyday cycling in the UK. 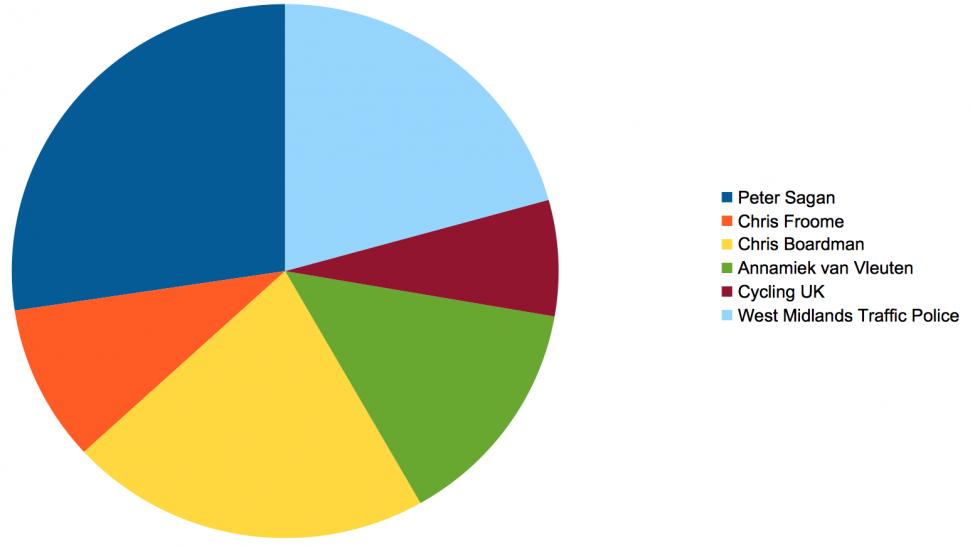 West Midlands Traffic Police, they of the Close Pass Initiative, were well-represented too in third, and rightly so.

So, that concludes the awards ceremony. The only thing remaining is to abuse the free bar and chip the glass trophy by dropping it on the way home. At least, that's what we tend to do with awards. Well done to all the nominees!