Missed the Etape this year? France a bit too far? In September you get a chance to ride a stage of another professional bike race, and you don’t have to leave the shores of Blighty to do it
by David Else

Missed the Etape this year? France a bit too far? In September you get a chance to ride a stage of another professional bike race, and you don’t have to leave the shores of Blighty to do it.

This year’s edition of the Tour of Britain sees stages dotted around the country, from Yorkshire to London, with two stages available as ‘Tour Ride’ sportives in ‘pro’ and ‘challenge’ varieties. Longest and hardest is the South-West Pro Ride - a 175km coast-to-coast epic across the surprisingly severe hills of Devon and Somerset - highly recommended if you want a serious sportive test-piece before the end of the season.

The South-West Pro Ride kicks off in Minehead, on the north Somerset coast. It’s a flat start, but after just a few miles the route heads straight into the chunky landscape of Exmoor National Park culminating in an ascent of Lype Hill. This will be a brutal beginning: from sea-level to 400m in about 16 miles. The pros will be going for King of the Mountains points here, but sportivistes with an eye on the long game may want to take it steady. The route then heads back to the coast, and through the charming little port of Watchet, before going inland for good and aiming for the second big climb of the day: the crest of the Brendon Hills. Once again, the ascent is from sea-level up to about 400m, this time in about 13 miles. We may be in Exmoor but this is definitely no stroll in the park.

And that sets the scene for the day. Although the two biggest climbs are done and dusted, the route is relentlessly hilly, rollercoasting across the Westcountry. There’s a bit of respite as the roads wind through Wivelscombe and Wellington, but then come the Blackdown Hills, a serious set of ups and downs before a welcome descent into Honiton.

Then it’s climbing again, over yet more hills before reaching the sea once more, this time on the south coast at Sidmouth. This is another charming port-town, but most riders won’t be thinking of the view. That’s because the route then tackles the harshest climb of the day, the appropriately named Peak Hill. And now even sportive-riders get to play King of the Mountains: split times will be recorded on the steepest bit: a 1km stretch of 20% gradient. Coming at about 130km into the ride, it’ll be a killer. 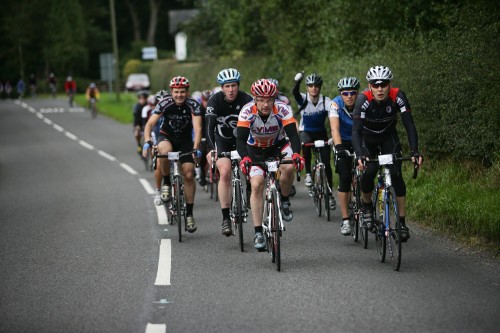 A quick descent to Otterton is followed by another stiff climb as the route heads towards Exeter, then a mercifully flat(ish) bit beside the Exe Estuary. But just when the finish is in sight there’s a steep little rise out of Dawlish. Any legs still with energy will surely be sapped by this final sting in the tail.

With that final summit in the bag, it’s then genuinely downhill into Teighnmouth and all the way the finish. Overall, this will be a tough but very rewarding ride. The total ascent of 3200m isn’t that far short of this year’s Etape figure - although of course the hills are very different in nature. Whatever time you do, you can be sure the Tour of Britain riders will do it much faster, but at least when you watch the real race on TV you can say “I went up that hill. And that one. And that one…” 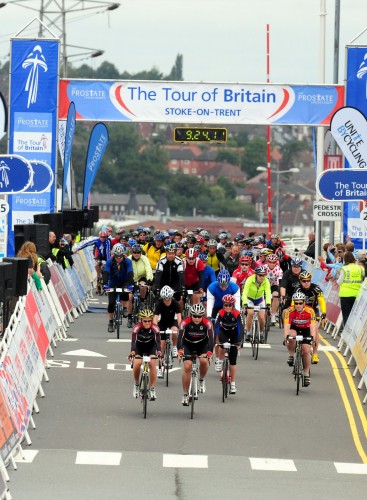 The South-West Tour Ride sportive takes place on Sunday 5 September. Over 1500 riders have already signed up, but places are still available on both the Pro Ride and Challenge Ride options. (The Challenge Ride covers the last 70km of the Pro Ride, so misses Exmoor and the Blackdowns, but still gets all the fun of Peak Hill.) There’s also a family fun option: as many laps as you like of a 1.5 km circuit around Teighnmouth, including the finish straight of the Tour itself.

If the date or route doesn’t grab you, there are also places still available on the Stoke-on-Trent Tour Ride (26 September), shadowing the race route over the tough roads of the Peak District, including legendary Gun Hill. There’s also a ride in London on the same day as the real Tour of Britain (18 September), using the same 12km circuit the pros will use, tying in with a day-long festival of cycling.

All the Tour Ride sportives and fun events are raising money and awareness for the Prostate Cancer Charity. Even if you don’t collect sponsorship, you can bask in the knowledge that all profits from the event go to this charity too. That might make the steep-looking £40 entry fee easier to bear. In addition, based on good feedback from riders doing last year’s Tour Ride in Stoke, you can expect slick organisation, several well-stocked feed stations, mobile mechanics and good signage - so you should get value for money.