F1 star Webber is big draw in Ride to Horns

This weekend Mark Webber put in a stirring performance to win the British Grand Prix at Silverstone, two weeks ago he was involved in a spectacular crash in Valencia, but last week Webber was on his bicycle for the Ride to the Horns Sportive.

Just seven days after the crash that saw him momentarily airborne, upside down and travelling backwards at 190mph before bouncing off a tyre wall at the European Grand Prix, Mark Webber looked none the worse for his ordeal as he prepared to take part in his Ride to the Horns sportive. The Australian F1 star uses cycling as part of his training regime and had ridden the long route just a few days before his mega-shunt in Valencia.

Webber's public profile has never been higher, partly due to that terrifying dice with death but in the main thanks to a performance in this year’s drivers’ championship which has seen him emerge as a genuine title contender. And belying the cliché of the cocooned superstar, he mixed and chatted with riders before the start of the event in the Buckinghamshire village of Mentmore, even sparing a few minutes to speak to Road.cc.

“It’s a good turnout and the event is growing every year,” he said. “The three rides offer a good mix of levels and the big ride is a solid day out. We’ve got good weather and it’s just great to see people out enjoying themselves instead of sitting at home watching telly!”

Perhaps not surprisingly considering the battering his body must have taken a week earlier, Webber elected to ride the shorter option, two laps of a 25 mile course. For those on the 93 mile route, things began benignly enough with golden wheat fields and lush grassland flanking riders as they rolled through rich farming country, occasionally punctuated by quintessentially English Home Counties villages full of quintessentially German executive cars. Yes, it’s a bit posh round those parts. 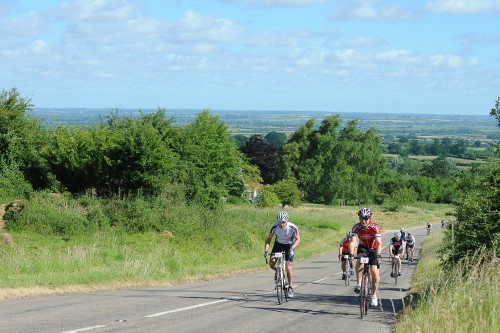 Early progress towards the town of Brill was tougher than expected thanks to a stiff westerly that at times created conditions akin to cycling through treacle. If you weren’t in a group or couldn’t catch a tow behind a passing farm tractor then it was a fairly stern opening 30 miles, despite the flattish profile. And just as the lack of climbing early on had created a sense that we were in for a relatively pain-free day, riders suddenly found themselves on an incline that put sweat in the eyes, acid in the thighs and nausea in the stomach. Whiteleaf hill is a nasty leg-burner that wouldn’t be out of place in the Lakes, Highlands or Welsh mountains.

There followed some delightful, though occasionally gravel-strewn, single track sections through sometimes wooded, sometimes hedge-flanked country lanes as the route picked its way through the Chilterns. The course was pretty lumpy for its final two thirds until the final haul up onto the chalky Dunstable Downs where, in contrast to their avian counterparts spotted earlier, a tangle of man-made kites filled the air.

There was usually something interesting to look at along the entire length of the route. If it wasn’t picturesque countryside then it was historic half-timbered villages, but
only once or twice were the views remotely spectacular. After the early headwind, somehow the corresponding tailwind never fully materialised. The morning’s westerly appeared to swing round to a southerly for the more sheltered latter stages of the event. The final 20 miles took in a lot of busy A-road riding which didn’t make for a thrilling finish to the day while the lack of a medal, certificate or other memento at the end of it all was a bit of a let down. Surely most riders wouldn’t begrudge another pound on the entry fee to get that worthless but momentarily priceless hunk of alloy.

That said, most riders road.cc spoke to seemed to have had a positive experience including the trio of Aaron Moses, Nick Oakley and Gavin Vanner from Milton Keynes.

“The choice of roads was good,” said Gavin. “I train on them and they picked the best ones from limited options. I was expecting to go up Tom’s Hill at Aldbury, but otherwise it was a good day. I was a bit disappointed not to get a medal though.”

For Aaron who is mainly a mountain biker the event had a very different feel to what he is used to. “I missed my gears!” he said. “It’s a different vibe to off-road events. I enjoyed the ride, the hills were challenging but I had some issues with the signage and got lost at one point.”

For Nick it was also a good day out. “It’s a safe ride, there’s a bit of traffic on some of the roads but you can only work with what you’ve got and I think the organisers picked all of the best hills around here.”

Londoners Simon Fearon and Rasa Kavaliauskaite had heard about the event from a work colleague and were taking part in their first sportive.

“I haven’t seen hills like that before!” said Lithuanian Rasa who had previously encountered nothing more serious than Box Hill in Surrey. “There were some busy main roads but it was still a good to get away from London and ride somewhere different.”

For Simon too, the lumpiness of the course was a bit of a shock. “I expected it to be tiring but didn’t expect so many hills,” he said. “You get bored riding the same roads so this is a cool way to see the country.”

Mike Bannister of Houghton Regis thought the ride was well put together. “The riding was varied with some nice country roads an a few sneaky climbs, the food and drink was well done and it was well signed,” he said. “The tie-in with the village fete was a good idea and it was very sociable but having done it once I’m not sure I would do it again, there are plenty of others I’d like to do, just for the variety.”

Organiser Graham Temple of Wheels in Wheels said that in future the long route may need some adjustments to avoid the long A-road drag back to the finish on the village green in Mentmore. “We’re well established now so we can tweak the course and perhaps take out the Dunstable Downs section,” he said. “Like most sportives, it’s a work in progress but we are happy with the turnout of just under the 400 rider capacity, the tie-in with the village fete works well and the good weather helps!”

But for many a big attraction is the presence of one of motor racing’s hottest properties and Graham concedes that Webber’s presence is undoubtedly a major draw for this small, friendly sportive.

So, for the time being it seems that the opportunity for the two-wheeled proletariat to rub shoulders with a four-wheel superstar will be enough to guarantee the Ride to the Horns its modest place on the sportive calendar. For our money, as a local event it works well enough, but unless meeting a Formula 1 driver is a major priority, it would be hard for us to recommend making a long trip to get to next year’s edition. Having said that, if the Red Bull driver wins this year’s F1 championship, even the locals would be well advised to get their entries in early for the 2011 edition.