Back to Features
feature
Culture
How to
Tech 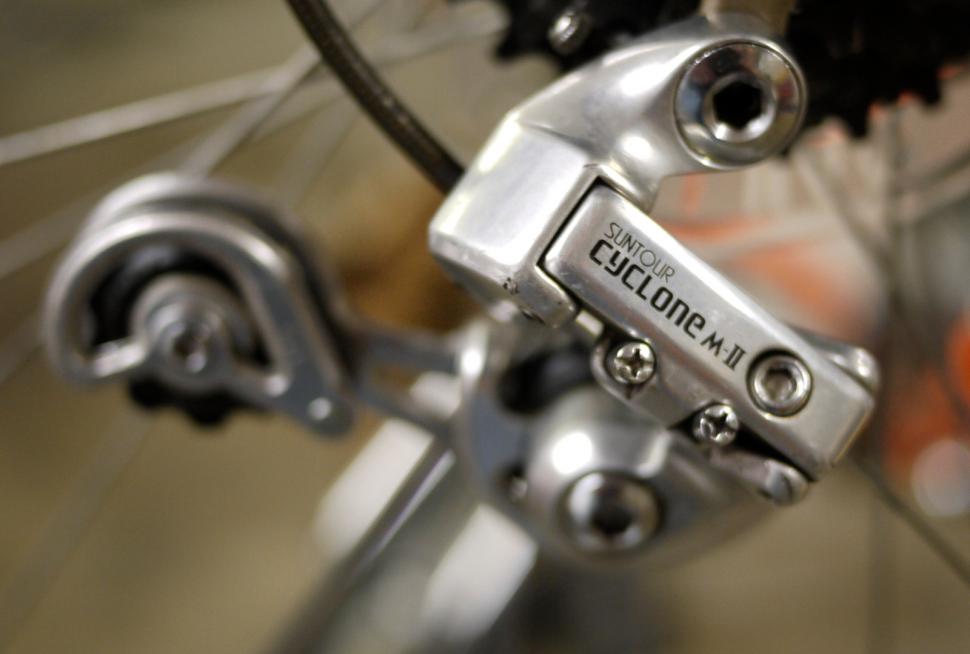 Retro: Four cycling brands that are no more

Whatever happened to Avocet, Chater-Lea, SunTour and Zeus?
by John Stevenson

Cycling technology has been shaped by hundreds of companies large and small that have added to the vast range of options we have today. Some of them still thrive, but many others no longer exist after being unable to respond to changing markets. Here are four from around the world: cycle computer pioneer Avocet; legendary British component maker Chater-Lea; SunTour, once the world’s largest derailleur manufacturer; and quirky Spanish bike and component maker Zeus. 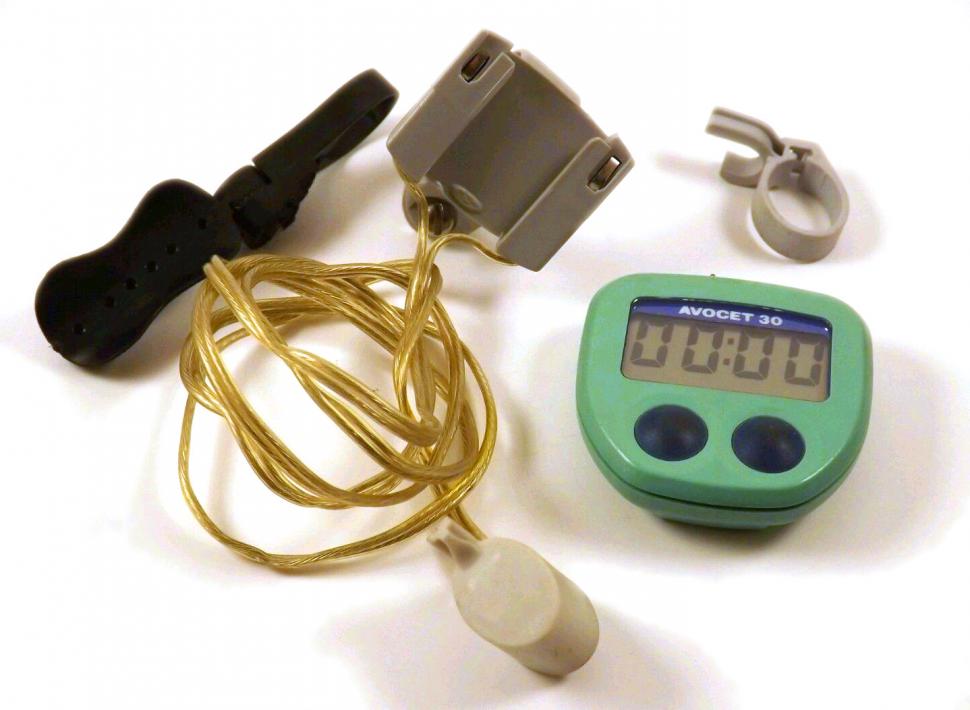 Avocet 30 computer, as found on eBay

Founded in the 1970s by Bernie Hoffacker and his sons Bud and Neal, Avocet is best remembered for its once-ubiquitous computers. For a while in the 1980s and ’90s Avocet was on the front of almost every bike in the peloton. Based out of Palo Alto Bicycles in California, USA, Avocet had taken advantage of its location in Silicon Valley to tap into the area’s booming electronics industry and come up with an accurate, reliable and – most importantly – tiny digital speedo.

As well as computers, Avocet made tyres, saddles and a wrist-mounted electronic altimeter, a feature that was eventually incorporated into one of its computers. Avocet’s tyres were among the first smooth-tread, low-rolling resistance clinchers, incorporating features like high-thread-count casings and rubber compounds specifically-formulated for bike tyres.

There’s still an Avocet website, listing the company’s computers and tyres, but the content hasn’t changed in over a decade. Avocet was unable to compete on price with Taiwanese and Japanese electronics manufacturers and its attempts to outsource manufacturing amounted to rebadging poor Taiwanese copies of its own computers.

Avocet announced a new range of tyres in 2002, dubbed Carbon 12 to indicate the use of carbon black in the tread for grip and longevity. By then, other tyre makers had improved their products to close the gap, and the marketing departments of big players like Michelin and Continental put tyres on Tour de France team bikes, a luxury smaller tyre makers couldn’t afford.

William Chater-Lea founded the perhaps the best British cycle component manufacturer in 1890. It was initially based in a nine-storey factory in Banner Street in the City of London and from 1928 in Letchworth, Hertfordshire. As well as bike parts, Chater-Lea made cars from 1907 to 1922 and motorcycles from 1903 to 1935. William Chater-Lea died in 1927 and his sons John and Bernard took the helm. Wikipedia cites a Companies House listing showing the company was still trading until 1987, but it ceased making cycling components long before that.

In the era when cranks were still attached to bottom brackets by cotter pins, Chater-Lea made gorgeously-polished steel cranks and, later, highly distinctive large-flange hubs with large round lightening holes in the flanges.

As well as components for solo bikes and tandems (at the time very popular as family transport), Chater-Lea made frame parts and complete bikes, so you had the choice of buying a Chater-Lea made by the company or a bike from another builder using Chater-Lea parts.

Chater-Lea’s heyday was very much between the world wars. It seems to have made a smaller range of parts after World War II, and it continued making its pre-war designs while the market was moving to lighter, European-style parts, derailleur gears and quick-release hubs.

Chater-Lea’s subsequent decline was symptomatic of the British cycle industry from the 1950s onward. Raleigh’s domination of the utility bike market drove down prices from suppliers as the rise of the motor car went hand in hand with the declining popularity of cycling. Sport cyclists wanted bikes and components like those used in European road racing. With no demand for good quality recreational cycling components, firms like Chater-Lea were caught in a pincer movement that also forced out companies such as Constrictor, Bayliss-Wiley, BHC and many others.

The reborn Chater-Lea describe themselves as "Manufacturers of legendary components for modern and vintage bicycles, handcrafted since 1890" but there's nary a clue about who's behind the resurrection, or what Chater-Lea v2.0 will be making. The original plan was that there would be an announcement toward the end of 2017, but we understand that things are running a little behind schedule. 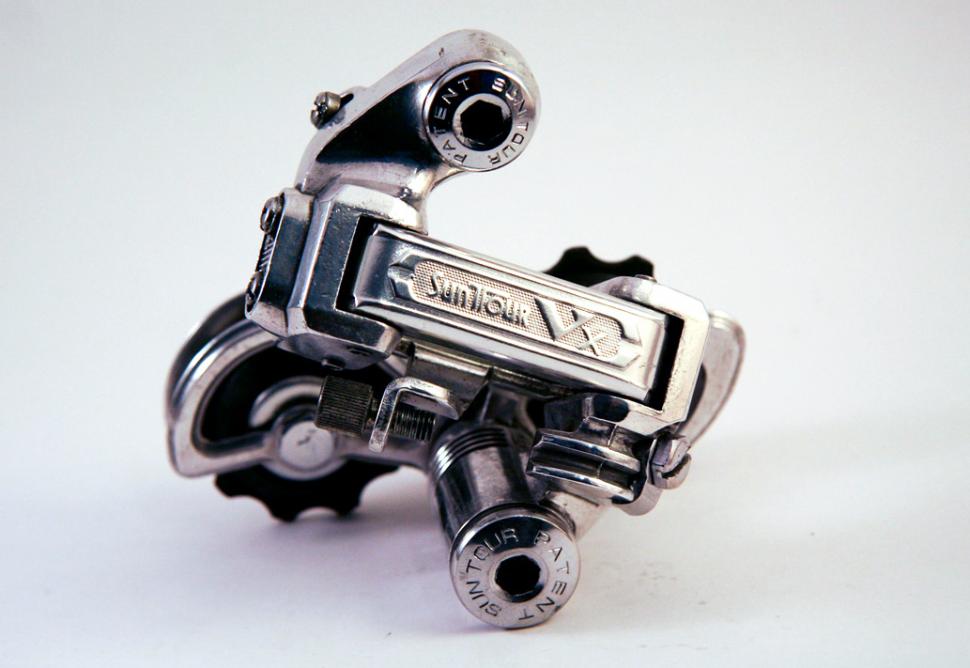 Like Shimano, SunTour got its start making freewheels in 1912, as Maeda Iron Works Company, owned by the Maeda and Kawai families and headquartered near Tokyo, Japan.

For 20-odd years from 1964 SunTour made the best-shifting rear derailleurs. SunTour’s design, the slant-parallelogram, kept the top jockey wheel much closer to the sprockets than the derailleurs of Campagnolo, Shimano or the many other derailleur makers of the 60s and 70s. The smaller the jockey-sprocket gap, the shorter and less flexible the chain run between them and the better the shifting.

In 1968, Junzo Kawai, a member of one of the two families that owned Maeda, decided to start exporting derailleurs. It was a well-timed move. SunTour rode to success on the American 10-speed boom of the 1970s and the early years of the mountain bike boom, rolling out new variants on its derailleur design annually. In 1980 SunTour sold 3,800,000 rear derailleurs.

The weak Yen of the era made Japanese bikes, equipped with Japanese components, a bargain in the US compared to European bikes and components, and SunTour was quick to react to the emergence of the mountain bike, cementing its position. However, SunTour’s derailleurs were all variants on a theme: a lighter mechanism for racing, a sturdier one for mountain biking and so on. As the clock ticked on the expiration of SunTour’s patent, Shimano was cooking up a refinement of the design that was even more precise. Shimano combined it with a gear lever that clicked between gear positions to yield ‘indexed’ gearing. In 1985, Shimano introduced indexing on its pro-quality Dura-Ace group.

SunTour was slow to respond, and tried to make its indexing system work with its existing, unevenly-spaced freewheels, where Shimano had started with a clean sheet and designed gear lever, derailleur, chain and sprockets to work together. It too several years for SunTour to catch up, by which time it was too late.

During its years of derailleur domination, SunTour also made what would turn out to be a disastrous business decision. While its rivals were charging what the market would bear, SunTour simply added a mark up to its manufacturing costs. Shimano used its profits to expand, making its own brakes and chainsets as well as gears and pumping resources into a 200-strong product development department. SunTour didn’t, and in order to offer groupsets to bike makers it had to partner with other manufacturers. It only had 20 people working on product development and, fatally, it didn’t have the resources to withstand an increase in the value of the Yen in 1985.

It took SunTour until 1990 to catch up with Shimano in functionality, by which time it was too late. Shimano dominated the market.

In the meantime, SunTour underwent a change of ownership, coming under the umbrella of Mori Industries, which had recently bought chainset maker Sakae Ringyo. Mori moved the production of most SR-SunTour components to Taiwan.

SunTour came up with some good ideas over the next few years, notably MicroDrive chainsets for mountain bikes that used smaller chainrings to provide lower gears and increased ground clearance, but it was a dead cat bounce.

In 1995 Mori sold SR-SunTour to the original owners of Sakae Ringyo in a management buyout. SunTour’s Japanese factories closed and company president Junzo Kawai, who had been instrumental in his family’s business since joining it as a 25-year-old in 1946, was out of a job.

The name survives in Taiwan-based SR-SunTour, which specialises in suspension forks, chainrings and e-bike motors. 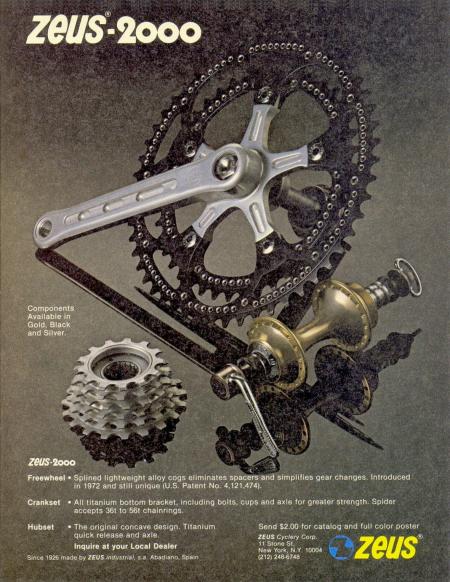 Founded in the Basque region of Spain by Luis Arregui in 1926, Zeus is believed to have been unique in the post-war era in that it made both complete high-end bikes, and component groupsets, most of which were more or less copies of Campagnolo’s equivalents.

Being both bike and component manufacturer is unusual enough, but Zeus has other claims to fame. In its 1973 catalog it claimed to have invented the parallelogram rear derailleur as early as 1932. This claim is treated with some scepticism by experts, as it precedes Campagnolo’s introduction of the design by 20 years and nobody seems to be able to find either a physical example or contemporary accounts of it. One account says a prototype surfaced at a Brussels bike show in 1971, only to vanish again.

Zeus made one of the loveliest component groups of the era before Shimano came to dominate. Instead of slavishly copying Campagnolo, the Zeus 2000 group was, in the words of Michael Sweatman at Disreaeli Gears, “a genuine attempt to make the very best components in the world”. There was nothing mechanically innovative about the 2000 group, but it was beautifully finished, included a startlingly light freewheel with aluminium sprockets and lots of titanium, and was enthusiastically drilled out to save weight. 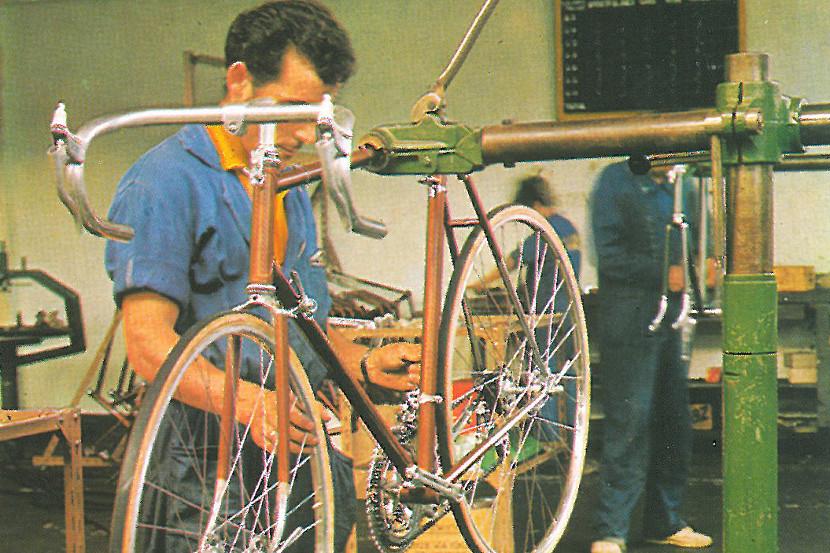 Assembling a Zeus complete bike in the factory (courtesy Orbea)

Zeus is also famous for driving mechanics mad by using crank bolts with 16mm heads instead of the more common 14mm or 15mm. Cranks of the era – including Zeus’ – almost all had a 22mm extractor thread, but no standard 16mm socket will fit in a 22mm hole. Zeus made a spanner to fit, but they were as rare as a calm and reasonable EU referendum argument. Mechanics usually resorted to grinding down a socket to fit, and binning the bolts once they were out.

The Zeus brand is now owned by Orbea, which bought the company when it got into financial difficulties, and found jobs for some of its staff. The name survived on bikes for a while – there were even Zeus mountain bikes – and Orbea used it for components as recently as 2009.

Sunset for SunTour by Frank Berto