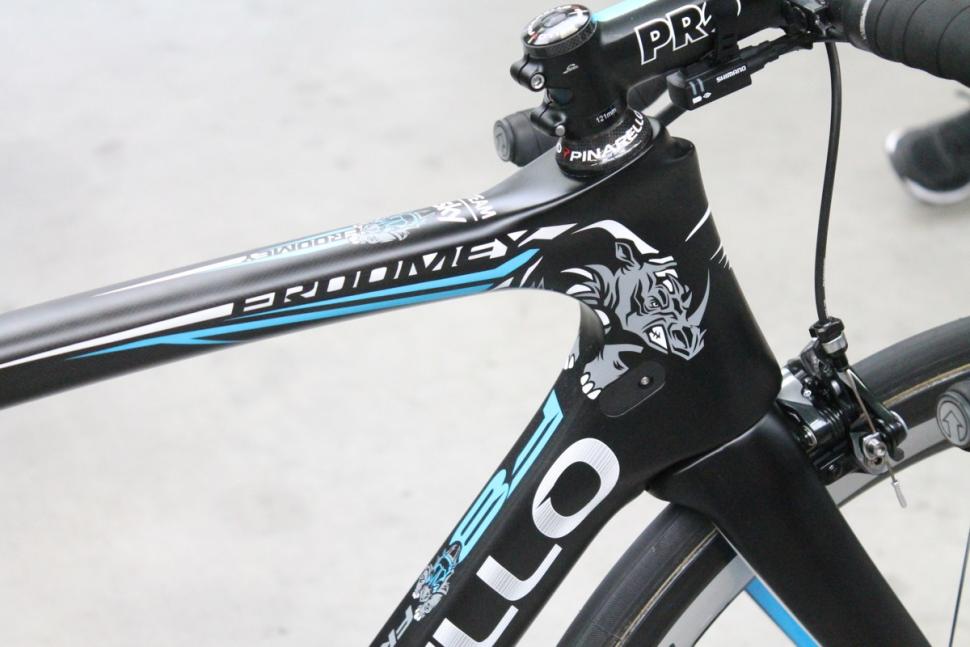 We visited Team Sky’s Service Course – the logistics HQ where all the equipment is stored and distributed – in Belgium last week, courtesy of Shimano, and got an insight into how some of its famous marginal gains are achieved.

In case you’ve been living in a cave for the past few years and it has passed you buy, Team Sky, led by Dave Brailsford, has built its success on the aggregation of marginal gains. Essentially, the idea is that if you can improve lots of things by a small amount, the net result can make the difference between winning and losing.

Make sense? So Team Sky examines all aspects of training, physiology, recovery, nutrition, equipment, psychology, racing strategy, and everything else that has an influence on results, and tries to improve every little thing. Each improvement might be very small, but it’s all about the cumulative effect.

It’s not a new philosophy but Team Sky has turned it into an art form and, as we all know, it has had three overall wins in the last four Tours de France. The proof of the pudding and all that.

We got shown around Team Sky’s Service Course by Carsten Jeppesen, Team Sky’s Head of Technical Operations and Commercial. It’s his job to ensure the team riders have the best possible tools with which to do their job: the bikes, the equipment, the bus and even their beds.

Here are 12 ways we spotted by which Team Sky looks to gain an advantage over the opposition.

We’re all used to claims that brands have developed certain products with the pro teams they sponsor, and we usually treat those claims with scepticism, assuming they’re PR without much foundation in fact. 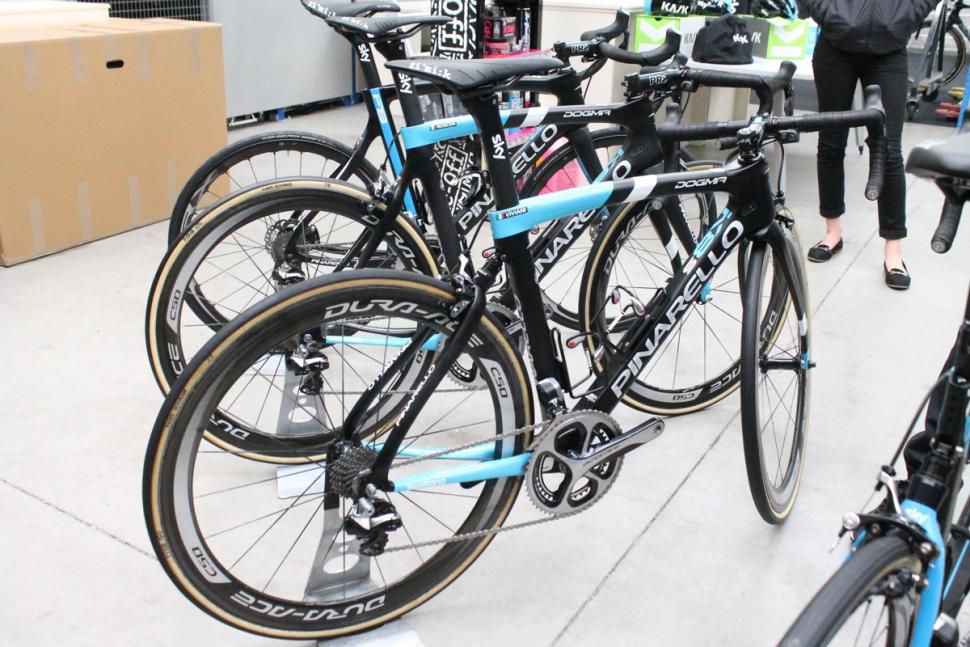 Team Sky, though, isn’t the sort of outfit that would ride just anything that’s supplied. Rather, Sky is so focused on getting the best tool for the job that we believe Pinarello when it says the Dogma K8-S, for example, was a response to a specific request from the team. This is a bike that’s designed especially for dealing with the Paris-Roubaix cobbles, hence a small amount of rear travel via the DSS 1.0 suspension system.

Check out our First Ride on the Pinarello Dogma K8-S here. 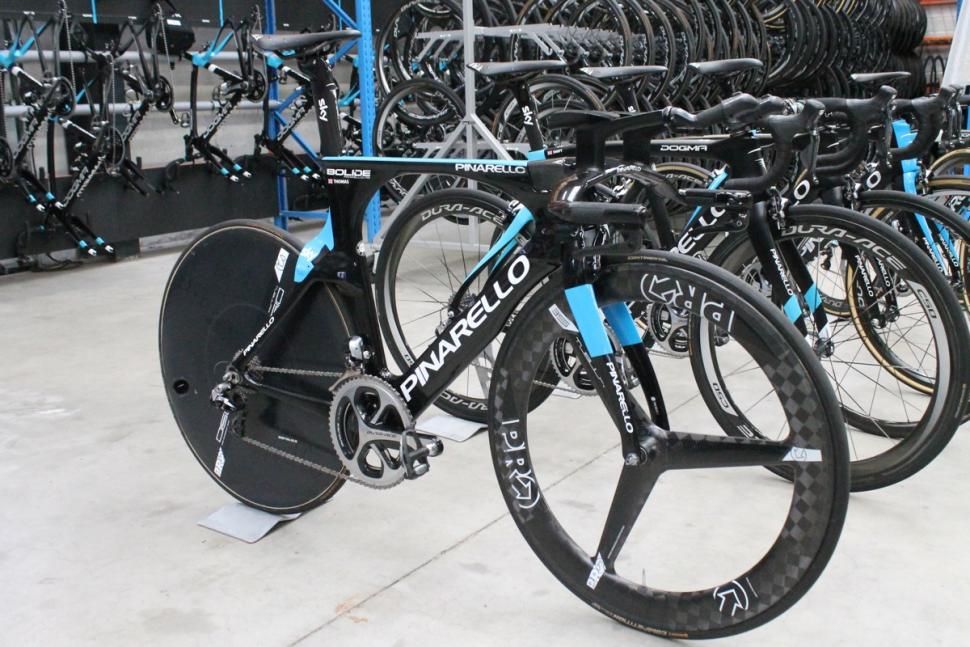 Team Sky also had a big contribution to the design of the Dogma F8 road bike and the Bolide time trial bike.

It’s well known that Team Sky takes its own mattresses and pillows to major races to help make sure that riders get a good night’s sleep. With rest and recovery so important, particularly in a long stage race, why take the risk of a key rider starting a big day after not sleeping well? 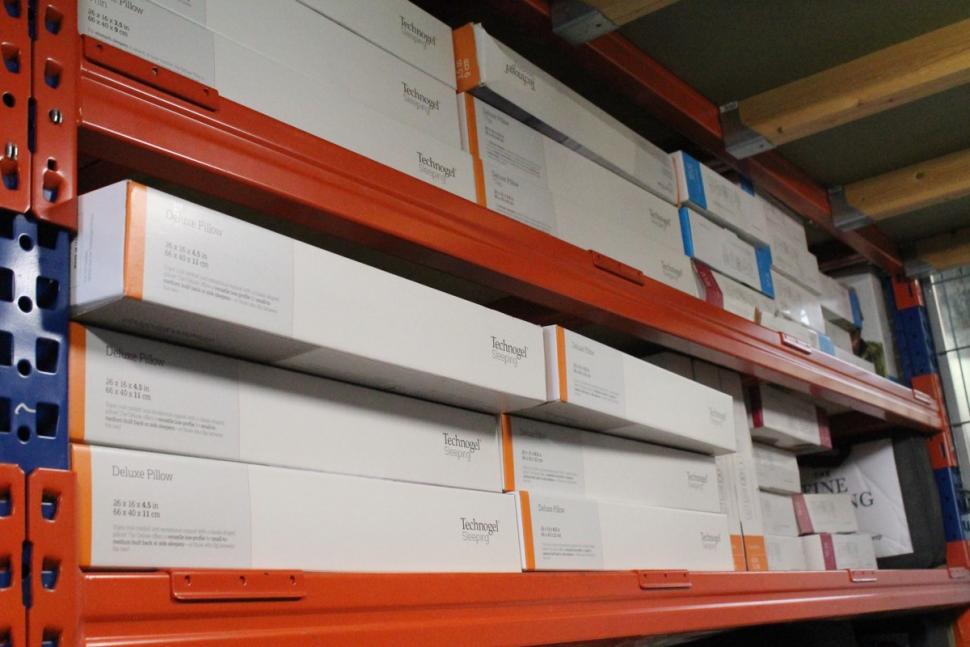 Logistically, shifting bulky items like this around isn’t easy, but Team Sky considers it an effort worth making.

While the race is going on, carers go and prepare the riders’ rooms for the night.

“The differences between the hotel rooms that we use are extreme,” says Carsten. “If we come to a hotel room that’s not in a good state in the Tour, for example, our staff give the place a proper clean. You’d be surprised at how dirty a hotel room can be. Quite often they move the bed and clean everywhere.

“In a Grand Tour a rider’s breathing system is really challenged and just small amount of dust in a dirty room can make them sleep quite badly.”

3. Sorting out equipment well in advance

Team Sky uses FMB Paris-Roubaix 27mm tyres for Paris-Roubaix. These are extremely popular among the pro teams for the cobbles. Rather than risk not having them delivered in time, Team Sky buys its tyres a year in advance and stores them at its Service Course until they’re needed. 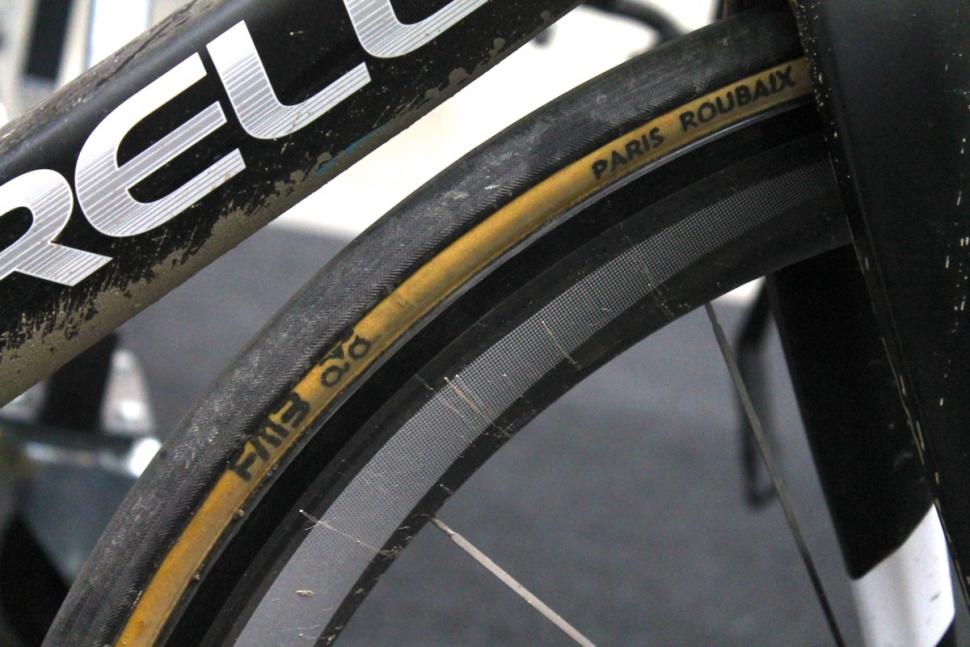 We also spotted boxes of Shimano C50 wheels squirrelled away for the Tour de France later in the year. Get them early and there’s more time to sort out any issues. 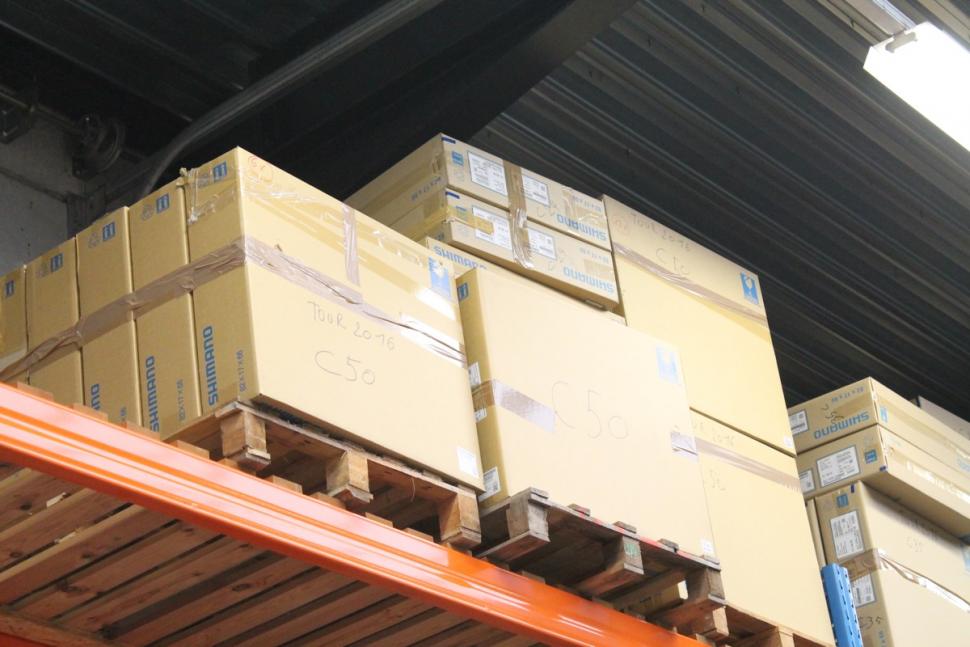 4. Travelling on the Death Star 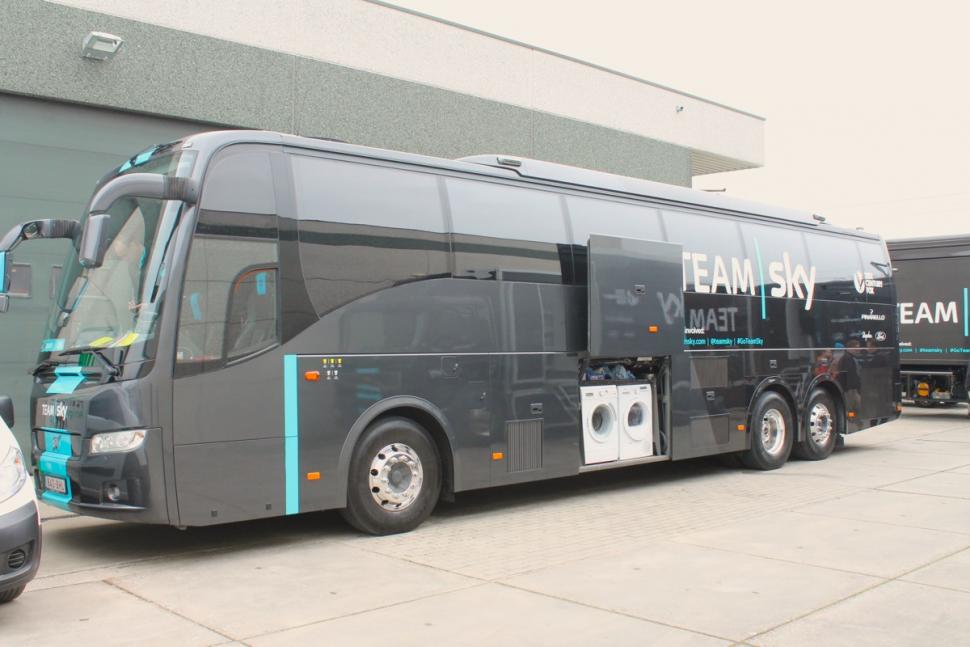 Chances are that you’ve seen or heard about Team Sky’s bus, nicknamed the Death Star, before because it’s quite famous, as buses go. Forget about your old school bus, this one has individual reclining, deeply padded seats for the riders.

There are showers in the middle, a toilet, a treatment/meeting room at the back, a very good sound system… It’s all about keeping the riders comfortable. Sadly, someone has graffitied one of the wall panels. 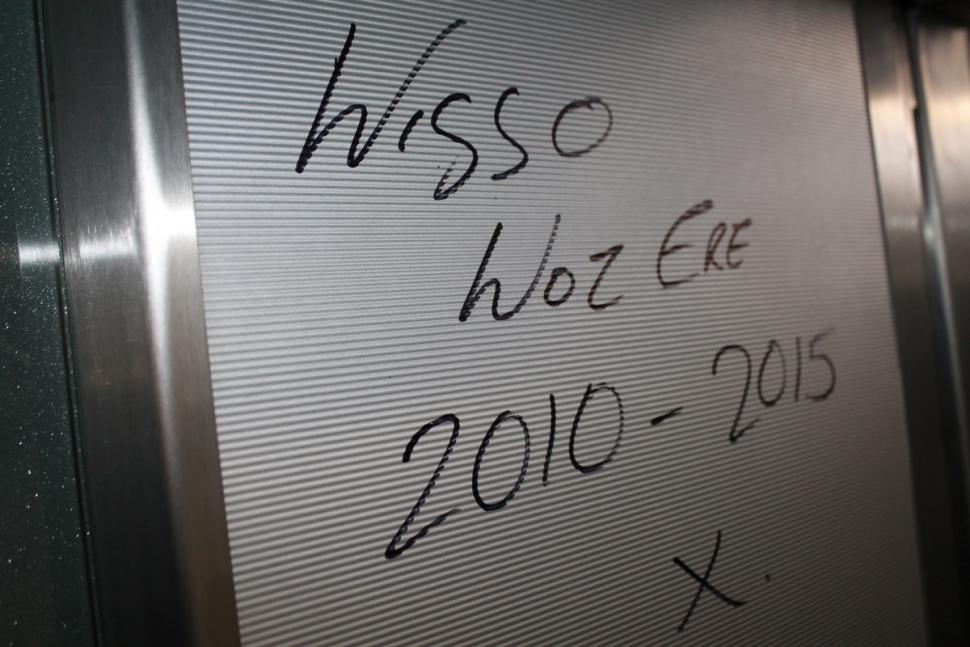 The bus looks cool and imposing, and that’s all part of the deal. Team Sky wants to convey a strong image. 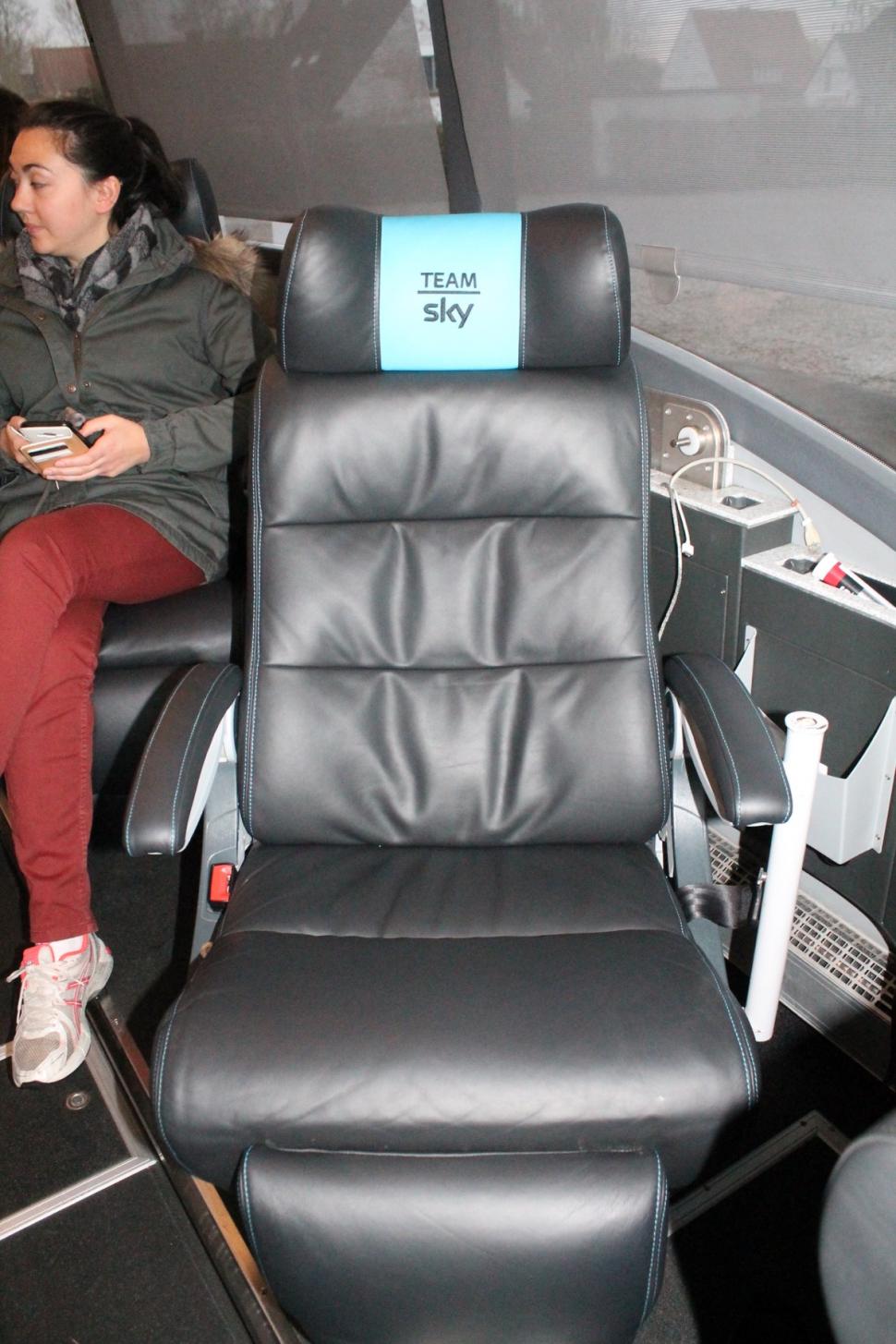 Even the bus driver we spoke to, Chris Slark, was interviewed by Dave Brailsford. He has a background in Formula 1 and Team Sky wanted to bring over some of the standards from that sport in terms of cleanliness and appearance. Brailsford also wanted someone with a reputation for being a character.

Check out this video from inside the bus. 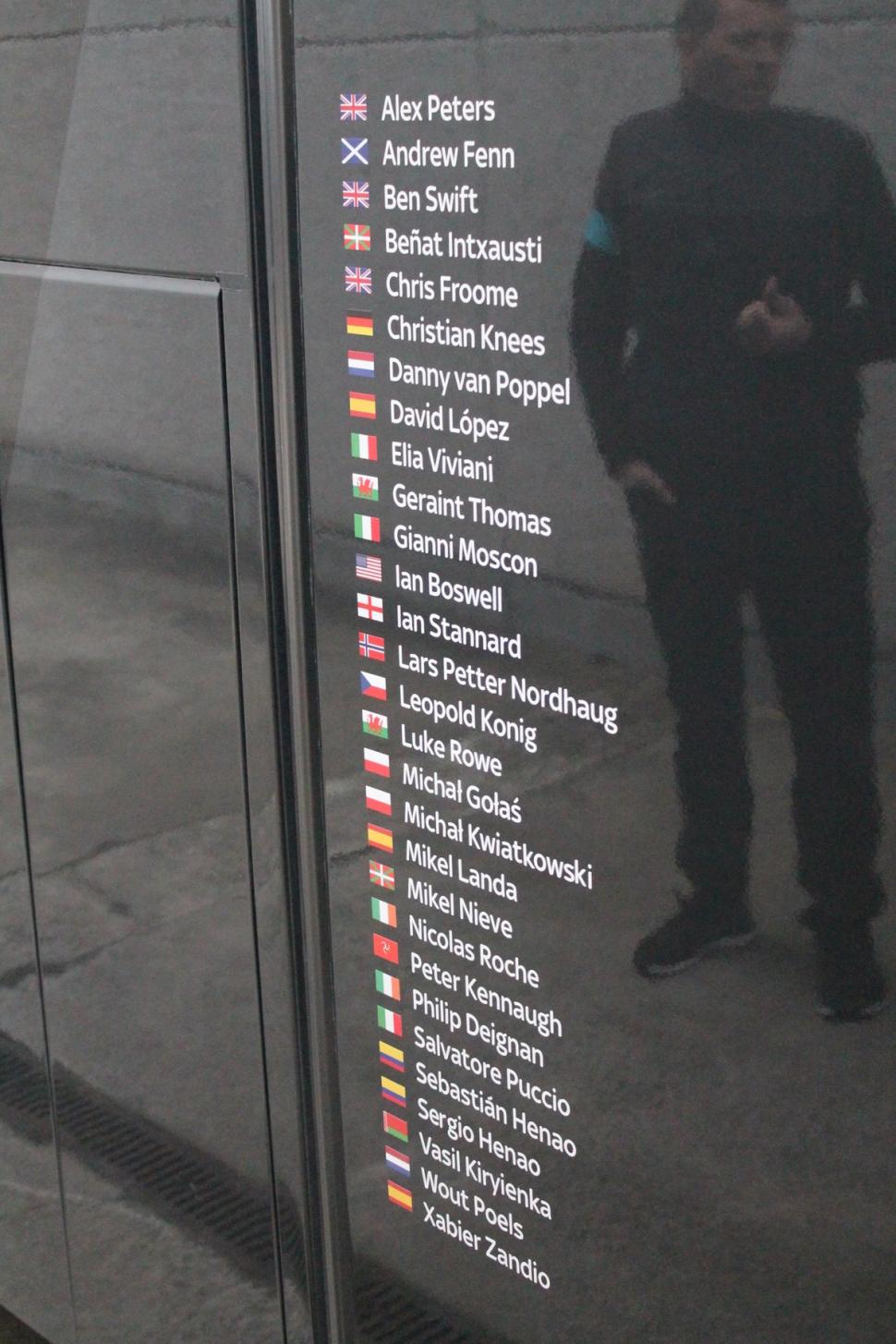 The riders get to choose the flag alongside their name on the side of the bus, by the way. That’s why Ian Stannard has the flag of England and Geraint Thomas and Luke Rowe have the flag of Wales while Alex Peters, Ben Swift and Chris Froome all have the Union Jack.

The sides of Team Sky’s mechanics’ truck extend out to create a spacious workshop. 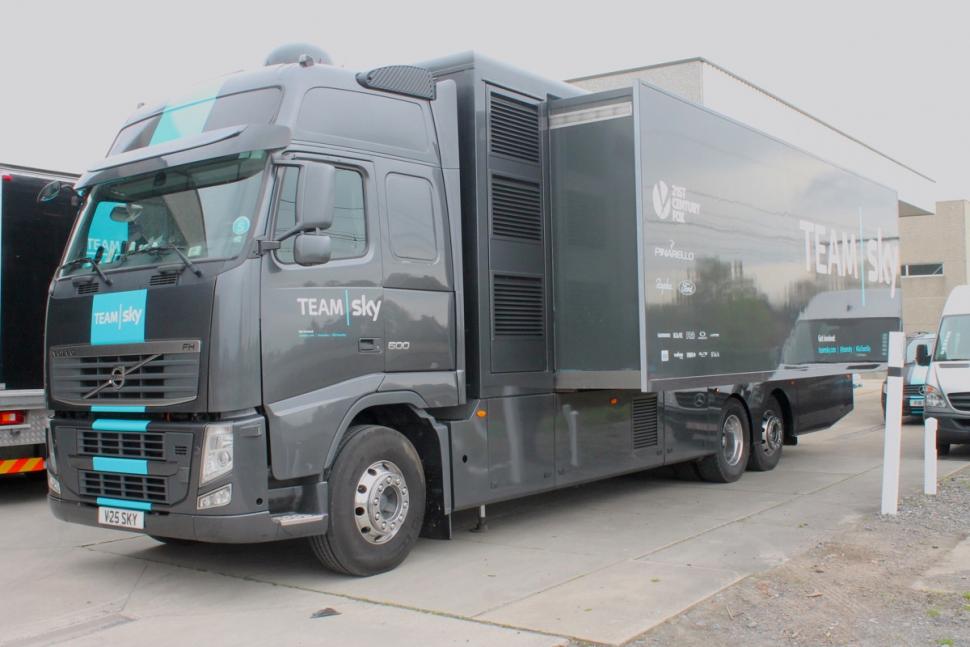 Early season races can be cold while races like the Vuelta can sometimes be unbearably hot so Team Sky provides its mechanics with a climate controlled environment to make life more comfortable.

Like the bus (above), the idea is to keep everyone on the team feeling good.

See those two blue lines on this Fizik saddle? They’re a little camouflaged by the grip area but one is 4cm and the other is 15cm from the tip of the saddle. Mechanics add those lines to the saddles of each of the 250 bikes ridden by Team Sky in a year. 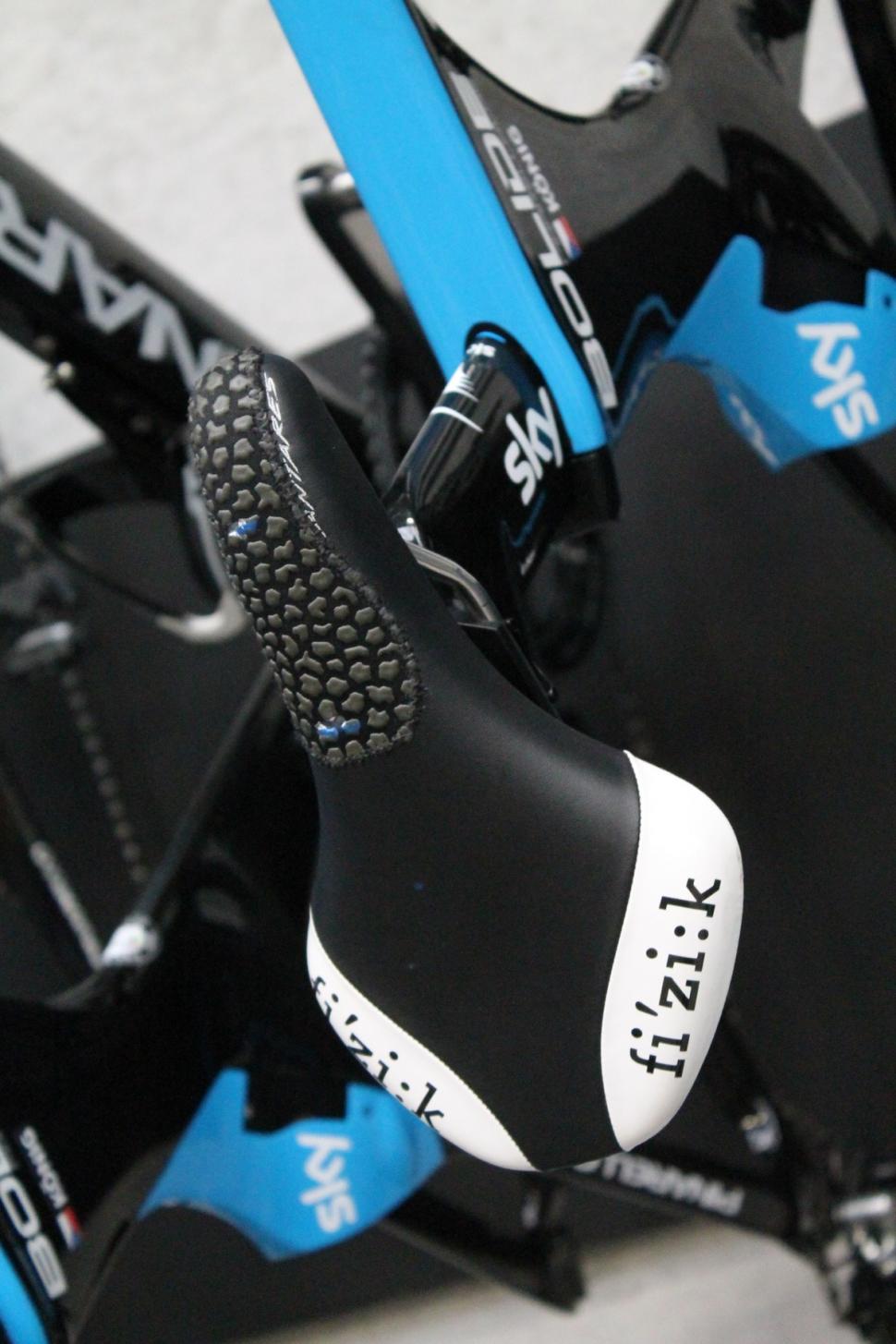 “There are so many different ways of measuring a bike,” says Carsten Jeppesen. “We have nine full-time mechanics and if they measured nine different ways it would be too risky for us, so we have made a way of doing things based on those two specific points. It is a way of making sure that all of a rider’s bikes are set up the same.” 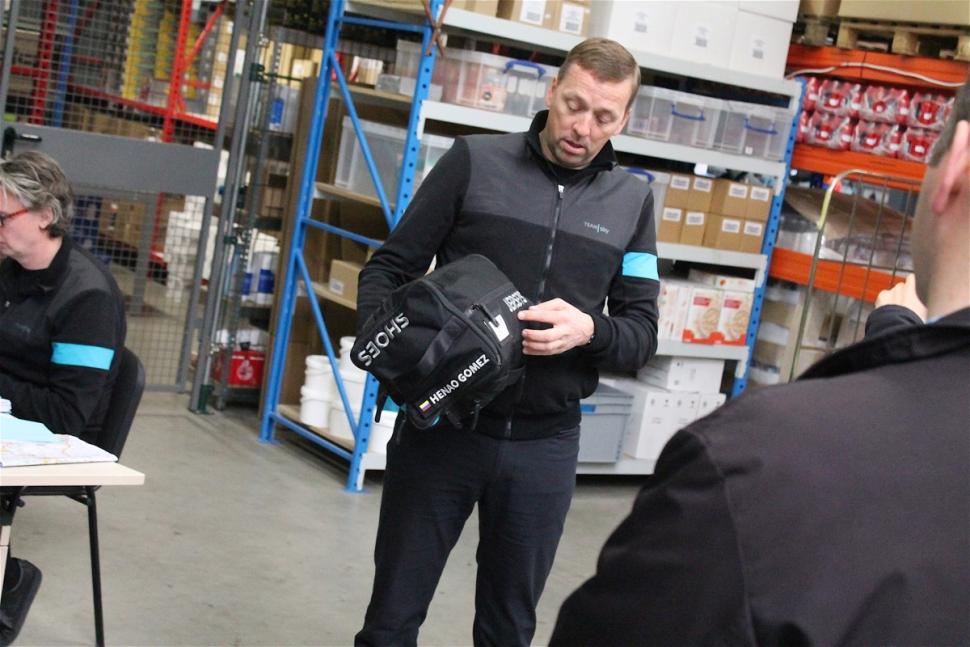 All Team Sky riders have a wet weather bag that’s stored in a team car during racing. If it starts raining, it’s easy for the staff to find and hand up the required kit. It’s made even simpler by the fact that each item is stored in its own labelled pocket

Team Sky uses up to 35,000 drinks bottles a year. They’re used once each and then given away.

It won’t surprise you to learn that Team Sky has a hydration strategy that riders follow, along with a recovery strategy, and loads of other strategies.

“We don’t have a protocol for everything, but we try each year to add a few things,” says Carsten.

“It’s easy to put down on paper that you are going to do something, but to execute it is a different thing. That’s something that we’re good at: making a protocol and then making it happen.”

9. Cooling down on a trainer

Team Sky has brought in staff from outside cycling, some of whom were surprised that riders would sprint to a race finish after several hours in the saddle and then not no cool down.

“We were the first team that started to warm down after the stage,” says Carsten. “If you look at swimmers, after a final they’ll do a short interview and then will jump into the training pool and do a few laps. 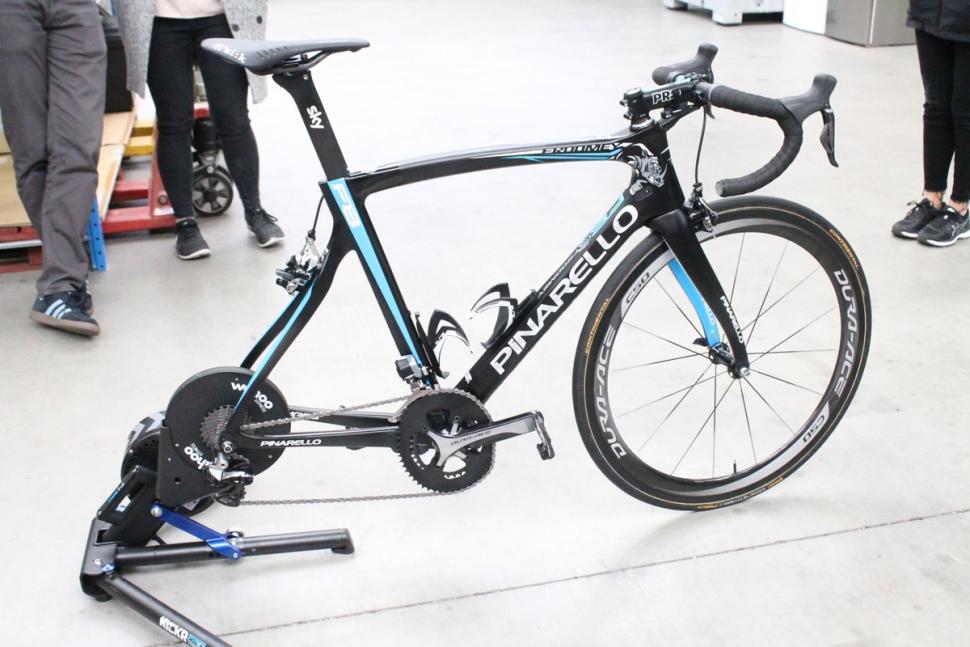 “In cycling the norm was that riders would get to the line, speak to the media, go to the bus, get a shower, go back to the hotel and get a massage.

“Our coaches and sports scientists said this was crazy. To start the recuperation phase quicker they said the riders should get on the trainer before even speaking to the journalists. We started doing that and all the other teams would laugh.”

Team Sky has been instrumental in the design of several helmet designs from Italy’s Kask. The everyday road helmet is the Protone, first unveiled at the Tour de France in 2014.

“The Protone has been developed in close collaboration with Team Sky’s riders and sports scientists to give an advantage in the majority of the Tour stages,” said Kask at the time. “The helmet has one of the lowest drag coefficients (cx) of any ventilated helmet, and among the fastest rates of heat dissipation too.” 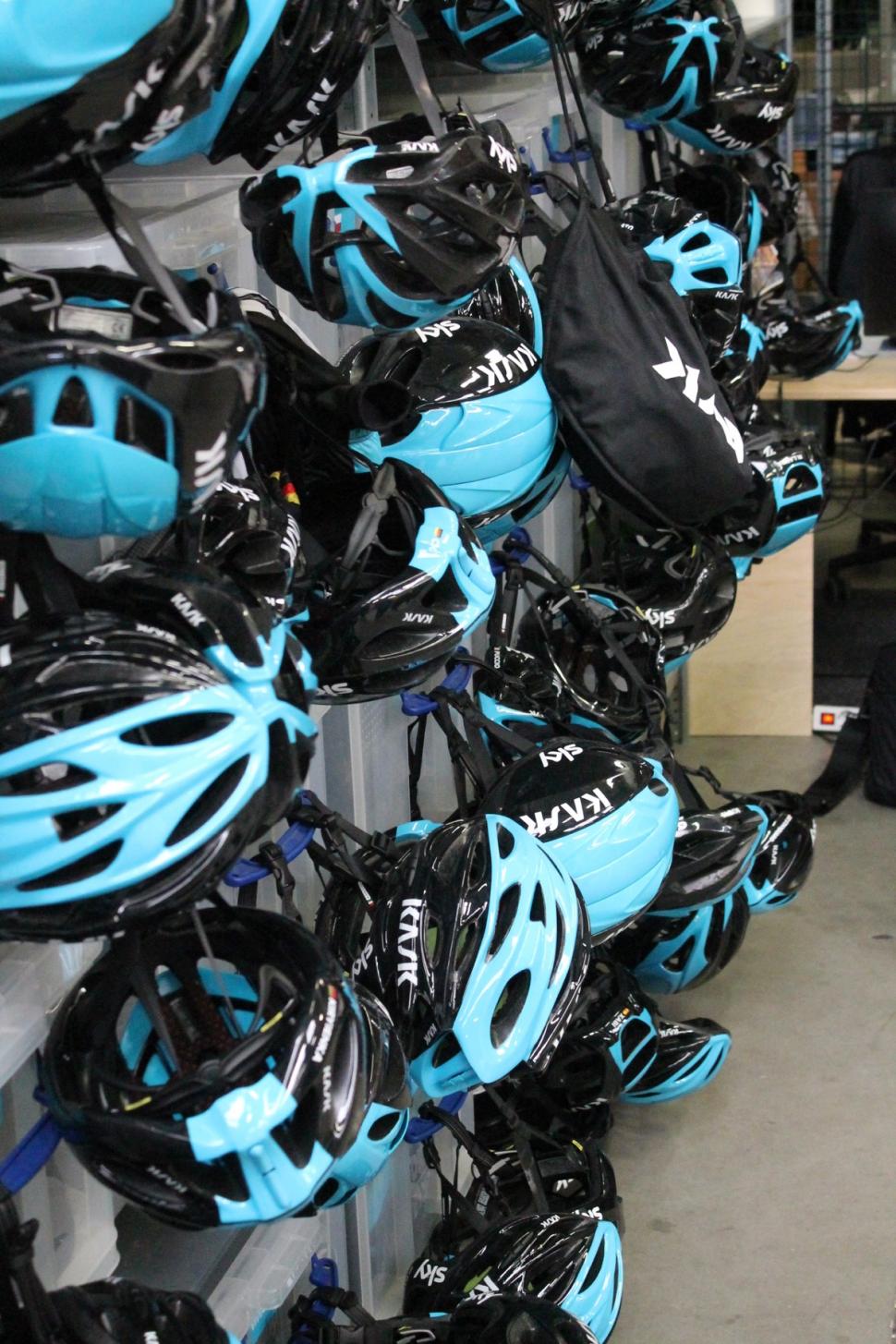 The second generation of the Protone was released last year – just months after the original – after Team Sky asked for some tweaks.

Team Sky also had a hand in the development of the Kask Infinity, the first bicycle helmet to allow the rider to switch the vents from fully closed to fully open, and the Bambino time trial helmet.

“We asked for all three models; they started with an idea from the team and Kask has made them for us,” says Carsten. “Because it works for us, it also seems to work for the consumer.” 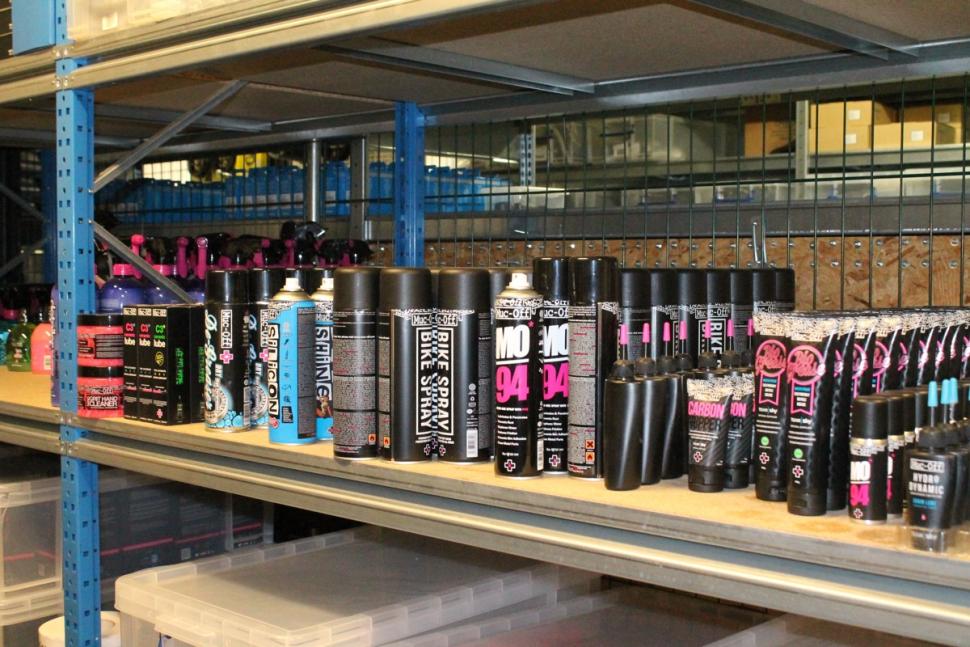 “We have developed specific lubes with Muc-Off,” says Carsten. “We have a new grease for really bad weather conditions coming out that we have spent a lot of time working on with them. Dirt doesn’t stick to it.”

12. There’s a flat at the Service Course 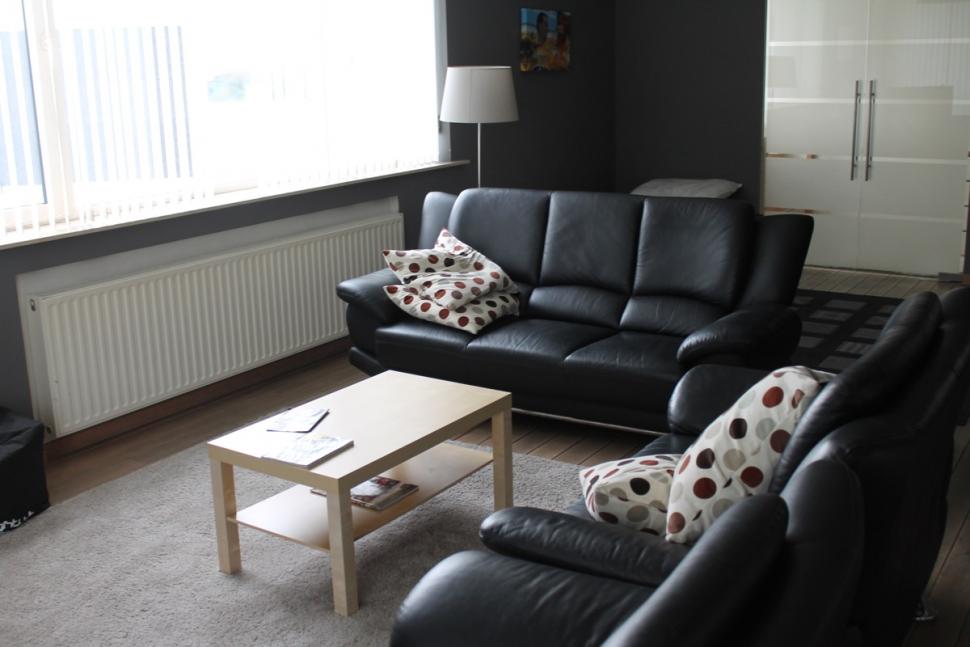 The Service Course incorporates a flat where team staff can live while they’re working there. You’d never know that you’re essentially upstairs in a warehouse.

The idea is to create a comfortable environment where staff can relax in their downtime.