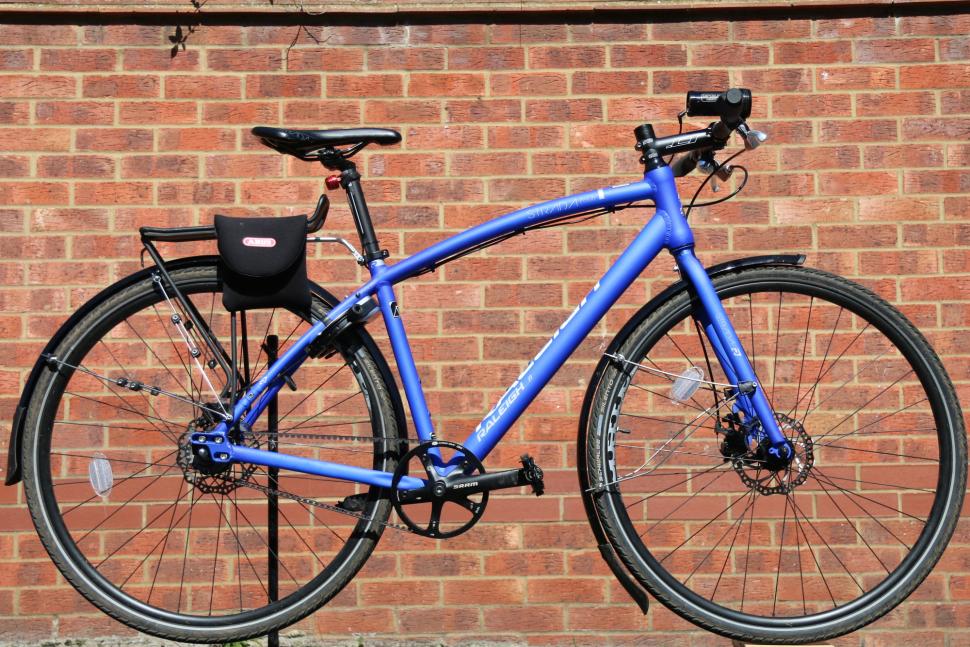 Project Practical: How to build a fuss-free everyday bike

Want a bike you can just hop on and ride? Here's our take on the idea
by John Stevenson

Sleek, high-tech bikes are all very well, but what if you want a bike that doesn't require special clothes and clickety-clackety shoes? I set out to make a practical bike that used the best of modern technology.

I was chatting with bike company media manager Chris Garrison at a bike show and the topic rambled round to how inconvenient us bike geeks make cycling. She’d had a revelation while riding an electric bike that was kicking around her office and loving the sheer ease with which you could hop on it and do stuff. In my case it had been borrowing my step-daughter’s B’Twin Hoprider 520 hybrid (£320) for nipping to the shops.

Both the bikes we’d been riding came with all the trimmings: rack, mudguards, lights, chainguard, a built-in lock and even a kickstand. That means riding them is as simple as getting them off the rack and setting off. No looking for shoes, no swapping lights from another bike, no worrying about getting soaked from road spray if it rains, no need for special trousers, no need even to lug around a D-lock if you’re just stopping at the shops for a few minutes. The B’Twin even has a basket (not a stock item but dirt cheap to add) so small shopping trips don’t need panniers.

This, it turns out, is brilliantly liberating. Step-daughter rides her B’Twin to school every day. She just pops her backpack in the basket and away she goes.

I had to have something as simple and practical. Project Practical was born.

The advantages of belt drive 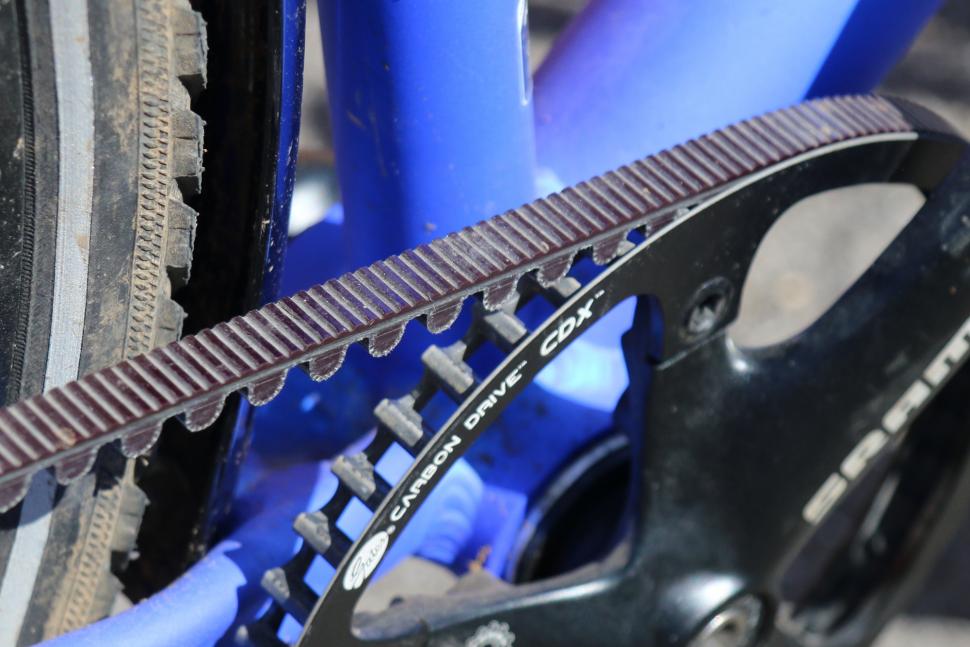 The starting point was a Raleigh hybrid I had kicking around because it had been discontinued before I had a chance to review it and I hadn’t got round to sending it back because I’m a slackarse.

What made this bike perfect for Project Practical was its combination of a Gates belt drive and SRAM Automatix two-speed hub.

The Gates Carbon Drive, to give it its full name, is a toothed belt that runs between wide sprockets in place of the usual chainring and rear sprocket. It’s clean and silent, needs no oil and doesn’t have spiky bits that’ll eat your trousers, so you don’t need a chainguard. It needs a hub gear if you’re not going to run a singlespeed, but you can get sprockets to fit just about any hub gear you can think of. It’s brilliantly simple. The seatstay is separable to allow the belt to be changed when it wears. Gates claims three times the lifespan of a chain.

You might be wondering why you don’t see Gates belt drive bikes more often. The belt and sprockets are expensive, and the frame needs a separable seat stay so you can change the belt when it wears out. As Raleigh product manager Terry Blackwood puts it, “I want to make a bike like this as a £300 three-speed, but by the time you’ve put on the belt you end up with a £600 bike.” 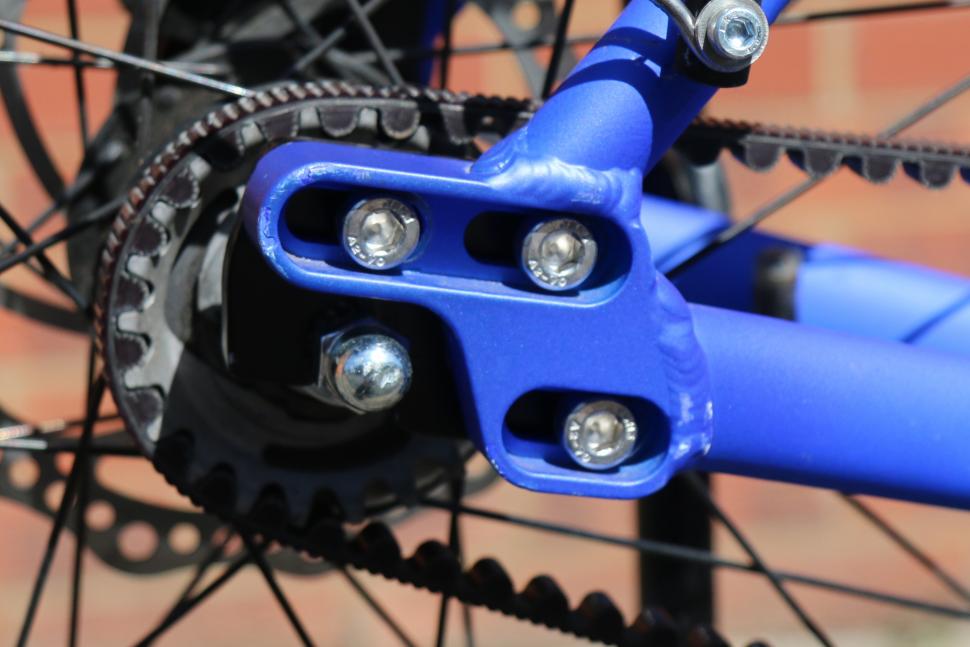 Sliding drop-outs allow the belt to be tensioned.

This is a pity because in use the belt drive is indistinguishable from a chain, except for the lack of greasy marks on your jeans and frayed right-hand cuff.

Raleigh still makes a chain-driven version of this bike, the Strada 4, which can be found for as little as £440. If you fancy a belt-drive bike and need an 18in frame, there are a few of the belt-drive version still in retailers for £450.

The Automatix hub is similarly convenient. It’s a two-speed epicyclic gear with a centrifugal clutch to do the shifting. You get to about 10mph and it shifts up for you, which means no thinking about gears and no shifter to clutter up the handlebars.

In many places that wouldn’t be very practical, but it’s fine here in Cambridge where all you really need is a getting-started gear and a cruising gear. It’s only downside is that, for me, it shifts up at a bit too low a speed. It’s possible to modify this, but it involves taking the hub apart and bending an internal spring so I’ve not yet been brave enough.

Aside from that, though, the Raleigh is a typical striped-down British hybrid. I’m told by various bike industry contacts that attempts to sell fully-equipped bikes in the UK fall flat. Even when it’s a bike for simply getting around, people don’t want to pay the extra for mudguards, a rack and so on.

This is, I submit, utterly bonkers.

If a bike comes with a rack and mudguards, the extra cost will be less than adding them later and your arse will be dry from day one. Taking at face value the claim that people don’t buy full-fat bikes, you have to wonder what kind of delusion of everlasting sunshine these people are living under. This is Britain, ferchissakes. It rains a lot.

Evans Cycles has a big range of hybrids compared to most online retailers. Counting bikes at Evans’ website, only about a fifth of hybrids have mudguards. So there you go; 80 percent of Brits are delusional about the weather.

I don’t like a wet arse, so I set about turning my Raleigh into the ideal round-town bike.

Equipped with a determination to have a get-on-and-ride bike, I gathered the first set of parts necessary to turn a bare bike into something useful for everyday riding: mudguards, rack, lock and lights. 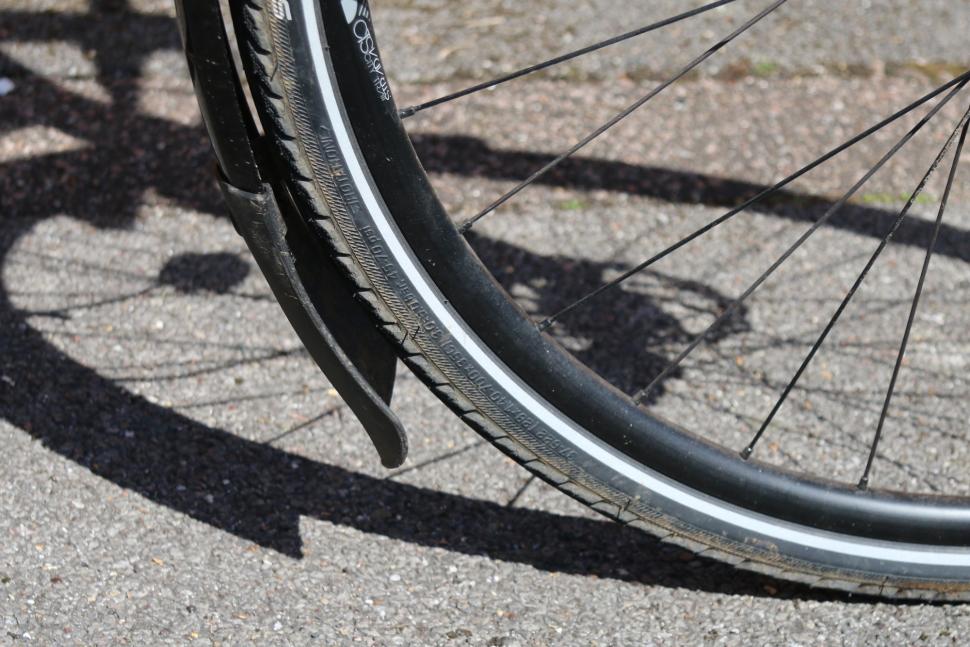 First, mudguards. There are a lot of options out there, but if you want to stay as dry as possible, SKS Longboard guards (£23.99) provide maximum coverage. The front guard almost touches the ground, so your feet stay dry, and the rear keeps spray off anyone behind you.

The Raleigh has disc brakes, so its mudguard eyes are in unusual places. That meant some careful bending of the front stays to get them into the clamp bolts, but the rear stays just weren’t long enough. Fortunately I had a Bontrager NCS mudguard kicking around with adjustable stays. A few minutes’ work with a Dremel cutting disc and I had a stay that was long enough for the job.

A practical bike needs carrying capacity, so on went a rack. Another niggle: the rack eyelets on the frame were oddly positioned so I grabbed a seat clamp with built-in threaded holes to put them in a more sensible place. A Dutch lock is permanently mounted on the frame so it's always there when you need it.

One of the things I liked most about my step-daughter’s bike was not having to lug round a lock because it has one mounted on the frame. Variously called a Dutch lock, frame lock, wheel lock or nurse’s lock, this is a horseshoe-shaped contraption that mounts on the seatstays. Some frames have threaded mounts for a Dutch lock, but they’ll fit standard frames too.

Axa and Abus are the big names in Dutch locks. My step-daughter's bike has an Axa Defender (£17) so for variety I went for an Abus Amparo (£27.47) on the Raleigh. Both offer the option of a key that stays with the lock when it’s open so you don’t even need to find your keys when you’re nipping to the shop. 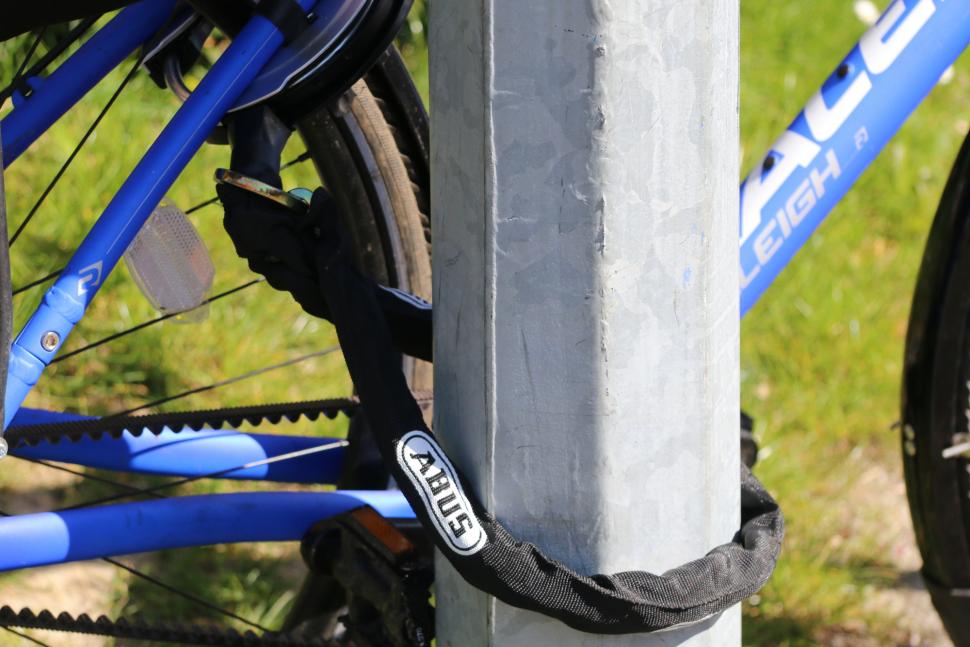 An optional chain extends a Dutch lock so it can be used to lock a bike to a solid object like a lamp post.

A Dutch lock isn’t as secure as a top quality D-lock but it’ll stop a casual thief from riding away on your bike. If you want more security, you can get add-on chains and cables that slot into the lock so it can be attached to a fixed object. The Abus Amparo chain (£18.22) comes in a pouch that hangs on your rack.

Blinded by the light 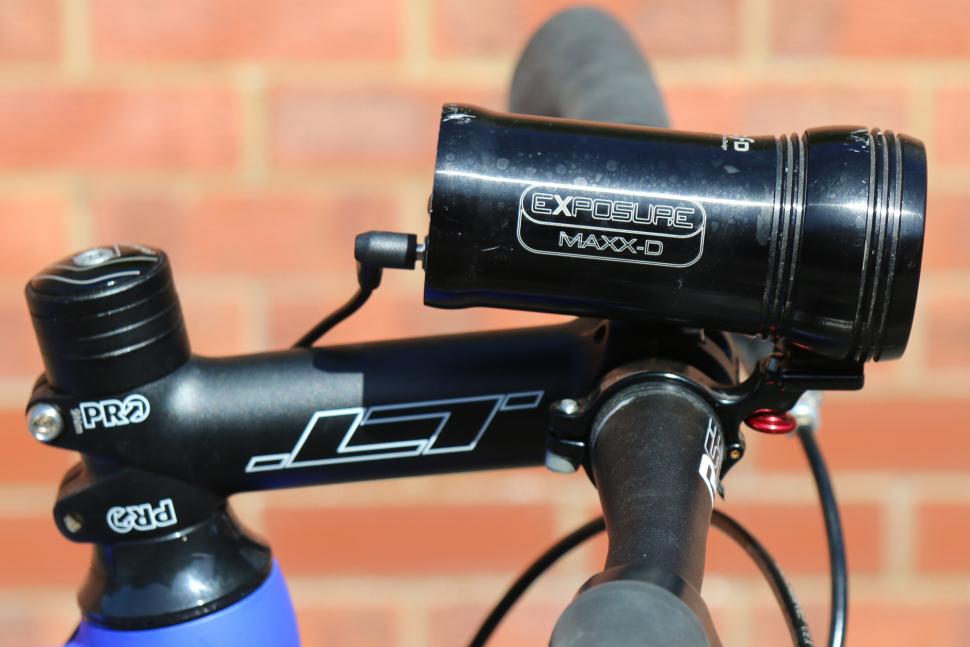 A well-used Exposure Maxx-D lights the way. I like a long reach so I slapped on a 13cm stem.

That leaves lights. Trying to keep the cost of the changes under control I slapped on an old Exposure Maxx-D I had kicking around, with a Red Eye cable rear light (£27.99) that runs off it. (My Maxx-D's a Mk 4 or thereabouts — the much brighter and cleverer Mk 8 is £269). I know, not cheap if you’re buying from scratch, but the Exposure system has the big advantage that you only have to remember to charge one thing. Nevertheless, the Maxx-D is overkill for the road. If I were buying new, I’d get an Exposure Strada (£202.46) for its road-specific beam.

Exposure isn’t the only system that will run both front and rear lights from one battery. Magicshine offers a set of its MJ-858 front light, 4.4Ahr battery, MJ-818 rear light, cabling and charger for £84.95. A separate battery isn’t as elegant as an Exposure set-up, but you can hardly gripe for the price.

If staggering rear visibility is the most important thing to you, then you can run a Hope District Plus rear light (£59.99) with Hope’s R2 Epic front light and four-cell battery (£179.99).

And there Project Practical rests for the moment. I have a few ideas for tweaks, improvements and extra features that I'll come back to in a future part two. Meantime, feel free to share your favourite practical bike ideas in the comments.