Riding L'Ariegeoise, a Pyrenean sportive that none of your mates have done

With 100 miles to cover and 3,500m of climbing, this is a serious mountain challenge
by Mat Brett

Cheeky! Cheeky bordering on malicious. With 90 miles and 3,000m of climbing in my legs, I’m five minutes into the descent to the finish, almost feeling the bubbles of the post-ride beer in my mouth as I slice through the hairpins… and the road kicks uphill again. Ooof! There’s something wrong here.

So that wasn’t actually the descent to the finish, then. There’s more climbing. And the sun is hot. The tarmac is hot. The water in my water bottle is hot. Everything is really, really hot.

It’s all too much for some people. They’re walking. Plodding. Zombies in Lycra and cycle shoes. 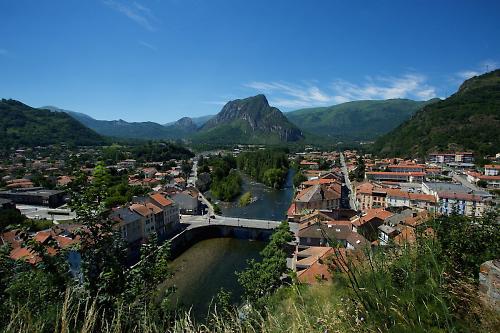 L'Ariégeoise is one of the most stunning sportives out there. It takes place in the Ariège department of France – hence the name. Look at a map of France, find the middle of the Pyrenees and go slightly to the right. That’s where we’re talking about. 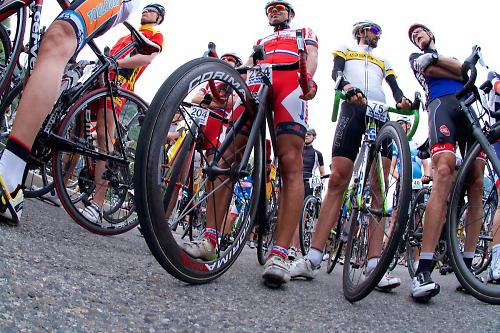 The event attracts over 4,000 riders, most of them from France and Spain, not surprisingly. Only about 80 Brits took part this year and some of those were expats living in the area. I was there courtesy of 13 Bikes, Halfords in-house brand, six of us riding on Intuition Gamma Carbon road bikes. We started the day in the little town of Tarascon-sur-Ariege and found out that 4,000 riders is a helluva lot. A river of people flowed over the start line – so many that you couldn’t work forward through the mass to begin with – and after just 20 minutes we hit the first climb of the day, the Sommet du Portel. 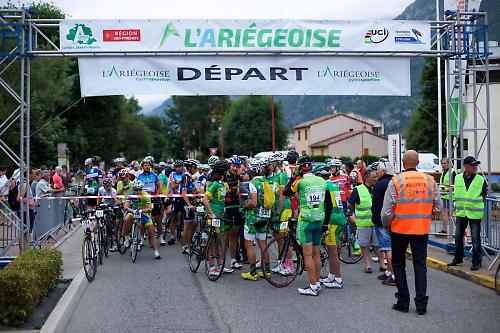 None of the climbs in L'Ariégeoise is massive by Pyrenean standards, but they’re still pretty large. I mean, at 1,432m the Sommet du Portel is comfortably higher than Ben Nevis, but they work to different rules out here. For example, Tourmalet, much further west than the area we’re riding, is 2,115m – so half as much again as Portel. But don’t let that give you the impression that L'Ariégeoise is in any way an easy option. Far from it. If you want a Pyrenean riding challenge, this is the real deal. 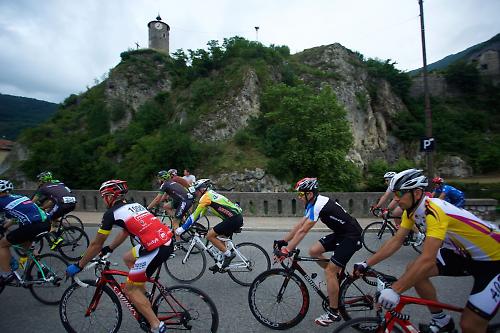 That first climb was rammed. Three different length rides all started at the same point – La Passejade (70km/44 miles, 803m of climbing), La Mountagnole (115km/72 miles, 2,772m of climbing) and L'Ariégeoise (168.5km/105 miles, 3,574m of climbing) – and those second two both headed up Portel, so it was sometimes a case of picking your way through groups of riders when space allowed. 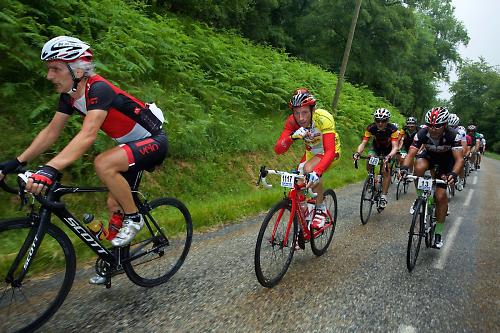 Still, no particular hurry, we had a long day ahead of us. Everyone had their name and nationality on the number pinned to their jersey, and it was cool to chat and swap cycling tales. 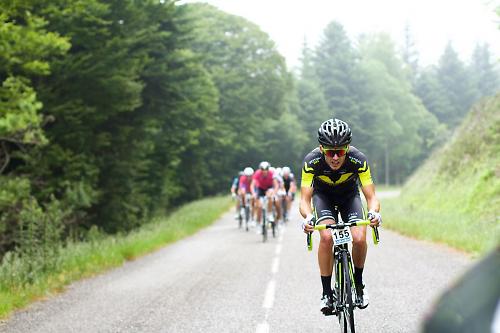 Portel isn’t a particularly steep climb, but my Garmin says it’s 19 miles from Foix to the top. It didn’t feel anything like that. Maybe that’s because it was early in the day and I’d had some extra Nutella on my breakfast croissants, or maybe it was the Franglais conversation taking my mind off the riding. 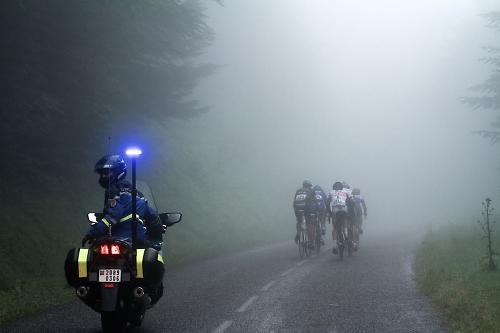 The previous day had been 36°C and we’d been looking for shade at every opportunity but today, not so much. The sun had yet to make an appearance – things could go either way as far as the weather was concerned. Conditions were getting decidedly dingy as we worked our way up through the forest. The local tourist information talks about Portel’s sublime panoramas of the surrounding region, but we were soon up in the clouds and visibility was restricted to just the closest trees. Nice trees, mind, but no sublime panoramas for us on this part of the ride.

We intrepid 13 Bikers had agreed to regroup atthe summit food station to shoot some video, and by the time that was sorted and everyone had gorged themselves on oranges and ginger cake, a short stop had turned into a long stop. 45 minutes! Oops! How did that happen? No matter. We’re not in any rush. 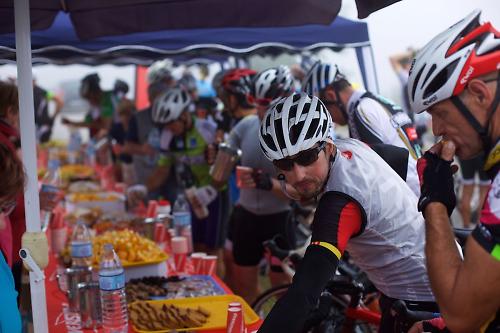 The usual deal when you ride in the mountains is that the temperature drops as you go up, but you’re working so hard that you still feel hot. Then you cool down on the descent, and by the time you’ve got back to a comfortable body temperature you’re more or less back in warmer air (okay, it doesn’t always work out exactly like that!).

We’d cooled down while hanging around at the top of Portel, and dropping your body temperature while you’re on top of a mountain is rarely a good idea. Even with windproofs and full finger gloves on, 10 minutes into the descent we were all pretty cold. No one wanted to be the first to say it, but Jim and Johnny, the guys I was riding with, were starting to look pale.

You know that when someone says, “How much further do you think it is to the bottom?”, what they really mean is, “I’m getting cold, do you have any extra clothing squirrelled away that I could borrow?”

Aside from keeping the windchill down, the other reason to take the descent steady was that the road surface was feeling sketchy. The tree-covered roads were muddy and the damp air was making them slippery, so we were tiptoeing through some sections rather than pinning it. The occasional twitch of the back wheel through tight corners convinced us that sometimes you just have to take the sensible approach and lay off the gas, as did the sight of a rider sitting on the ground having his skinned knees and elbows sorted out by the first aiders. Youch!

Back down on the valley floor we slammed through some flat miles before the second climb of the day, Col de la Core. It’s a 1,395m summit that featured in this year’s Tour de France: Stage 12 from Lannemezan to Plateau de Beille. Lampre-Merida’s Kristijan Durasek took maximum King of the Mountains points on this climb in light rain. We were luckier. The sun had decided that it would, after all, get to work for the day, and things were brightening up. I loved this climb. If you take the start as Les Bordes-sur-Lez, it’s about nine miles long with some flat sections to break up the hard work. We got some amazing views across the valley as we wound our way uphill, before heading back into cloud only right at the top. I went hard for the last couple of miles, keen to bank up some warmth for the descent, but I needn’t have worried. With the day heating up, getting cold on the way down wasn’t an issue anymore. We got more flatish miles in the bag following the Garbet river to Aulus-les-Bains, refilled our water bottles and got ready to tackle Col d’Agnes.

I’ll tell you something about Agnes: she’s a spiteful cow. I’ve ridden in the Pyrenees a few times, including Peyresourde, Aspin, Tourmalet, Soulor, Aubisque and Osquich in a day (did anyone drop some names?), and even in that company I found Agnes a bit nasty. /content/news/20458-video-raphas-1910-tour-de-france-challenge

Why? The pass is only a moderate (by Pyrenean standards) 1,570m high and just 6.5 miles long, but the thing is that it kicks up hard from the off. The first couple of miles are steep and I was seeing heart rate numbers on my Garmin that I really didn’t want to see at this stage of the day. Although the gradient levels off a bit as you go higher, you really don’t get comfortable again. Add in the fact that the sun was now turned up to max and this was a harsh climb.

I was doing alright up here, giving myself a pat on the back for sticking with the hill training back at home, but I was glad to ride underneath a hosepipe shower that had been set up at one point, a glorious respite from the heat. I was also counting down the distance to the top, willing the figures on my computer to tick over faster. 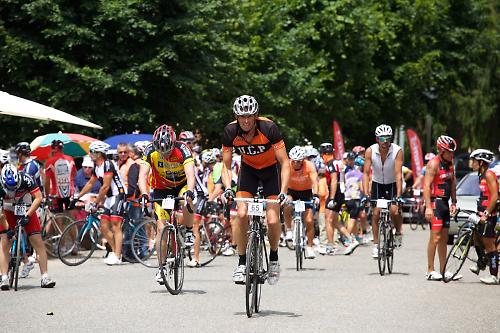 Agnes has featured in the Tour de France a few times, and it had a bit of Tour feel to it on L'Ariégeoise day with camper vans of spectators setting up pitch on hairpins to watch the riders go by. You have to give them a smile and a quick “bonjour” as they clap you around the bends. It’s the least you can do. 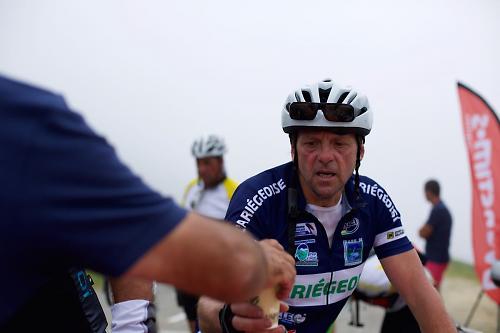 I can’t say that all of the riders were looking particularly Tour de France at this stage. Rounding a corner you’d see someone sitting on the side of the road having realised that, actually, they weren’t as close to the top as they’d imagined. Hope stolen from them, they’d flop down on the tarmac and wait for energy to descend from the skies. Two vertical miles of climbing can take the Tigger bounce out of your legs. 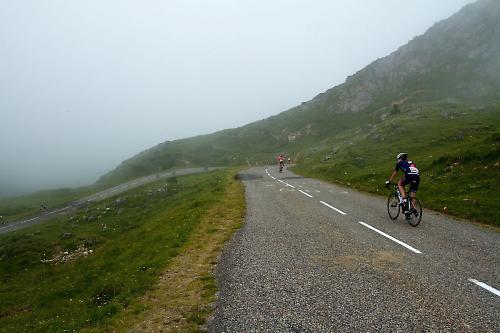 Past the 3km to go sign. 2km. 1km. 500m. A quick water grab at the top, and we’re heading downhill. But then, just as we were getting into the descent, we hit that last climb up Port de Lers. 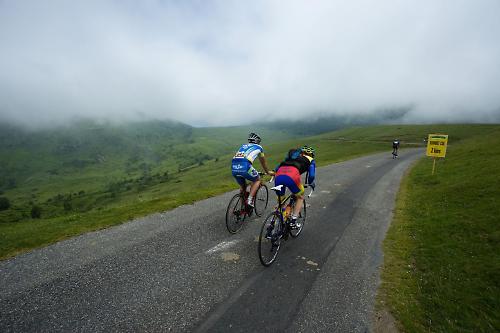 Fair enough, it’s a climb that’s clearly shown on L’Ariegeoise parcours. Equally fair enough, we were still putting our bikes together at one o’clock this morning ahead of a six o’clock alarm call. Some things get overlooked – like an extensive knowledge of the route. Although short, late in the day that last climb really was a killer. 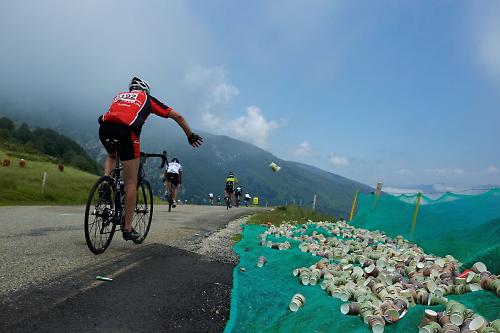 We zigzagged our way through a herd of cows with bells around their necks and then got the reward for our hard work: a seven-mile decent weaving down to the finish. With clear skies offering spectacular views across the mountainside, it was cycling heaven. 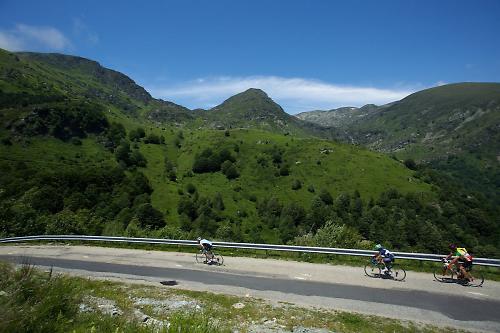 L'Ariégeoise is a fabulous event. Yes, it’s a tough route – there’s no such thing as an easy ride that involves 3,500m of climbing – but it’s well worth it if you put in the training miles and want a challenge. 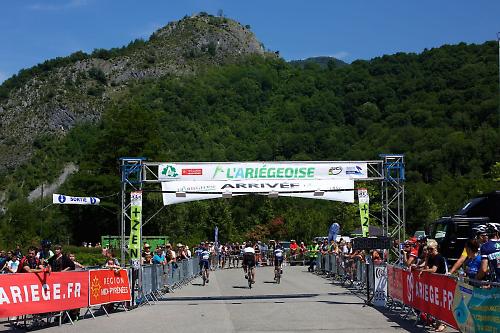 Thanks to 13 Bikes for organising the trip and lending us the 13 Intuition Gamma to ride. 13 Bikes will be exhibiting at The Cycle Show 2015 at NEC Birmingham, 24-27 September 2015.

Here's a short video 13 Bikes put together with us at L'Ariégeoise:

L'Ariégeoise is an extremely well run event. The food stops and signing were excellent, there was a load of motorcycle support to help out anyone with a mechanical issue, and the 2015 entry fee was just €53 – about £37.

Unlike L'Etape du Tour, L'Ariégeoise doesn't follow the route of a particular stage of the Tour de France, but at over 100 miles long and taking in more than 3,500m of climbing, it is the equivalent of a tough Tour stage.