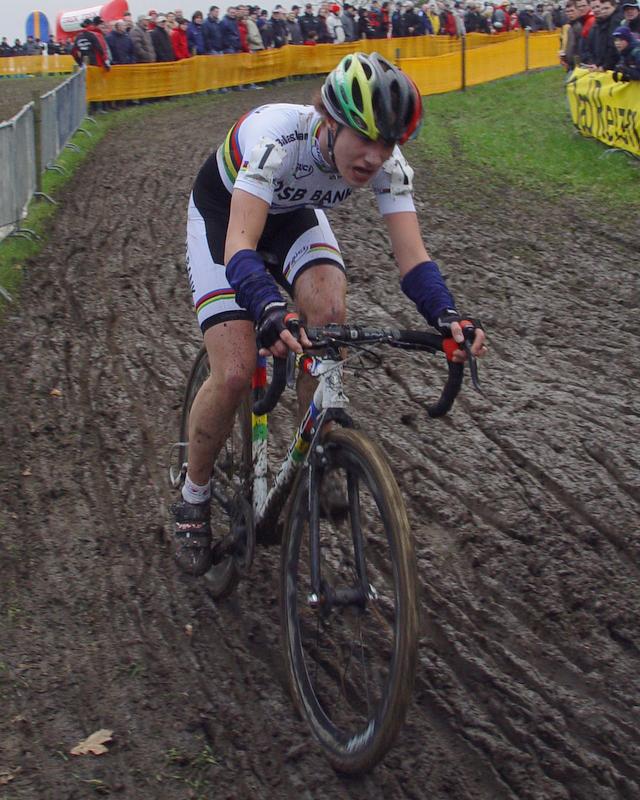 Multi-disciplinary champion talks about her career, her goals and the fight against doping
by Simon_MacMichael

World cyclo-cross champion Marianne Voss, who has also won world and Olympic championships on the track as well as the world road race title,  is one of the latest riders to sign up for Bike Pure, the Ireland-based organisation that in less than two years has become a major voice in the campaign for a clean sport, free of doping.

In this interview, reproduced with kind permission of Bike Pure, the Dutch star talks to Bike Pure co-founder Andy Layhe about her career to date, her plans for the 2010 road race season, the fight against drugs and whether cyclocross should become an Olympic sport.

It’s hard to believe that Marianne Vos is just 22 years of age. In 2006 she became the youngest ever World Cyclo cross champion, aged just 18, then added to her rainbow jersey collection a year later with victory in the World Road Race Championships. Add to that the World title she took on the track, making her the first woman in the history of the sport to hold three World titles across separate disciplines.

Off the bike, Vos, born in Brabant in south west Netherlands, is softly spoken and polite, yet on two wheels is fast becoming the worlds most dominant female rider. Renowned for her ruthless sprinting ability and desire to win she has many more titles ahead of her. I asked her how she got involved in the sport, “Like many other kids I followed my father and brother in the sport they did. When I was nearly six years old my parents gave me my first race bike. I liked (and still like) all sports in general, I did gymnastics and (ice) speed skating, but cycling was the thing what I enjoyed most.”

A passion for cycling

During our interview it is clear that Vos has an overwhelming passion for the sport of cycling, doesn’t see it as a job, yet is happy to be riding her bike whether it be on the road, cyclo-cross circuit or the boards of the track. Its difficult for riders to focus on one discipline of the sport, so I ask how she manages to maintain a high level of fitness all year round, “I like the competition, the pressure in the races and fighting for the victory. To compete the whole year long I have to have good basic form, that entails spending many hours on the bike at a relatively low speed, only then I can do the specific training to get 110% at the ‘big’ races.”

Vos feels its best not to spend too mush time off the bike between the end of the cyclo-cross season and beginning of the road season in order to stay in shape, “Between the seasons I don’t take too long off, only one or two weeks, but I take some more rest during my races in the season.” I ask if there is a particular discipline she prefers, “I like to combine them, because I like the variation. It’s all on the bike but one each has different variations of training, different races and different people, so I don’t get bored by doing the same thing. Mixing my disciplines helps me to stay focused the whole year and they help me to become a more complete rider.”

The fight against doping

I first met Marianne during a recent trip to the World Cyclo-Cross Championships in Tabor, Czech Republic. As Marianne prepared on her turbo trainer the day prior to taking the world title, we discussed the current state of pro cycling and it was there that she agreed to become part of Bike Pure. We had been in touch some weeks before yet Marianne was initially unsure of committing herself to our organization, “My belief is that is has to be normal to perform clean, that it shouldn’t have to be necessary to say you don’t use any doping. But the more I thought about it, I felt sure that by not joining Bike Pure would not help, so that made me change my mind.”

Shortly after Marianne decided to join we received an email from an individual saying that riders who have such an extensive list of palmares ‘must be doping’. This is an all too common judgement of top riders and speaks volumes as to the distrust some fans have towards riders. I ask Marianne how she defends herself in such situations, “The problem is that people can say that without even knowing you and without giving me the possibility to defend myself. I know people have to trust you when you say you don’t use any performance enhancing drugs. The fact that I have had countless tests which were all negative isn’t an argument. All I can say is I’m an ambitious person and I can’t believe a rider could be pleased with a victory that was won in an unjust way. I’m grateful for the talents I have and by training and motivation I want to get the best out of myself, naturally.”

Women’s cycling doesn’t seem have the same extent of doping as the men’s side, I ask Marianne for her thought’s, “I think the most important difference with men’s cycling was that we don’t have as much media coverage and there’s not as much money involved. Although the women’s side of the sport has grown very fast over recent years and because it’s getting more professional, we have to ensure it will not go like the men’s. It’s important the UCI and WADA keep a close watch, to enable the sport to remain clean.” I mention that maybe it’s the fact that the women’s events aren’t as long as the mens, “I don’t think the shorter events are the reason, because I believe people don’t dope to get the finish line, but only for the win.”

Zero tolerance the way ahead

There is a feeling that the sport is slowly cleaning up and fans are regaining some trust in some of the victories they see, “I know it’s a hard fight and cycling has suffered a great deal of damage because there have been so many riders doping. But now I think it’s going in the right direction and the zero tolerance approach is the only way to regain credibility.” The newly established test for Human Growth Hormone is a major development, not only within cycling, but sport in general as is the ongoing data being analyised under the bio-passport, “The HgH test is a great development.” Marianne went on, “More and more substances can be found in blood and urine, so athletes who think they can outsmart the anti-doping organisations will suffer. Also retrospective tests and suspensions will frighten the athletes.”

Being so young, Marianne has the best years and hopefully many more titles ahead of her. When asked what is her most prolific victory to date, she has no hesitation, “Of course my Olympic gold in the Points Race at Beijing is my biggest achievement, that was a very fulfilling victory.” Vos still feels she has a lot to improve on in her seasons ahead feels that certain aspects of her ability have let her down in some events, “I had some problems at the road race at the Beijing Olympic Games and the time trial was not as good as I had hoped, it was amazing to take home the gold after the Points race though. I feel I’m getting stronger every year and that motivates me to improve at things that don’t suit me well, like time trials, long climbs or muddy courses in cyclo-cross.”

Cyclo-cross and the Olympics

At the time of our interview, the Winter Olympics in Vancouver were in full swing and with cyclo-cross such a global sport now, I ask Marianne about its proposed inclusion at any future Games, “I really would like to see cyclo-cross in the Olympics. As you say it’s a good point that the sport is getting bigger not only in Western Europe but in the USA also. It’s a good start we get the Worlds at Louisville in 2013. Cyclo-cross is a fast, spectacular and media-genic sport, so therefore I really think it has a chance to be an Olympic sport in the future.”

Our thoughts turn to Marianne’s future, once she has hung up her racing wheels. She is currently studying psychology when time off the bike allows, “I hope I can remain in the sport, may be within a team or maybe as a psychologist. Firstly I hope to continue racing for another ten years or so. I would like to be remembered as a nice, sportsmanlike and fair play competitor. Of course I hope people remember my victories, but for me it’s most important how to be as a person.”

After winning the recent Cyclo-Cross Worlds, Marianne spent time recuperating in Majorca, riding her bike and relaxing in preparation for another long road race season where she hopes to once again take the world road race title in Australia. I ask Marianne why she thinks she has been so successful and her goals for 2010 “On the road my strongest weapon is my versatility, although I’m trying to focus on my climbing and time trialling, because those will help me become a better cyclist. In stage races this season like Tour de l’Aude and Giro d’Italia (both very hard this year) I’ll try to get myself in the top of the general classification. After these races I’ll focus on the Worlds in Melbourne.”

Marianne will be riding for team Nederland Bloeit this season. Please see the team website here.

We wish Marianne all the best and we’ll be following her progress this season.