Dirty Cross Training And Why Peter Sagan Can Climb

Want to unleash your inner Peter Sagan? Dave Smith explains why mountain biking can help you do just that
by Dave Smith

If you ride on the road, the chances are that your training consists of riding on the road. A small percentage of you may also do a little bit of running, maybe lift some weights and yoga if you’re really weird (and enlightened).

Any activity that is different from your main sport can be termed as ‘cross training’ – if it has benefits that carry over into making you faster/stronger/more comfortable on the road bike.

So how about adding some cycling as cross training? You remember mountain biking don’t you? It’s like road cycling only different, and what we’ll look at here is why it’s different enough to be considered as cross training, and why it could well make you faster on skinny rubber.

Before we look at why your mountain bike is a great training companion, let’s look at what is involved in riding a road bike.

Essentially, you sit on the bike, adopt a comfy and aero position (within reason) and then your feet go up and down. Your upper body is involved in maintaining the position, and if you relax it you’d flop onto the bars. So from your hands to your arse there should be little movement, rather you form a rigid chassis to allow efficient power transfer through the cranks. What we’re looking at is a very basic linear movement pattern. Feet up and down, they don’t go out to the side and your hands don’t make shapes either.

If the muscles that are working to maintain your position on the bike are more efficient, they’ll do more work for less oxygen and fuel. They’ll suffer from less fatigue, and as you may know, success on a long ride is as much about comfort on the bike as fitness.

Mountain biking is a great way to get an upper-body workout, whilst also training the propulsive muscles. Riding technical trails you’ll be steering, braking, standing, sitting and squirming to find traction. And all without having to deal with traffic once you get past the Audis in the trail centre car park.

Your torso will twist, you’ll shift around on the saddle to get over obstacles, round switchbacks, and skip across wet, diagonal, off-camber roots. If you’re lucky.

On steep climbs you’ll have to work on keeping the front wheel down and the rear tyre hooked up, so more body contortion is required. On long descents your hands and wrists will take a battering from the terrain and the braking. 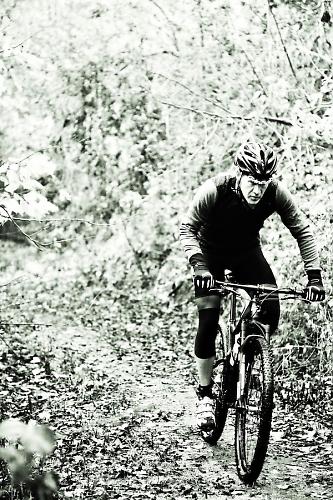 So it seems like a no-brainer that off-road riding will help develop more efficient upper body musculature. What about the legs?

Well generally your cadence will be lower on an MTB, which has the effect of requiring a greater force to be developed per pedal stroke. Let’s say you ride at a set number of watts on the road bike, and a 90 rpm cadence. If you drop to 70 rpm the muscle must produce more force (higher gear) to keep the power as high, as the rpm affects the distance aspect of the equation for watts.

If the force required is higher, the muscle will adapt in time to be comfortable producing a higher force. Gradually you can help translate this into higher force (bigger gear) back up at 90 rpm - which means more fasterness.

In addition to helping develop more power, the lower cadence and search for traction ensures that mountain biking helps to develop a smooth pedal stroke. If you try pedalling like you’re chopping wood, you’ll not make great progress. Dare I even say you’ll be pulling up on the pedals much more frequently than road riding encourages. Hopefully, if you concentrate on it (it’s a skill that has to be learned) you’ll develop a smoother delivery of power back on the road.

Finally, your biking handling will improve with less serious consequences than pushing the boundaries of traction on road rides. You’ll learn to let a bike slide without panicking, you’ll gain better balance in turns, you may even learn to bunny hop logs which may mean you can bunny hop your road bike over fallen riders or rabbits.

Now few things make me cringe as much as commentators branding a road pro’ as a ‘former mountain biker, the inference being that they must be an amazing bike handler. It’s not always the case and it also belittles the guys who learned to handle a road bike quite fine without racing mountain bikes. However, the cost of getting it wrong off-road is usually less severe, which encourages more experimenting with gravity and traction and fewer unplanned excursions into the Armco of an alpine descent.

So having seen why getting on a mountain bike may make you faster on a road bike, I’d like to cover a topic that has bugged me for years.

You know the ‘sprinter’? Well time and time again I’ve seen snide comments online about him being able to climb. How can a sprinter climb like that? He must be on Spanish steak or special sauce – surely?

A more appropriate question would be ‘how can a climber like Sagan sprint’?

Sagan was world junior cross-country MTB champion in 2008. He won the title in Val de Sol, which is rather hilly as you can see from the course profile. The race lasted around 1’35” and he won by quite a margin. You can’t win cross-country races at world level unless you can climb. The twist is that the nature of the climbs that Sagan is good at on the road are around 5-15 minutes long and not super steep. This tells us something about muscle fibre type. Many of you will have read of muscle fibres and know we have slow twitch fibres (type 1) and fast twitch fibres (type 2). Marathon runners have predominantly slow twitch fibres that are slow to tire but can’t produce huge forces. Sprinters have predominantly fast twitch fibres that tire quickly but generate huge forces.

What about Sagan and his ilk? Enter the Type 2a fibres that have attributes of both slow and fast. They can generate higher forces than type 1, but are less prone to fatigue than ‘pure’ type 2. They’re the road sprinters friend, and the mountain biker’s engine room.

Now, the great news if you want more power is that specific training can transform type 1 and type 2 fibres into type 2a. The other great news if you own a mountain bike is that the type of training that helps is rather similar to that you’ll be getting if you do off-road rides at a decent pace.

Just make sure you have enough laundry detergent for the inevitable outcome.