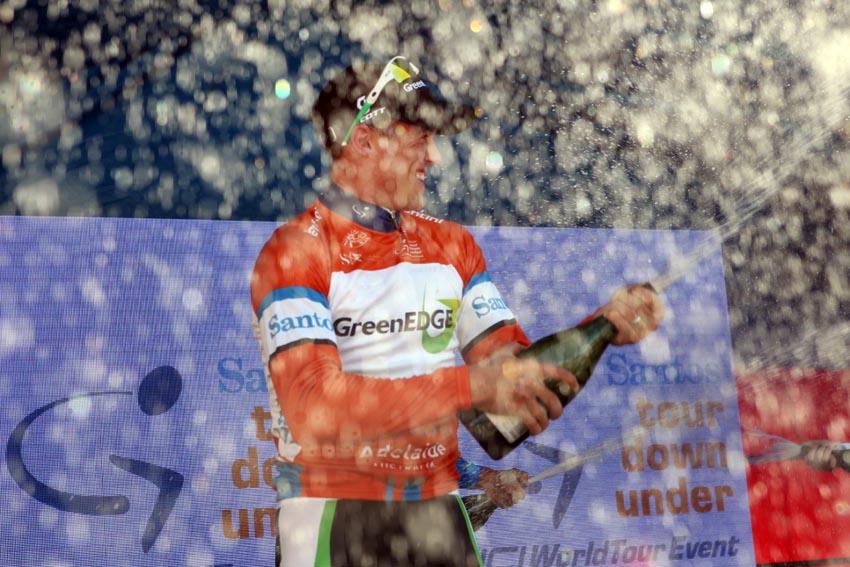 2014 season gets underway in South Australia next week - can anyone stop Gerrans in the GC and Greipel in the sprints?
by Simon_MacMichael

The 2014 riders, bikes and kits have been presented, and the UCI WorldTour heads into a new season next week with the Santos Tour Down Under, which begins on Tuesday and ends the following Sunday – Australia Day. It’s also the first event in our season-long Fantasy Cycling competition, with some terrific prizes to be won courtesy of Wiggle. Here’s our preview of the race.

With South Australia’s coast and vineyards providing much of the backdrop, the six stages include a mixture of sprinter-friendly circuits, as well as a penultimate day that will see the peloton twice tackle the climb of Old Willunga Hill, which has proved decisive for settling the overall standings since its introduction two years ago.

Last year, Team Sky’s Geraint Thomas, went into that stage with a five-second over Blanco’s Tom-Jelte Slagter, and was dropped with a little over half a kilometre left. The 2012 champion, Orica-GreenEdge’s Simon Gerrans won the stage, while Slagter sealed the overall win the following day.

While Old Willunga Hill should once again settle the overall, it’s likely that the climb of Corkscrew Hill on Stage 3 will determine which riders go into that penultimate day with a chance of winning the race.

Adelaide was the hottest place on earth on Thursday, with the temperature hitting 44.2 degrees Celsius, topping the 42 degrees experienced during the 2006 edition, causing road surfaces to melt; the temperature is expected to drop to the low 30s next week.

Some Europe-based riders may still find that tough going, especially as it’s the first race of the season – Team Sky have spent a fortnight acclimatising to the Australian summer. And as the 2014 season opener, for many riders the event will be about getting back into racing, rather than looking to challenge for the GC or stage wins.

Gerrans is a strong favourite for the overall, and with good reason. He’s looking to become the first man to win the Tour Down Under three times, and his 2012 victory came after he finished a narrow second to Movistar’s Alejandro Valverde on Old Willunga Hill. The Australian went into that race having just become national road champion – and last weekend, he won that title back.

Among other big names present are 2011 Tour de France winner and former world champion Cadel Evans of BMC Racing and Team Sky’s Richie Porte, both of whom are targeting the Giro d’Italia this year - they finished second and third respectively to Gerrans at the nationals. Meanwhile, Fränk Schleck resumes his racing career with Trek Factory Racing following his doping ban.

Javier Moreno of Movistar and Team Sky’s Thomas, who completed the podium last year along with Slagter – he won’t defend his title, since his wife is due to give birth – could well figure among the contenders again this time round.

Another Movistar rider, Giovanni Visconti, has the attacking style that could set him up for a tilt at the General Classification, and also fancied is Garmin-Sharp’s Rohan Dennis – two years ago, at the age of 21, he finished fifth overall. Two young riders of whom great things are expected, both aged 19, are Caleb Ewan, who will be joining Orica-GreenEdge later this season and rides here for UniSA-Australia, and another WorldTour debutant, Cannondale’s Matej Mohoric – the Slovenian is the reigning World Road Champion at Under-23 level.

In the stages that should come down to a sprint, the standout names are two-time Tour Down Under winner André Greipel of Lotto-Belisol, winner of a record 14 stages in the race, and fellow German Marcel Kittel of Giant-Shimano, who took four Tour de France stages last year.

There’s a lot of other top sprinting talent that will be trying to get in on the act, though, including Cannondale’s Elia Viviani, Lampre-Merida’s Roberto Ferrari and Orica-GreenEdge’s Matt Goss.

Besides Slagter, among notable absentees this year is Europcar’s Thomas Voeckler who broke his collarbone training for the race in Australia this week.

Allan Davis is the only man to have ridden all 15 editions of the race since it was launched in 1999 – he won it in 2009 – but he’s without a team after Orica-GreenEdge released him at the end of last season, so he’ll be missing this year.

The opening day isn’t the toughest stage of the race, and it should end with a bunch sprint, but with the climb of Mengler’s Hill coming 14km from the end, some of the big-name sprinters won’t be around to contest it. Those who are will fight to become the first wearer of the leader’s ochre jersey this year. 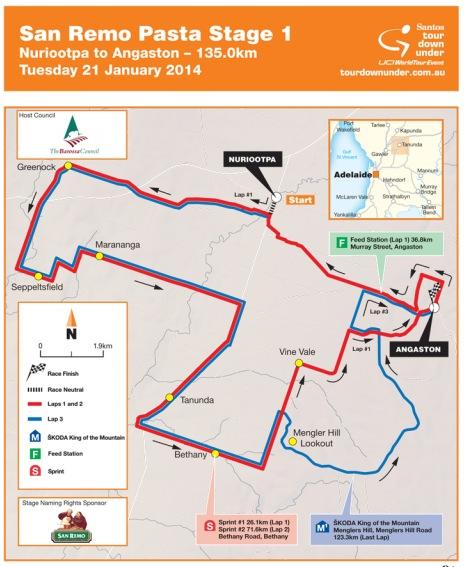 Stirling hosts a stage finish for the sixth year running, and a hilly profile in the last couple of laps means it’s likely to be a select bunch that contests the finish. Last year, Slagter won here, the bonus seconds he took putting him within 5 seconds of the race lead and helping set up his eventual overall victory. The Category 1 climb of Corkscrew Road, averaging 8 per cent in its final 2.5km, made its debut in last year’s race, Sky’s Thomas cresting it first on his way to the stage win and the leader’s ochre jersey. He won from a four-man sprint, with a group of 11 riders just behind, on a day that produced the overall contenders. 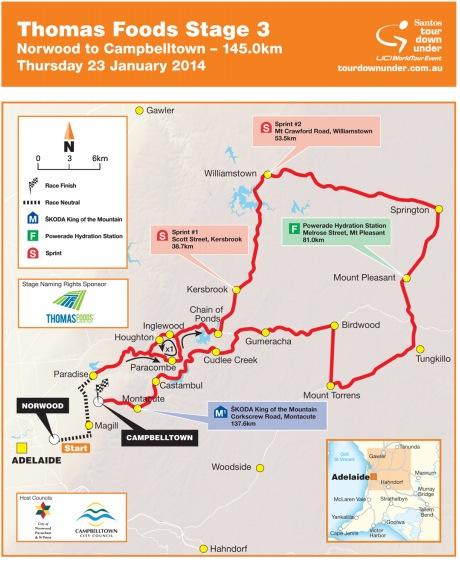 Stage 4
Friday, January 24
Unley to Victor Harbor – 148.5km
This is one of two stages that look certain to end in a bunch sprint, with a finish on the seafront at Victor Harbor. Greipel has proved time and again at the Tour Down Under that he is consistently the quickest man at this early stage of the season – can anyone challenge him? 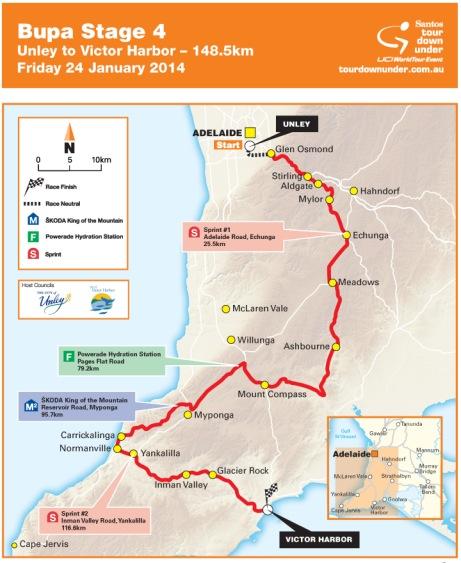 Second here in 2012 and winner of this stage last year, the climb - tackled twice, and 3.5km long with an average gradient of 7 per cent but a maximum of 16 per cent – is perfect for Gerrans. If he made the selection on Stage 2, he could clinch the overall. In any event, the race winner should be among the first across today. 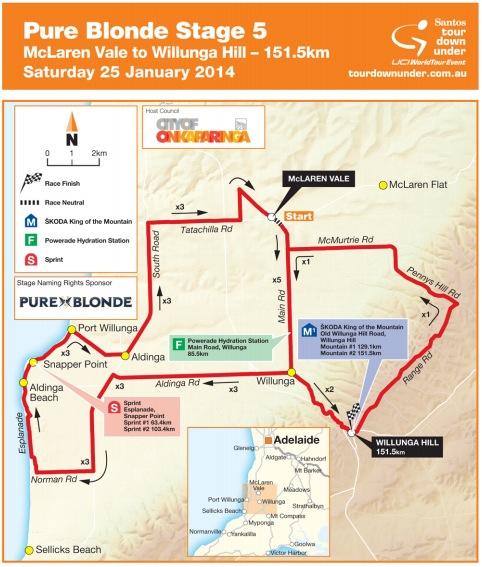 If things are tight on GC, this could be a gripping stage in Adelaide. In 2012, Valverde failed to get the bonus seconds he needed to pip Gerrans to the overall. Last year, Thomas moved from fifth overall to a third-place podium spot, and even edged out Greipel – who won the stage – for the sprinter’s jersey.