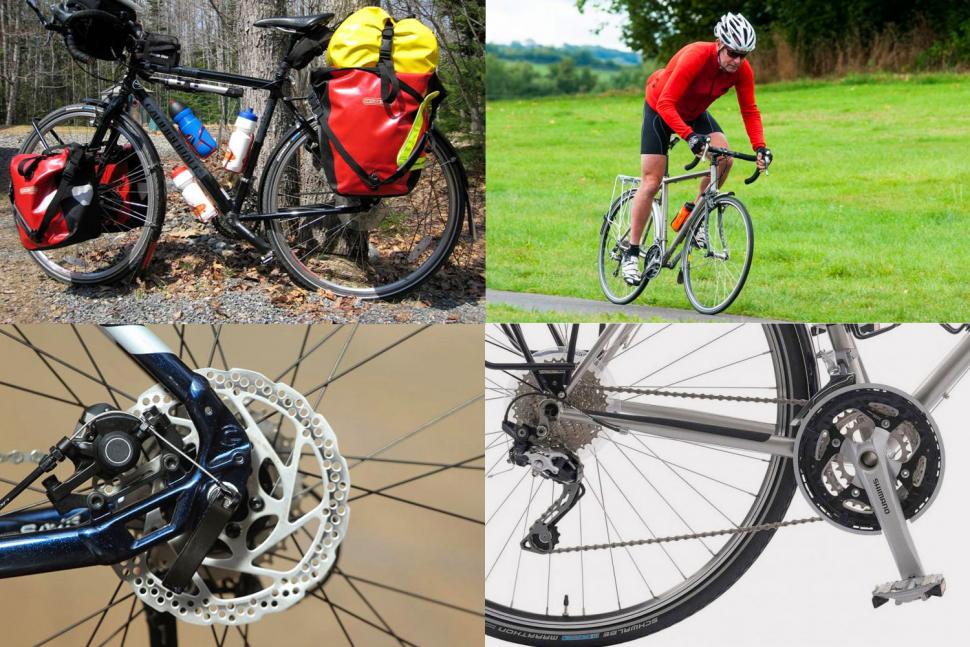 They’re a category that hasn’t had much love in the last few years, but touring bikes might be the most versatile machines around. Here’s why your next bike should be a touring bike.

Imagine taking off into the hills for days at a time — or longer — on the same bike that carries you comfortably for a Sunday ride in the hills, and gets you to work every day. That’s the appeal of touring bikes. Aside from situations that require pure speed, a touring bike will do almost everything you can imagine wanting to do on a bike.

Well, yes, that’s obvious, the clue’s in the name. Nevertheless, it bears saying that if you want to ride day after day carrying your gear and maybe even camping overnight, a touring bike is the traditional and arguably best bike for the job.

‘Arguably’ because the light-and-fast bikepacking approach eschews racks and panniers, instead strapping specially-made bags directly to the frame, handlebar and saddle. If you’re going down that route, then you probably want something lighter and faster, and you probably already know that.

For traditional touring, with a decent number of home comforts along for the ride like a change of clothes for the evening pub visit or a tent and other camping gear, a classic touring bike is the way to go.

A touring bike’s handling is designed to work with a load. You can bodge a rack and panniers on to a race bike, but you’ll almost certainly badly degrade the handling because the panniers will hang so far behind the rear wheel axle that they’ll make the frame wag under load. A touring bike’s long back end reduces this.

You can commute on more or less anything, but the things that make touring bikes stand out are that they come with mudguards and a rack, or at least the necessary mounts.

It rains at commuting times less often than you’d expect, but you can still get unpleasantly damp from wet roads even if it’s not actually raining. Mudguards help keep most of the water off you and can make the difference between a comfortable ride and getting sodden.

The best way to carry your stuff when commuting is a controversial subject, but if you don’t like a sweaty back, then panniers are the way to go. Not only will a touring bike likely come with a rack, but the chainstays will be long enough your heels won’t hit your panniers and they won’t make the whole bike waggle as badly if you give it some welly. 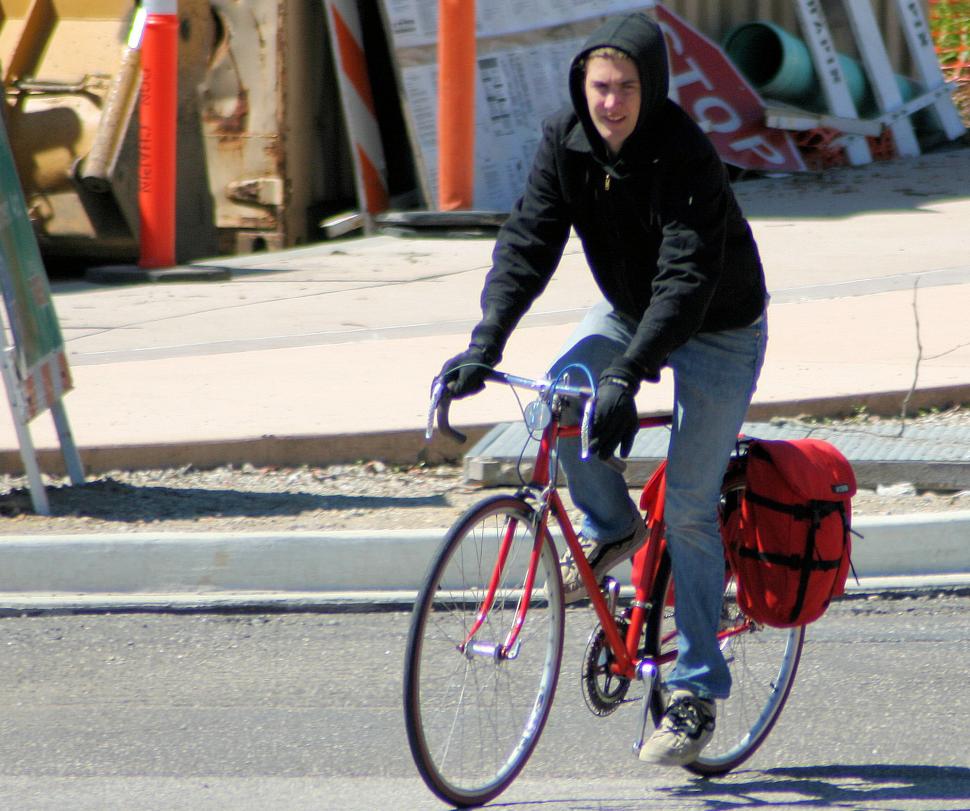 Want to carry a few days’ groceries home from Tesco? That’s going to be really uncomfortable in a rucksack. A cargo bike to carry it all may be cool, but it’s not going to fit in a tiny city flat. But a couple of large panniers will swallow a week’s groceries for one and a few days’ worth for a family. You might have to abandon the weekly mega-shop, but that opens up the chance to buy and eat more fresh fruit and veg. Win!

A touring bike has a number of advantages over a race-style bike for a day’s pootling in the countryside, even though it’ll be slightly slower on the flat and up hills.

For starters there’s actually being able to sit up and enjoy that scenery you’re riding through, rather than Frooming along looking at your stem. Then there’s the comfort that comes from fatter tyres at lower pressure than a race bike’s, and the handy feature that a touring bike’s mudguards mean you won’t get utterly drenched and miserable if you get caught in a shower.

Throw on a pannier and you can carry stuff, which opens up the possibility of a picnic in a secluded spot instead of paying tourist-trap cafe prices for lunch.

Read more: 10 of the best touring bikes — your options for taking off into the beyond

So what are the details that give a touring bike its characteristics and versatility? Let’s take a look. 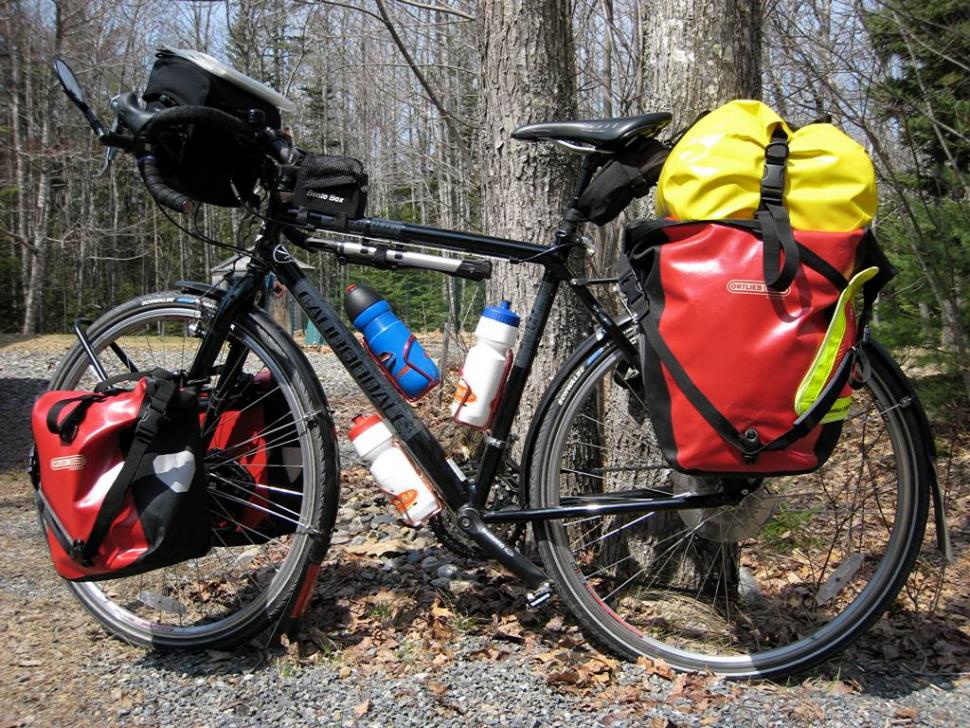 Many features of touring bikes serve the objective of being able to carry lots of stuff without too much fuss. That means you should expect to find at least a rear rack as standard on any touring bike, and preferably a front rack too.

The best place for a front rack is next to the wheel hub. Low rider racks have the least effect on the bike’s handling and spreading your luggage between the front and rear of the bike stops the front wheel from going light on climbs.

>>Read more: Your guide to racks and panniers — all your bike luggage possibilities from low riders to convertible backpacks 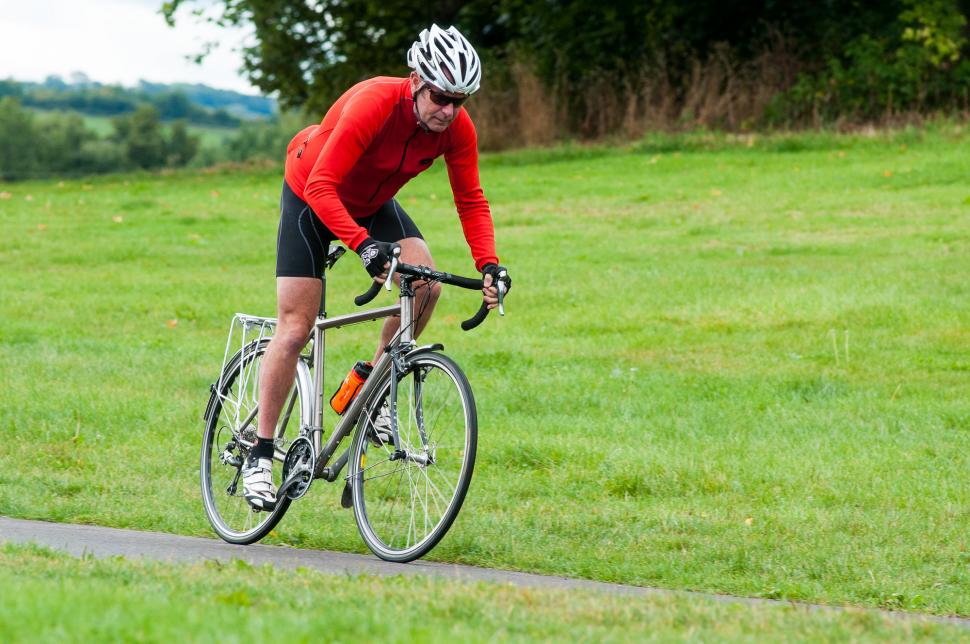 Touring bikes usually put you in a more upright position than most road bikes, as touring is more about looking round, enjoying the scenery and smelling the flowers than covering ground at great speed. That’s great for town riding too. Being able to sit up but still have your hands near the brakes means you can see that driver doing something stupid and react in time to save your bacon.

Because you’re sitting more upright on a touring bike, you might find you need a wider saddle because you’ll have more weight on your bum. That’s one reason why Brooks leather saddles are popular with tourists: they’re wide, as well as being top quality. 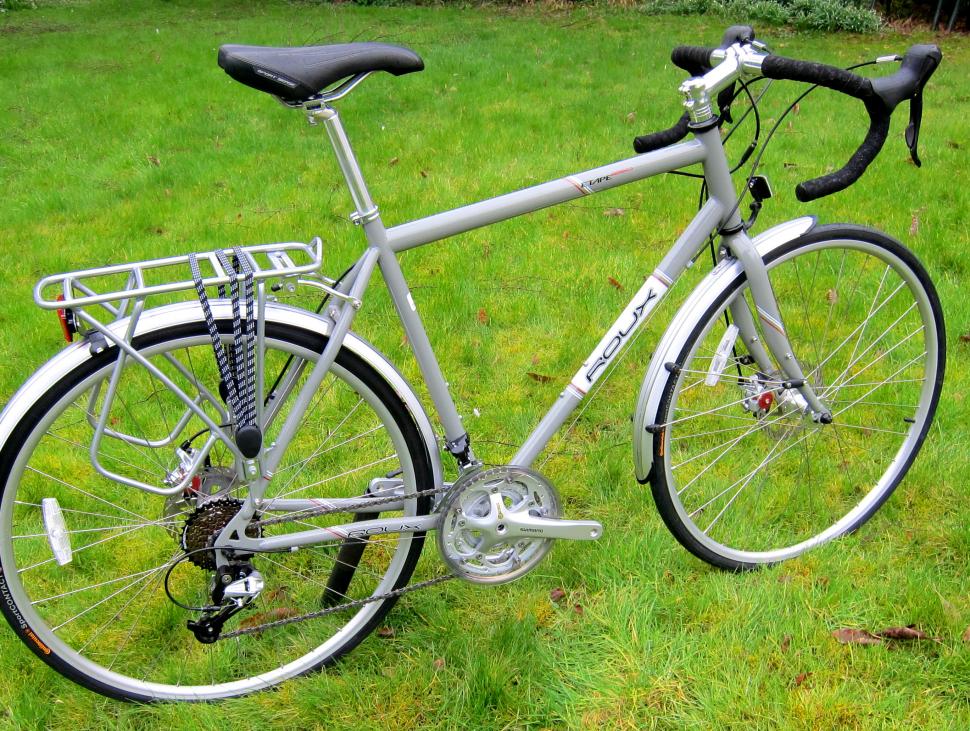 Touring frames can be made of any material, though carbon fibre is rare and steel is still prominent as a result of tradition and its ‘springy’ ride. Titanium is revered among well-heeled touring riders for its ride and durability. Inexpensive touring bikes tend to have aluminium frames, which have the rigidity that’s useful for load-carrying.

Whatever the material, the frame tubes will tend to be beefier than those on a racier bike, because durability and stiffness are more important than weight.

In terms of geometry, a touring bike frame has a shorter top tube for a more upright position, shallower head angle for steady handling and longer chainstays. That last detail moves the pannier rack away from the rider’s heels so there’s clearance for panniers without dangling them out the back of the bike where they can make the whole bike wag.

Touring bikes have plenty of attachment points for accessories. Mudguard and rack fittings are mandatory and you’ll often find extra water bottle bosses under the down tube where they can be used for an extra bottle or more load capacity. 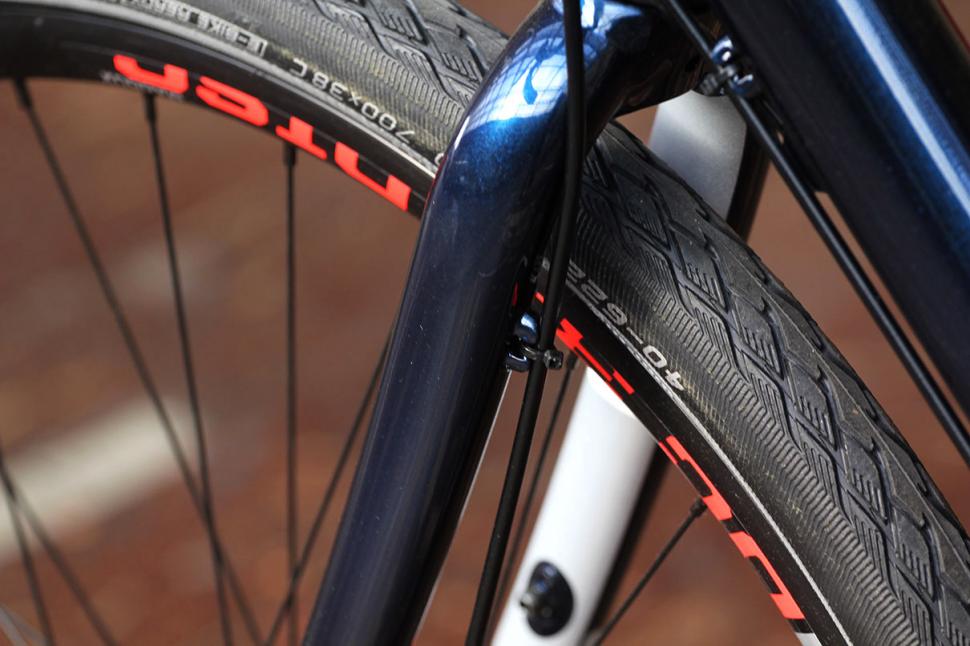 Wide tyres for comfort and traction on poor road surfaces

The need for both load-carrying ability and a comfortable ride means touring bikes tyres are wide. The minimum you’ll usually find is 32mm, but the new generation of adventure touring bikes often goes as fat as 45mm for dirt-road capability.

The need for grip on poor-quality, loose road surfaces means you’ll usually find a relatively deep tread pattern on touring bike tyres. Puncture resistant belts in tyres are common too; manhandling a fully-loaded bike to fix a flat is a bit of a pain. 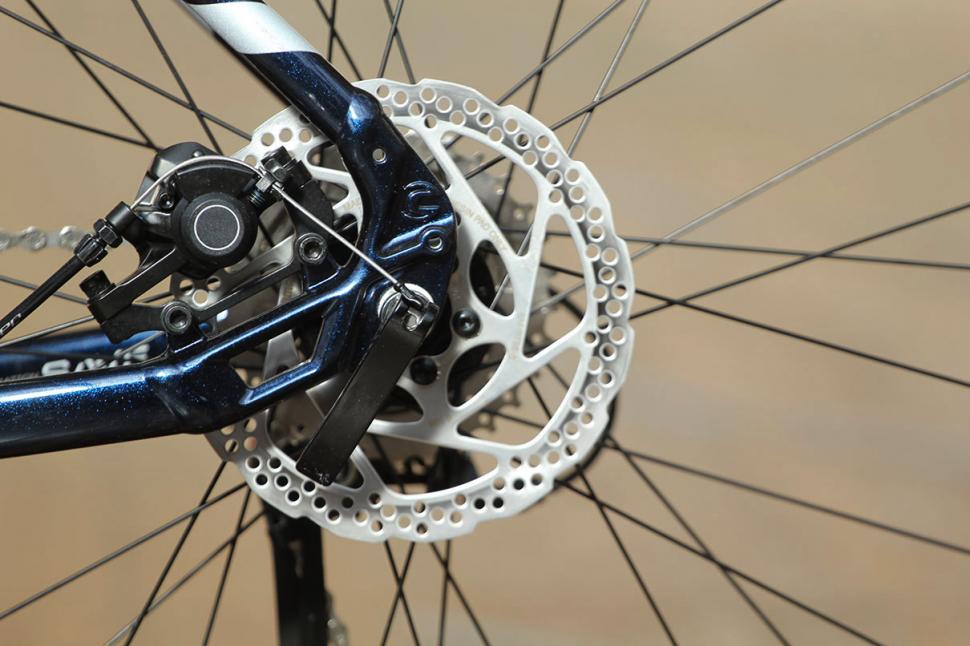 You’ll almost always find either cantilever brakes or discs on a touring bike. Side-pull brakes are rare because they don’t have the necessary reach to provide space for fat tyres and mudguards.

Disc brakes are becoming more and more common as the options available to manufacturers expand. They’re particularly suitable for touring bikes because they separate braking from the rims, improving stopping power and rim durability.

Forget weight; touring bike wheels need to be strong. High spoke counts are common (36 per wheel is traditional), as are wide rims. Many keen touring riders end up buying handbuilt wheels because off-the-peg options are limited or simply not up to the job.

The trend to wider rims of the last couple of years has improved the options for touring riders too, making wheels inherently stronger and stiffer. 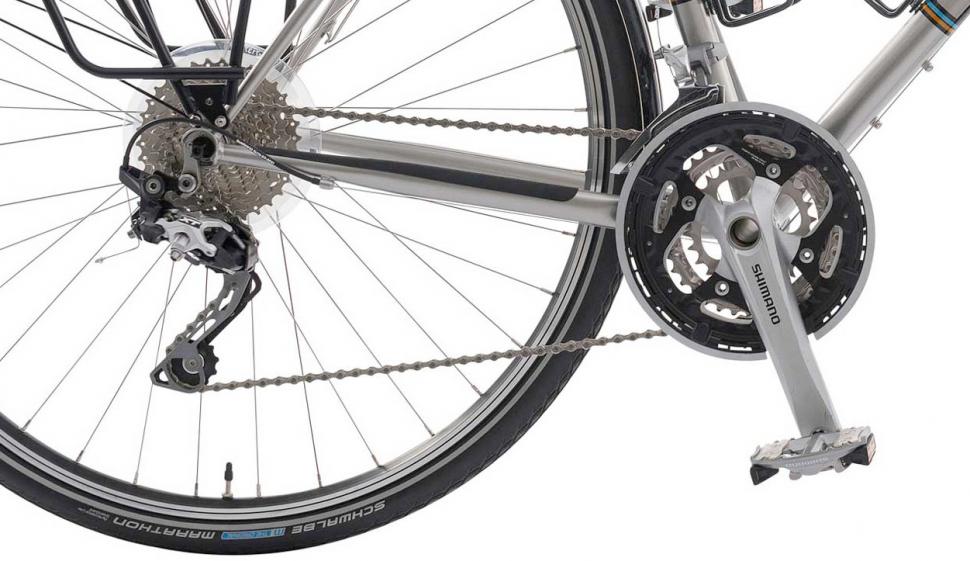 Carrying loads up hills requires low, low gears. It’s common to find a low gear below 1:1 on a touring bike, and tourers are almost the last drop-bar bikes that still commonly use triple chainsets.

Touring bikes often borrow components from mountain bikes and hybrids to provide the gear range needed for a touring bike. You’ll find chainsets with 48/38/28 chainrings and cassettes as wide as 11-36.

Gearing is another area where touring riders love to tinker. Many chainsets will take inner rings as low as 24 or even 22 teeth. Some tourists don’t see the need for high gears, so go for a 44-tooth big ring or even a ‘super-compact’ double such as 42/24.

Explore the complete archive of reviews of touring bikes on road.cc