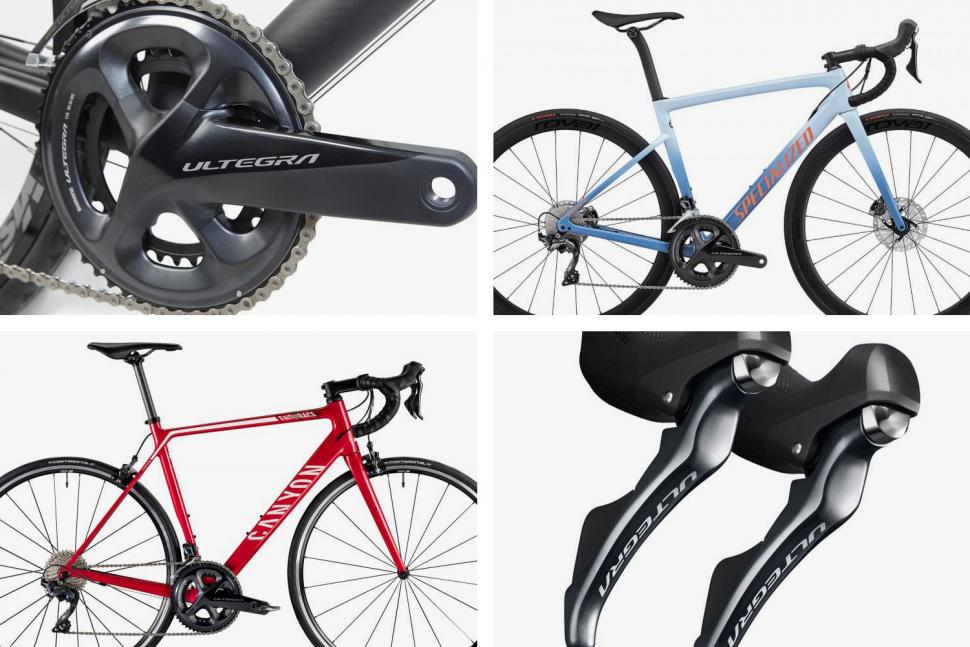 "I’m on Shimano Ultegra now," sang Half Man Half Biscuit, and you can be too with one of these bikes from £1,200 to £5,000
by David Arthur @davearthur

Welcome to the latest edition of road.cc’s buyer's guide to Shimano Ultegra-equipped road bikes in which you’ll find everything you need to know to find the right bike for you, plus our pick of 12 of the best bikes with Ultegra.

What are the key factors when choosing a new road bike? It might be price, purpose, style, weight, but for some, it might very well come down to what groupset the bike is equipped with. And one of the most popular groupsets is Shimano's Ultegra, a groupset that combines a competitive price with top-level performance.

Want to jump straight to our recommendations? Here they are:

Here, then, is a roundup of road bikes fitted with Shimano’s Ultegra groupset, and we’re going to focus on the mechanical version because it covers a wider range of prices. Shimano launched the latest R8000 version of Ultegra in 2017 and now all new Ultegra-specced bikes have swapped over to the new components. The new version is functionally very similar to 6800 but styled to look like its Dura-Ace big sister. 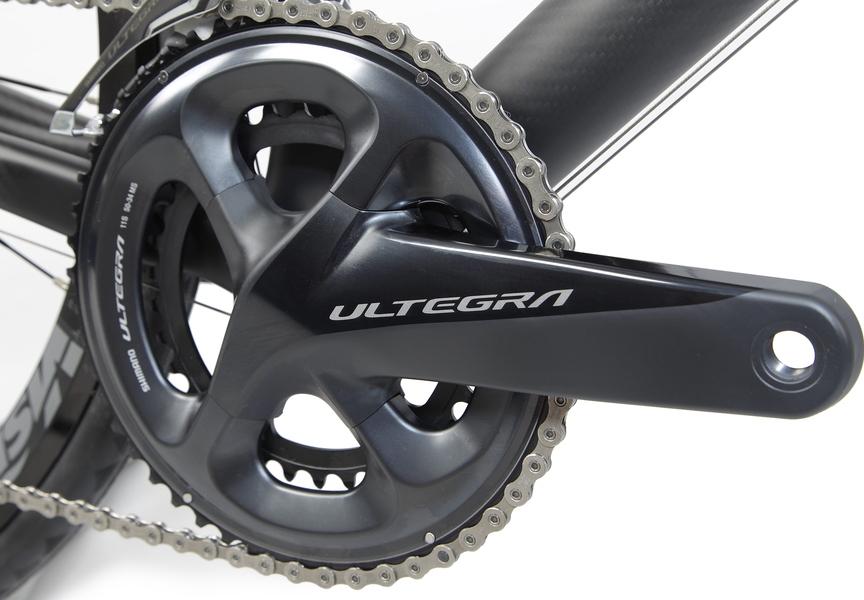 If you read Mat’s head to head feature, pitting Shimano Ultegra against its rival SRAM Force, you’ll know that Ultegra-equipped bikes can range in price from just over £1,000 right up to £3,000 or more. That means there’s a wide selection of bikes to choose from, with different frame materials and riding purpose, and a choice of disc brakes or aero frames.

Some bikes will feature a full Shimano Ultegra groupset, but at both extremes of the price spectrum, you’re going to find some manufacturers mixing in some other components to help them meet key price points. The most common changes are brake calipers, especially on cheaper models, and sometimes chainsets get swapped for another make. 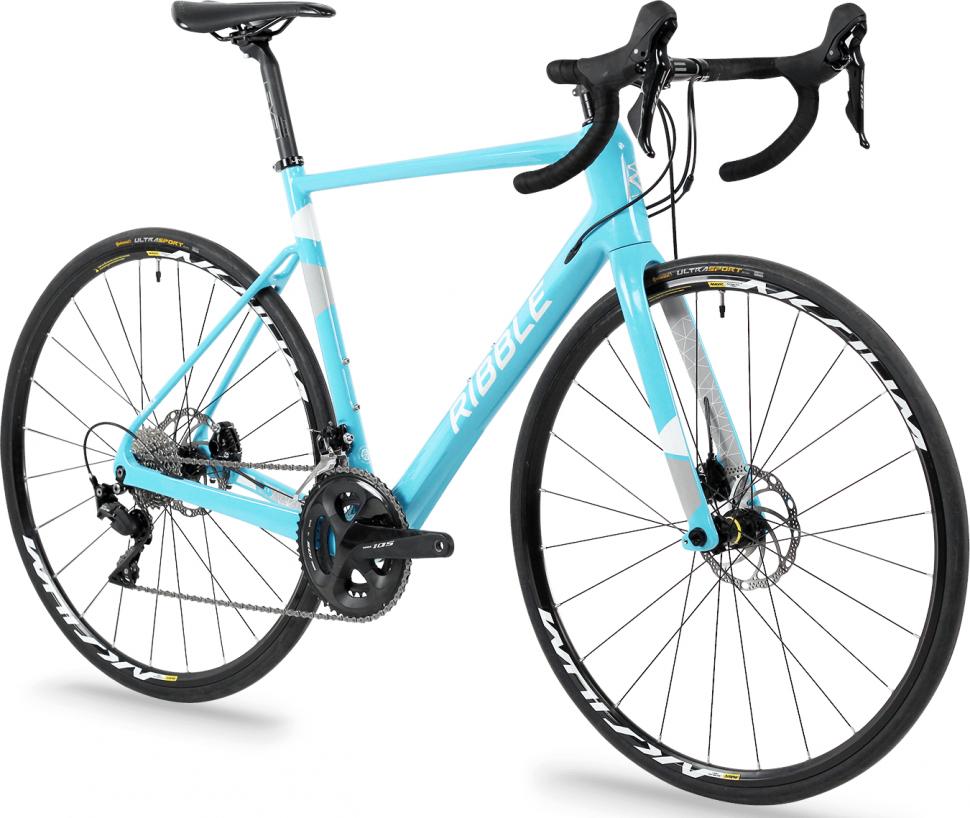 The Ribble R872 Disc is a carbon fibre road bike that's built to a sportive-friendly geometry and it offers a much higher performance than you've a right to expect at this price. Plus, there's the bonus that you can tweak the spec to suit your taste and budget.

The feature that surprised us most about the Ribble R872 Disc's ride is the front end stiffness. In this respect it feels like a bike costing way more than this. Haul on the alloy handlebar and everything is absolutely rock solid. You might not pull out your best Mark Cavendish sprint all that often but you'll appreciate the rigidity when climbing out of the saddle and also when cornering hard – you can really chuck this bike through the bends.

Read our review of the Ribble R872 Disc Tiagra 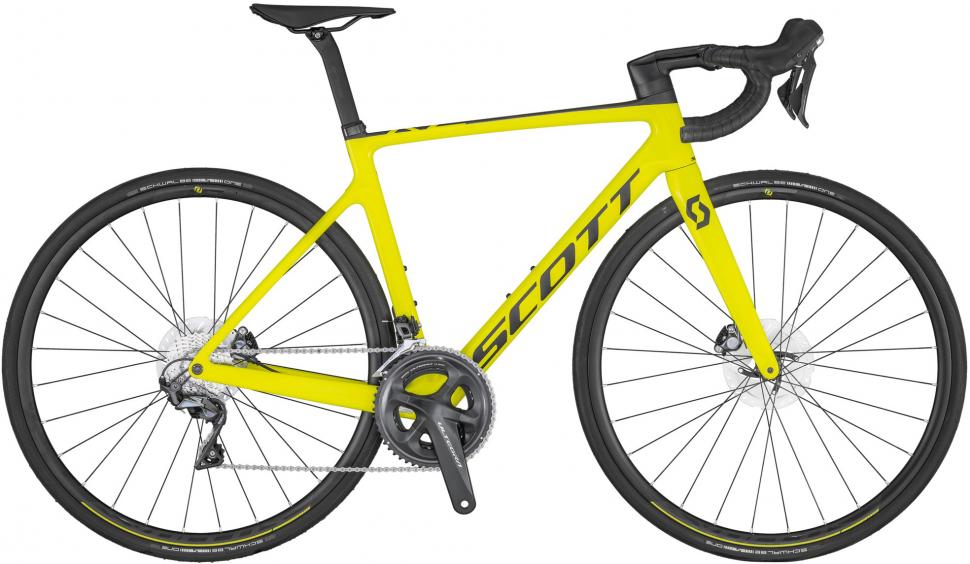 Scott's Addict RC is the company's offering for anyone who wants a full-on race bike whether you plan to actually pin on a number, or just like zooming through the countryside adding the whoosh of wheels and pedals to the soundscape.

The Addict RC 30 is built on the same Addict RC Disc HMX Carbon frame as the £6,300 Addict RC Pro, so what you're getting here is a pro-level frame with the Ultegra groupset to keep the price under control. There's a 52/36 chainset for all-out efforts and Scott's own Syncros handlebar and integrated stem for tidy lines. 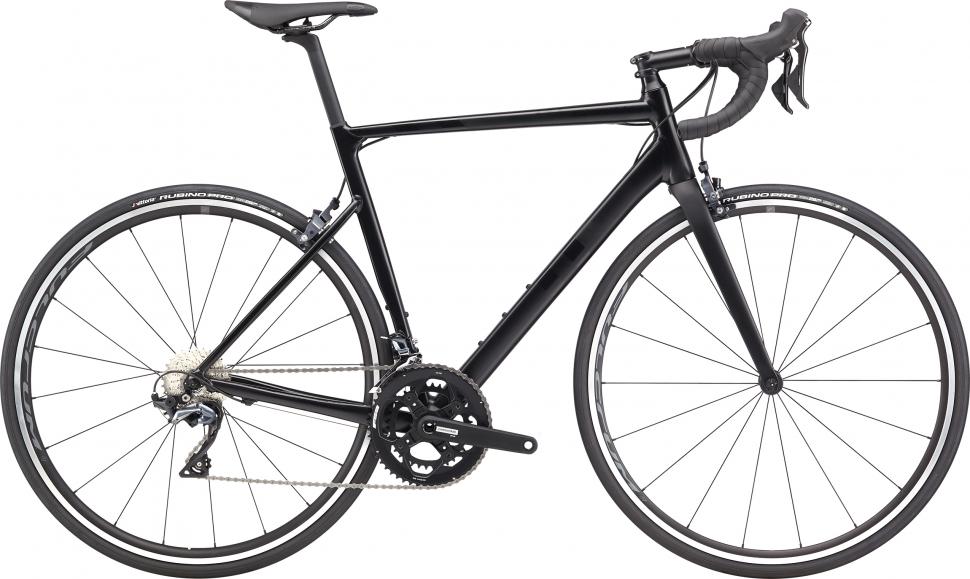 With the successor to the popular CAAD12 Cannondale haven't focused on shedding grams — a CAAD13 frame weighs about the same as a CAAD12 — but on ride quality. After a brief spin on the new bike at Cannondale's launch, David Arthur wrote: "in the CAAD13, Cannondale have produced a bike that is wonderfully smooth all-round. The Cotswolds isn’t generally known for its smooth roads, and over the crusty surface on some quieter country lanes, the CAAD13 blew me away with its ability to not just provide a smooth and calm ride, but to really close the gap to a carbon fibre bike."

This model complements the new frame with the Ultegra groupset for a bike that looks like a winning combination of performance and value. 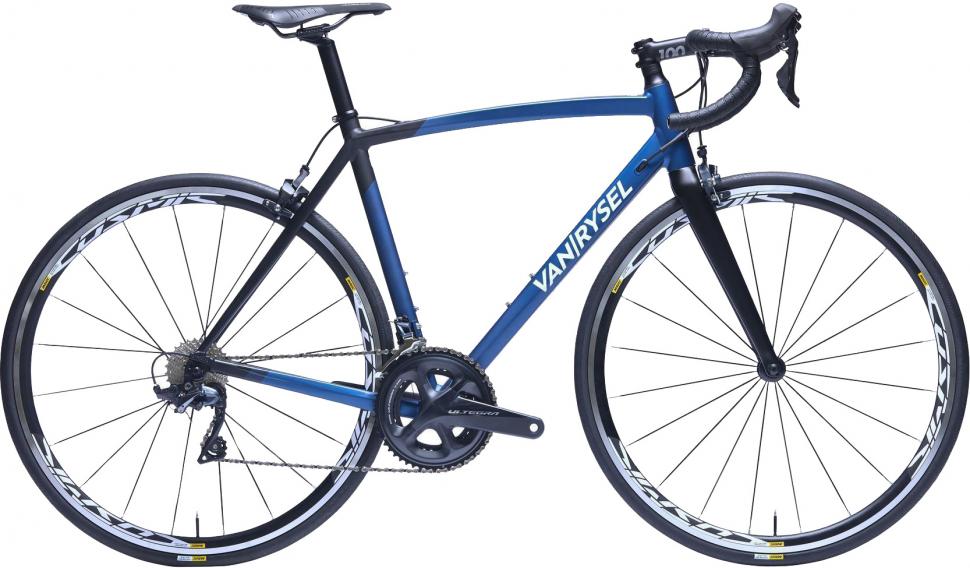 Going with an aluminium frame is one way to get maximum value for money. And with modern aluminium frames offering the great performance they do, it’s a choice we can wholeheartedly recommend. Decathlon’s Van Rysel RR 920 AF combines a triple butted aluminium frame with a direct mount front brake and internal cable routing, with a carbon fibre fork and a smart paint job. Best of all, it gets a full Shimano Ultegra 11-speed groupset, including the brakes and a 52/36 chainset. The wheels are Mavic’s Cosmic Elite with matching Yksion Comp 25mm tyres. German direct-sales brand Canyon has enjoyed a meteoric rise in popularity and sales in the UK, and it can always be counted on for providing very good value for money. The Endurace’s carbon fibre frameset is designed to offer a more upright and comfortable riding position than it’s racier Ultimate. You get a full Shimano Ultegra groupset with a compact chainset, along with DT Swiss P1800 wheels and a claimed bike weight of 7.5kg.

If you prefer a speedier ride, then the Canyon Aeroad CF SL 8.0 (£3,049) swaps the sportive frame for one designed in a wind tunnel and switches to deep-section wheels. It retains the identical groupset. It’s a good demonstration of how widely Ultegra is used in a bike manufacturer's range. 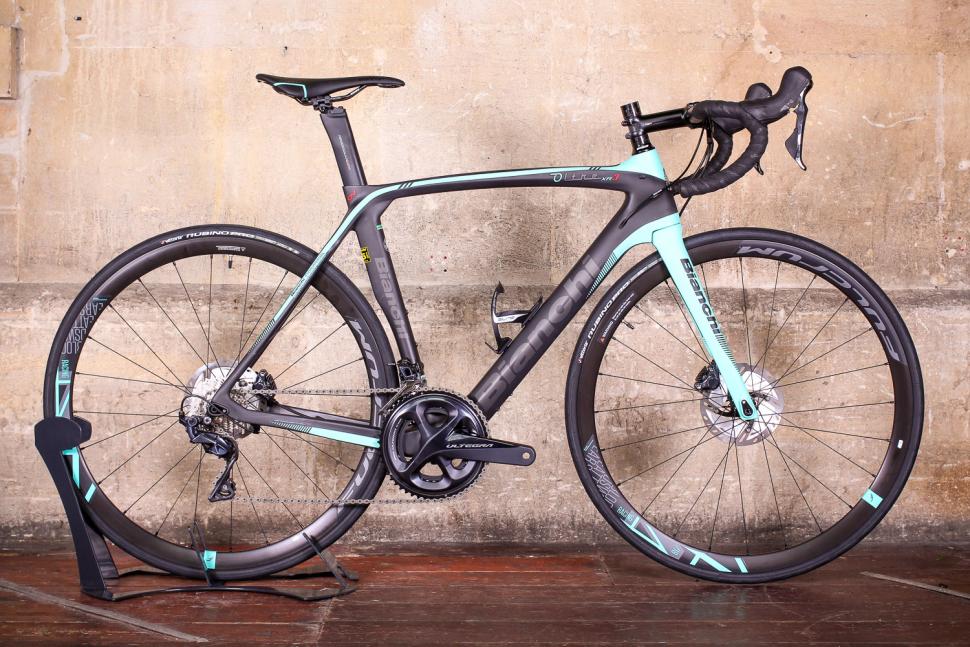 Some people say you should never put a Shimano groupset on an Italian frame. We say you should make up your own mind. The Bianchi Oltre XR3 draws inspiration from the company’s top-end race-ready Oltre XR4, but uses less expensive carbon fibre to hit lower price points. It’s a full Shimano Ultegra groupset too, including brakes. Wheels are Fulcrum’s Racing 7 LG shod with Vittoria Zaffiro Pro Slicks in 25mm width. Once he learned that this was a bike to be coaxed to speed not thrashed, tester Stu had a great time with it.

Read our review of the Bianchi Oltre XR3 Disc Ultegra 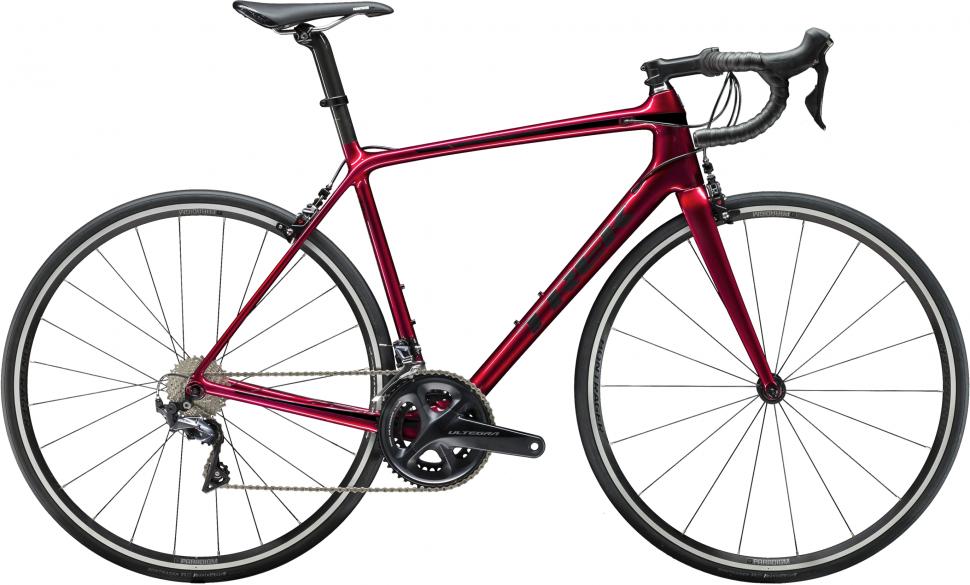 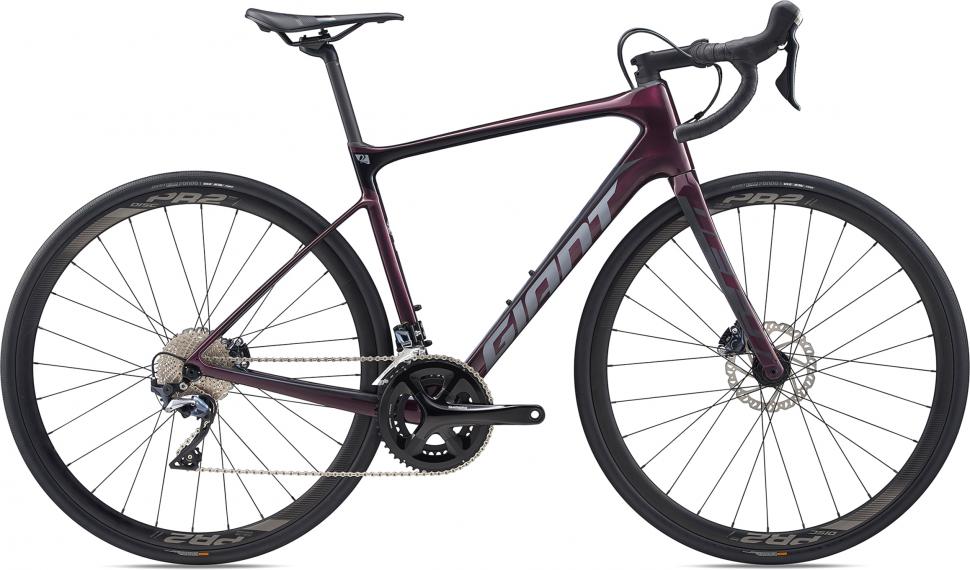 Maybe you’ve got your heart set on a road bike with disc brakes? Well, Giant has completely overhauled its Defy endurance/sportive model with disc brakes, and for its £2,199 RRP, the Defy Advanced 1 offers you a carbon fibre frameset, designed to provide a comfortable ride, with a Shimano Ultegra groupset. For 2017, Giant upgraded the brakes to Shimano hydraulics, a significant improvement over the previous mechanical discs, and that spec carries over for 2020. Giant supplies its own-brand finishing kit and tubeless wheels, along with 25mm tubeless tyres. Giant launched the Liv sub-brand to cater for women cyclists, and the Avail Advanced 1 shares many design features with the Defy, but the company says the carbon layup has been tuned specifically for women. As well as that, the geometry has also been adapted, and Giant has optimised the stem lengths, handlebar width and drop, crank arm lengths and brake lever reach across the size range. It’s similarly equipped, with a Shimano Ultegra 11-speed components and hydraulic disc brakes.

Looking for a bargain? There are still some 2019 versions round at substantially reduced prices. 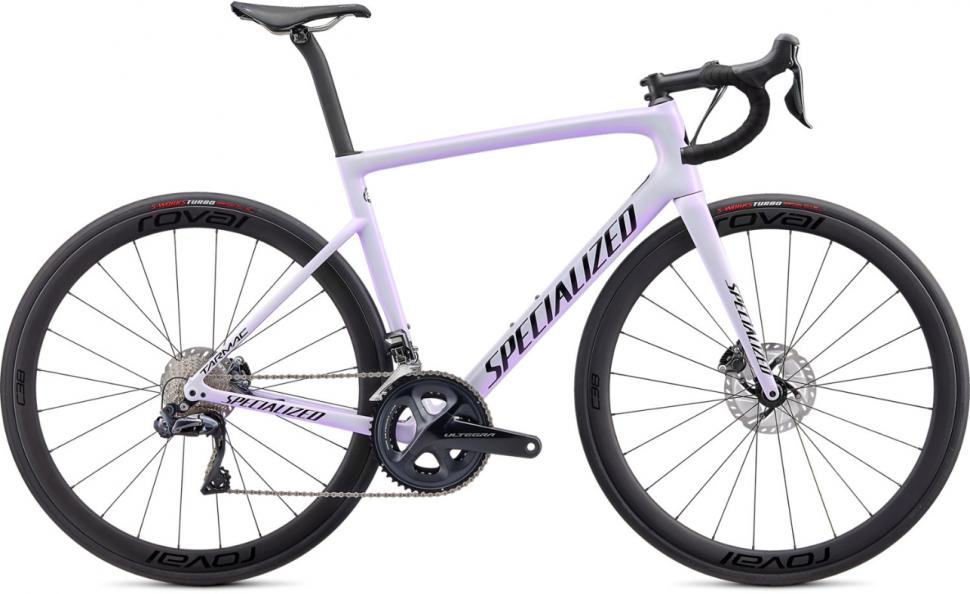 The women's version of the Specialized Tarmac received a rave road.cc review and the latest version is as good to ride as it is to look at if you've the money to spare. The latest version has the added stopping confidence of disc brakes. The Tarmac Disc has all the gubbins you'd expect for the money, including neat internally routed cables, a high grade full carbon frameset, tidy wheels and a super plush Oura Pro saddle. The brakes are direct mount, and you also get a set of the Specialized S-Works Turbo tyres in 26mm. The men's SL6 has an iridescent paint job and this is the only colour option for the women's version; but if you like it, then there are few finer Ultegra-equipped carbon race bikes than a Tarmac. We also recently reviewed the men's Tarmac Pro which has some Ultegra parts in there, and it's fair to say we were impressed.

The technically identical 2019 version can be had for quite a lot less, in limited sizes.

Read our review of the Specialized Tarmac SL6 Expert Women's 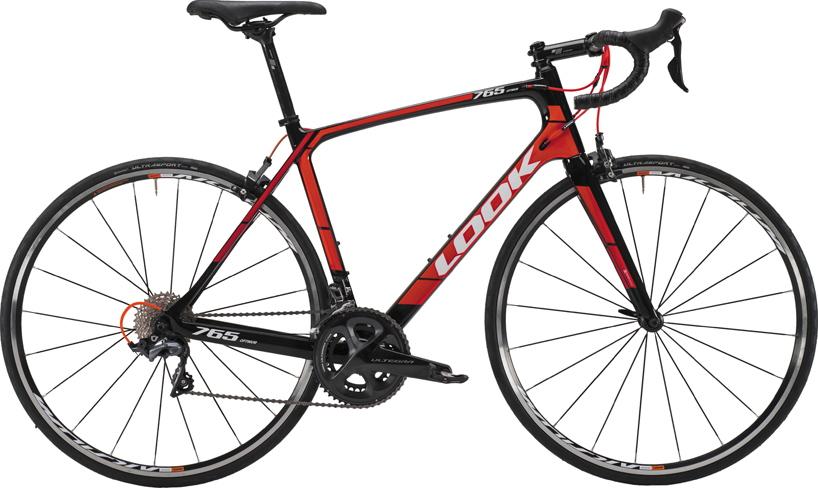 When we tested the Look 765, a sleek and stylish carbon fibre endurance bike, we were very impressed with its performance. Not all carbon frames are made equal: the Look designers have infused this frame with some linen fibres, which in key places (the fork legs and chainstays) is claimed to help dissipate nasty vibrations from ruining the ride quality. It appears to work, there’s very little road buzz through the saddle or handlebar when riding. This bike is finished with a full Shimano Ultegra groupset and the build is completed by way of some Mavic Aksium wheels and matching tyres, in a comfortable 25mm width.

Read our review of the Look 765 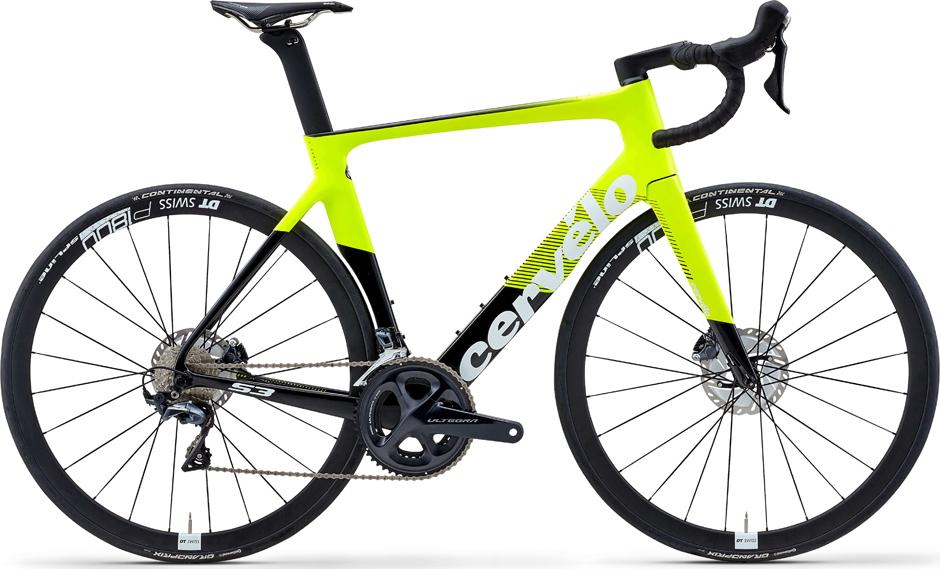 Cervelo's S3 might have been around since 2009, but it’s still regularly the choice of racers and professionals, and in 2013 it received an update so it's still a decent choice. It's a frame, reckoned by some to still be one of the most aero choices, that combines comfort with skinny rear stays, so you can have your aero cake and eat it.