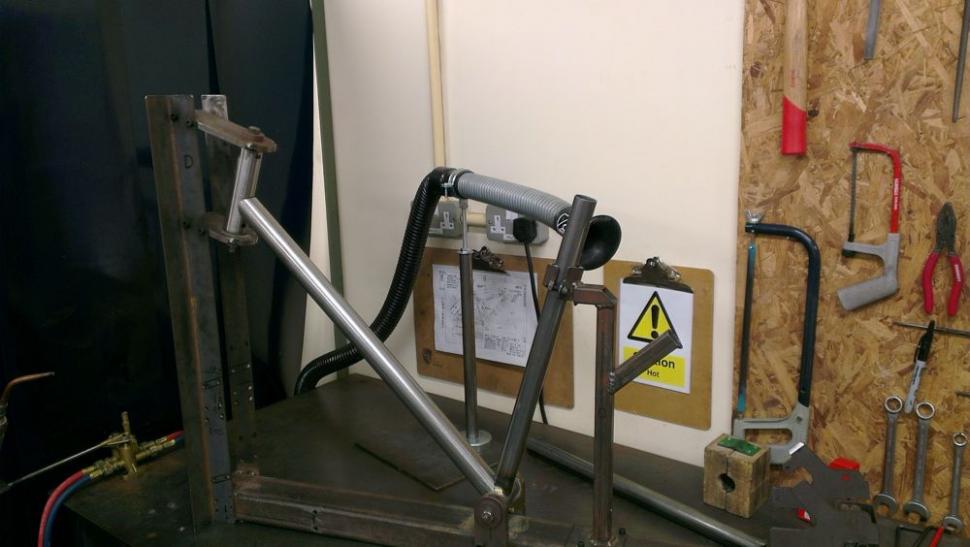 Consolidation, filing, tacking and dreams of my own frame

Second day, first injury. Although to be fair to The Bicycle Academy it's not their fault if I go down the local bike shop in the lunch hour to get some replacement brake blocks and then stick some scissors in my finger trying to cut the zip ties holding them to the backboard. Hey ho.

After the excitement of a first day learning something entirely new, day two is a day of consolidation, and graft. After all, this bike isn't going to build itself. The first job of the day was to start putting the bike together in the jig, checking the mitres cut yesterday to see if they were a perfect fit (clue: no) and adjusting them as necessary with judicious use of the array of files on offer. It's a bit-by-bit job, marking high spots with the Sharpie and gradually moving the tube into the correct position. Soon enough Chris tells me that he's 'happy' with the position of the down tube, which presumably means he doesn't want me to make it any worse.

The top tube is a simpler job and then suddenly it's in the jig and a recognisably bike-shaped object starts to take form. It's back to the torch to tack the individual members in position; there's no actual fillet brazing to be done today, although we do get to do a plumber's seal along the bottom of the seat tube to stop water migrating through the frame. Stays are next. They're pre-bent but we get given slightly over- or under-bent ones to cold-work into the correct shape. Then it's more mitre cutting and a slot in each chain stay at the back to seat it onto the solid-looking dropout. I was a bit over-zealous with the files at that point, but I think I got away with it; luckily there's plenty of steel in the TBA frame design, which is an adaptation of the World Bicycle Relief Buffalo Bike frame. Once the chain stays are tacked in place it really starts to look like a frame, and suddenly I'm excited about getting down to the business of brazing it all together. That's a job for the last day; tomorrow we'll be practicing some more and building a bottom bracket assembly which we can take home, "if we want". I do want. And that's not the only brazed-by-my-own-fair-hand thing I want. I'm dreaming of my own frame.

The skills you learn at The Bicycle Academy may not result in you walking out with a bike, like they would on some other frame building courses, but they do genuinely mean you're capable of making your own. This is ably demonstrated when Andrew shows us an email from former student and professional roadie Dan Craven, who's just finished building a 29er MTB with Robin Mather. "Robin was really impressed with what I could do," he says. Robin Mather. Was impressed. 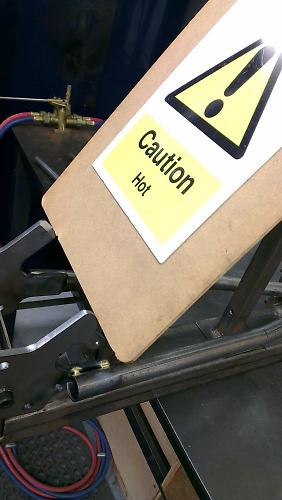 The workshop is gearing up to allow students to come back to work on their own projects; that's part of the deal. So, soon, will be the ability to gain a brazing qualification; that should be available in the new year to all new students, and people who've already completed their course will be able to come back and take the exam too. At the moment there's no adjustable jig for custom builds, just the fixed Africa bike ones, but that's on the list as well as expanding into more space. That will, at least, give them somewhere to put all the furniture and kit they've picked up from a local engineering firm that's just been bought out. "They're consolidating, and most of this stuff was just going to end up in the skip," Andrew tells us. Desks, cabinets, tools, gauges, stuff that would cost tens of thousands of pounds to buy new. It's good luck, and The Bicycle Academy deserves it.