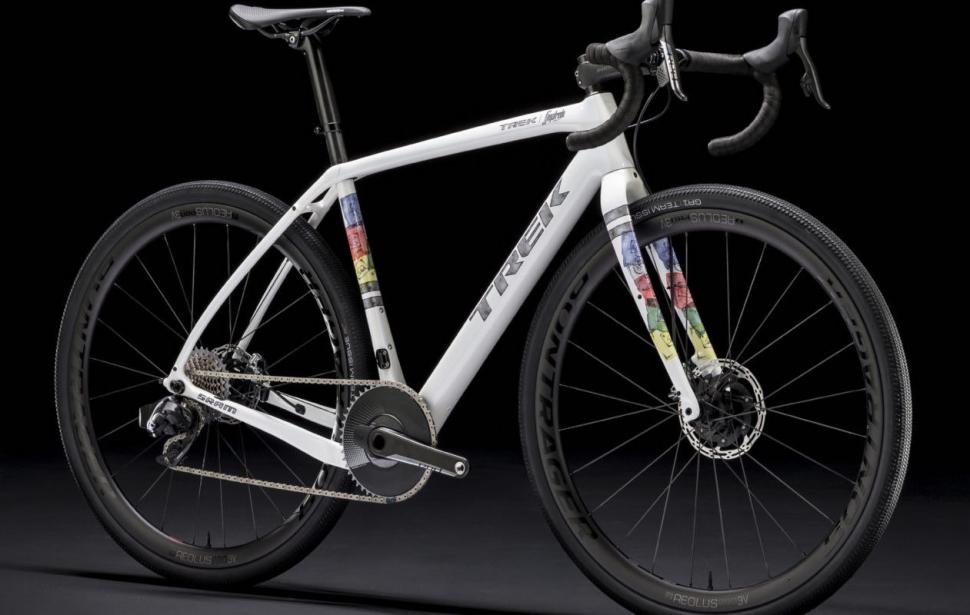 Among the 2,000 cyclists competing in the Dirty Kanza 200-mile gravel race this weekend, the premier event on the burgeoning gravel calendar, will be a handful of WorldTour riders including Trek-Segafredo’s Peter Stetina and Kiel Reijnen. They’ll be riding custom painted Trek Checkpoint SL gravel bikes.

A couple of weeks ago Peter Stetina won another popular US gravel race, Belgian Waffle Ride, only he did that on a Trek Madone aero race bike with the only change being some wider tyres. For the notoriously tough flint roads of the Dirty Kanza it’s perhaps wise to switch to a dedicated gravel bike with wider tyres. 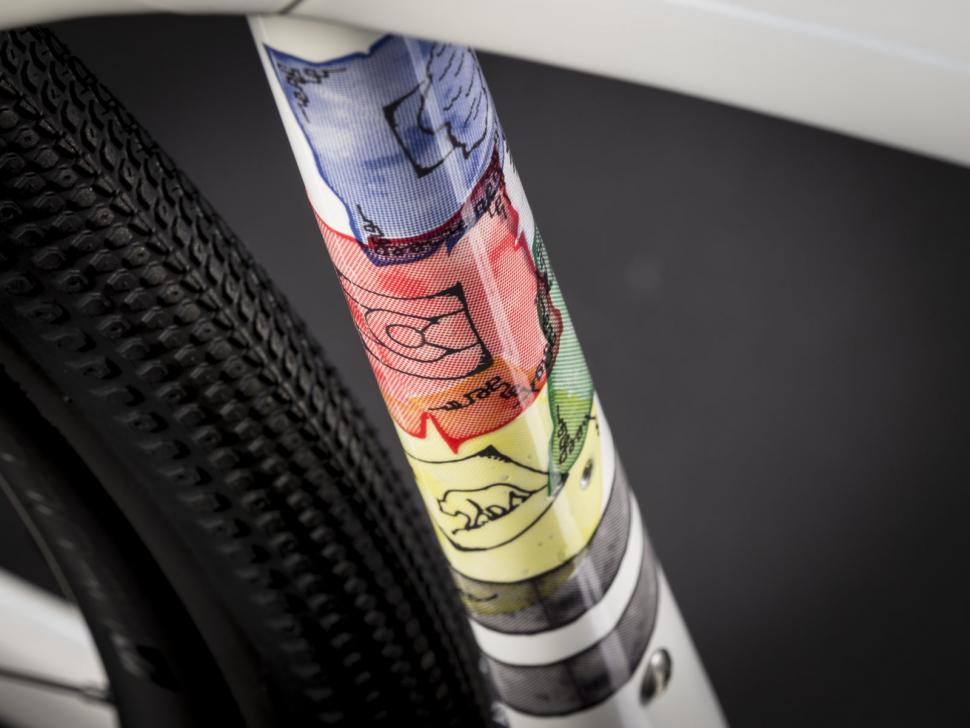 The Checkpoint is Trek’s gravel and adventure bike available at a wide range of prices and in a choice of aluminium or carbon frames, but naturally the two WorldTour riders will be using the highest-spec SL models made from OCLV carbon fibre and equipped with SRAM’s latest Red eTap AXS groupsets.

Each rider has opted for 1x drivetrains. They’ll be relying on the fluid damper in the rear mech to keep the chain from derailing as they don’t appear to be using a backup chainguide up front. We don’t have details on the gear ratios they’ll plump for come race day. 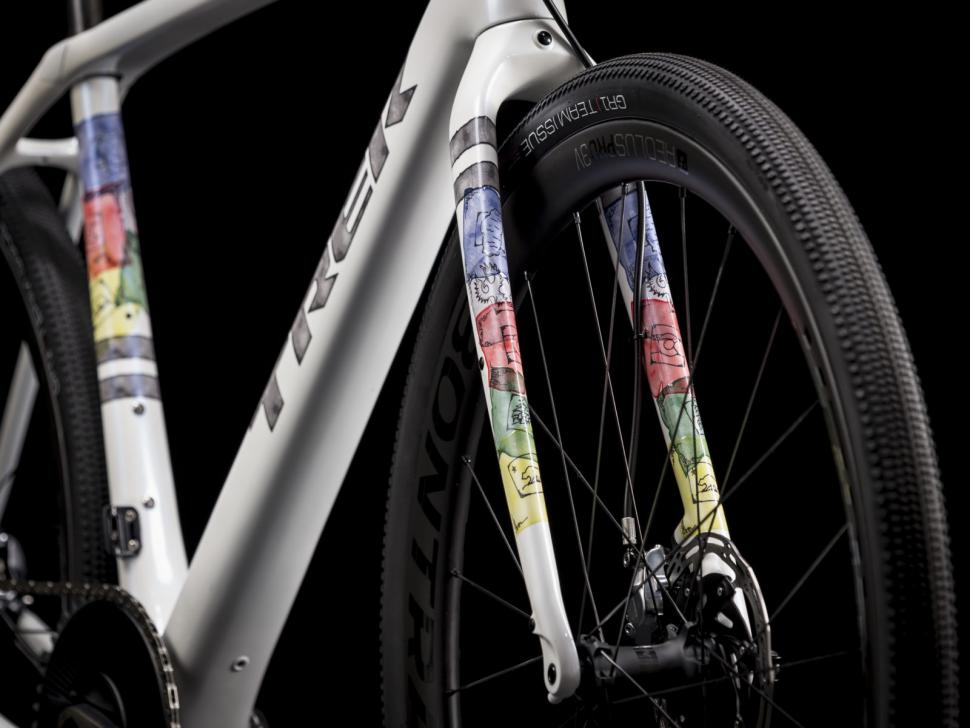 The biggest reason to switch to a gravel bike is wider tyre clearance. Both of these custom painted bikes will be specced with Bontrager’s new Aeolus Pro 3V carbon wheels and the Bontrager GR1 40mm tyre we tested late last year.

The rest of the finishing kit is all Bontrager branded kit chosen to suit fit requirements, which on Kiel Reijnen’s bike is a negative rise stem to get the bars low. As to the custom paint jobs, Kiel Reijnen has a paint job paying homage to his homeland of Bainbridge Island, Washington, and the Cowlitz Indian Tribe, of which he is a member. The colours have been chosen to reflect the landscapes so blues and greens with an illustration of a salmon from the tribe’s official symbol.

“I first fell in love with cycling while riding trails around the island where I grew up in the Pacific Northwest. The custom gravel bike Trek created for me isn't just the perfect bike to enjoy those trails again, it is a reminder to stay connected to my roots. Painted with Salish Sea artwork and the embroidery pattern from my Cowlitz tribe, this bike honours both my childhood and my ancestors. It will be a privilege to race it at Dirty Kanza,” says Kiel Reijnen. 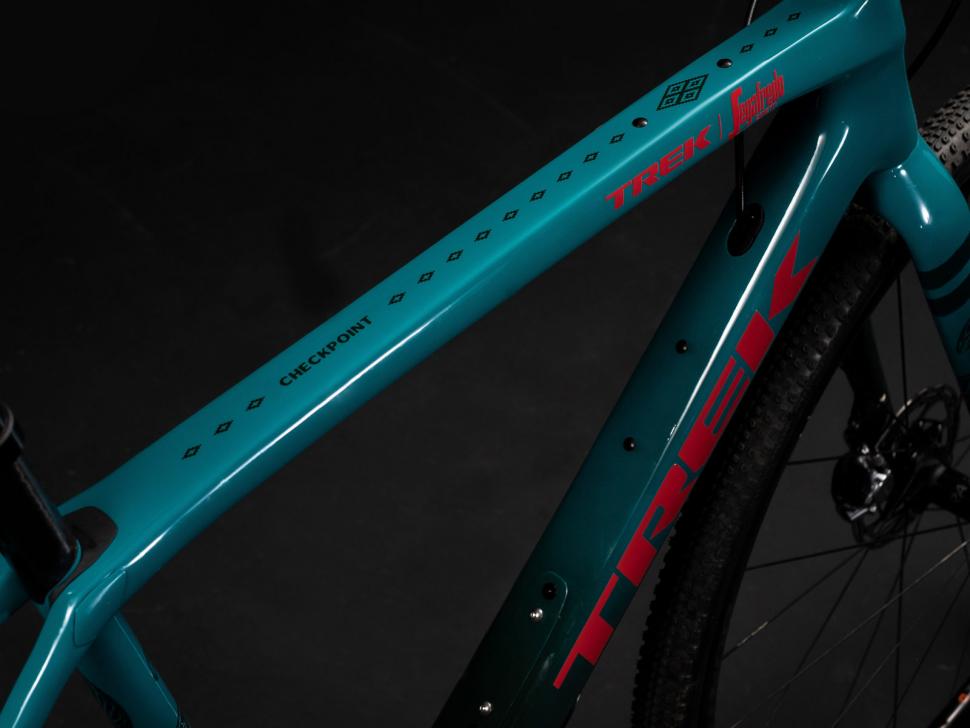 Peter Stetina’s custom painted Checkpoint features prayer flags encompassed with the flag of Colorado (for where he was born and raised), the flag of California (for where he lives), an outline of Lake Tahoe (his favorite training grounds), a hop flower for craft beer (one of Stetina’s passions), and a phoenix—a symbol that holds a special significance.

“I am in love with this Project One Checkpoint,” said Stetina. “Tibetan Prayer Flags have always had a place in my life, they are in my house and tattooed on my chest. The prayer flags are inscribed with important images of my life and the pearl white base is striking in the sunlight.

“The phoenix represents two things for me. It represents Santa Rosa, where I currently live, and its continuing recovery from the 2017 wildfires, as well as my own comeback from a smashed leg when everyone thought my career was over but Trek believed in me.”

- 22 of the best gravel & adventure bikes — super-versatile bikes that are at home on lanes, potholed streets and dirt roads

As well as these two Trek-Segafredo pros turning up to Dirty Kanza, EF Education First will be sending Alex Howes, Taylor Phinney and Lachlan Morton to the race, as part of their new race program that will also see them taking part in the KOM Challenge in Taiwan and apparently even the little old 3 Peaks Cyclo-Cross race here in the UK.

Will there be another aero bar controversy this time around I wonder? One thing is certain, it's set to be one hell of a race with these professional WorldTour riders taking part, but how will they cope without the support of a team car and bottles being handed up in an event that is all about being self-reliant?