Dave looks at the benefits of 1x13 hydraulic, why you should want it, and what bits of your bike you'll need to replace to fit it
by dave atkinson

We’ve already covered the Rotor 1x13 hydraulic groupset but now we’ve had some time to chat with the engineers on the project, and learn a little bit more about the system. So here’s a closer look at the system, why they’ve designed it the way they have, and which bits of your bike you’ll need to swap out to run it. 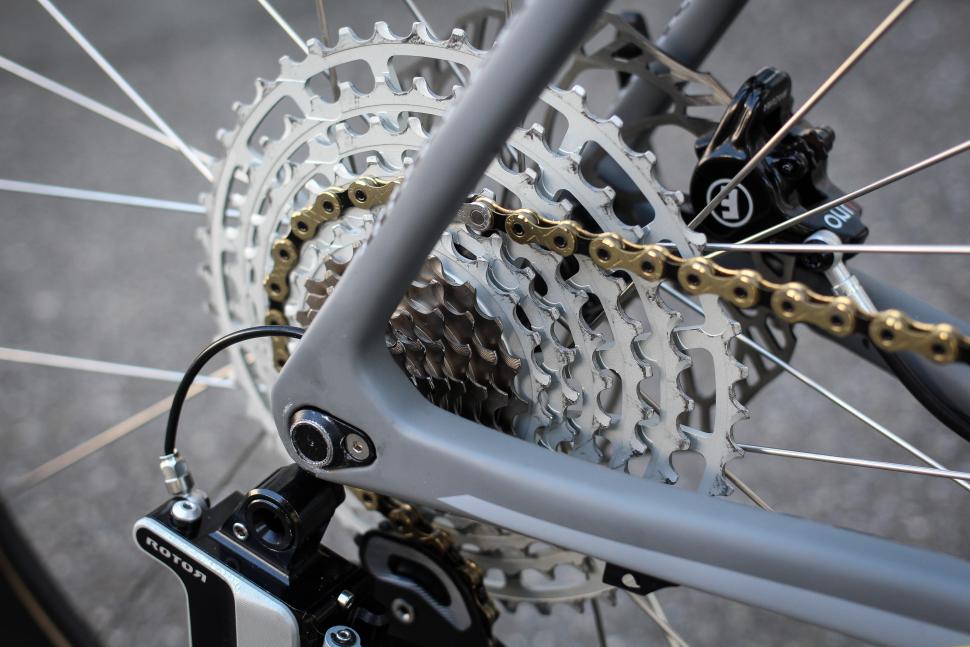 There’s been a lot of talk about single ring transmissions in road riding over the last few weeks. We’ve seen the launch of the new 3T Strada Due which has added double chainring compatibility to a bike that was designed for 1x; that means you can run the bike with any groupset (so long as it’s electronic), but in terms of aerodynamics it’s a retrograde step, as a 1x system cuts through the air more cleanly. So why the change? At least partly it’s in response to the Aqua Blue Sport team’s needs; an 11-speed cassette with a single ring doesn’t give the same range as a double unless you increase the gaps between the gears, and that means you sometimes fall out of your optimum cadence range.

A 2x11 system doesn’t have 22 gears. Well, okay, it does, but realistically you’re looking at 14 sequential gears, because you’re not going to be shifting up and down the rings at the front all the way through the middle of the cassette to get all the small steps. You’ll shift once from little ring to big, and that gives 14 ratios. 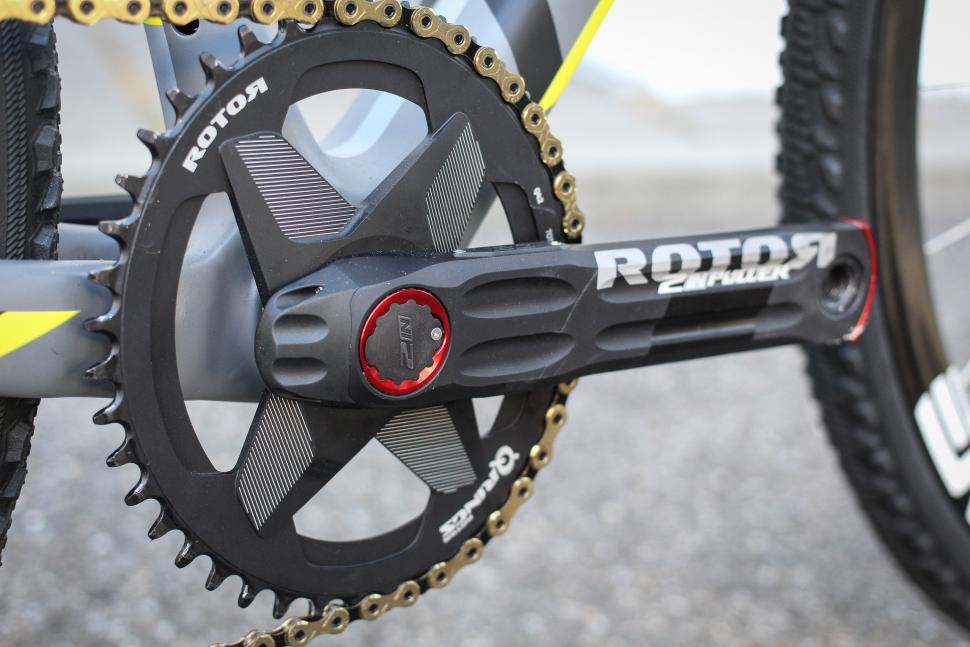 Rotor has been doing a lot of work looking at optimal cadence and speed, mining data from their professional athletes using their power meters. What they’ve discovered is that optimal cadence isn’t a rigid thing; instead it varies, with a narrower band in higher gear ratios and a wider spread as you get lower. The engineers showed us a lot of graphs, but the upshot is that with the correct 13-speed cassette you can cover all speeds, with the same spread of gears as a double, and keep the rider within the optimal cadence range the whole time. So there’s no downside, in terms of pedalling efficiency, to running 1x13 instead of 2x11. TO replace a 53/39 and 11-28 setup, you can run a 50T chainring and Rotor’s 10-36 cassette. For road riding Rotor is offering the 10-36 and a slightly wider ratio 10-39, which is more the equivalent of a compact double and a wider-range cassette. There’s a 10-46 which can be used for gravel or mountain biking, and a 10-52 for the widest range off-road. 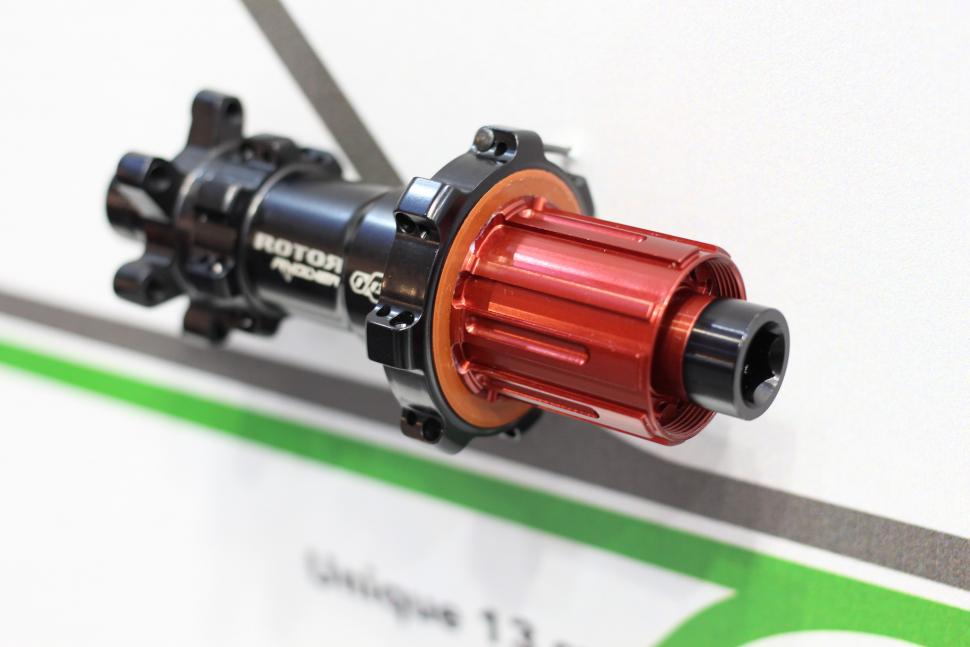 Will I need new wheels?

If you want to run 13 speeds at the rear, then you will. Rotor is using the standard open source spline pattern, the same as Shimano cassettes (except XTR), but it has been moved inboard by 3mm. That allows Rotor to use a new, two-part lockring and a 10-speed sprocket that sits outboard of the freehub. The cassettes are two-piece, with the bigger sprockets made from aluminium and the smaller ones from steel. The two bits are bolted together, but splines between the two sections transfer the torque. The cassette only contacts the splines near the outer edge of the freehub body, but the contact point is wide enough that there’s no danger of it digging into the alloy freehub. The cassettes are very light, with the 10-36 weighing just 240g. The 10-39 weighs 252g and the 10-46 is 273g.

The reduced dish of the wheel means that Rotor is only offering the new hub as a disc brake system, because they’re not convinced the final wheel would be stiff enough not to rub on rim brakes. Anyway, the Rotor Uno shift levers, which are repurposed for this new groupset (minus the left hand shift mechanism), are disc-only anyway. The new 13-speed hubs have a 2:1 spoke ratio on the rear (24 spokes with 16 on the drive side) to increase stiffness. 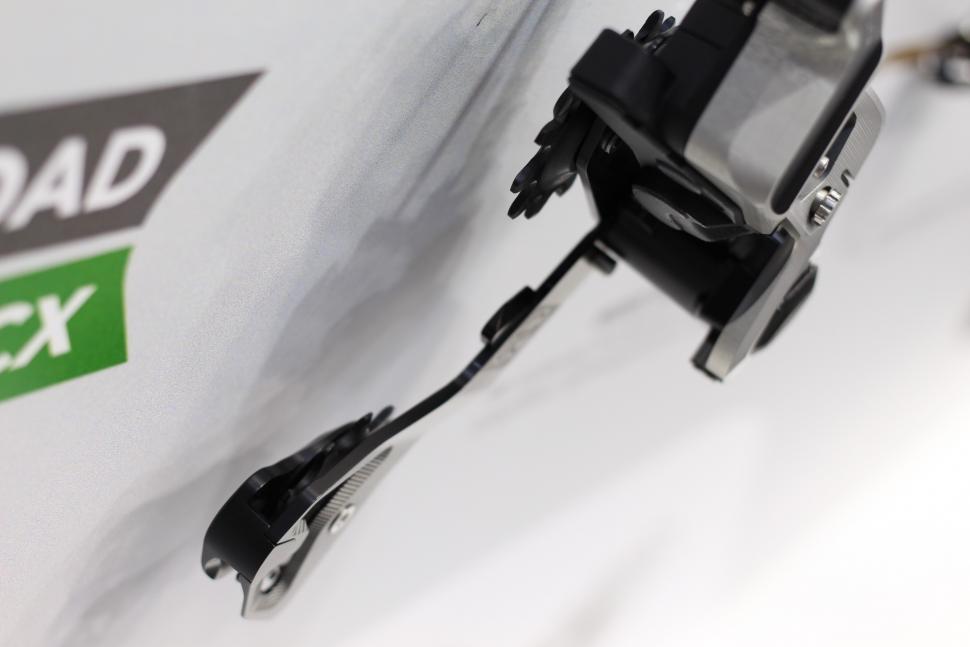 If you don’t want to buy new wheels then you can still run the new groupset, but only as a 12-speed system. The large sprockets are sufficiently big on all the cassettes that the biggest sprocket can be offset back towards the spokes, so in the same way that Shimano fitted their 11-speed mountain bike cassettes on to a 10-speed freehub, the 12-speed cassettes (with an 11-tooth smallest sprocket) fit onto a standard 11-speed road hub. A button on the rear mech switches from 13-speed to 12-speed operation. The chain, for both the 13-speed and 12-speed variants, is a standard 12-speed KMC chain. The sprockets use the same spacing as SRAM Eagle. Is the rear mech the same as Uno?

Well, it uses the same shifting technology, with a 3mm hydraulic hose. The indexing is all housed within the mech itself, so once the system is set up and bled, and correctly indexed, it shouldn’t ever move out of alignment. In that regard it’s similar to electronic groupsets. The hydraulic hose is indifferent to tortuous cable routing, so the route from the shifter to the rear mech should have no effect on shift performance.

The mech has been pretty radically designed, though. For a start it’s designed to work across all disciplines, so it needs to be tough enough to withstand the rigours of mountain biking. Gone is the open design of the Uno mech, with the new mech using a closed alloy body for better protection of the shifting mechanism from the elements, and from damage. The cage and parallelogram have been redesigned for the extra capacity needed; it’s just one cage length for all the different configurations. GIven that it has a 42T capacity for the 10-52 cassette, if you’re using the 10-36 cassette you should have no issues switching between chainrings if you need to.

Because it’s a single-ring system, and because it’s designed to be used off-road, Rotor has added a clutch system to the mech to keep the chain well-tensioned over rough terrain. There’s also a clever system that disengages the lower part of the cage to slacken the chain, making it easier to get a wheel in and out of the bike. A small button on the mech will dump the system into the highest gear, so there’s no need to click through all the ratios to get the mech in the best position to release the wheel.

The mech looks a lot chunkier than the Uno, so is the system a lot heavier? Well, Rotor was keen to point out that Uno was the lightest road groupset available, 150g lighter than Sram eTap. The new groupset is heavier, but in a 10-36 configuration it’s only heavier than Uno by about 30g, with the absence of the front mech offsetting the heavier rear mech and cassette. So, it’s still very light. And the 12-speed configuration is even lighter.

Well, 1x systems are more aerodynamic because the lack of front mech and double chainring cleans up the airflow around the bottom bracket. By the time you get to the position of the rear mech – at the back of the bike behind the rider’s leg – aero gains are less of a concern, so the bigger and more angular rear mech is unlikely to make much difference. Rotor wasn’t pushing the aero credentials of the new system particularly, but it’s unlikely to worse than the other top-level groupsets. 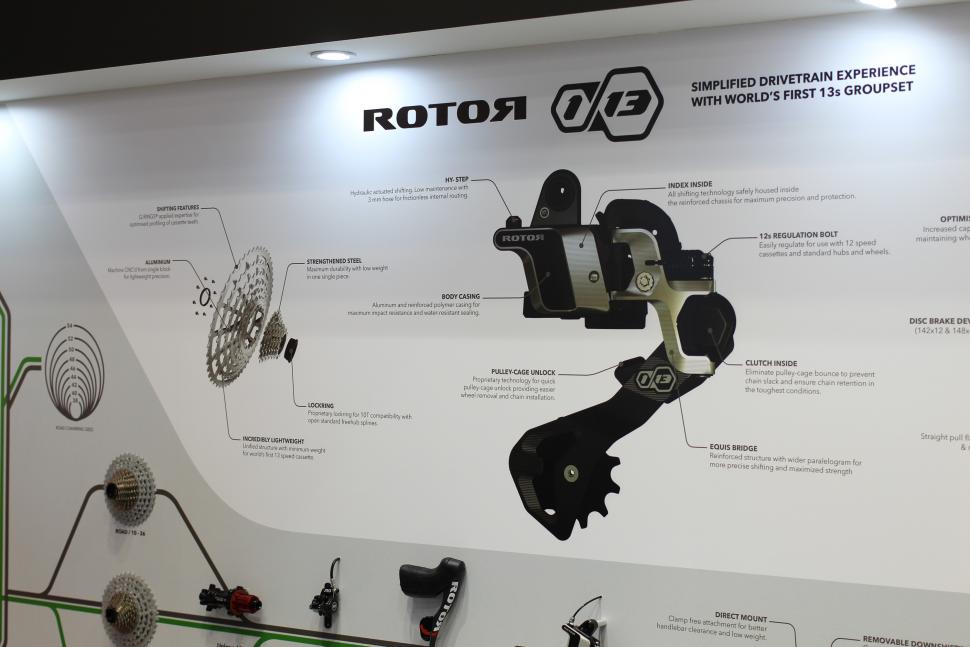 When will it be available?

Rotor is aiming to have the first systems available in the first quarter of 2019. The system it was showing at Eurobike looked pretty finished, albeit a bit rough around the edges. Like the Uno, Rotor will be producing the 1x13 system in their facility in Madrid.